NYPD Didn't Do Its Job in Case of German Student Killed by L Train: Family

MANHATTAN — On the day Kea Fiedler was fatally struck by a Brooklyn-bound L train in Union Square, she seemed to have her whole life ahead of her.

The 27-year-old graduate student had just come from an exciting meeting with her college adviser who gave her apples for a pie she hoped to make with her serious girlfriend on their weekend getaway in Beacon, N.Y. She was tired, but looking forward to watching the second presidential debate that night with her girlfriend and some other friends.

When Fiedler was hit by the train at about 4 p.m. on Oct. 19, a schizophrenic woman — who was later charged with another subway shoving death — approached police at the scene and told them that she had shoved Fiedler into the side of the train.

But after detaining and questioning the woman, Melanie Liverpool-Turner, police decided she was making the story up, concluding it was a suicide because "three witnesses stated they saw her jump into the tracks," NYPD spokeswoman Jessica McRorie said Monday. Liverpool-Turner fatally pushed another woman in front of an oncoming train weeks after Fiedler's death.

But sources have also said that detectives have softened their stance on Fiedler's suicide theory, after finding the witness evidence inconclusive. They are now considering that the scholar, who hails from Germany, may have fallen, sources said.

"We think the police should try to find out more details about everything. They made it very easy for themselves," Fiedler's sister, Jana Richers, 40, who lives in Germany, told DNAinfo New York.

Liverpool-Turner, 30, was at the scene of the subway fatality and immediately confessed to investigators, sources said.

"I pushed her. I push people in front of trains and I hear voices," Liverpool-Turner told them, according to sources. 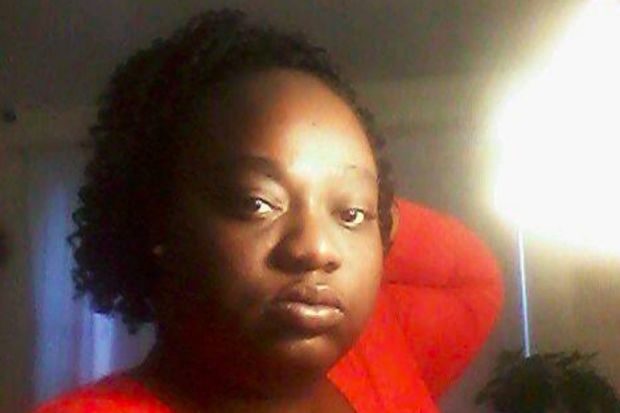 Melanie Liverpool-Turner was charged with second degree murder for pushing Connie Watton, a housekeeper from Queens, in front of a Midtown train, killing her. (Facebook)

Police took Liverpool-Turner to Bellevue Hospital for psychological evaluation, but let her go without charging her because eye-witnesses told police Fiedler had jumped in between two of the train's cars.

Liverpool-Turner was arrested 19 days later for fatally shoving Connie Watton before a 1 train in Times Square. She's being held at Rikers Island and due back in court for that case on Jan. 6, jail records show.

Her attorney, Mathew Mari, said he had heard his client had confessed to an earlier incident, but didn't know more details.

Yet investigators did not pursue Liverpool-Turner's confession any further, citing the witnesses on the platform who claimed that Fiedler had jumped, sources said.

Authorities also told reporters that they'd talked to Fiedler's parents who told them she was seeing a therapist over a personal issue, but her sister said no such call ever took place and that investigators never actually spoke to anyone in the family.

NYPD officials told DNAinfo on Monday that they communicated all information via the German consulate.

'I DON'T KNOW HOW THAT TRANSLATES TO SUICIDAL'

Relatives and friends said there was nothing to lead them to believe that Fiedler was depressed or in danger of taking her own life.

She was a policeman's daughter who grew up in Bremerhaven, Germany, a town of about 100,000 people and eventually earned several degrees including one from the London School of Economics, friends said. She moved to New York in 2014 to study with New School economics professor, David Howell, 65, who became a close academic advisor, he said.

She endeared herself to her colleagues, often taking time out of her day to help them with their own projects, and became a hub for a close circle of friends in the city, they said.

"She was extremely happy. She was very social. She was the ringleader. She introduced people to other people all the time. She was always initiating doing activities together," said Noah Allison, a classmate of Fiedler's who had become close enough to be her emergency contact.

Fiedler recently went through a breakup, but had overcome that by the latter half of 2016, family and friends said.

Then in June, Fiedler met Taylor Marvin, 27, through mutual friends and the two hit it off, eventually dating exclusively, Marvin said.

"She’s one of those rare people. She’s a good person. She was intelligent. She was excited about what she was doing. ... She just drew everyone to her. She was a very likable person," said Marvin, a product designer.

About this same time, Fiedler started seeing a therapist through The New School, friends and family said.

"I started seeing a therapist at the same time. We decided to do it to better our emotional intelligence. I don’t know how that translates to suicidal," Allison said.

Marvin never recalled any signs of trouble from her girlfriend, she said. In fact, the only time she can remember suicide ever coming up was during a conversation on a trip with some friends to Fire Island.

"Some of our friends had admitted to at some time in their lives to considering suicide. [Fiedler] just couldn’t understand it. The conversation lasted for a long time just because she couldn’t comprehend why somebody would go to that length," Marvin remembered.

"It just didn't seem like something she understood," Marvin said.

Experts said the plans someone makes can indicate whether they’re suicidal or not. Those who intend to kill themselves often settle their affairs, but are much less likely to set long term plans, according to Roy Lubit, a forensic psychiatrist.

“If I had a patient who had plans for something and just canceled it, that would scare me. A person making plans is the first things you look for. Someone who is making plans to do stuff is not likely to kill themselves a few minutes later,” Lubit said.

Fiedler talked to her sister shortly before she died. They chatted about flights home for Christmas. Fiedler mentioned wanting to spend a special day with her dad as a kind of birthday present for him, her sister said.

Fiedler and Marvin had an Airbnb reservation in Beacon on Oct. 21, one in a series of trips they had planned together, Marvin said. They were going to visit Storm King, decorate pumpkins and make apple pie, she said.

On the day she died, Fiedler met with Howell in his Greenwich Village office to go over data from the German government for her dissertation. Howell gave her some apples from his community garden to use to make her pie before she left about 3:30 p.m. and headed to Union Square, he said.

She planned to meet Marvin at home and the two were going to go to a watch party for the second presidential debate, Marvin said.

"It was a really good day for her and that night was supposed to be about celebrating a bunch of things as well as watching the debate with a bunch of friends," Marvin said.

Marvin stopped getting texts from her girlfriend about 4 p.m., she said. She had to pass through Union Square on her way to meet Fiedler, but couldn’t get on the L and noticed a large police presence and didn’t think much of it, she said.

It wasn’t until later, after an increasingly frantic search for Fiedler, that Marvin learned that she’d passed right by the scene of her girlfriend’s death.

Two officers met her at Fiedler’s apartment, she said.

"When they walked up, it was pretty shocking. I don’t remember too much from the rest of that night," Marvin said.

But Marvin does recall the officers asking a series of questions, all of which seemed to be premised on a theory that Fiedler killed herself out of sadness.

"They immediately started asking us if she was depressed. Of course, we were saying, ‘No, nothing like that.’ But it seemed like they already had that in their minds when they came to talk to us," Marvin said.

They seemed "fixated" on whether Fiedler saw a therapist, and though she did, Marvin tried to argue that it was common among her and her friends to do so "for general well being," she said.

"It’s not due to any sort of depression or anything. They didn’t seem to want to hear that," Marvin said.

Allison and Marvin identified Fiedler's body at the morgue, and she was sent back to Germany where she was laid to rest, they said.

Now, those who loved Fiedler are left with little more than questions.

"She was the center of our group of friends. It feels pretty empty now without her," Marvin said.

Efforts to pry information from investigators have been in vain. The lead investigator relayed information about witnesses on the platform to Richers through the German Consulate, she said. He emailed her once on Oct. 27, but hasn't responded to her calls or emails since, the sister added.

One friend in New York, who is also from Germany and was asked by the family to help, has repeatedly tried to call the lead investigator only to be told he's busy with training, she said.

So, Fiedler's family remains stuck across the Atlantic from any answers and the people who could give them, they said.

"We are so far away from NYC and also physically and psychologically unable to do anything," her sister said.

"Maybe she got sick, maybe she was inattentive or someone pushed her. I'm afraid that we will never get the answer of this question."