How many roads must a man walk down before you can call him a New Yorker?

For singer-songwriter and now Nobel Prize-winner Bob Dylan, it's basically the one road: MacDougal Street in Greenwich Village.

Though his mark was made through the Village and other parts of the city, on that thoroughfare in the 1960s and '70s Dylan performed his music, met his peers, drank with his friends and made his home.

Using our map, you can follow the path that Dylan, a Minnesota native named Thursday as the first musician to ever win the Nobel Prize in Literature, took decades ago through the city that launched his career:

"He asked me what I did and I told him I sang, played guitar and harmonica," the singer wrote in his 2004 memoir "Chronicles: Volume 1." "He asked me to play something. After about a minute, he said I could play harmonica with him during his sets. I was ecstatic. At least it was a place to stay out of the cold. This was good."

Club founder Manny Roth took a liking to the young performer, making him a regular on the afternoon shift.

A newly minted New Yorker, Dylan briefly lived on the fourth floor of One Sheridan Square with folk den mother Miki Isaacson's other strays. Under that roof he met his future girlfriend Suze Rotolo, who lived with her mother one floor below.

Dylan moved into his first New York City apartment with Rotolo in 1961, shortly after recording his first album. (Rent was $60 a month, if you can imagine that.) The cover of that record, "The Freewheelin' Bob Dylan," was shot around the corner on Jones Street between West Fourth and Bleecker Streets. The photograph shows Dylan trudging down the snow-covered block, with Rotolo hanging onto his arm. 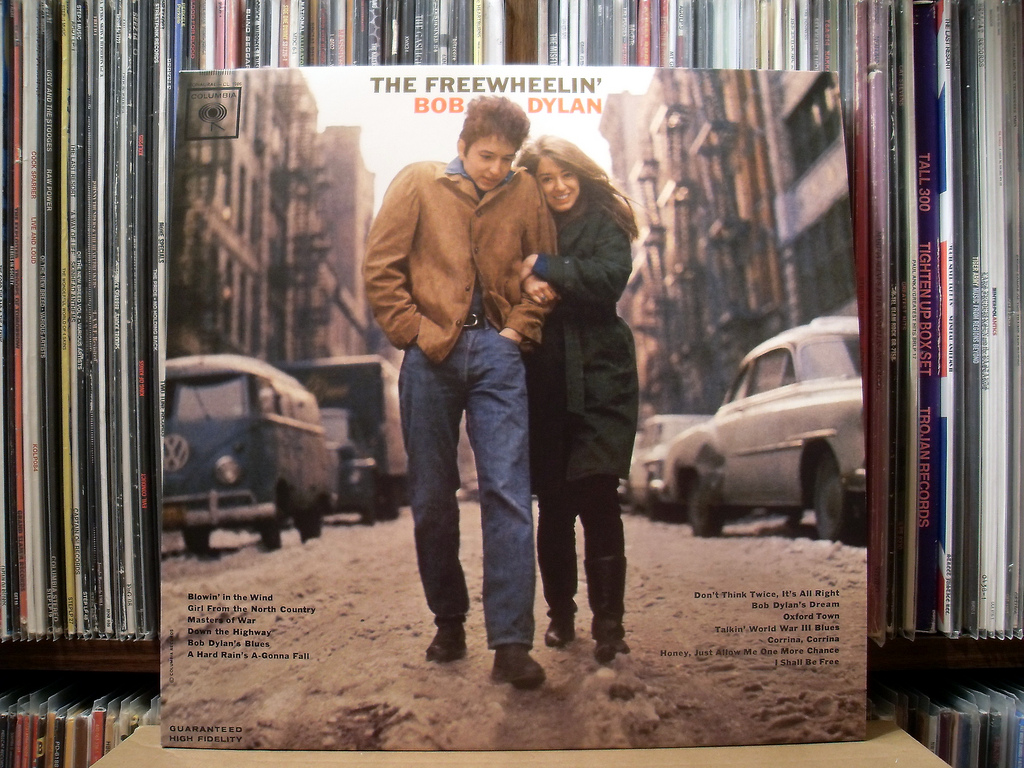 Dylan and Rotolo frequented this pub, where they listened to the Clancy Brothers sing rousing Irish rebel songs.

Dylan performed early gigs at the Gaslight Cafe. After shows, performers headed to the bar upstairs, Kettle of Fish.

Various accounts maintain that Dylan wrote "Blowin' in the Wind" at this cafe and theater, which made way for a Mexican restaurant in the 1970s. According to the late folk singer David Blue, Blue and Dylan had been drinking coffee at the Commons when Dylan started scribbling and strumming the beginnings of a song that ultimately became an anthem for the anti-war and civil rights movements of the 1960s.

Israel "Izzy" Young's book and music shop was the epicenter of the New York City folk music scene in the 1960s. In "Chronicles," Dylan writes about spending hours there reading books and listening to recordings. Young introduced the folk singer to influential peers like Dave Van Ronk and arranged for his first proper concert uptown, at Carnegie Chapter Hall on Nov. 4, 1961.

A 1963 performance of Bertholt Brecht's "The Threepenny Opera" at this playhouse now called the Lucille Lortel Theater changed Dylan's songwriting forever, according to his autobiography: "In a few year's time, I'd write and sing songs like 'It's Alright Ma (I'm Only Bleeding),' 'Mr. Tambourine Man,' 'Lonesome Death of Hattie Carroll,' 'Who Killed Davey Moore,' 'Only a Pawn in Their Game,' 'A Hard Rain's A-Gonna Fall' and some others like that. If I hadn't gone to the Theatre de Lys and heard the ballad 'Pirate Jenny,' it might not have dawned on me to write them, that songs like these could be written."

On Aug. 28, 1964, Dylan and The Beatles met for the first time in a room at the Hotel Delmonico, introduced by journalist Al Aronowitz. As the story goes, Dylan introduced the band to marijuana for the first time, getting them very high and setting them on a quest to pursue serious artistry. Their pot guru went on to infuse rock music with folk's social conscience.

Dylan allegedly took an immediate dislike to pop artist Andy Warhol and his entourage of "phonies" upon first visiting Warhol's Factory studio in Midtown in 1965. Many suspect the lyrics of "Like a Rolling Stone" take a jab at the countercultural tastemaker and his perceived exploitation of wealthy muse Edie Sedgwick. Nonetheless, Dylan sat for one of Warhol's “screen tests,” a silent video parodying the Hollywood studio system.

Dylan made his way to Queens three times in the span of three years in the mid-1960s, the last time in 1965 shortly after he alienated his audience at the Newport Folk Festival with a set on the electric guitar. In Forest Hills, Dylan split his show in two — during the first half, he played his beloved folk material and in the second, his new rock explorations. The musician returned to Forest Hills for the first time in 51 years this past July.

In 1969, Dylan bought the townhouse at this address after a hiatus in Woodstock, New York, with his wife, Sara, and son, Jakob. He quickly regretted the decision: the neighborhood had already become a tourist destination, offering no privacy. The family relocated to Malibu, California.

Dylan recorded one of his biggest hits, "Like a Rolling Stone," at Columbia Record's New York headquarters on June 15, 1965.

A series of gigs at this club after the release of Dylan's 1975 album "Blood on the Tracks" launched an epic tour called the Thunder Rolling Revue. Along for the ride were musicians like guitarist Mick Ronson and folk singer Joan Baez.