Whodunnit: How Did a Crate With a Man’s Body Inside End Up at Bronx Marina?

Twitter Facebook Email More
James Michael Brannon was shot in the head and sealed in a crate under a boat at the Locust Point Marina, police said.
View Full Caption
DNAinfo/Trevor Kapp

THE BRONX — Here's what investigators know: A California man who went missing in 2004 was shot in the head. He was stuffed into a wooden crate about a decade ago and, this month, that box was found in the Throgs Neck marina.

But how the crate arrived at the marina, and who put it there, remains a mystery. Various people involved in this whodunnit have given conflicting stories about what they believe happened.

James Michael Brannon, 60, was discovered under a blue tarp inside the box last week. There were no arrests as of Tuesday afternoon, an NYPD spokesman said.

'IT WAS IN THE SAME SPOT'

Investigators initially believed that Brannon's death was tied to a 41-foot Marine Trader sailboat that used to be dry-docked near where he'd been found at Hammond's Cove Marina, at 140 Reynolds Ave.

A Polish immigrant and highly-skilled craftsman named Michael Szewczyk had been refurbishing the boat since he bought it in Maryland about 2006 until he died of a heart attack at work in February 2015 at the age of 57, a friend of Szewczyk said.

Marina workers told NYPD detectives they first noticed the well-made wooden box near the 37-year-old boat between five and seven years ago and apparently thought nothing of it, law enforcement sources said.

"For two years, [the boat] was in the water, but for 11 years, it was on land. It was in the same spot. He was working on it. He was restoring it," said the owner of the nearby Ice House Cafe who also works at the marina.

Workers told investigators that it was definitely linked to Szewczyk's boat, especially since it was found in a spot 25 yards away from any other vessel.

Investigators got the impression that the box had also been there for some time, given the state of the dirt beneath it, sources said. It wasn't immediately clear how long, though.

The executor of Szewczyk's estate, his onetime employer and longtime friend John Adago, disputed that account. He said he never saw any box when he went to examine the boat after the handyman's death.

Adago also can't imagine the man he knew for 20 years would be responsible for such a gruesome crime, he said.

"That he would murder someone is certainly out of character and [he wouldn't] be dumb enough to leave the body hanging around for eight years and put it next to his boat," said Adago, owner and operator of Conscientious Construction, where Szewczyk worked.

The boat had been dry-docked between 2002 and 2013 before spending the next two years in the water, said marina staff who asked not to be named.

Hammond's Cove staff had pulled the boat out of the water and dry-docked it in spring 2015, Adago said.

"If there was a body sitting there, they were either climbing all over it or they moved it and put it back. It doesn't make any sense," Adago said. 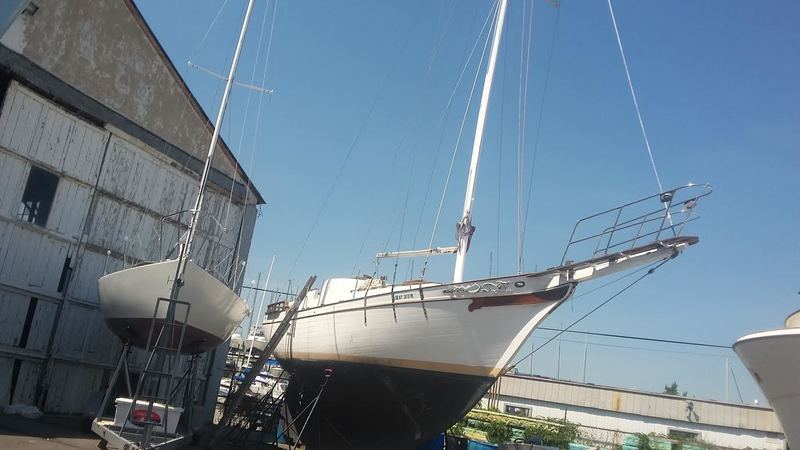 'HE DIDN'T KILL THIS GUY'

When Adago visited the marina on June 2, 2016, to examine the boat and take some photos of it, staff there told him they'd put a lien on the boat for storage fees and he had to pay before anything more could be done, he said.

He paid the fees on the boat and on June 21 it was moved to the Consolidated Yachts marina on City Island, he and sources said.

Adago did not see a box with Brannon's body, he said.

Had he seen it, he would've assumed it was more his old friend's property that he needed to investigate and address as part of his estate, he said.

Another friend of Szewczyk's longtime girlfriend who helped clean up the boat also told investigators that he never saw any box either, law enforcement sources said.

On top of that, Szewczyk never had any run-ins with the law, owned a gun or had any other brushes with trouble, as far as Adago knew.

Brannon and Szewczyk died under similarly lonesome circumstances, survived by only a single estranged blood relative.

Brannon's only living relative is his former Navy investigator brother in California named Thomas Brannon who tried in vain to track him down when he went missing in 2004. Two other brothers, a Marine and an Army veteran, are both dead as well.

"I'm the only one left," Thomas Brannon said.

Similarly, Szewczyk, who had a degree in aeronautical engineering, emigrated from Poland in the early 1980s, leaving behind a wife, according to court records.

Szewczyk had taken up with another woman in the early 1990s and tried starting a family, but she left him and took their 3-year-old daughter around the same time he started working for Adago in 1996, Adago said.

Szewczyk was Adago's foreman before trying to start his own business, which eventually failed and sent him back to his old worker as a subcontractor, Adago said.

"He's a very good craftsman, but the business was hard on him. He was a kind of surly Polish guy. One of the reasons his business didn't succeed: he had no charm. He didn't have very good bedside manner," Adago said.

Szewczyk eventually began living with a longtime girlfriend in a Jackson Heights apartment, but the two never married, records show.

When Szewczyk wasn't working, he split his time on two passion projects: refurbishing his sailboat and building a personal airplane in a Maspeth warehouse, those who knew him said. The titanium frame with its broad wings and wires is still there, Adago said.

"He was a loner. That's all I know about him. He kept to himself. He didn't make no trouble. He was a drinker," said a marina worker who declined to share his name.

All Szewczyk's relatives and his wife back in Poland had all died before his fatal heart attack in 2015, records show. His estranged daughter had to file paperwork to prove she was his heir to inherit any of his estate, records show.

Szewczyk's longtime girlfriend listed herself simply as "friend" in funeral documents that show his service was held with a rented oak casket that had a crepe interior.

With reporting by Kathleen Culliton and Katie Honan.

Orchard Beach Parking Should be $60 for the Summer Season, BP Diaz Says