CIVIC CENTER — Ocean's Eleven it was not.

A crew of Brooklyn robbers used brute force and blowtorches to cut holes in bank vaults in order to steal $5 million in cash and personal valuables during at least two bank heists this spring, federal and local authorities said.

Crew members Michael Mazzara, 44, Charles Kerrigan, 40, and Anthony Mascuzzio, 36, who were arrested Tuesday, cut alarm wires and telephone lines and then used acetylene tanks to torch through the metal walls of the banks in Borough Park and Maspeth, Queens, officials said. They made off with  hundreds of thousands of dollars in cash as well as family heirlooms like jewelry, diamonds, coins and stock certificates, according to court documents and investigators. 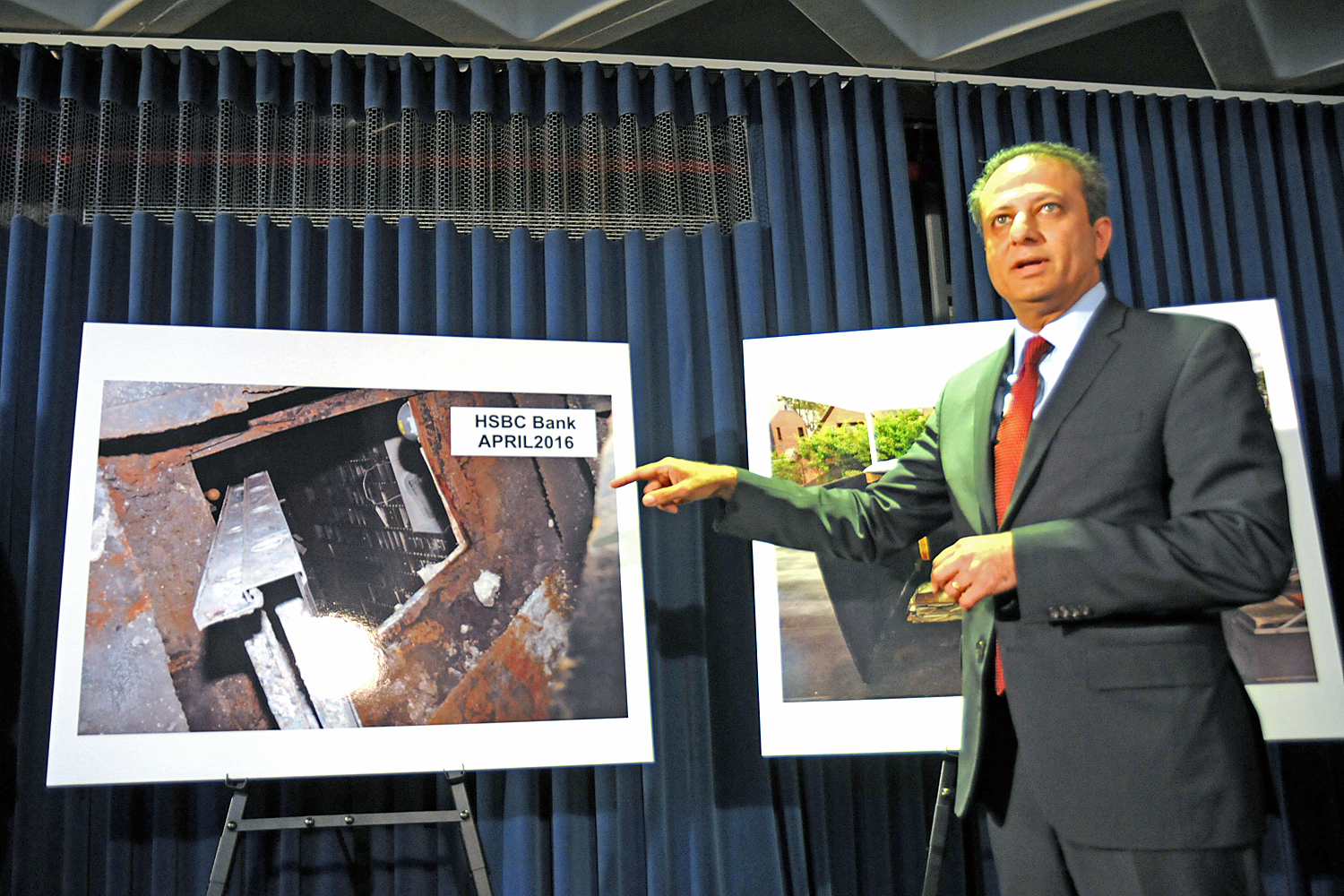 Preet Bharara explains how the crew torched through the roof of the Brooklyn bank. (DNAinfo/Ben Fractenberg)

"The thieves stole not just people’s money but memories too," Manhattan Federal Attorney Preet Bharara said during a press conference Tuesday. "What was left at the banks and on the roofs of the banks looks like something out of a scene of a movie."

Investigators first captured surveillance footage of the crew after they cut through the roof of an HSBC bank on 13th Avenue between 44th and 45th streets the weekend of April 8th.

The burglars first cut the alarm inside the bank building and nearby telephone wire before the bank closed on Friday.

They then pretended to be doing work at a next-door vacant building, pulling up in a black Honda Pilot with black rims that night and carrying a Shop-Vac into the building.

The crew torched through the roof and stole $330,000 in cash and valuables from safety deposit boxes, according to court papers.

A nearby surveillance camera caught Mazzara carrying a Shop-Vac and "heavy bags" out of the vacant storefront at 5:09 a.m. on April 10.

The crew struck again the weekend of May 20, again cutting through the roof of a Maspeth Federal Savings Bank on Woodhaven Boulevard after constructing a makeshift shack on top of the building to conceal their activities.

The alarm at the bank went off at about 1 a.m. on May 21 before the burglars were able to reset it, according to federal prosecutors, before going off again at 2 a.m. before they made their escape.

They made off with $290,000 in cash and about $4.3 million in valuables, including diamonds, jewelry and baseball cards, feds said.

Investigators were able to link the men together after getting license plate numbers from cars they drove and then tracking their purchases, including Mazzara buying four sheets of plywood, a gallon of black paint and black spray paint from a Brooklyn Home Depot on May 19, according to the U.S. Attorney's office.

Police then caught Mazzara on video painting the plywood black, which investigators said matched the makeshift structure on the bank roof.

Mascuzzio is the son of the late Anthony Mascuzzio, who was a friend of John Gotti before being fatally shot in a Manhattan nightclub in 1988, according to police officials.

They were expected to be arraigned in federal court Tuesday afternoon.

Investigators would not say if they were believed to be connected to other bank heists.

Information about their defense lawyers was not immediately available.