BROOKLYN HEIGHTS — When Teresa and Rebecca Lo walked into the R train station in Brooklyn Heights, their sunny Sunday afternoon was suddenly pierced by cries for help.

The sisters stood in front of the elevator that takes passengers down to the platform at the Court Street subway station, located at Clinton and Montague streets.

"We could hear screaming and pounding," said Teresa Lo, 30, who was visiting from Los Angeles for the weekend. "We heard this guy yell out, 'help me.'"

Two people were trapped in the malfunctioning elevator, the sisters said.

The station's elevators often have problems, locals said, but are still preferable to the hard-to-find "horror-show creepy" stairwell. 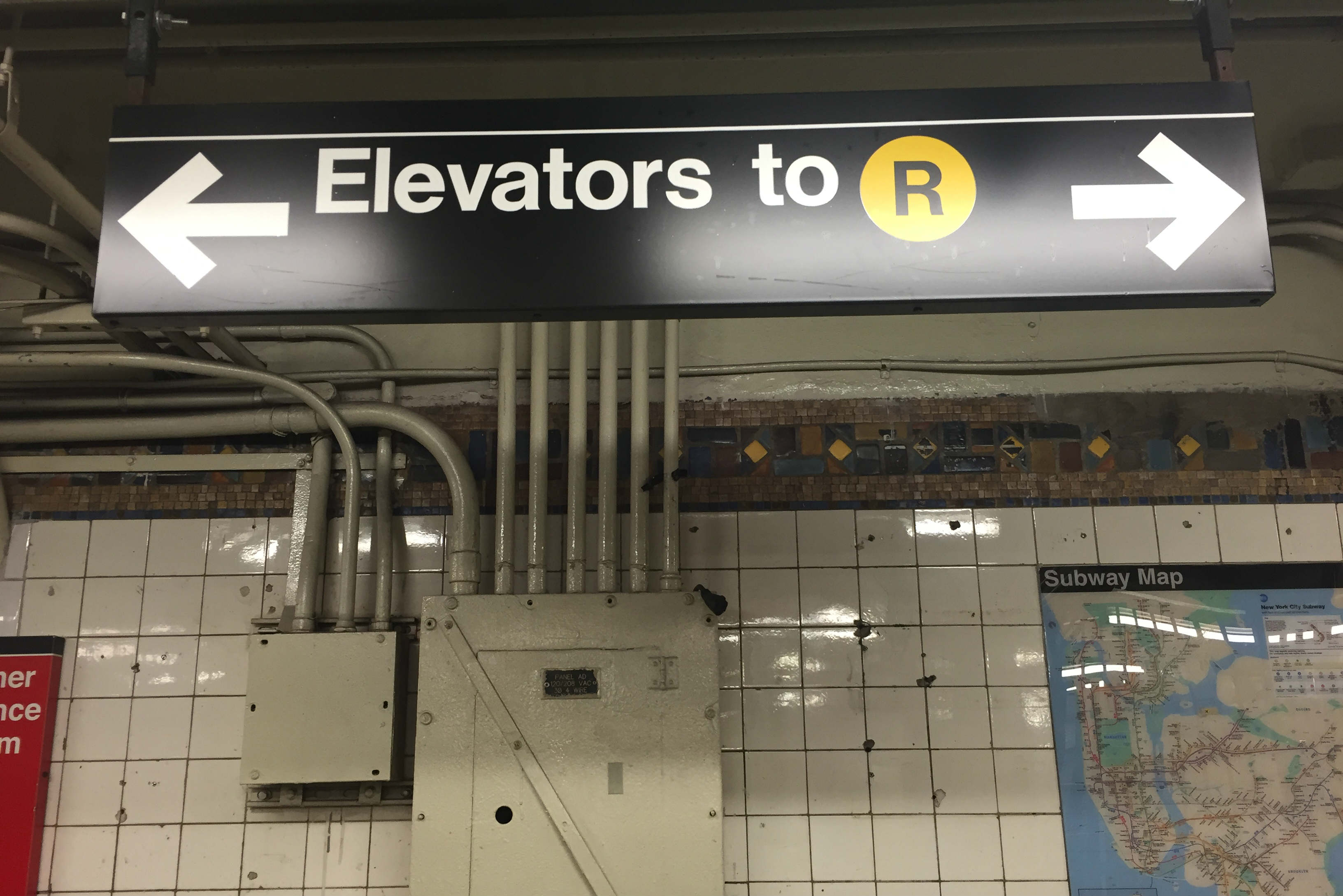 A sign pointing to the R train elevators at Clinton and Montague streets. (DNAinfo/Nikhita Venugopal)

Commuters primarily use the elevators, said Rebecca Lo, 28, who lives in Brooklyn Heights. There is no sign pointing out the stairs, which are located beyond the elevators and behind a door.

After passing through the station's turnstiles, a sign overhead reads "Elevators to R" and points left and right to two different elevators. Each elevator has two doors that open on opposite sides.

The door to the staircase is sometimes propped open, but there are days when it is shut, Rebecca Lo said.

On a recent Tuesday, two days after the incident, straphangers described the rarely-used stairwell as "horror-show creepy" and "dark."

"It's like a very tight, small space, it's not very well lit, it's long," said Jennifer Calabrese, who works in the area. "It's just very easy for something to happen."

But despite the frequency of use, the elevators are regularly out of service. "The elevators are notoriously known to not work very well in the station," Rebecca Lo said.

When the people were trapped Sunday, the sisters first pressed an MTA Customer Service Intercom button near the elevator, but it wasn't working.

They tried two more buttons in other parts of the station but none connected to anyone who could assist them.

"I don't hear anything, I can't speak to anyone," Rebecca Lo recalled. 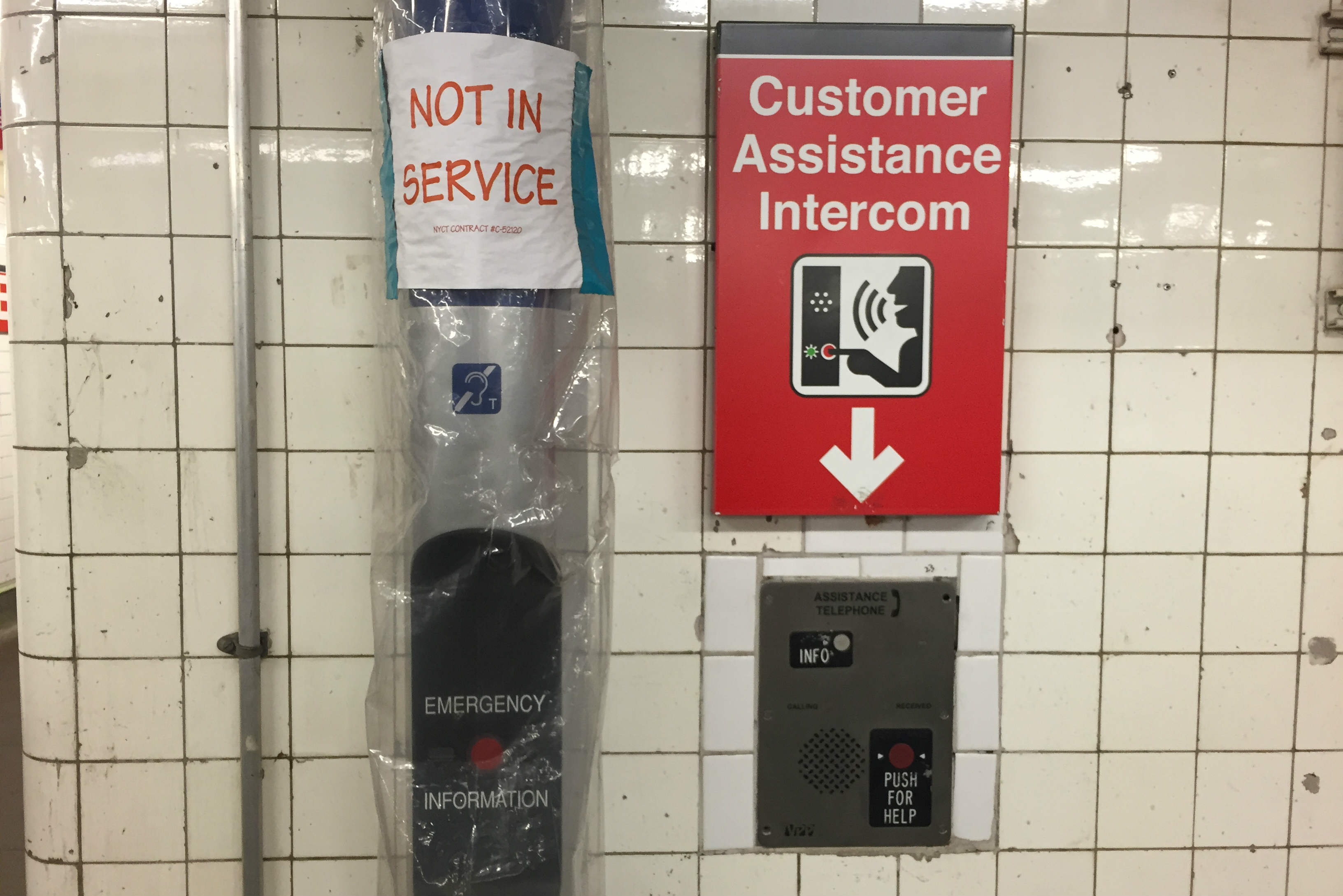 The emergency panel was still out of service on Tuesday morning. (DNAinfo/Nikhita Venugopal)

A panel with an "emergency" button was covered with plastic, with a "Not in Service" sign posted above. (It remained out of order two days later). They tried calling 911 but inside the station, neither could get through to a dispatcher.

The sisters then saw a woman entering the station and asked her to call 911. They waited until the FDNY arrived, talking to a man stuck in the elevator and reassuring him that help was on the way.

Both sisters said the ordeal lasted roughly 10 minutes, from start till the FDNY arrived. It was not immediately clear how long the two people had been trapped in the elevator.

MTA spokeswoman Amanda Kwan said a crew was currently working to repair the intercom in the elevator. It is estimated it will return to service by midnight of June 29. Workers were sent to inspect the intercoms elsewhere in the station and make repairs, which have been completed, she said. 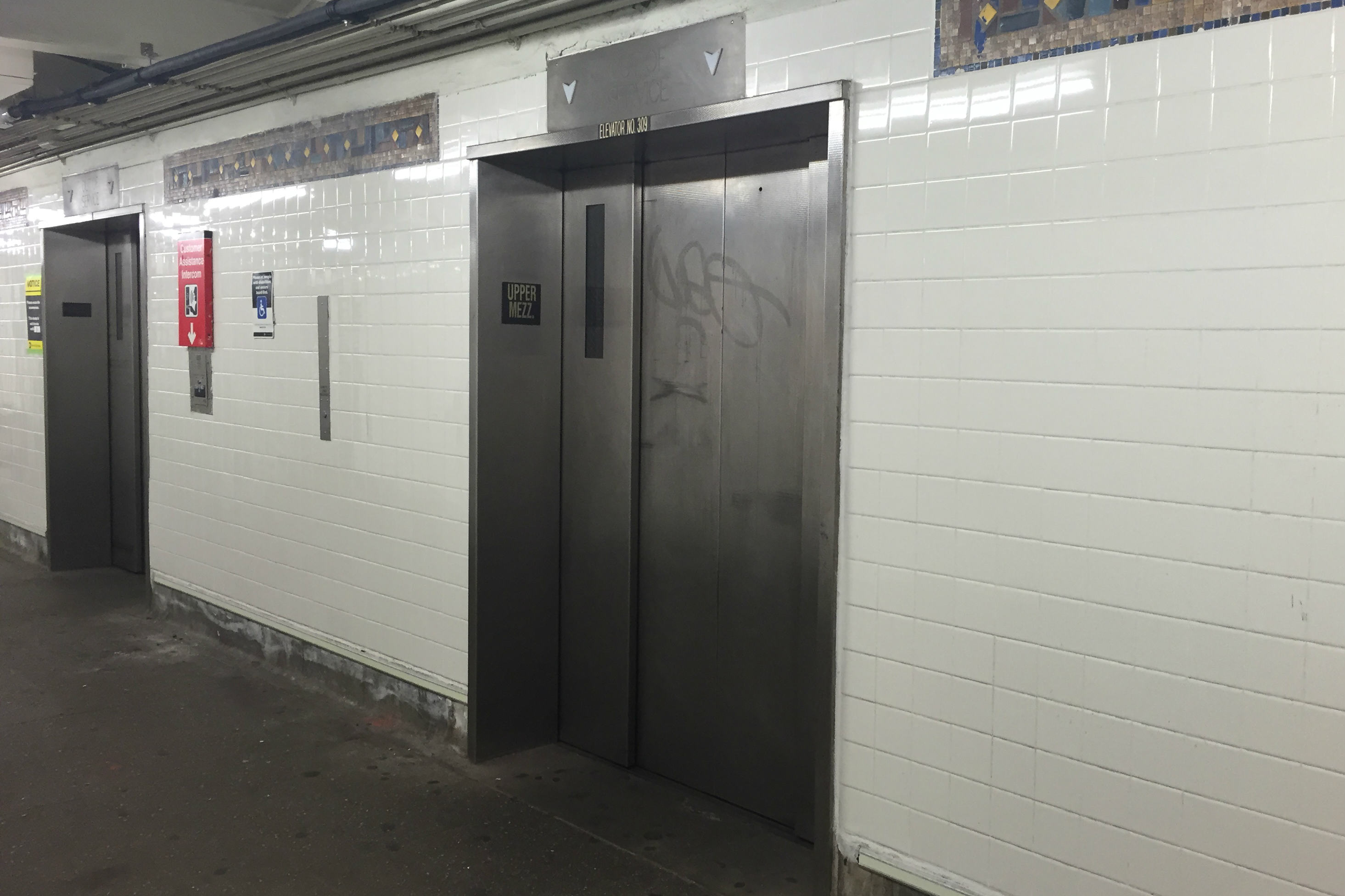 The elevators at the R train station at Clinton and Montague streets in Brooklyn Heights. (DNAinfo/Nikhita Venugopal)