According to the EPA, significant lead contamination in the soil was likely caused by a former smelting and refining facility that was located on the site of ball field 7 in Red Hook in the mid-1920s to the late 1930s.

The Parks Department closed ball fields 5, 6, 7 and 8 — located across the street from NYCHA's Red Hook East Houses — after a decades-old lead contamination was found in the soil in 2012.

The cleanup of those ball fields and Soccer Field 7, located within the four baseball fields next to the recreation center, is slated to begin next fall and continue until late 2018, officials announced in November.

After the discovery of contamination in 2012, officials continued to test other soccer and baseball fields in the Red Hook recreation area, bound by Columbia, Hicks, Lorraine, Clinton and Court streets. Soccer Field 2, near Bay and Clinton streets, and Soccer Field 3, within the track, were also closed after contaminants was discovered, according to a May 3 presentation from the Parks Department.

"We have been working closely with the NYC Department of Health and Mental Hygiene and the Environmental Protection Agency to test the fields and address historic contamination," a spokeswoman for the Parks Department said in a statement last week after Community Board 6 approved a reconstruction plan for ball fields 5, 6, 7 and 8.

"As a result, all of the fields will be reconstructed on a staggered timeline to have the least impact on the local community and field users."

The agency said another public meeting will be held in July with representatives from the EPA, Department of Health and Parks Department.

Once contamination was found in 2012, the Parks Department temporarily closed the fields and began implementing protective measures, such as hydroseeding, regular inspection, placing clay over the soil, concrete over the most contaminated areas, and replenishing vegetative cover.

The Department of Health and EPA both determined that risk to public health was low until 2015, when further resting by the EPA "revealed more significant concerns," according to the Parks Department.

Those findings led to the long-term reconstruction plan for all fields in the park. The total cost of the project is $105.76 million, officials said. 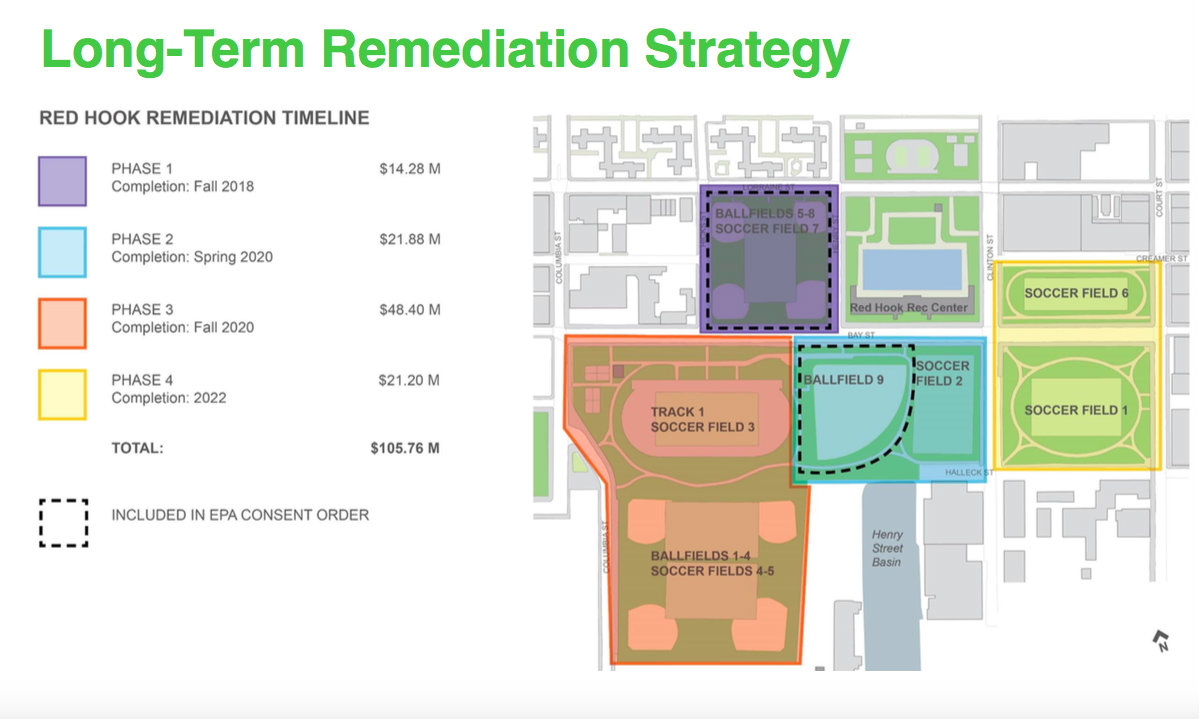 A map of the affected fields and timeline. [Credit: Department of Parks and Recreation]

Current status: All these fields are currently closed

Current status: Soccer Field 2 is closed; Ball Field 9 is open but will close once construction begins in fall 2018

Affected areas: Soccer Field 3 (inside of track), Ball Fields 1 to 4/Soccer Fields 4 and 5

Current status: Soccer Field 3 is currently closed; track around soccer field 3 is open; Ball fields 1 to 4 are temporarily closed for hydroseeding but will be revaluated in July 2016.

Construction timeline: Track 1 and ball fields 1 to 4 will close for construction in spring 2019; construction will continue till fall 2020

Current status: Both fields are open

Construction timeline: Fields will close in fall 2020; the expected completion date for construction is spring 2022

Along with the cleanup, ball fields 5 to 8 will be restored with synthetic turf and new drainage layers to form a barrier between the contaminated soil and the play surface. Community Board 6 last week approved a timeline for this phase of the project.