Soledad O'Brien may cover news around the globe, but she's a Chelsea local at heart.

The broadcast journalist who built her career working as an anchor, producer and correspondent for such outlets as CNN, HBO and MSNBC not only lives in the neighborhood with her family, she operates the media production and distribution company she launched in 2013, Starfish Media Group, and the educational nonprofit she runs with her husband out of an office on 26th Street.

This Thursday, O'Brien will stray from the neighborhood for a good cause. Her Starfish Foundation, which offers young women from low-income families of color around the country the financial support and mentorship they need to get through college, is hosting its 6th annual gala in TriBeCa.

On the eve of the event that thanks the foundation's donors and celebrates its scholars, DNAinfo spoke to O'Brien, 49, about her non-profit work, what it's like to hang out with "Hamilton" star Lin-Manuel Miranda, and how Chelsea has changed since she first arrived in the mid 1990s.

What do you keep in mind when you plan a gala like the Starfish Foundation's?

I go to a million galas. I am a professional gala-goer in New York City. For me, that means our gala has to have a very short program, be really entertaining — you get to see the work that we do — and then the guy who’s chairman of our board is the founder of the New Orleans Jazz Orchestra, so very quickly it’s all dancing all night.

If you can sing and you’re in the audience, you’ll be forced to get up and perform. 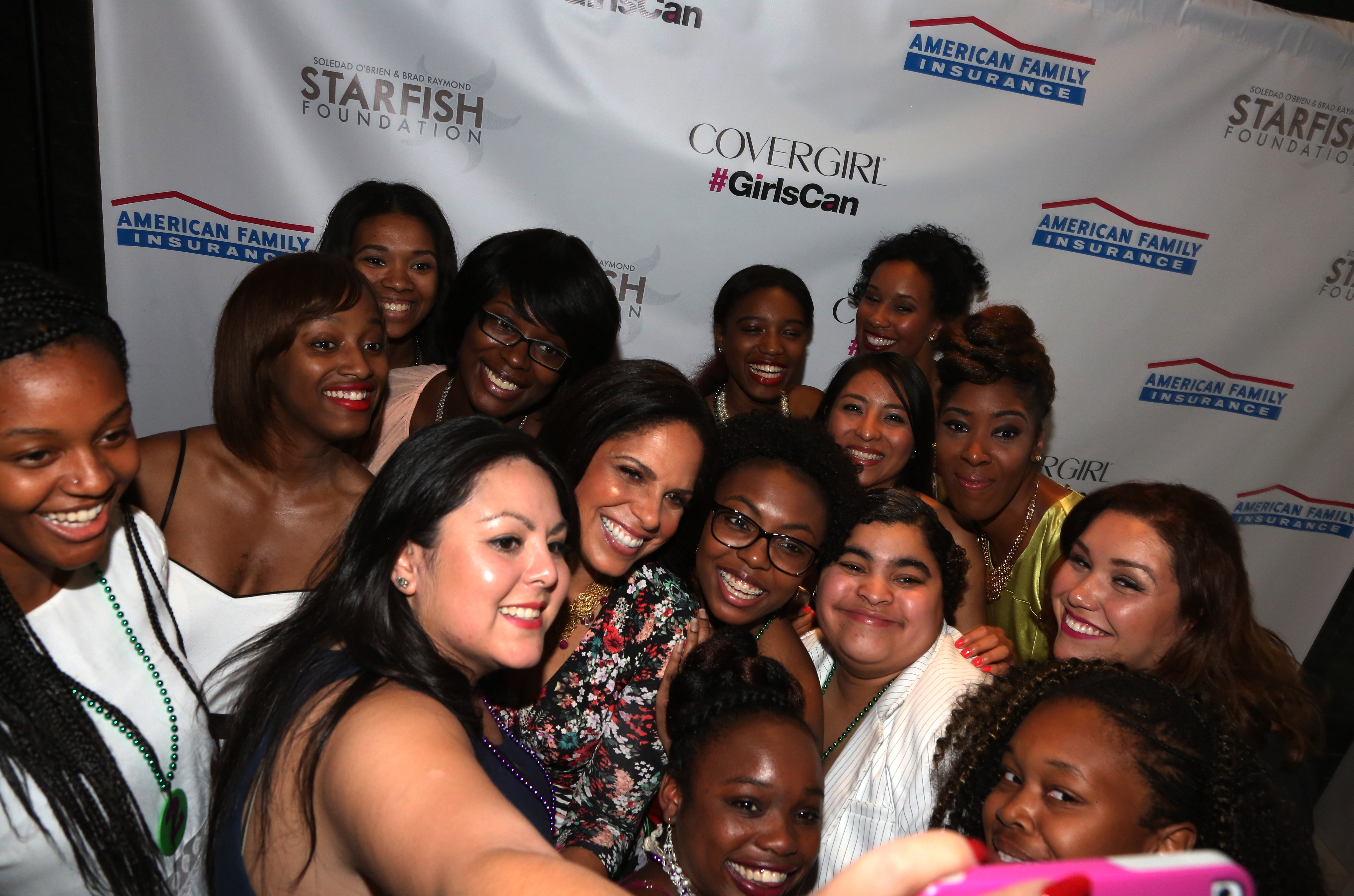 Soledad O'Brien poses for a picture with Starfish Foundation scholars at the non-profit's fourth gala in 2014. (Credit: Getty/Johnny Nunez)

You auctioned off "Hamilton" tickets and interviewed its star and creator Lin-Manuel Miranda at a gala for the John Jay College foundation last month. Are you two BFFs now?

I’ve known him for a long time. We’re besties in my head — he doesn’t know that. I had seen “Hamilton” with my 14-year-old daughter, who loved it, and I had a million questions of my own to ask, so it was an amazing event.

Chelsea ranks among the neighborhoods with the greatest income inequality these days, according to a study by the Furman Center for Real Estate and Urban Policy at New York University. What it was it like when you first moved there?

Part of the appeal that Chelsea had when we first moved there — where it was not particularly expensive, and certainly our street was not great — was you could get a decent amount space, and we had a lot of kids. Our apartment used to be an old warehouse that they renovated.

[In Chelsea,] I think people have a decent amount of space and that’s such a luxury in New York City that it’s become very expensive. At the time, we moved in, it really wasn’t: if anything, it was, "The elevator breaks a lot,"  "No one’s going to want to deliver anything to you," and "Make sure you lock everything all the time.”

When you stopped anchoring a morning news show in 2013, how did your relationship with your neighborhood change?

I got to see a lot more. When I started my own company about two and a half years ago, I became very neighborhood-y, meaning I did yoga a block away and the restaurant where we had meetings for our company used to be next door… Everything I did was within this three-block radius, because Chelsea kind of had everything. Yoga, lunches, kickboxing — those were things that I didn’t do when I anchored a morning show because I was exhausted all the time.

Where do you like to hang out in Chelsea?

There is great karaoke in a little place called Sid Gold’s Request Room.  It’s a beautiful bar, a lot of space. I’m sure it’s an old warehouse. We took our entire [Starfish Media] staff out the other day for drinks and karaoke at Sid Gold’s.

I’ve got four kids, so most of my day is spent just getting stuff done. But I try to get in every day a really good walk, a power walk or run from my apartment down to 22nd Street and then all the way down the West Side Highway as far as I can go and back. That’s a great way in the morning, especially in the summer, to see the city as the sun is rising. It’s just beautiful.

What's your go-to restaurant in the neighborhood?

There was a great restaurant called Tre Dice that went out of business last year because someone was doing work on another building and it undermined the structural stability of their building, so they moved upstate a little bit. The new place I go is called La Pecorina Bianca. It’s on 27th between 6th and 7th. And it’s great — great menu, outdoor space.

Where do you like to do your food shopping?

Chelsea has a million places. Near where I live, there’s a Fairway, there is a Trader Joe’s, there’s a Whole Foods, there’s a Garden of Eden and there is a Gristedes. You can go anywhere, which is crazy — because when we first moved in there was nothing. Gristedes is great for the big grocery shopping, Whole Food is great for the random kombucha and very, very fresh vegan. We used to go all the time to the Garden of Eden for fresh fruits. We run to Fairway for lunch, because they do great salads. Trader Joe’s of course has the greatest pre-packaged stuff.

Performer Murray Hill Talks Burlesque, Brooklyn and Too Much Glitter

Actress Lois Robbins on Filming Soaps in the City

Les Nubians Talk About Bars and Cafes in Bed-Stuy

The Subway is One of Paul Giamatti's 'Favorite Things'

Straight from Shaolin, Wu-Tang Clan's U-God Talks About His Hometown