By Nikhita Venugopal |&nbspMay 20, 2016 7:39am
@nkvenugopal
Twitter Facebook Email More
A local marks his "ideal" route for the BQX on a map of Red Hook and surrounding neighborhoods at the neighborhood's visioning meeting Thursday evening.
View Full Caption
DNAinfo/Nikhita Venugopal

RED HOOK — A little more than a week after the city kicked off its first neighborhood meeting around the proposed Brooklyn-Queens streetcar system, city officials gave Red Hook residents a chance to weigh in at a public session Thursday evening.

The BQX, as the 16-mile streetcar system is known, would connect neighborhoods between Astoria and Sunset Park along the waterfront, such as Long Island City, Williamsburg, DUMBO, Red Hook and Downtown Brooklyn.

► Here's What We Know About the Brooklyn-Queens Streetcar Plan

Community members, locals and officials were broken into groups of nine and asked, "can you imagine BQX in your neighborhood?"

Each table was then told to map out their ideal street route for the neighborhood. (The exact route for the $2.5 billion system as yet to be announced.)

John Quadrozzi Jr., developer and president of Red Hook's Gowanus Bay Terminal, picked up a green marker at his table of 10 people and drew the first point near the Smith-9th Street F/G subway station, the nearest one to Red Hook.

"The connectivity to public transportation is one of the things that Red Hook is lacking," he said following the session at the Red Hook Recreation Center.

"Now we [would] have a dedicated reliable means to connect to Smith and 9th Street." 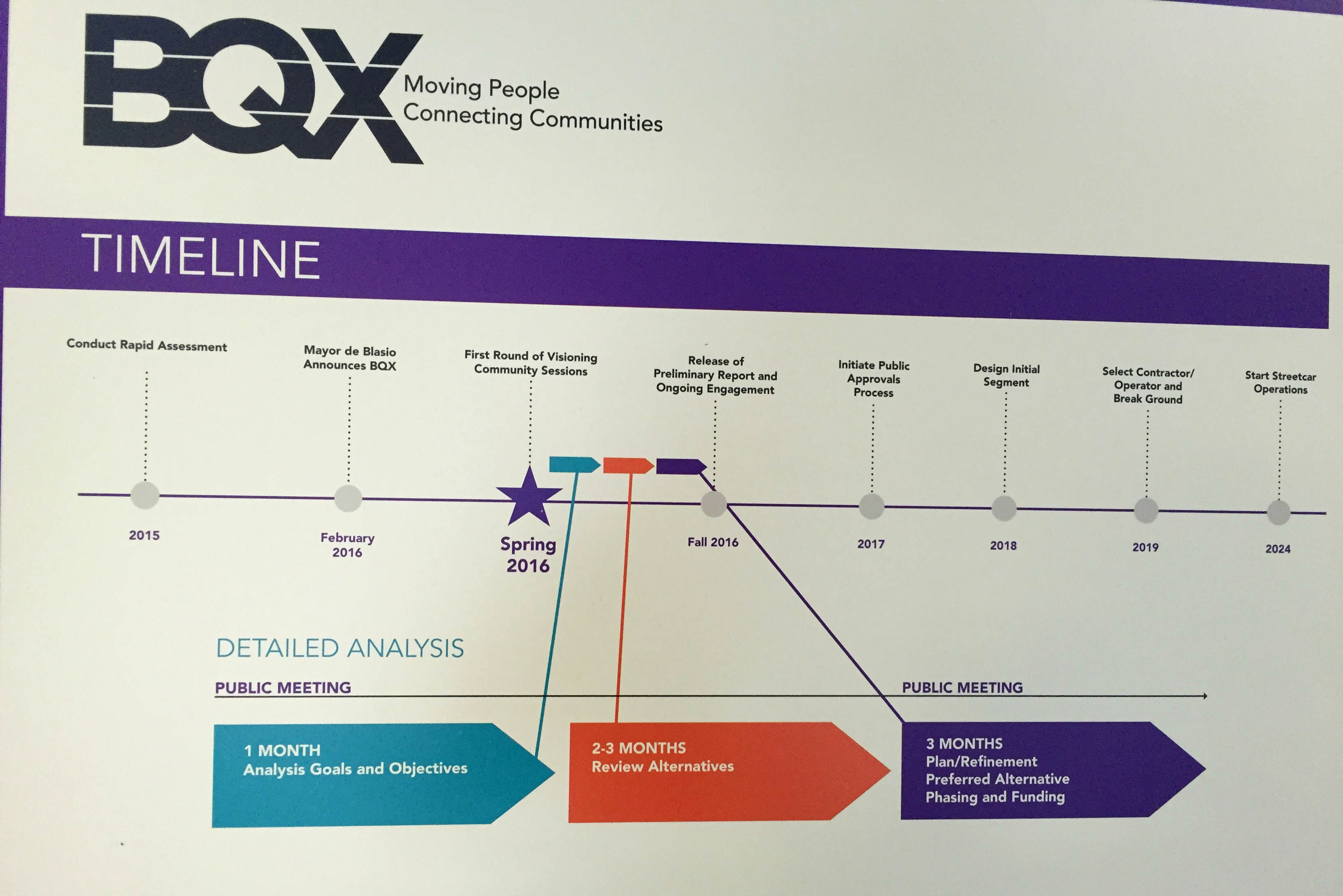 The need for easy access to existing public transit was crucial to many community members at the meeting. Other suggestions included a connection to LaGuardia Airport, mitigating traffic congestion, bike holders on each streetcar and the importance of safety while planning and building the system.

Bob Diamond, a transit enthusiast who has championed a trolley system in Red Hook for years, envisioned the system having a main "spinal column" that would have "other localized systems springing off" into the inner-borough neighborhoods. 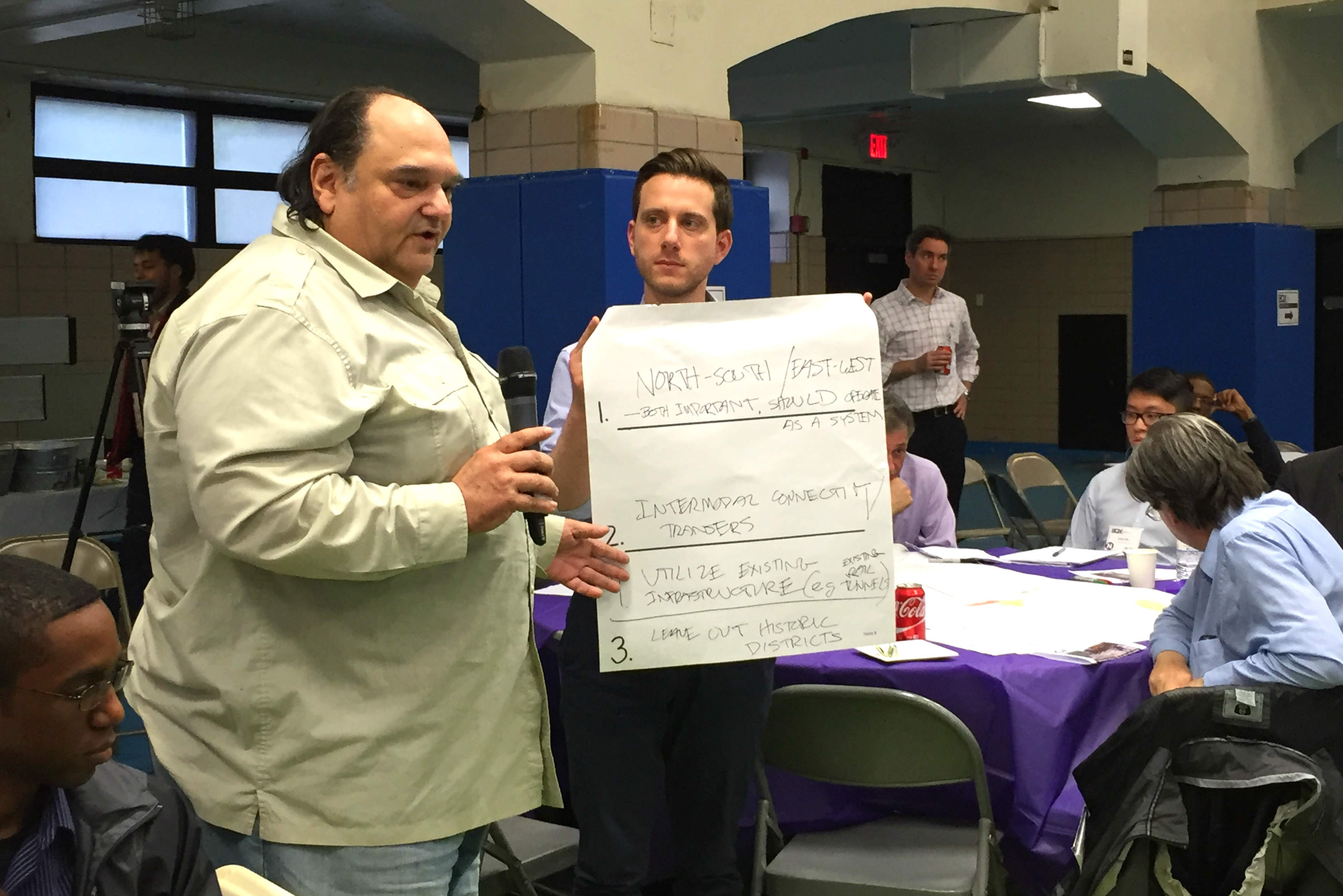 Some locals however questioned the need for a streetcar system, rather than enhancing the existing bus lines that overlap the proposed route.

Streetcars have the ability to move twice, and in some cases three times, as many people per car when to compared to buses, according to Lydon Sleeper, a senior official with the city's Economic Development Corporation who spoke at the meeting.

"They're smooth, efficient, emission-free, clean way to move people up and down," he said.

"We feel very confident that this is the best mode," he added.

But some recalled a study by the Department of Transportation from 2011 that derailed an earlier plan for a dedicated light rail system in Red Hook.

At the time, the DOT determined that a 6.8-mile loop connecting Red Hook to Downtown Brooklyn was not cost effective and did not show improvements in travel time or reliability when compared to existing bus services.

In imagining the system through Red Hook, Mcilvaine thought about how the streetcars would navigate the neighborhood's narrow roads and turns, some of which are already laden with heavy truck traffic.

Yet, like many attendees of the meeting, she remained cautiously optimistic.

"I came with an open mind," she added.

Lindsay Park Board Being Investigated for 'Mistreated Money,' Sources Say