BROOKLYN — Whether it's a new glass tower going up or a beloved mom-and-pop shop closing down, locals often blame gentrification for unwanted changes in their neighborhoods.

But what actually defines gentrification?

NYU’s Furman Center, in a report released Monday, identified 15 neighborhoods that can be classified as “gentrifying” — areas that were relatively low-income in 1990, but then experienced higher rent growth in the following 20 years compared to other neighborhoods.

"The term ‘gentrification’ is often used to describe a number of different aspects of neighborhood change. We wanted to create a definition that allowed us focus on dramatic rent growth, which is the change that is of greatest concern in lower-income neighborhoods,” Ingrid Gould Ellen, faculty director of the NYU Furman Center, said in a statement.

The report also found that gentrifying areas — including Williamsburg, East Harlem, Mott Haven and Astoria — have seen a greater growth than other areas in their share of residents who are young adults, college-educated, white and living alone or with roommates. 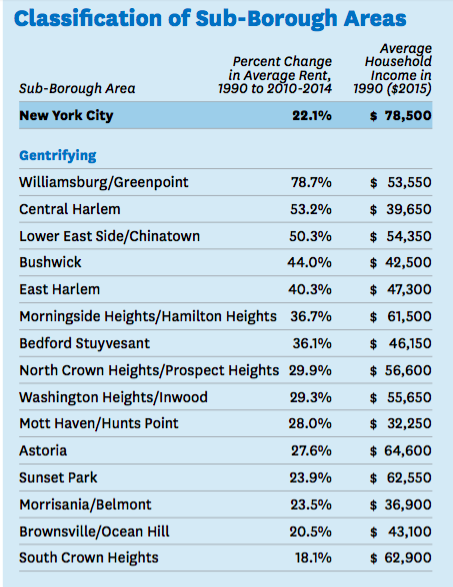 These 15 areas saw an increase in white population, despite a citywide decrease, the report found. The areas also saw a larger decrease in the black population than the city as a whole.

Besides rents, incomes in the gentrifying areas rose at a greater clip than incomes elsewhere in the city.

Between 1990 and 2014, average household income in gentrifying neighborhoods rose by around 14 percent, the report found. That compared to an 8 percent decline in “non-gentrifying” neighborhoods where rent growth was more modest (like Kingsbridge, East New York and Coney Island) and steady income in "higher income" areas (like Greenwich Village, Carroll Gardens and Forest Hills).

Many housing advocates complain how landlords in these areas are increasingly finding way to get lower-paying tenants out and charging newer tenants far higher rates than are legally allowed under rent regulation limits.

“Landlords know their apartments are in demand,” said Althea Watson, who is active in her block association as well as the Crown Heights Tenant Union and IMPACCT Brooklyn. “A landlord will split up apartments and pack [college kids] in like sardines. They can do it and get away with it because the kids are only there for a short time."

Watson has witnessed the wave of gentrification wash over her block near the Prospect Heights/Crown Heights border, bringing restaurants serving sushi, supermarkets carrying organic produce and lots of cafés with fancy coffee.

But with more services come “sky high" rents and pressure from landlords to get low-paying rent-stabilized tenants out, said Watson, who moved to the area as a kid 35 years ago. And alongside the exodus of renters, families who’ve lived in the neighborhood’s brownstones for decades are cashing out and leaving, too, she noted.

“A lot of people have left. They’re going to the Carolinas. They’re migrating down South like little birds,” said Watson, 45, who lives on Union Street between Bedford and Franklin Avenues in an affordable unit protected through Section 8 subsidies.

The newcomers, she said, are mostly young, white and single, often posting roommate notices at the new cafes in the area.

While Watson said she didn’t mind young people moving into the area, she did mind how few joined block associations. Most “come and go” and don’t get involved in trying to better the community’s schools or fight for other improvements, she noted.

“For most of them, it’s like as soon as they get married, they find some place up in Westchester or [Long] Island,” she said.

But with their help, she believes, her neighborhood could achieve more.

“I hate to say it, but you need white people to get things done. I’ve noticed our block association is more powerful now than it was 10 years ago,” Watson said, noting that they’ve been able to do things like getting street lights more quickly as the demographics on her block have started to shift.

Max Mecklenburg, a 30-year-old public health graduate student at SUNY Downstate — who grew up in the gentrifying Morningside Heights — realized he would be viewed as a gentrifier when he moved to Crown Heights a few years ago.

“There are larger structural issues that I wish I didn’t contribute to in the ways I do,” he said, “I don’t think there’s any point in feeling guilty about, but in doing something about it.”

To that end, he banded with long-term tenants in their fight against their landlord at 940 Prospect Pl.

When his landlord, for instance, told Mecklenburg that he would give him a space heater but not give them to other tenants — like the single mom across the hall he admitted to wanting to force out — Mecklenburg used that in a legal case tenants filed against the landlord.

"The landlord didn't initially suspect me [to help the tenants' fight against him] because I'm white," he said. "He ended up sending incriminating emails that we were able to use against him."

Tenants in the building also urged a group of young women from Ohio to file a rent overcharge for their unit, said Mecklenburg, who has since moved out.

“They discovered they were being overcharged by at least $300 a month. They said, ‘We don’t want to cause any trouble,’ but at the insistence of the tenant association they did file an overcharge and last month were awarded a $39,000 settlement by the city.”

The landlord, he noted, is expected to appeal the settlement.

Live in a $5.9M Apartment for Free by Getting a Job as a Building Manager