By  Nicole Levy and Katie Honan

Remember that movement to divide New York into two autonomous regions, an upstate New Amsterdam region and a downstate New York one?

It didn't end with the "Secession Movement Rally" held in Bainbridge last summer — another assembly for the cause is scheduled for May 14.

Advanced by groups such as the Divide New York State Caucus, the secession plan argues that a split between the New York City area and the rest of the state would best serve constituents' "vast differences in lifestyle and aspirations." It could also make it easier for an upstate government to overturn a ban on the controversial drilling practice of hydraulic fracking, which secessionists consider a squandered economic opportunity.

Long before secession fever gripped upstate New York, there were outbreaks in these four locations within New York City limits:

Residents of the Rockaway peninsula first pushed to branch out on their own in the early 20th century.

And they were almost successful, according to historian Alfred Bellot's 1917 account, "Bellot's History of the Rockaways."

Assemblyman Thomas A. McWhinney introduced a bill in 1915 calling for the peninsula to secede from New York City and to create a completely independent entity, "Rockaway City." Behind that proposed legislation was the widespread feeling among residents that City Hall wasn't spending enough in the area for the tax dollars those constituents contributed. 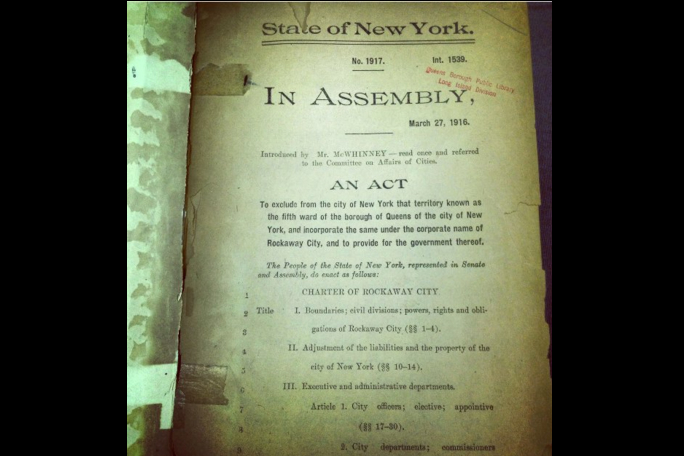 They wanted capital projects such as an up-to-date sewer system, an oceanfront boardwalk from Far Rockaway to Neponsit, a better highway or boulevard through the neighborhood, and a highway across Jamaica Bay connecting the Rockaways and Brooklyn, Bellot wrote.

Rockaway residents traveled to Albany to advocate on behalf of McWhinney's bill, which passed in both the State Assembly and Senate by "very large majorities," according to Bellot.

Back in New York City, then-Mayor John Purroy Mitchel vetoed the bill after another public hearing, draining it of momentum.

Roughly a century later, the musician, activist and wannabe City Council member John Baxter re-discovered the proposed law and decided he wanted to run for mayor of the new Rockaway City when it was established.

He argued that the Big Apple had "stole[n] the whole peninsula," and that "the city owe[d] Rockaway big-time," as he told the New York Times, because residents had never had the chance to vote on whether they wanted to leave the city or not in 1915.

Baxter intended to put together a vote in spring 2002, but it never materialized.

The Staten Island movement to secede from New York City took off in 1989, after the U.S. Supreme Court declared the equal representation of differently-sized boroughs on the Board of Estimate — a government body controlling the city's land use, contracts, and budgeting — unconstitutional and forced the city to create a new government.

Worried the city's revised charter would marginalize their voices, Island leaders and residents united around a push for independence then-State Sen. John Marchi's had launched two years prior.

That December, the State Senate and Governor Mario Cuomo passed a bill giving Islanders permission to vote on whether they wanted to study the feasibility of their own city.

More than 80 percent did, and the resulting state commission drafted a charter for what would be a distinct municipality.

Almost two thirds of voting Islanders cast their ballot in favor of the charter in 1993, "say[ing] yes to independence," as the front page of the Staten Island Advance put it. 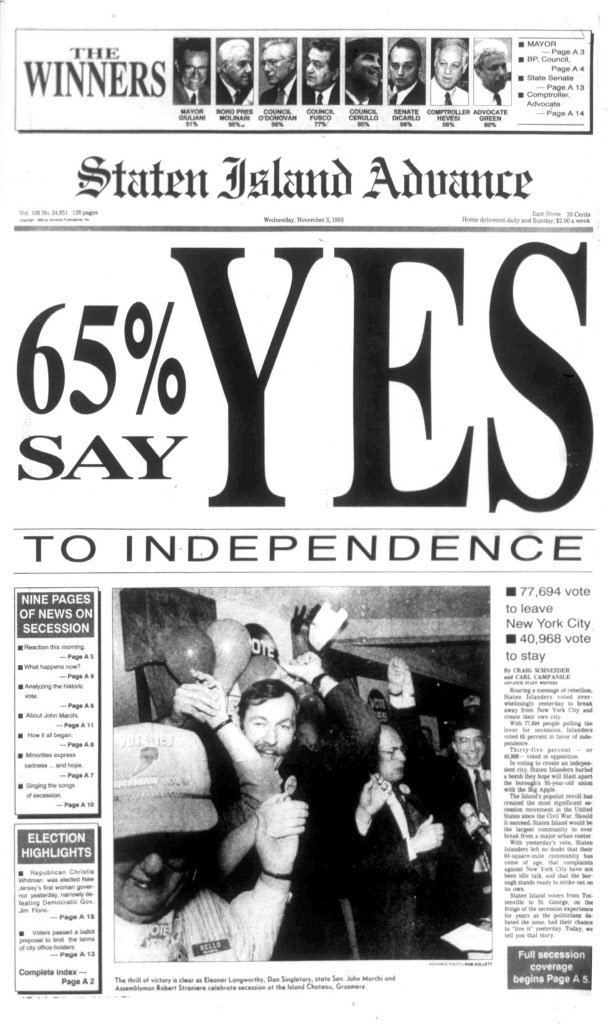 Courtesy of the Staten Island Advance

But the motion to break up the Big Apple stalled in the state Assembly after passing the Senate.

In 2009, state Senator Andrew Lanza picked up the torch for secession, which he argued would be the best way for the Island to secure its fair share of health care, mass transit and education funding. The Republican found little support from his fellow politicians.

Taking a page out of Staten Island's book, three Queens lawmakers introduced a bill in 1992 proposing the borough's secession from the city.

The legislation had "virtually no chance of passage," according to the New York Times, but it tapped into a well of ill-feeling toward City Hall and Manhattan politicians that Queens residents had nursed since at least 1969, the year that Mayor John V. Lindsay left much of northeastern Queens unplowed for days in the aftermath of a blizzard that blockaded streets and virtually trapped residents in their homes.

"They treat us just like we're an outer borough," said then-state Assemblyman Anthony Seminerio, a co-sponsor of legislation that would allow the residents of Queens to begin to process of establishing an independent city.

Years later, the politician was imprisoned for taking bribes in exchange for political favors.

In November 2012, following the wave of disgruntled Americans petitioning to allow their state to secede from the United States and its newly re-elected president, East Williamsburg resident Ian MacAllen filed his own online petition with the White House. 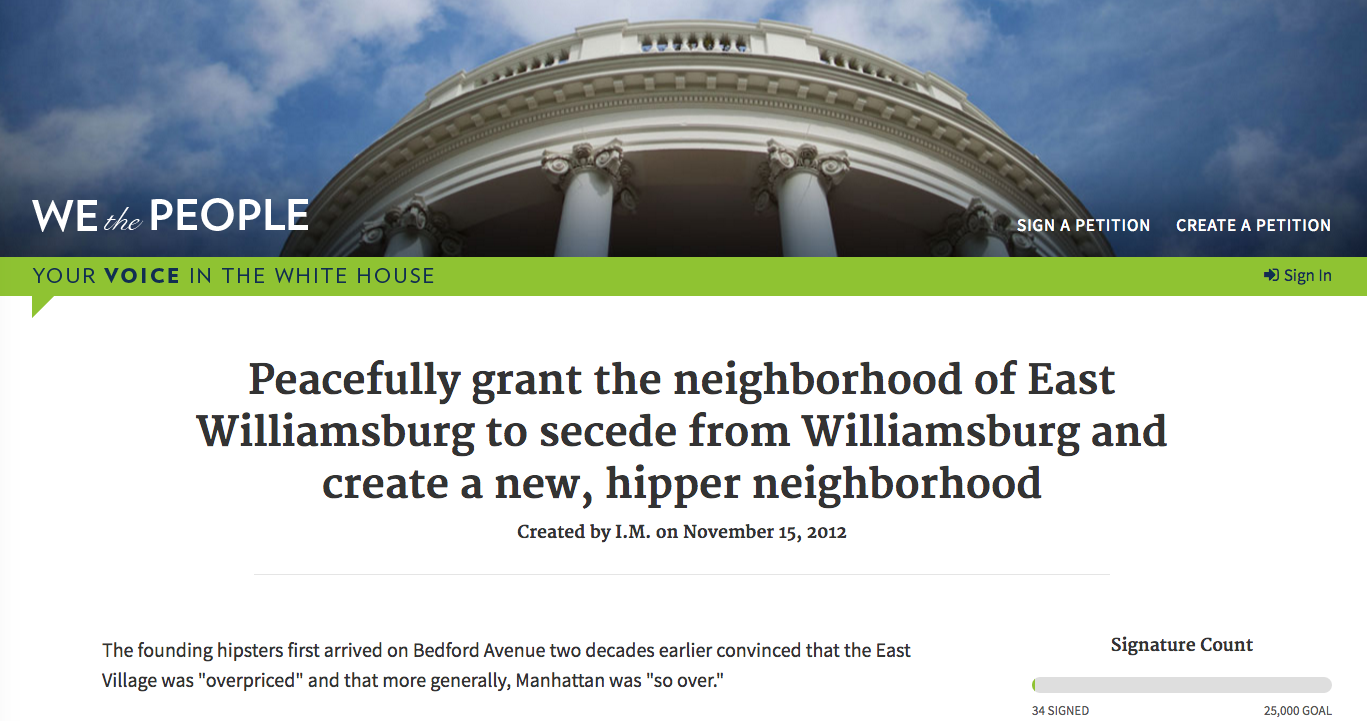 Its objective: to emancipate the graphic designer's "grittier" neighborhood from Williamsburg, "a Disneyland of fashionable shops and expensive cocktail bars" where "baby-bankers living in the glass, waterfront towers ha[d] pushed out the smack junkies and complain[ed] to the police about 'noise' from rock musicians."

MacAllen's satirical experiment attracted the attention of local media, including The Daily News and New York magazine, but the petition only collected 34 signatures.

Added MacAllen, "I think my fondness for the moniker English Kills comes from the fact that I have an advanced degree in English literature; academic English can kill you."