PROSPECT PARK — Two days before the New York presidential primary, Bernie Sanders drew thousands of people to Prospect Park for a public rally in the borough where he was born — which organizers called his biggest rally to date.

To support their favorite candidate, the more than 28,000 attendees of the event — which doubled as a free concert by Grizzly Bear — brought a whole lot of artistry, including DIY and handmade stickers, cutouts, signs and even a one-man flag dance dedicated to Sanders.

While waiting in the Nethermead meadow in for the rally to begin, Steph Burr, a 27-year-old artist who traveled from Connecticut to the event, gave away about 50 handmade signs of the Vermont senator’s face above the words “our voice.”

Steph Burr, 27, a self-described "starving artist" gave away 50 of these posters she created to rally attendees. pic.twitter.com/40zmC7AE3O

“People thought I was trying to sell them,” she said with a laugh. She also gave away dozens of stickers with the same image, which she painted herself.

Chris Ofner of Chelsea got a lot of attention at the rally with his large rainbow flags — handmade two days ago specifically for the rally — that he twirled near the stage where actors Danny DeVito and Justin Long introduced Sanders. 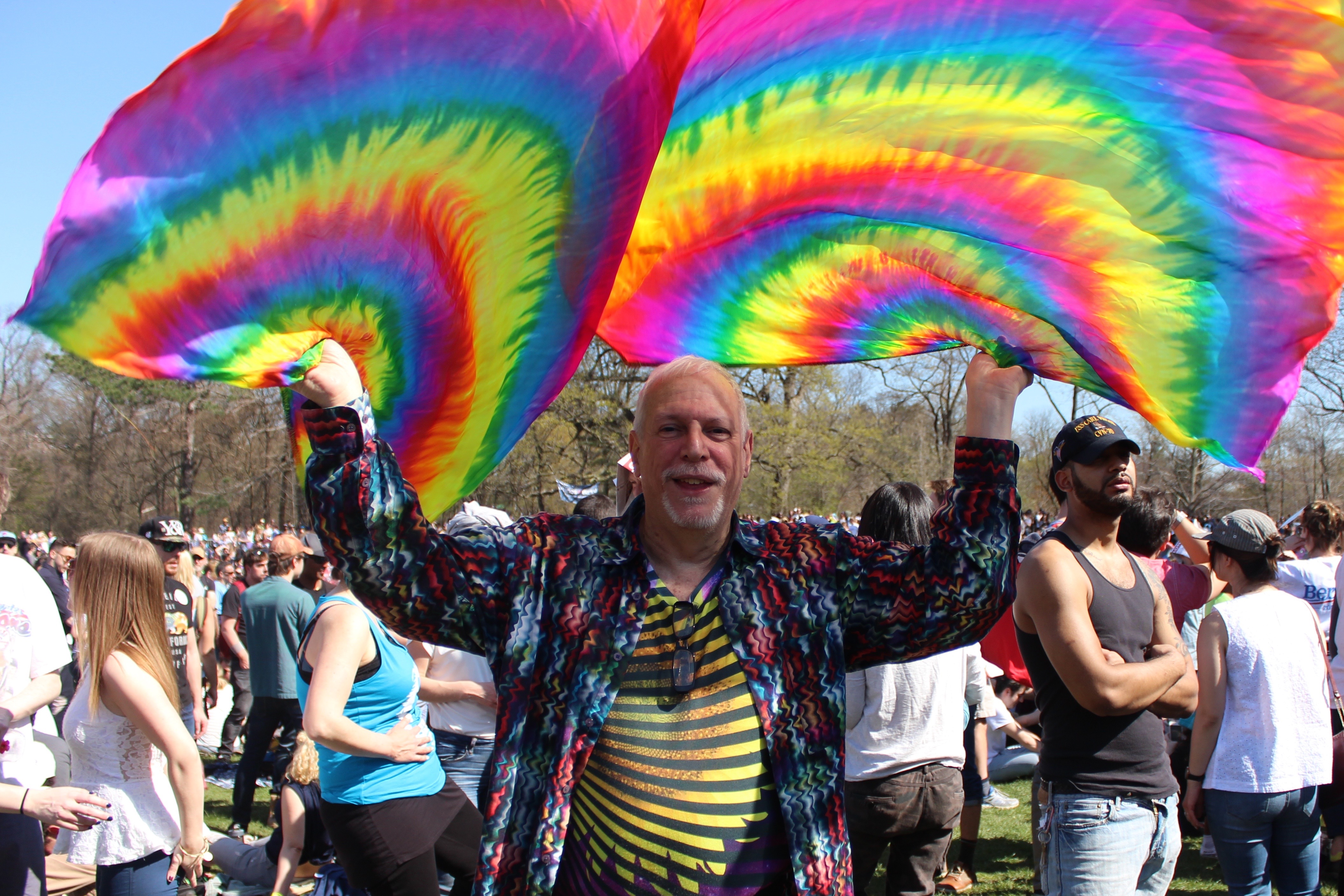 “I voted for Bernie already,” Ofner said — explaining that he used a special ballot for early voting — because he works for the Board of Elections and will have his hands full on primary day, he added.

Pancho Gonzalez, 43, cheered on Sanders from on top of a police barricade at the rally as he watched two new endorsements of the candidate by political commentator Sally Kohn and Brooklyn Councilman Jumaane Williams.

Gonzalez, a Fort Greene resident, brought his own handmade signs to the event depicting “Rosario the Riveter” — a mash-up of actress (and Sanders supporter) Rosario Dawson and Rosie the Riveter. 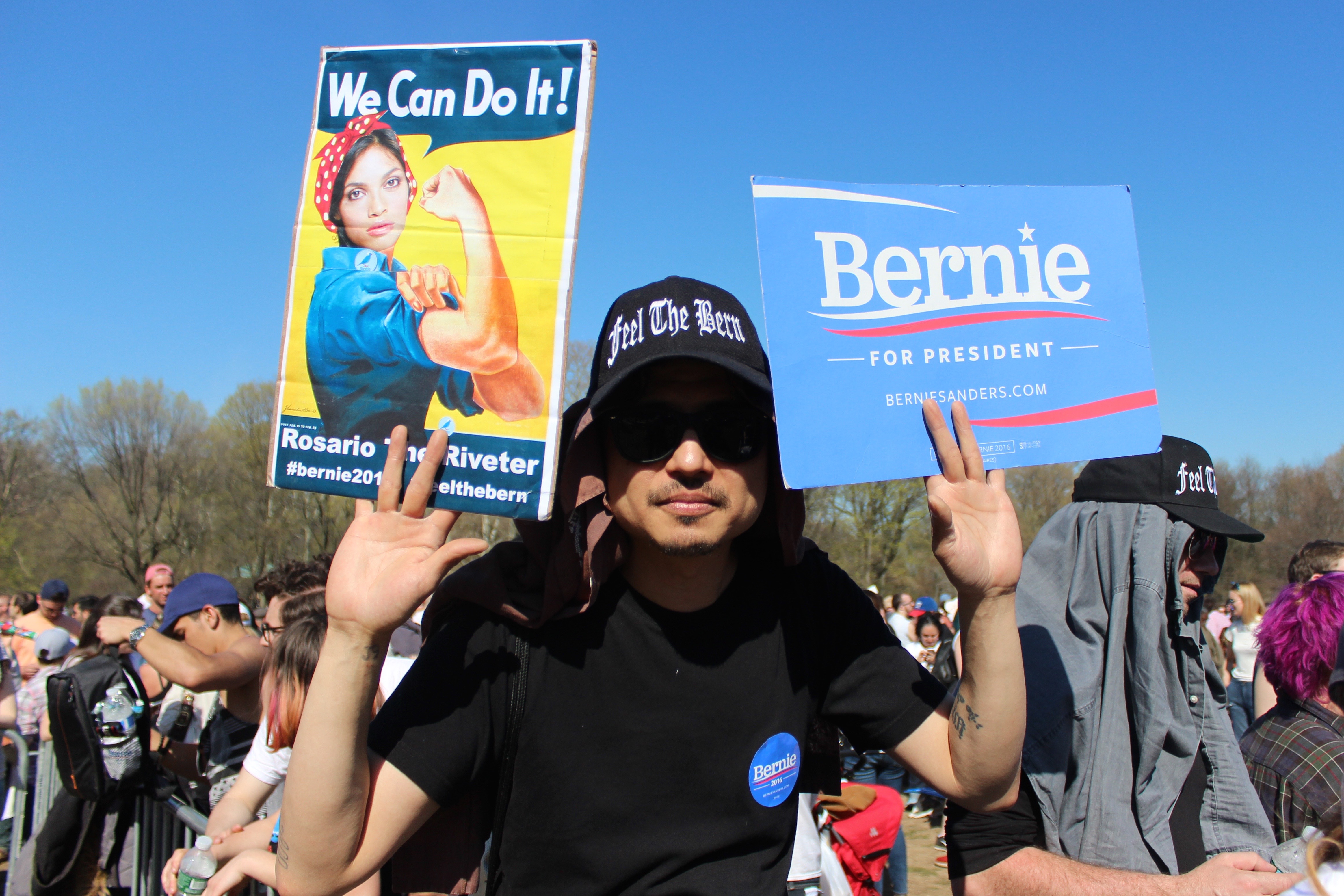 “Bernie people, that’s why they love him. He’s the most pun-able presidential candidate of all time,” he said.

As Sanders took the stage to make his stump speech, artist Dick Averns chose a spot right in front of him, carrying two fake street signs, “Ambivalence Blvd.” and “Liberty Ave.,” above the heads of the cheering crowd. The Calgary native says he traveled from his home country to bring the signs to rallies for all the 2016 candidates; he brought them to a Trump rally in Syracuse, N.Y. on Saturday and got thrown out. 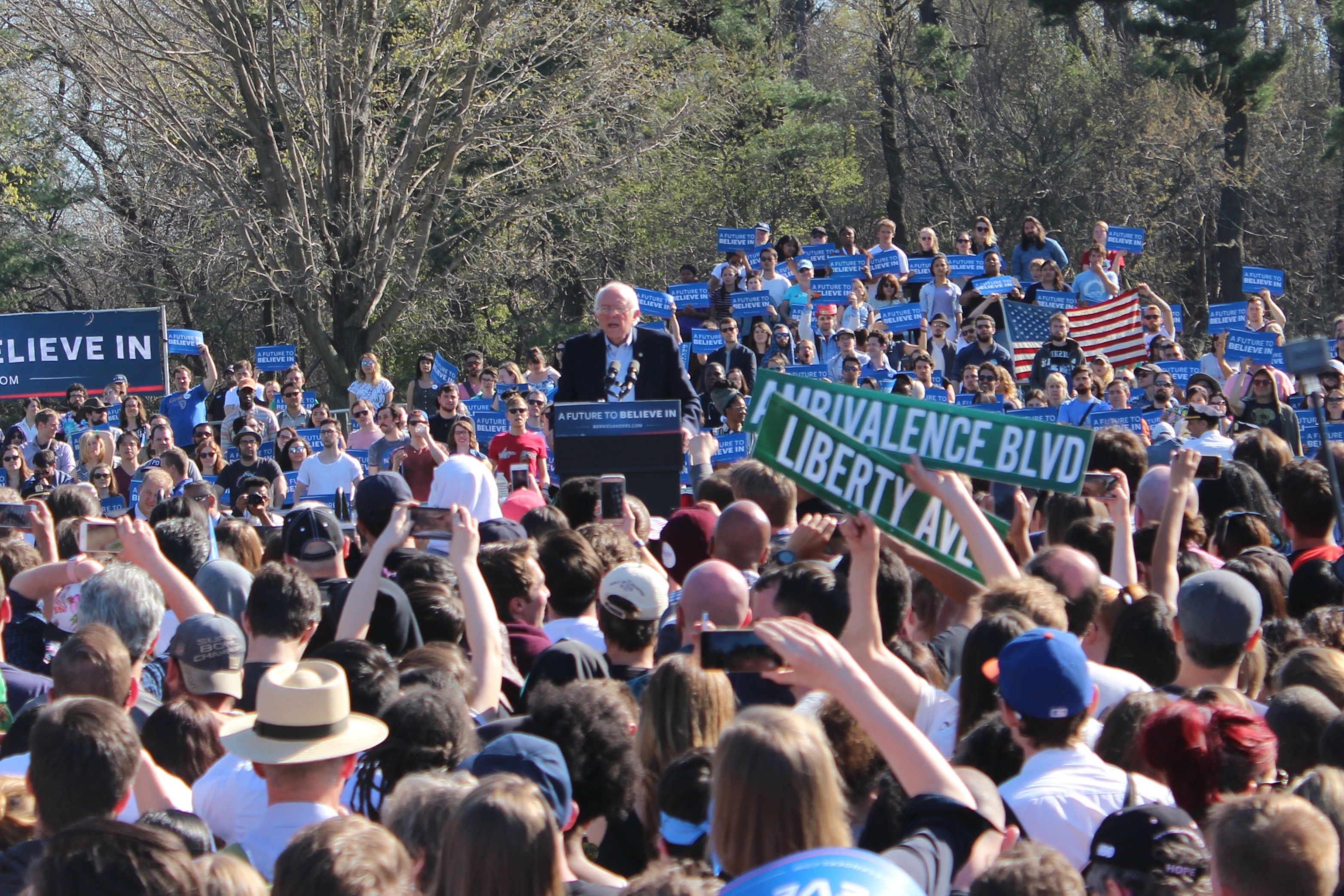 “Obviously, I can’t vote” as a Canadian citizen, he said. “But I try to as a process of engagement, and a debating point … to always see things from both sides.”

Sanders’ remarks — which addressed a familiar range of topics including income inequality, campaign finance reform and climate change — revved up the crowd, which is hoping he beats Hillary Clinton who leads by quite a bit in the New York contest.

Polling analysis by political website FiveThirtyEight puts Sanders’ chances in the primary are approximately two percent, according to their latest forecast.

But those numbers weren’t the focus at Sunday’s event. As part of his speech, Sanders reminded the crowd of his come-from-behind campaign.

“This is a campaign that a year ago was considered a fringe candidacy, 70 points behind Secretary Clinton. Well, they don’t considers us fringe anymore,” he said as the crowd roared.

After Sanders’ hour-long speech, dozens of people took selfies with cutouts of the senator, created by 22-year-old Javier Duarte for all the New York Sanders rallies — in the Bronx, Brooklyn and Manhattan with another planned in Queens on Monday. 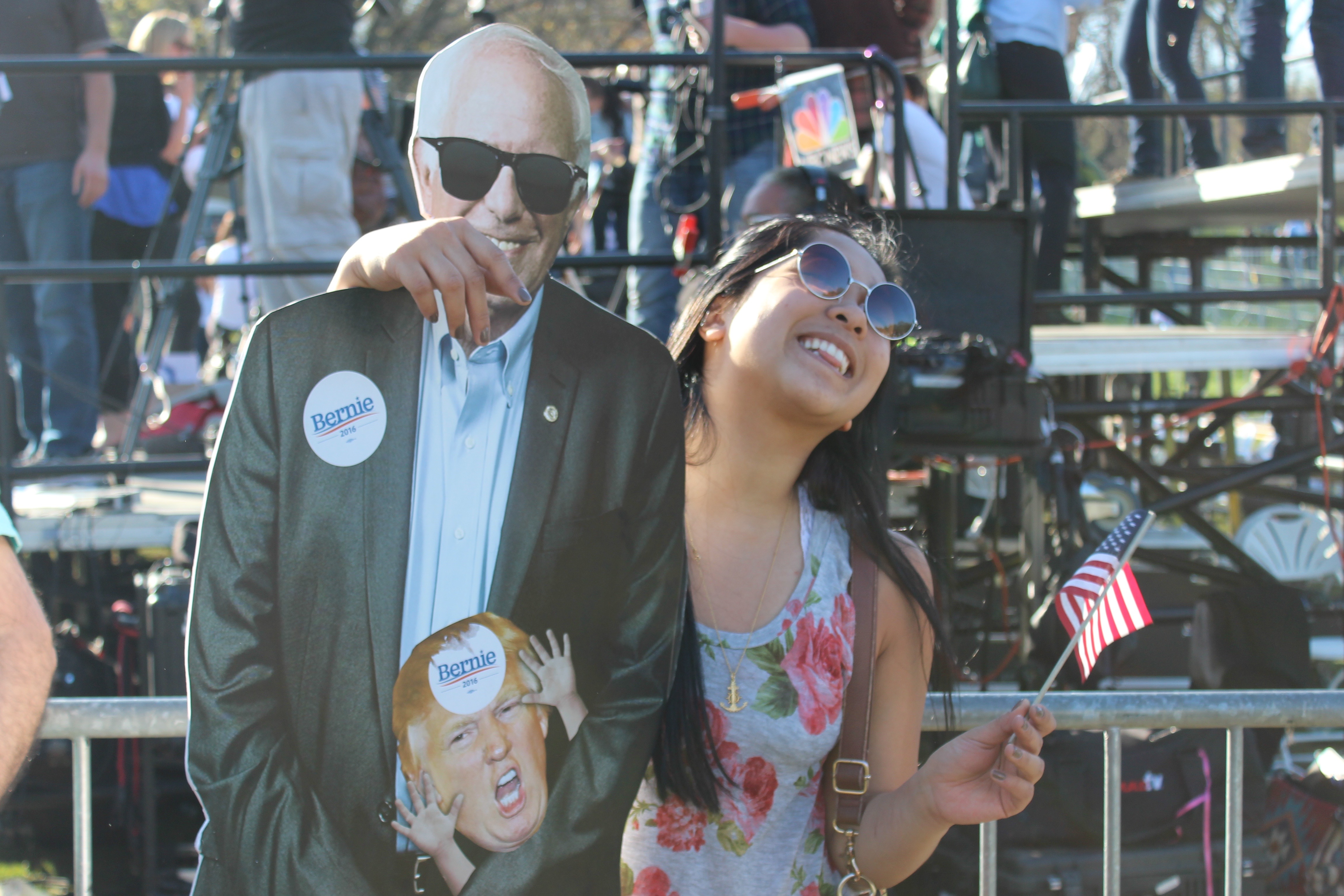 “It took on a life of its own,” Duarte said of the images, which he printed in his Midtown office, pasted on foam board and now takes all over the city with him, sometimes just walking down the street.

Sanders and Clinton have spent a lot of time in Brooklyn in the run-up to Tuesday’s primary, holding rallies, visiting churches and making appearances all over the borough, most recently sparring in a debate at the Brooklyn Navy Yard Thursday.

P.S. 191 Ranks as One of Manhattan's Most Dangerous Schools, State Says