MANHATTAN —  Lin-Manuel Miranda’s hit musical “Hamilton” is not only making history cool on Broadway, it’s also been a boon for real estate in Upper Manhattan, helping lure crowds to Alexander Hamilton’s home on West 141st Street and giving areas such as Hamilton Heights and Washington Heights a new cachet.

Hamilton’s legacy in the area was the hot topic at the kickoff event last weekend for the Real Estate Board of New York’s 2016 Uptown Open House Expo, where Kevin Draper of New York Historical Tours discussed that the Founding Father selected the hilly terrain in Northern Manhattan to build his 32-acre estate for many of the reasons people today are flocking to these neighborhoods: for more space and for views. 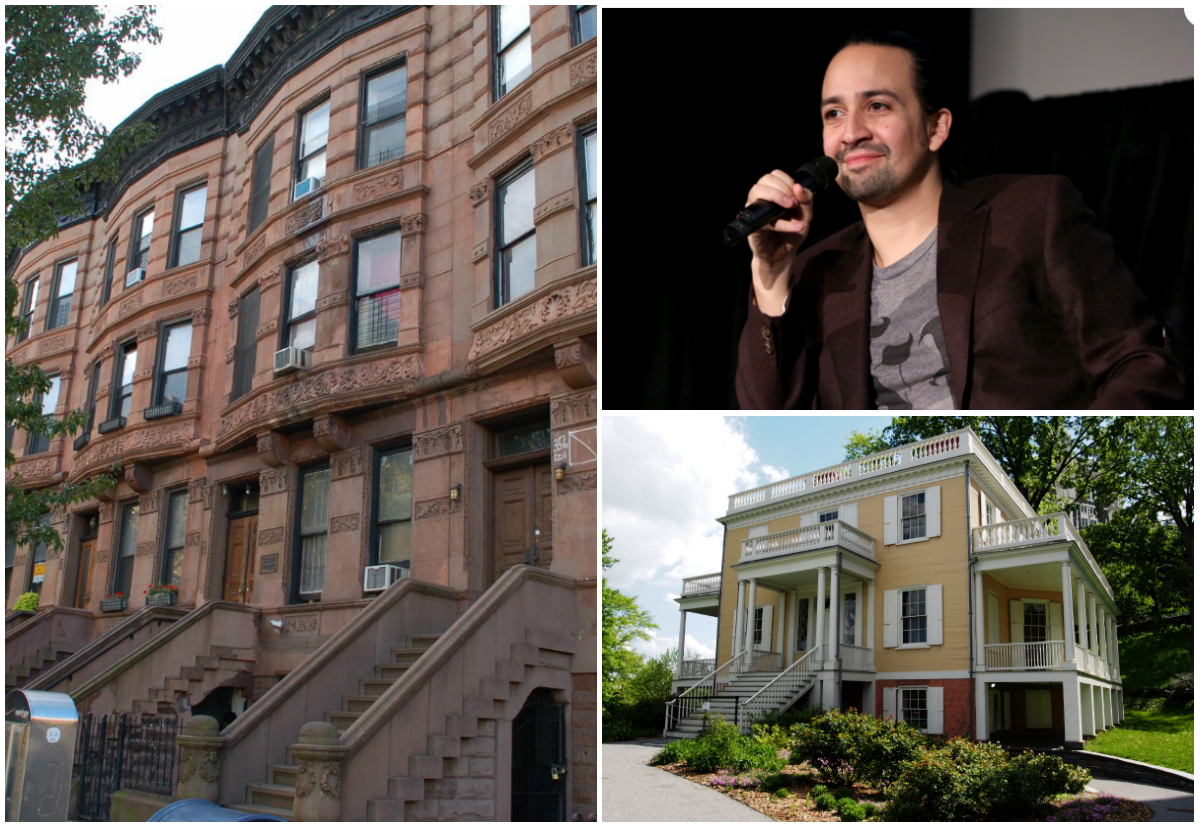 From left to right, an image of brownstones in Hamilton Heights, Lin-Manuel Miranda and the Hamilton Grange on West 141st Street. (Credits: Flickr, Getty, Flicker)

“Having that mansion up there ties it in with what the neighborhood was: the country. Even today, for people looking for more space in Manhattan, it’s still the place to get that,” Draper said. “And he built it for the views, to see the Hudson and East rivers. The guys in the past were thinking of views and fresh air. If they got sick, they believed fresh air was the cure.”

Draper will be speaking again this Sunday, April 17, at an Expo open house event called “Hamilton in the Heights” — which will also include a menu that would have been popular during the era of the fledgling democracy — at a three-bedroom apartment on the market for $1.875 million at 790 Riverside Drive, off of West 156th Street and not too far from Hamilton’s Grange.

The “Hamilton in the Heights” party was the brainchild of Corcoran broker Bruce Robertson, a Washington Heights resident who has steeped himself in the area’s history since moving from the Upper East Side to the area 15 years ago, where he said, “the pace of living is a bit slower and less crowded.”

He recently re-listed the 790 Riverside Drive co-op after taking the pre-war apartment off the market for about a month, renovating it, staging it by well-known designer Anne Kenney (a Washington Heights resident) and dropping the price by $100,000. 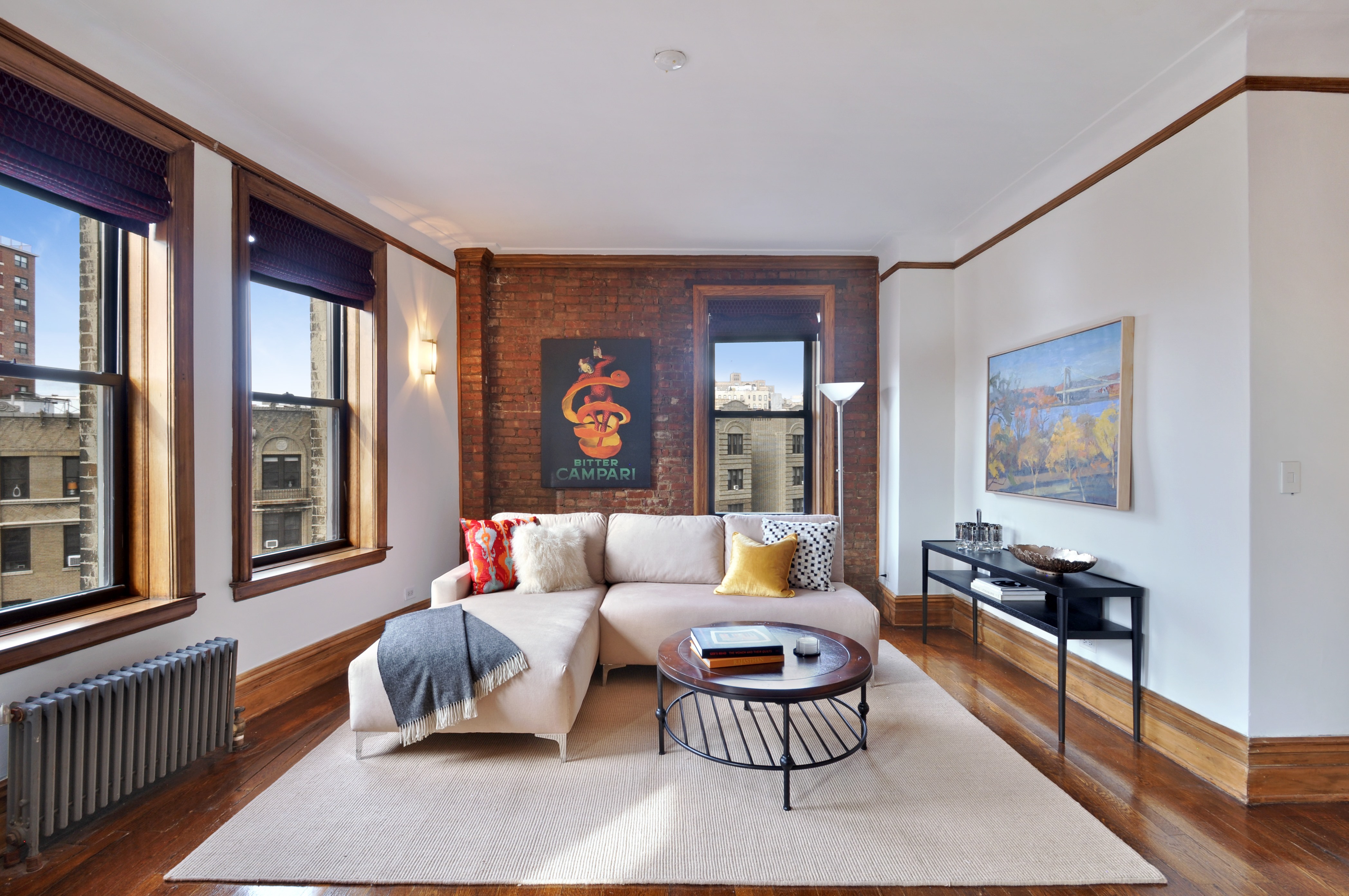 The living room of the three-bedroom at 790 Riverside Dr., listed by Corcoran for $1.875 million. Credit: Corcoran

He wanted to do some sort of re-launch party for the listing where he could invite buyers, brokers and neighbors to see the “new and improved” property, and the musical seemed like a fun theme not only for the area's Hamilton’s connection, but also because the musical was created by the homegrown Miranda, who also wrote “In the Heights,” about the area, Robertson said.

“By the way it’s presented with rap and hip-hop, ‘Hamilton’ makes history ‘hip’ and more relevant. People want to see some of the places where it really happened,” Robertson said.

“Coincidentally, my friend and Harlem resident, chef Joanna Pruess, told me she might create a George Washington dinner at the Morris-Jumel Mansion in July for their Independence Celebration,” Robertson recounted. “I said, ‘Wouldn’t that be the same food and drink Alexander Hamilton would have served at the Grange?’ ‘Of course,’ she said."

There has been very real effect in how the musical has driven more people to the area, said Robertson, who is involved in the community beyond real estate. He was recently appointed to Community Board 12 as a public member of the Business Development Committee and is a member of the Washington Heights Broadway Business Improvement District formation committee, which is in its final stages of becoming an official BID along Broadway from 155th to 178th Streets.

Besides an uptick in visits to Hamilton’s Grange — up a whopping 450 percent above what they were at this time last year, according to the National Park Service — there’s been renewed interest in visiting the Morris-Jumel Mansion, near West 160th Street, where George Washington hosted a dinner in 1790 with members of his administration, including his treasury secretary Hamilton, who quarreled bitterly with Aaron Burr, Roberston said. They famously dueled on July 11, 1804 in Weehawken, NJ, and the wounded Hamilton died the day after.

Robertson believes that “Hamilton” has spurred newfound interest in other local cultural venues like the United Palace of Cultural Arts where Miranda has been instrumental in bringing music and cultural events like free classic movies to the neighborhood. Miranda and his father, Luis A. Miranda Jr., are longtime founders and sponsors of the Northern Manhattan Arts Alliance, Robertson also noted.

“The show has brought Hamilton Grange, Hamilton Heights, Jumel Mansion and even Audubon Terrace to life and given them new meaning, and of course business. Sometimes when speaking to folks about our neighborhood they say "Oh, you live up there!"  So now The Cloisters isn't the ONLY cultural reason to go uptown,” Robertson said. 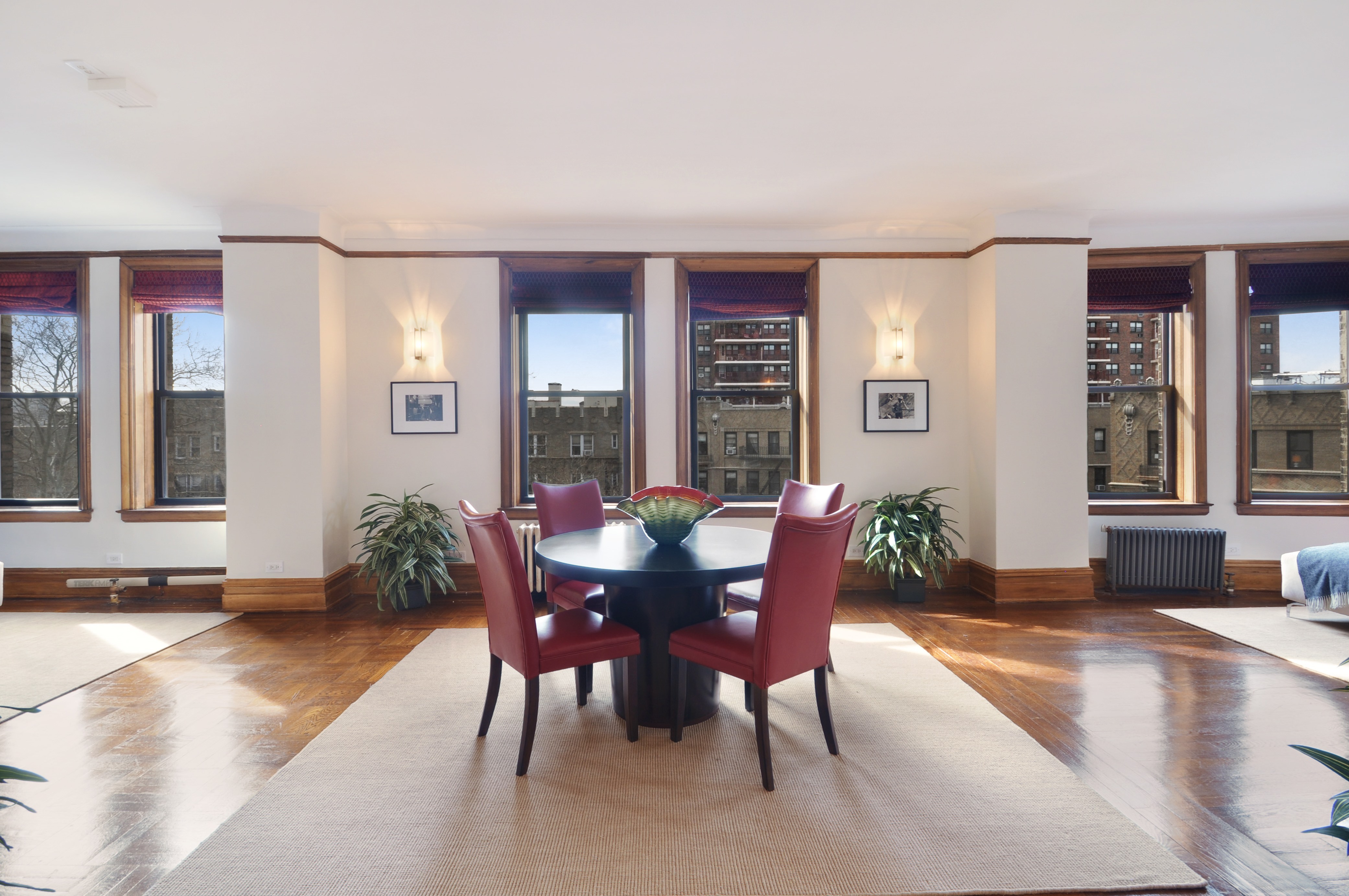 The dining area of of the three-bedroom at 790 Riverside Dr. Credit: Corcoran

For years, before the Broadway show made Hamilton a star again, historian Jimmy Napoli, of Outside In Tours, only gave private tours focusing on the father of the American national banking systems since he couldn’t get enough visitors to meet his 20-person public tour minimum. Now he’s booking public tours focused on Hamilton about six times a week.

Napoli moved to Hamilton Heights last year from Gramercy because of its rich history, and he wanted more space while still being able to stay in Manhattan.

“You get a lot more space here for a lot less money,” said Napoli. "We went from two windows to 10."

Though the median price in Upper Manhattan was significantly lower than the rest of the island — it was $628,217 compared to the Manhattan-wide median of $982,437, according to February data from Streeteasy — the area was the only to see double-digit price growth, rising more than 10 percent from the year before.

The search engine predicted that Upper Manhattan will be the most competitive area of the city for buyers, with sales prices expected to increase four times faster than citywide sales prices.

“It’s quiet uptown. Until ‘Hamilton’ came. Now it’s all abuzz,” Napoli said. “I think more people are interested in history, and there’s more of a community and spirit here keeping that history alive.”