By Leslie Albrecht |&nbspApril 8, 2016 8:30am
@ReporterLeslie
Twitter Facebook Email More
Democratic presidential candidate Bernie Sanders in the Bronx on March 31, 2016. A volunteer with the campaign is trying to launch a movement to preserve the campaign's Gowanus headquarters as a "political center" in Brooklyn.
View Full Caption
Andrew Renneisen/Getty Images

GOWANUS — He wants Brooklyn to feel the after-Bern.

A volunteer with Sen. Bernie Sanders' presidential bid says the campaign's Brooklyn headquarters in Gowanus should stay open after the April 19 New York primary so it can serve as a hub for "political revolution" in the borough and beyond.

Volunteer Nikolas Kozloff, who's been pounding the pavement on behalf of the Vermont senator's presidential bid for almost a year, launched an online petition and Facebook page this week calling on campaign decision-makers to maintain the office — on Eighth Street between Second and Third avenues — even after the Sanders operation pulls up stakes to prep for primaries elsewhere.

"There is a great need for a Gowanus political center and volunteers have invested a lot of time and effort in spurring the 'political revolution' in Brooklyn," Kozloff wrote on his petition. "The space could carry on Bernie's mission by taking up vital issues of concern." 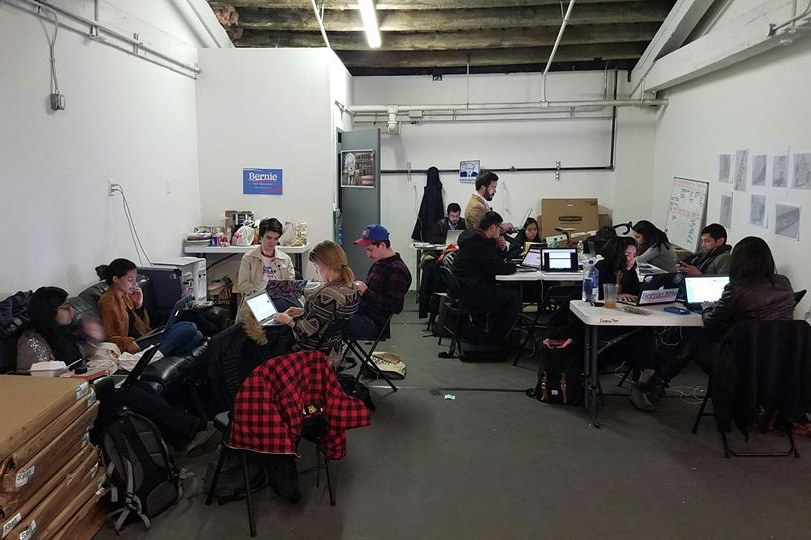 Kozloff said Brooklyn volunteers, many of whom are people in their 20s skilled in using databases, have been laying the groundwork for Sanders' bid for more than a year. It would be a waste not to use the infrastructure they've established to further the candidate's goals, Kozloff said. Sanders has called for making college free and battling income inequality and climate change.

The Sanders campaign opened the Gowanus office March 26 with a block party that included appearances by Kyp Malone of TV On The Radio.

"Ultimately what I'd like to see is for the Gowanus headquarters to take on another signficance," Kozloff said. "I think the location is a stroke of genius. It's a little deserted around there, but if you managed to tap into the millennial energy or the hipsters around there, you could get a lot of people to show up for a lot of purposes."

Kozloff said the office could become a permanent location that could deploy volunteers to nearby states, host political talks and offer "political education."

Kozloff, a 47-year-old freelance political writer and photographer who lives in Park Slope, said volunteering with the campaign has been an eye-opening experience.

"Most of the Bernie volunteers are either 20 years younger than me or 20 years older," Kozloff said. "It feels a bit odd, but it gets you out with people of a different generation."

The Sanders campaign did not immediately reply to a request for comment.

P.S. 191 Ranks as One of Manhattan's Most Dangerous Schools, State Says