Manspreading Through the Ages: MTA Explains How 'Transit Etiquette' Evolved

Train behavior on your daily commute may not be quite as stellar as you’d like. In fact, it might be rude as heck, sort of nasty, downright gross or, too frequently, violent.

But, despite our current commuting nightmares, subway etiquette awareness is actually going through something of a golden age. (No, really!)

The MTA posters that let commuters know that self-immolating hoverboards are now illegal on public transit in the city are the most recent installment in the hey-be-a-person “Courtesy Counts” safety campaign. So far, the ads have told off showtime, said no to clipping and primping and got “manspreading” in the Oxford English Dictionary without ever saying the word.

The campaign, begun in 2014, was the first time the transit agency did a “a holistic, full-car branding” around etiquette, according to Connie DePalma, chief of communications for the MTA. But advertising rules for subway behavior is nothing new, according to a new exhibit on the subject, “Transit Etiquette,” on view now through July at the Transit Museum’s Grand Central Terminal annex.

The exhibit documents the many ways public transportation systems have tried to get passengers to behave themselves through the ages, from Tokyo to Toronto. It includes examples from New York throughout the 20th century, including a vast array of the precursor to the manspreader, known for decades as “the seathog,” or “big burly guys taking up seats,” according to Paul Fleuranges, vice president of communications for the MTA.

DNAinfo New York spoke with Fleuranges and DePalma about how the current courtesy campaign got off the ground, the real name for those “bathroom door” poster characters and their own commuting pet peeves:

The following interview has been condensed and edited for clarity.

How did the MTA choose which complaints, peeves or behavior issues to include in the “courtesy” posters?

DePalma: What we did was, we looked back in our files … The whole issue of manspreading was something that dates back from those historical subway ads. Backpacks were a huge one as well.

As Paul said, the nail clipping drives me crazy when I hear it. I don’t have to see it. And the whole thought of somebody doing something that should be done in the restroom, you know, is kind of disgusting.

Can you elaborate on how “manspreading” showed up in the past? What’s the history there?

DePalma: I believe it was called "seathog."

Fleuranges: Normally, the guys they showed were these big burly guys taking up seats. Not only was it something they showed that had a negative impact on female riders, but also other male riders who were more courteous, more respectful. So, that whole seathog thing has been around … I think it’s important that, in this campaign, although the manspreading image got the most play, this was not a manspread campaign. It was a courtesy campaign. And I’d further note, we never used the word manspread.

Was that a conscious choice? Why not use that word?

DePalma: The whole feeling behind the campaign was to be edgy and fun, not really to admonish. So we took a cue from the manspread term… for instance, the manspread headline was “stop the spread, please” and Paul added “dude” and then we added “it’s a space issue.” Each one of the behaviors had their own scenarios and a way evolving and it was very much a collaborative effort ... We definitely wanted to be fun, but at the same time a bit edgy.

Fleuranges: A bit edgy. As you know, we’re not edgy at all. We’re pretty stodgy. But this was pretty edgy for us. 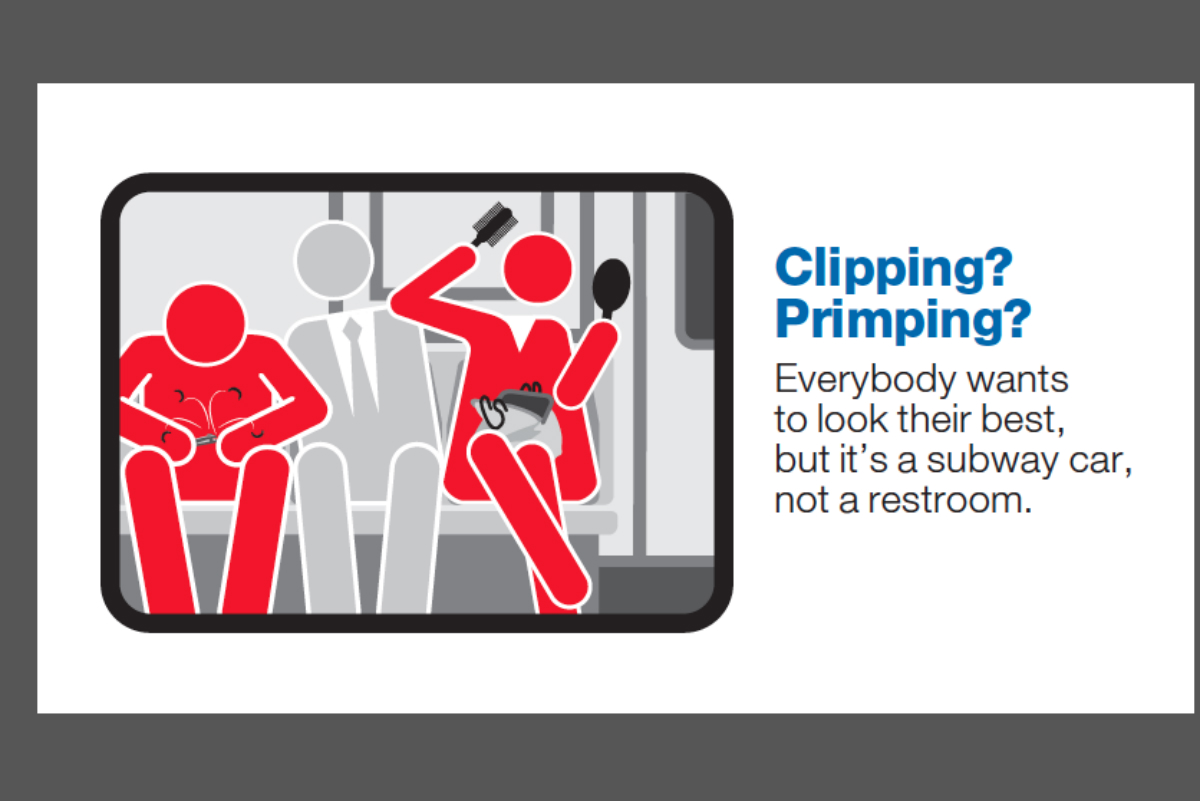 The "Courtesy Counts" campaign started in January of 2014. (Used with permission of the Metropolitan Transportation Authority.)

How did you decide to go with the bubbly, stick-figure-esque characters for the campaign? Were any other designs considered?

DePalma: The iconography or the pictogram of those people have appeared in our train cars for years on the decals — “Do not lean on door” — but not quite as bubbly. We started out looking at those simple labels and said, you know what, we’ve already introduced these characters in their red and green forms in our safety messaging [designed by the MTA's recently retired Director of Graphics, Rick Stewart]… and we decided, let’s bring them to the forefront.

Do you have a name for them?

The “showtime” sign in particular got a lot of pushback, especially from dancers themselves … What has the reaction been from your perspective to that sign? And do you think it’s made a difference in reducing “performances” on subway cars?

Fleuranges: There would be no way for me to measure whether or not it had an impact on performances. Enforcement would have more impact on performances. Look, I’m from the original generation of hip-hop, right, so I have no problem with beatboxing and dance … But a crowded subway train is not the place to do the dance and that’s what we were trying to say. You know, just not here. It’s not a place for showtime. Because you know we’ve heard stories and seen certain people getting kicked in the face. What they do is amazing, it’s just not the place to do it.

Will there be new posters coming out any time soon? Any other bad behavior to highlight?

Fleuranges: Maybe. It’s been up since December of 2014. It’s been up a while. Look, I’m sure there are more behaviors we could highlight.

DePalma: We do have them.

Fleuranges: We have a whole list. We might refresh it at some point, but nothing that’s on the immediate horizon.

What etiquette issues or peeves in particular would you have liked to include in the campaign?

DePalma: We try to get into the behaviors that were peeves, but also have an impact on our service. People going up and down the stairs, for instance. We were also looking at one that’s more of a peeve where certain people who were trying to get a Wi-Fi signal would stop dead in the middle of the staircase and block it.

What’s your number one peeve while you’re riding?

Fleuranges: People eating on the train. I think that’s god-awful disgusting. People who eat full blown meals … it’s just, no. No! I don’t need that. And then they leave it.

The “Transit Etiquette” exhibit opened March 15 at Grand Central Terminal and will be on view through July. For more information, visit mta.info.