MANHATTAN — It’s a dream of many New Yorkers to have their own slice of outdoor green space to escape the concrete and crowds.

With spring approaching and more of us thinking about flower boxes or herb gardens, here are eight buildings — some that are still under construction — that have lush secret gardens to give some inspiration. 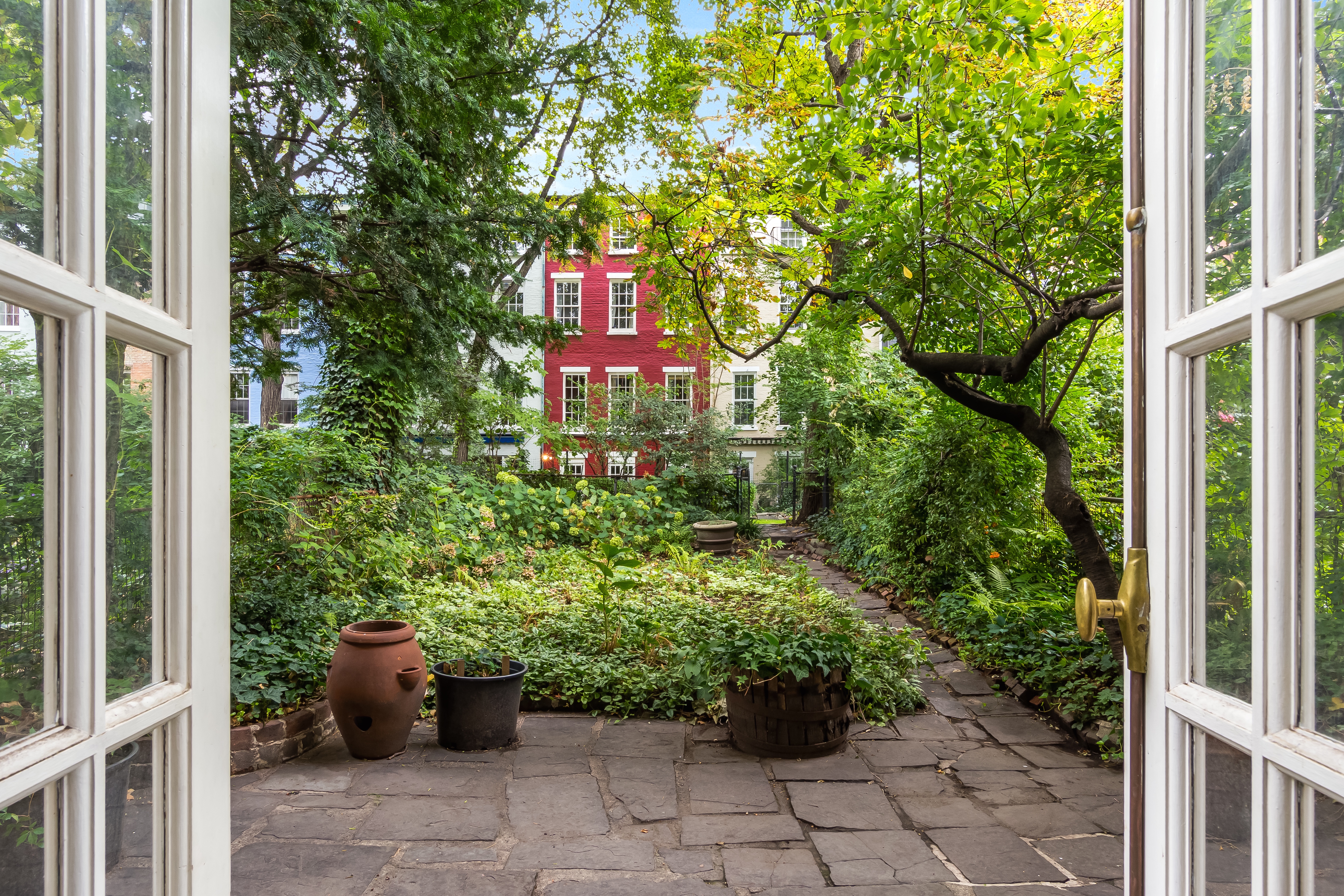 This central court between more than 20 row houses on MacDougal and Sullivan streets — a few blocks from Washington Square Park — was designated an official landmark in 1967. It is one of the few central gardens, along with the Turtle Bay Gardens and Sunnyside Gardens' courts that are official historic districts, according to the city’s Landmarks Preservation Commission.

The communal garden was part of the renovation in the 1920s of what were dilapidated “slum”-like  row houses from the late 1800s into “attractive, moderately priced housing for ‘writers, businessmen, artists, actors and musicians,’” according to the LPC designation report.

“MacDougal Sullivan Garden’s successful formula has been imitated many times,” said Andrew Berman, of the Greenwich Village Society for Historic Preservation, “and had a huge influence both on urban planning and on the transformation of Greenwich Village from a somewhat down-at-the-heels community to one of the most sought-after neighborhoods in which to live in New York or the world.”

The block’s former residents include Bob Dylan, Jimi Hendrix and Richard Gere, he added, and you can move here too, if you have a cool $14 million, which is the asking price for a five-bedroom townhouse at 82 MacDougal listed by Douglas Elliman. 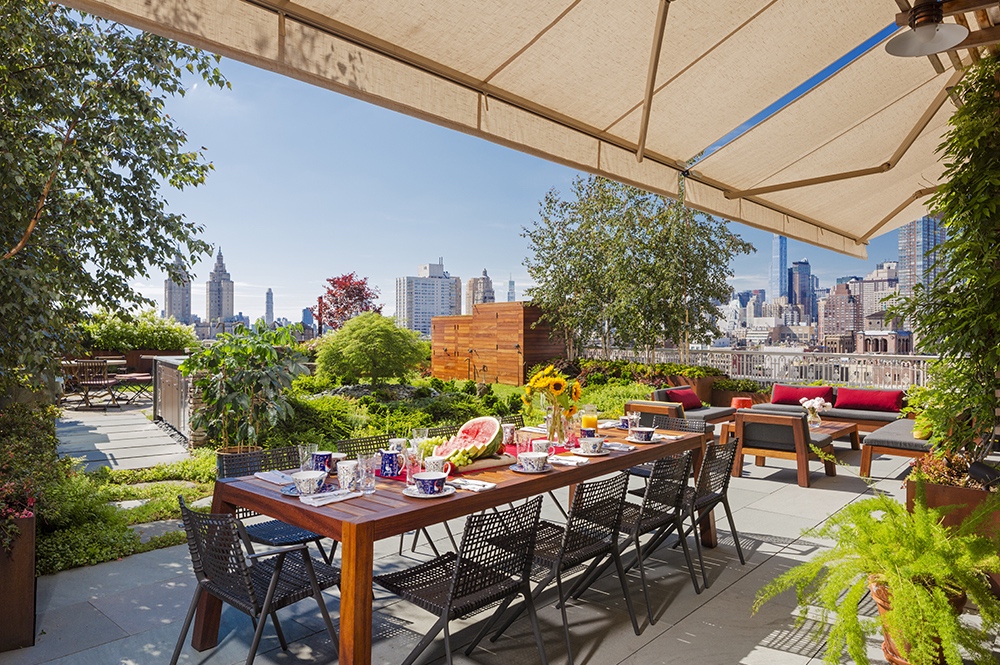 This 2,600-square-foot garden on the terrace on the 16th floor of an Upper West Side condo is so secret we can’t disclose its exact location but can tell you that its owner wanted a "real" yard without having to decamp to the suburbs, according to architect Andrew Franz, who worked on the project with New York Green Roofs.

They spent two years on the design and construction of this space, which included combining two adjoining apartments and their two outdoor terraces.

Because of the green roof’s size, the builders needed specially fabricated lightweight soil to minimize the structural load and needed to plan around roof drains to ensure they remained accessible, Franz explained.

The Department of Buildings approval process was particularly lengthy, as zoning required specific species of trees that would only grow to certain heights and have leaves less likely to clog drains, said Franz of the space planted with junipers and cypresses.

Based on the square footage, the construction of the garden, including structural work, lighting and electrical, cost approximately $500,000. 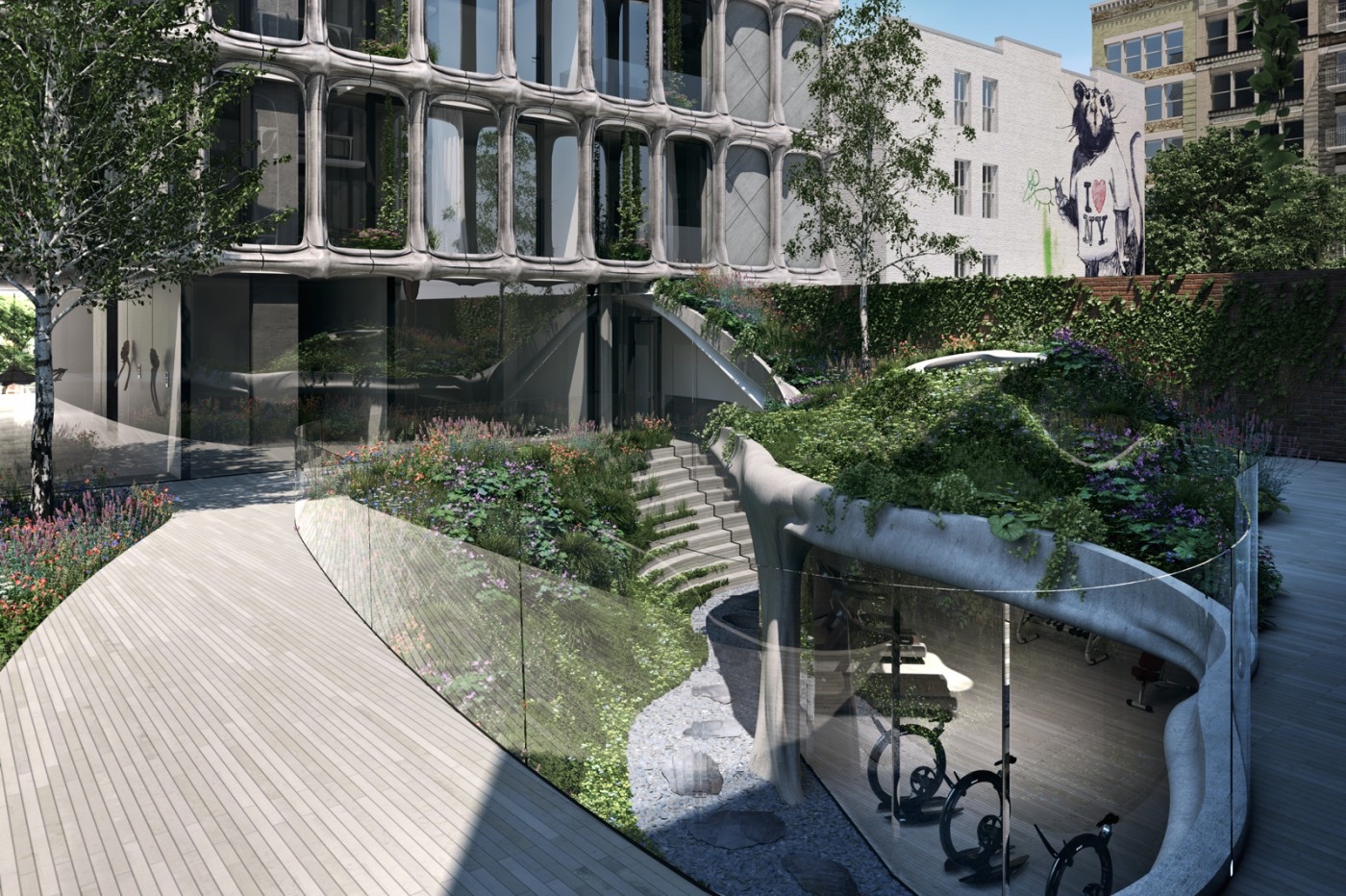 This former Tootsie Roll factory, re-imagined as a distinctive condo called XOCO (the Catalan word for chocolate), has an interior garden developed in partnership with the landscape firm Elevations “to evoke a natural landscape that one might have found prior to the construction of the city,” according to Peter Guthrie, head of design and construction at DDG, the building's developer. 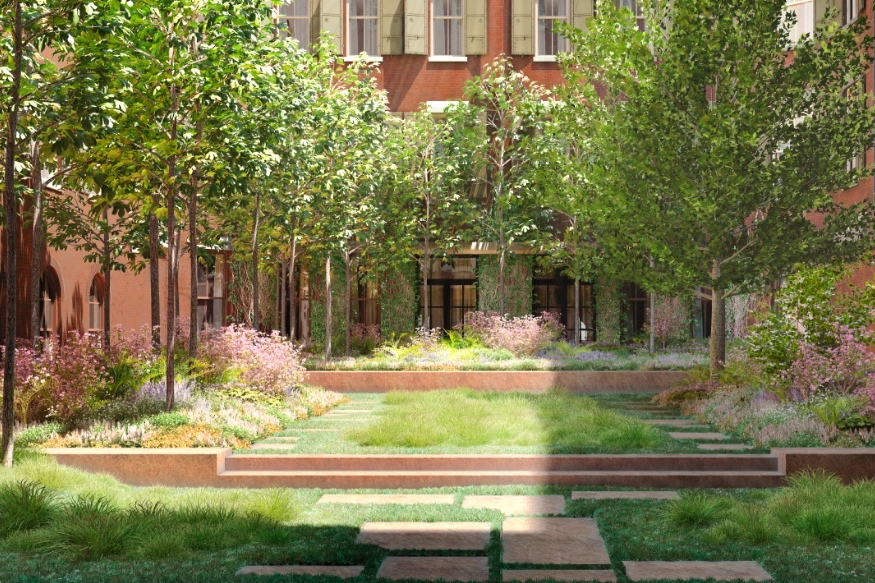 The planned courtyard at 443 Greenwich St., which will be nearly the size of a tennis court, will have 11 tulip trees that have a “rare [and narrow] columnar form” that will work well giving the spatial constraints, said Hank White, the landscape architectural consultant for the project whose firm HMWhite Site Architecture collaborated closely with CetraRuddy, the architecture firm that transformed the landmarked former book bindery into high-end condos.

The lack of direct sunlight was a design challenge, but the landscape architect used that as inspiration, looking to the lower Hudson River valley woodland as a guide in terms of the mix of flowers and fern under-plantings.

“We anticipate that the garden will spark a sense of familiarity while captivating wonder by its abstraction of its slice of a regional woodland landscape,” White said. 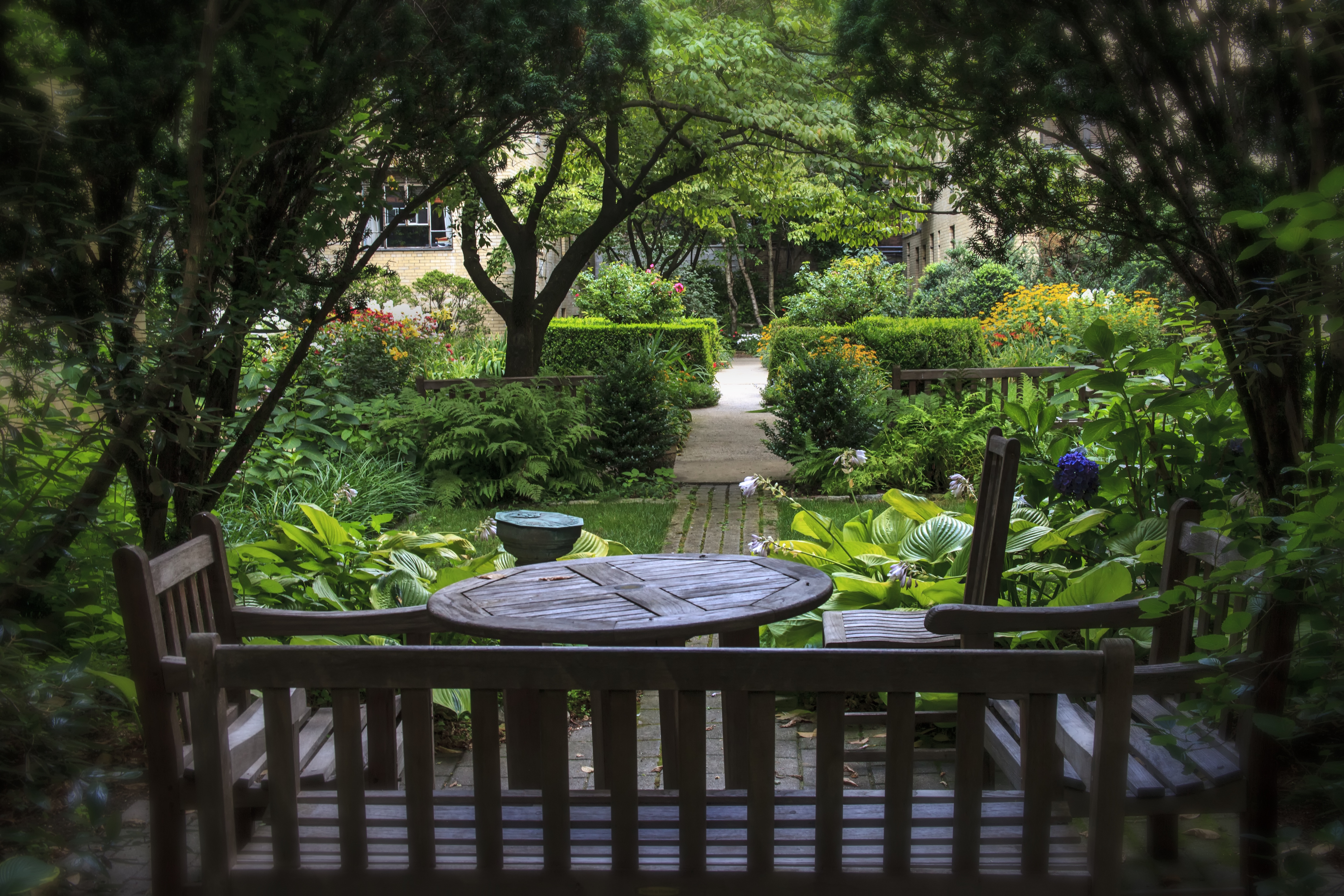 In order to get to the 24th Street building in Chelsea Gardens, a pre-war co-op that occupies an entire block, you have to enter at 255 W. 23rd St. and walk through this serene courtyard that changes color along with the seasons, according to residents.

The space, funded through the co-op and supplemented by annual voluntary donations, is maintained not only by building staff, but also professional gardeners and volunteers from the buildings. It’s always been a meeting place for residents to sit and relax, they say, and is, of course, a major draw to the building where a roughly 500-square-foot studio recently hit the market for $629,000. 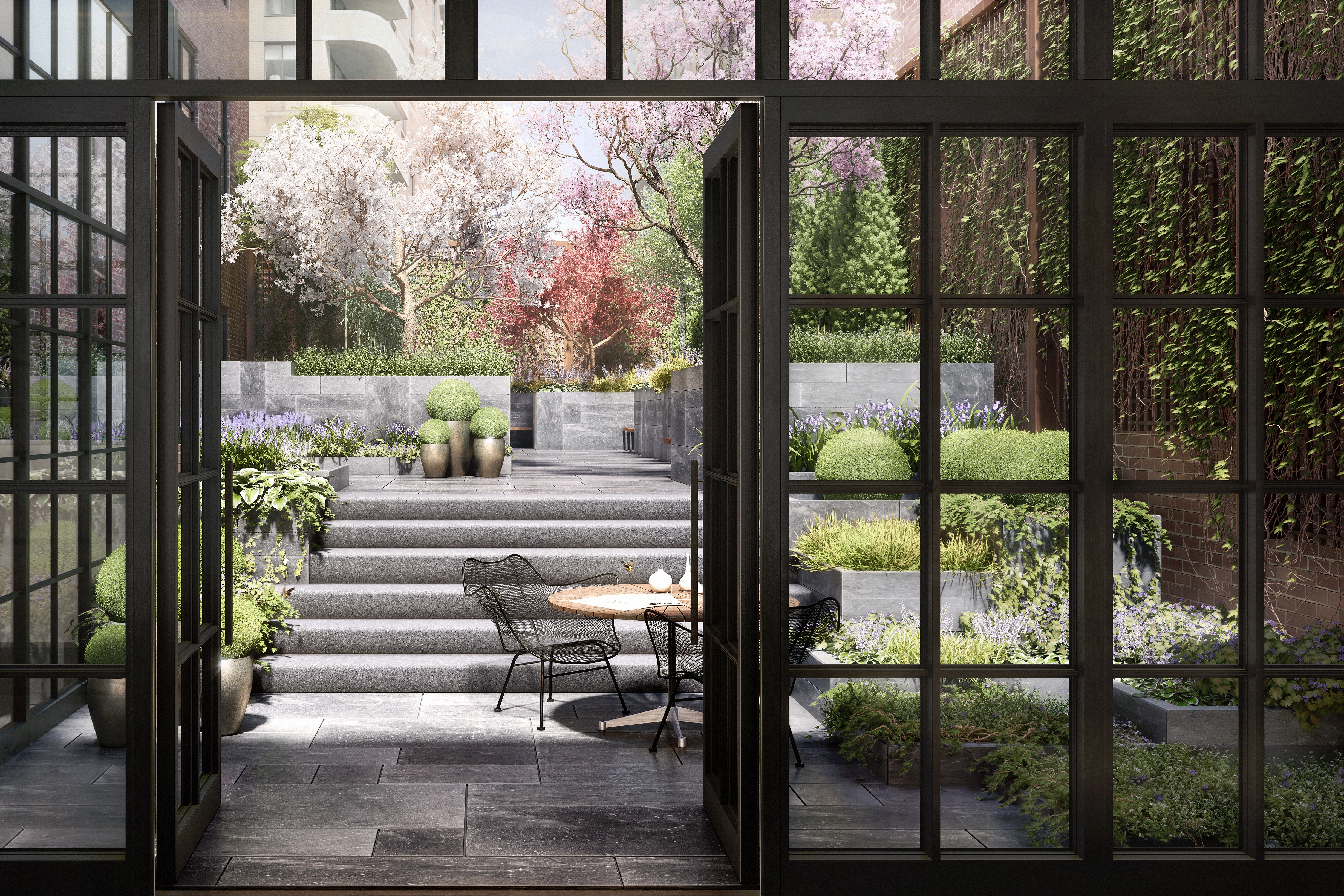 (Rendering of The Shephard)

Originally built in 1896 as a 12-story warehouse, the building was restored by developer Naftali into 38 high-end apartments with a roughly 1,700-square-foot communal garden space behind the lobby designed by landscape architect Thomas Balsey.

He’s also designing the lush 650-square-foot outdoor lounge space above the lobby, and will be available to the buyers of the Shephard’s three penthouses that each come with huge private terraces, complete with outdoor kitchens. 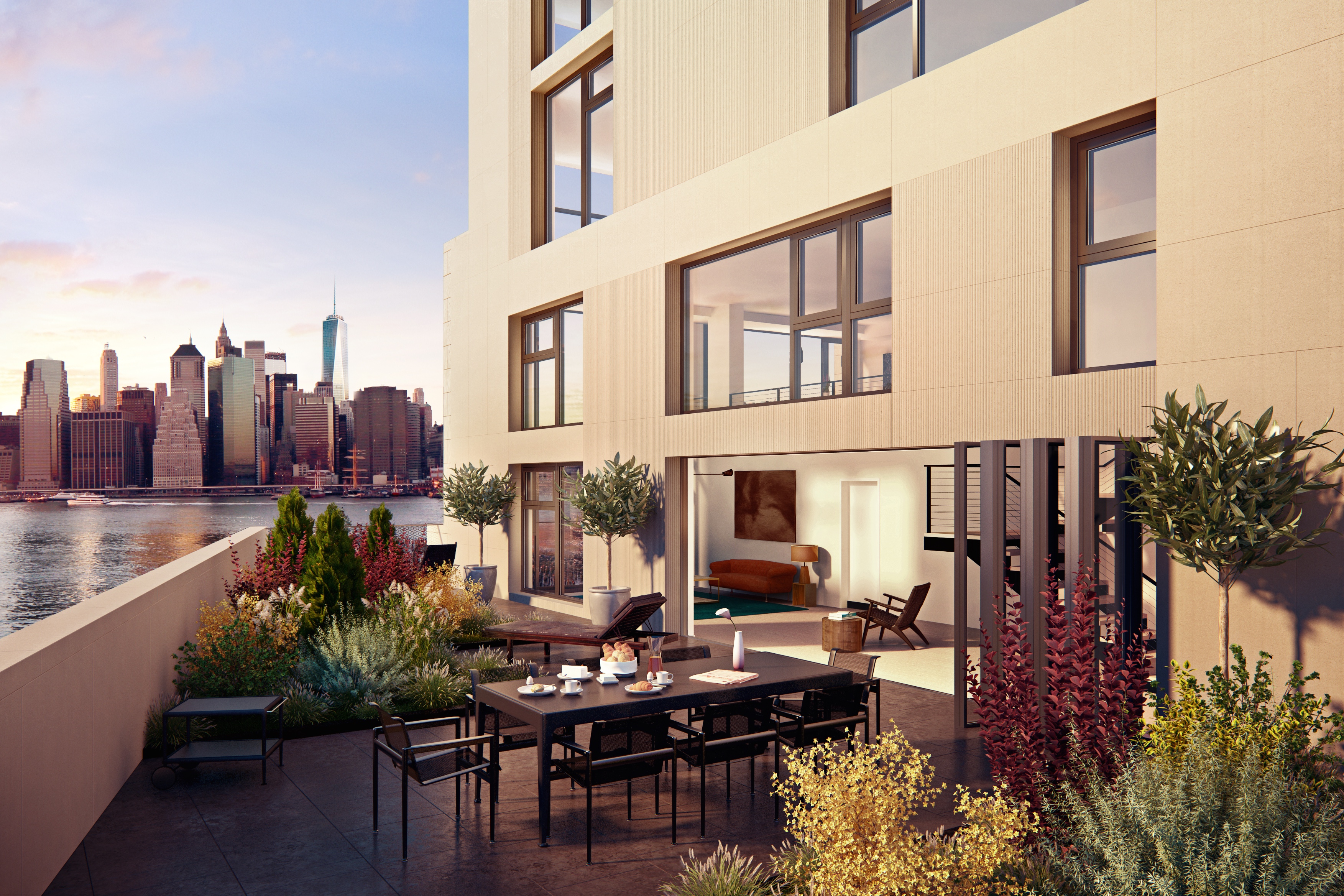 For the rooftops, the building will plant more than 500 trees and shrubs, accompanied by a range of ornamental grasses and herbaceous perennials. 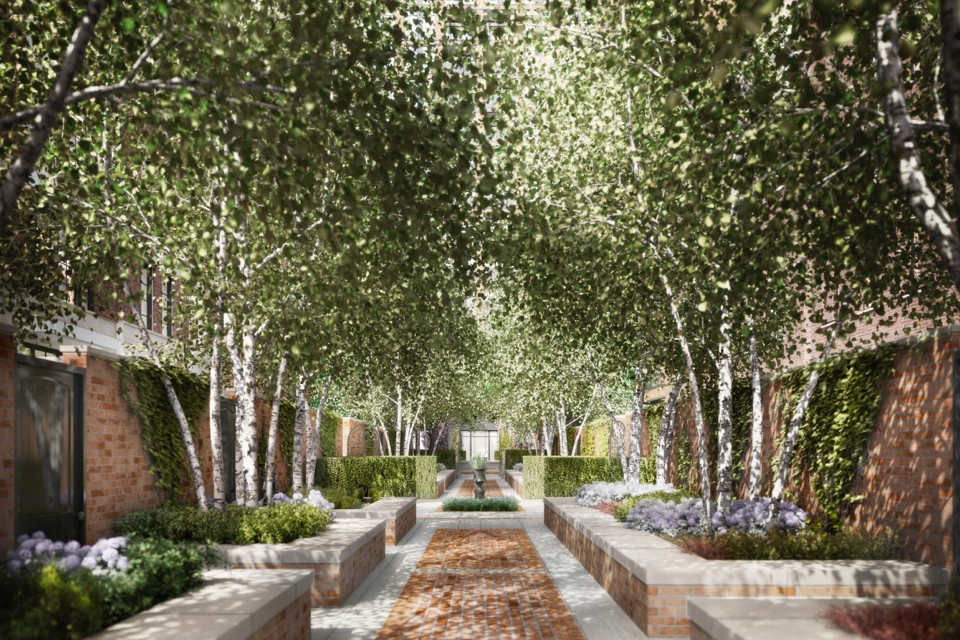 8. Courtyard at the Greenwich Lane, five buildings and five townhouses on West 11th and 12th streets, off of Seventh Avenue, West Village

This project, taking up an entire West Village block, includes historical restoration and new construction of several buildings located on the former site of St. Vincent’s Hospital that are organized around a verdant central garden, designed by M. Paul Friedberg & Partners.

The private green space will include a formal reflecting pool, a two-tiered fountain and two water walls. It will also have limestone benches, a trellised Italianate pavilion and a birch allee that will eventually create a shaded corridor in the 14,000-square-foot courtyard. All told, nearly 70 trees will be planted in the courtyard, according to the project’s reps.

The project is expected to be completed this summer.