By  Julia Bottles and Nigel Chiwaya

NEW YORK CITY — More than 100 years ago, the streets of SoHo, Chelsea, Flatiron and Gramercy — now home to some of the city's most expensive real estate — were so packed with brothels that a single block could be home to more than a dozen houses of ill repute.

Sex workers have been operating illegally in New York since before the Revolutionary War. In the early 19th century, prostitutes worked in Five Points — above present day City Hall Park — and along the East River. But it wasn’t until the middle of that century that prostitution concentrated in SoHo and formed the city’s first sex district.

While the districts moved northward over time, driven by available real estate, the manner in which johns found out about the districts remained consistent for decades: cheaply printed guidebooks meant to help them navigate streets packed with sex workers.

In the 1850s, patrons needed help finding the city’s illicit brothels that law enforcement mostly turned a blind eye to. The commercial light bulb hadn’t been invented yet so there were no “red-light” districts. 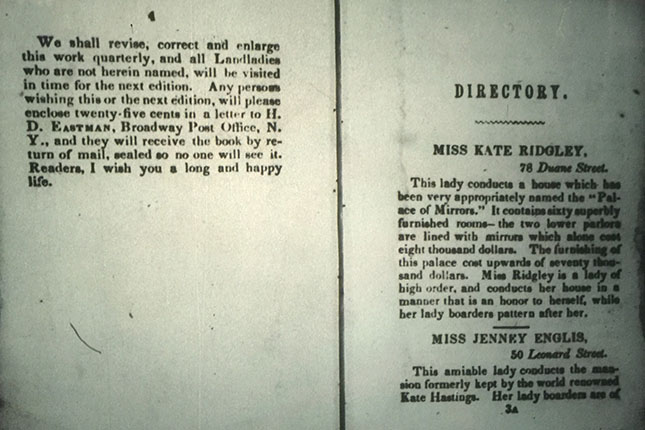 A detail of “Fast Man’s Directory and Lover’s Guide to the Ladies of Fashion and Houses of Pleasure in New York and Other Cities” (1853). Books like this helped patrons navigate dozens of New York City’s brothels.  (Courtesy of the New York Public Library)

These vest pocket-sized books would list a brothel’s address, proprietress's name and often a review. The write-ups — most likely paid for by the proprietress — would sometimes rate how classy the establishment was and how many women were employed.

A patron could also use these Yelp-esque guides to find “assignation houses” that rented out furnished rooms for unmarried couples or men looking to spend a short period of time with a prostitute he met in a theater, saloon or on the street.

By looking at four 19th-century gentleman’s guidebooks from the New York Public Library and the New-York Historical Society's collections, DNAinfo New York has mapped the development of Manhattan’s first sex district in the 1850s and its steady move north in the following two decades.

Housing was in constant flux: as the population grew and concentrated in an overcrowded Lower Manhattan, middle- and upper-class families fled north to modern-day Chelsea and Flatiron in search of space.

This exodus left many landlords below Houston with empty housing, and “the more entrepreneurial [were] able to convert them into brothels,” historian Timothy Gilfolye told DNAinfo.

The well-appointed, relatively new buildings with multiple bedrooms made the perfect “parlor houses,” higher-class brothels employing a small number of women and featuring private entrances that could only be accessed by men with appointments.

If a parlor house wasn’t an option, landlords might convert homes into illicit boarding houses, where upwards of a dozen women might have lived and worked as prostitutes.

These brothels worked in harmony with a burgeoning tourism industry in SoHo.

Hotels began springing up around the neighborhood to accommodate travelers, including the Metropolitan Hotel, the city’s first “monster hotel.” Located at Broadway and Prince Street, the Metropolitan opened in 1852 and occupied an entire city block. 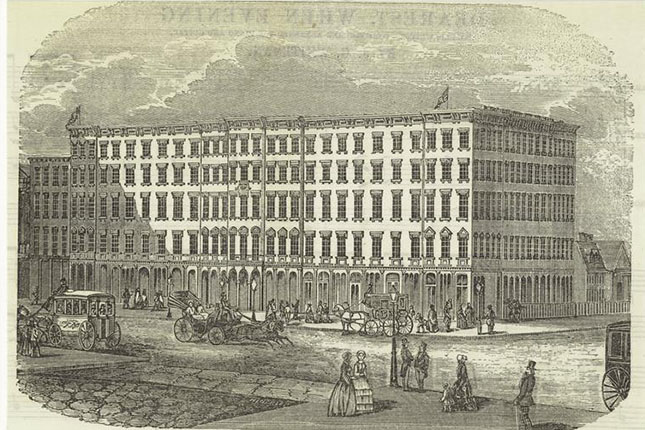 The Metropolitan Hotel, which stood at Broadway and Prince Street, opened on Sept. 1, 1852, and occupied an entire city block. (Courtesy of the New York Public Library)

An entire leisure district sprung up near those hotels to keep tourists entertained.

“There’s a movement of theaters up Broadway,” Gilfoyle said. “And there’s a number of restaurants and nightclubs that are then attached to the theaters.”

The madams and their prostitutes of the day setting up shop in SoHo, according to Gilfoyle, were “effectively following the movement of the theaters.”

“Beware of All Houses Not Recommended”

In 1853 men could rely on the verbosely-titled “Fast Man’s Directory and Lover’s Guide to the Ladies of Fashion and Houses of Pleasure in New York and Other Cities.”

The "Fast Man's Guide" lists the address and reviews of 49 parlor houses, many of them are concentrated along a few blocks in SoHo.

Cobblestone-lined Mercer Street might be home to boutiques today, but in 1853 at least 19 brothels were situated on the street. 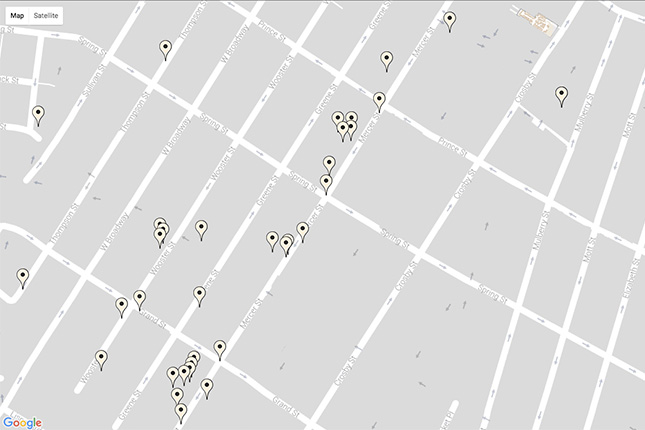 A detail of the brothels lining Mercer Street in the 1853. The SoHo street was one of the most popular locations for brothels due to the neighborhood's proximity to hotels, theaters and saloons. (Credit: DNAinfo)

Mrs. Williams' house at 25 Mercer St. was "gaining a great reputation" in 1853 with ladies who "are very agreeable company."

Mrs. M. Willoughby had a "very fine house" at 121 Mercer St. where "persons visiting her house will be treated with due respect." (Today it’s an outlet for an environmentally-friendly toilet design company.)

Amanda A. Parker at 101 Mercer St. was praised by the “Fast Man’s Guide” for running a house of roughly 12 “lady boarders” who were “mostly from the South."

The 1859 “Directory to the Seraglios in New York, Philadelphia, Boston and all the Principal Cities in the Union," noted approvingly that that Parker’s house was “within a few moments drive of the principal hotels.”

Reviews from the “Directory to the Seraglios” (Merriam-Webster defines a “seraglio” as a harem) also show that in a few years, brothels of note had spread through SoHo from Mercer Street to include Crosby, Thompson, Greene and Sullivan streets.

Miss Mary Temple’s “elegantly fitted up mansion” at 112 Greene St. was a place for “Gentlemen on a visit to the city, in search of private apartments, to wile away a few hours in splendor and luxury.”

The SoHo Building, with a Design Within Reach on the ground floor, now stands on that site. 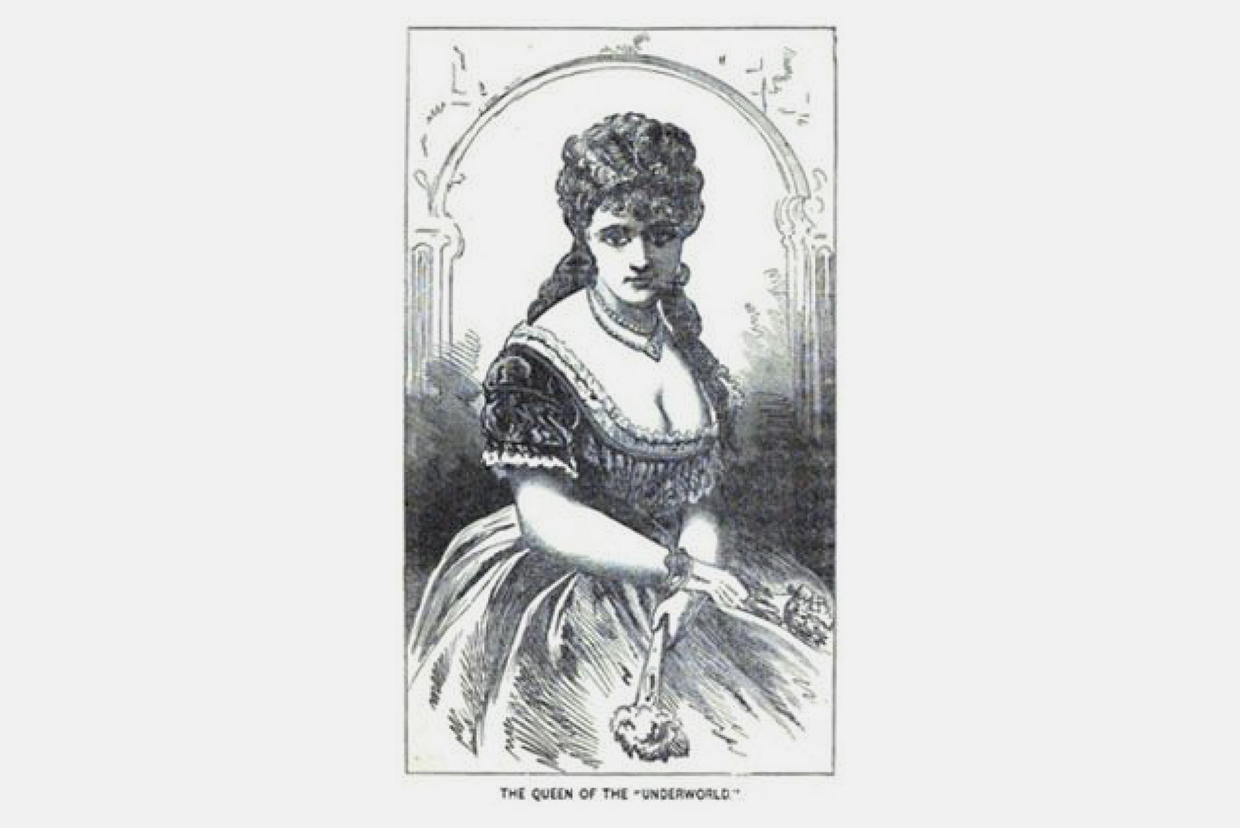 An illustration of a prostitute from George Ellington’s “The Women of New York, or The under-world of the great city.” (Courtesy of the New York Public Library)

These guidebooks weren’t always complimentary, including scathing write-ups of brothels “of the third class."

“The women at this house race the streets to pick up men and decoy them to this den where danger awaits them,” read the "Fast Man's” review Mrs. Todd’s house at 80 Mercer St. “Shun this resort for thieves.”

Some proprietresses who opened their doors to non-white customers earned harsh, racially-charged reviews in guidebooks. The "Fast Man's Directory" slammed Mrs. Wazner who kept a house at 51 Wooster St. for “letting colored gentlemen” visit. “Anyone can have run of the house for a dollar. If you respect yourself, shun this den.” (Today the site is home to “Fossil Interior,” a home decor shop.)

A New Home and a New Name

After the Civil War ended in 1865, New York went through another series of changes.

The city's population was closing in on 1 million people by 1870, and the theater district once again moved uptown to be closer to the wealthy who had decamped to what would become Chelsea, Flatiron, Gramercy and Union Square.

Just as in the 1850s, the middle- and upper-class families that could moved out of increasingly crowded neighborhoods, and this time settled into the Upper East and Upper West Sides. Left behind were well-built single-family homes that brothels again easily transitioned into, according to Gilfoyle.

The new tenants brought new nicknames for these neighborhoods: North of 23rd Street between Gramercy Park and the Hudson River became “the Tenderloin.”

The term has been attributed to NYPD Sgt. Alexander “Clubber” Williams, who, upon being transferred to modern-day Chelsea, declared “I’ve had nothing but chuck steak for a long time, and now I’m going to get a little bit of tenderloin.”

The idea was that the district was so full of opportunities for a policeman to make a dishonest living stuck to the neighborhood and beyond, as “The Tenderloin” would later become the generic name for sex districts across the country. 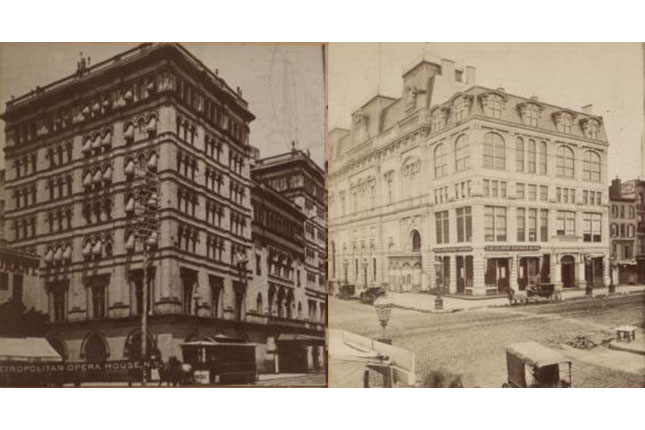 “The Gentleman’s Companion” from 1870 and the “Gentleman’s Pocket Directory, For 1876-1877” — a coy guidebook that listed brothel addresses but no reviews — gave readers dozens of Tenderloin parlor houses to choose from, but it also listed some in SoHo, a nod to the days when the neighborhood was the city’s main destination for sex workers.

Mrs. Lizzie Goodrich at 128 W. 27th St. had five women working "whose cheerful dispositions tend to drive away the blues."

Moving southeast through the city, the area around 14th Street from Third Avenue to Broadway and Union Square —  known as the Rialto — also became an entertainment district centered around the Vaudeville theaters.

Miss Fanny Phippany’s Rialto establishment at 36 W. 15th St. was harshly criticized in “The Gentleman’s Companion” for having a “landlady of a very selfish disposition.” The reviewers didn’t think much of her household staff either, calling them “very disagreeable to visitors.” 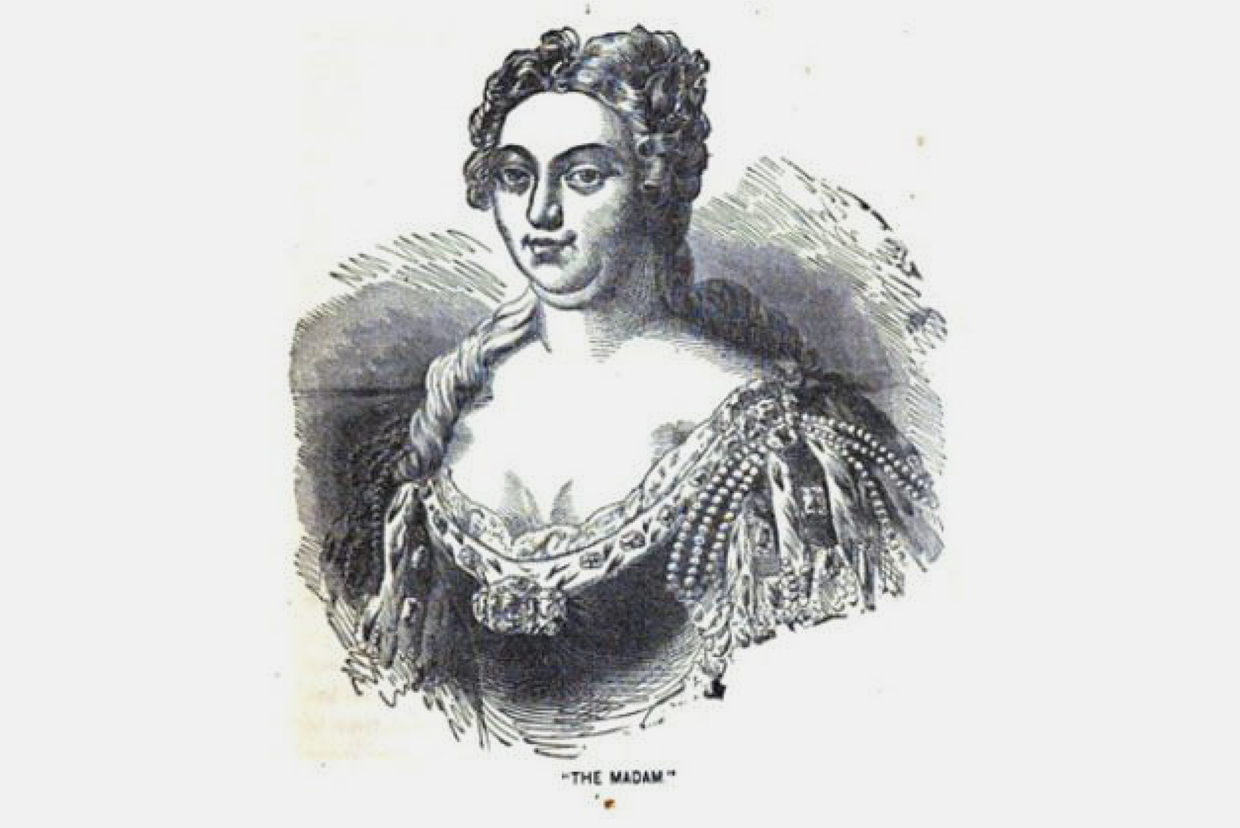 “The Madam” from George Ellington’s “The Women of New York, or The under-world of the great city” (Courtesy of the New York Public Library)

The Death of the Sex District

The Metropolitan Opera House was built in 1883 at 39th Street and Broadway, right in the heart of the Tenderloin. Just around the corner there were 12 to 15 brothels ready for theatergoing gentlemen to visit after a show let out, Gilfoyle said.

Although there are records of arrests and grand jury indictments for operating brothels during the last two decades of the 19th century, the gentlemen's guidebooks of that period don't appear to have survived, according to Gilfoyle.

It’s clear though that the heyday of the New York brothel had passed by the close of the century. Many of the old parlor and boarding houses in SoHo were knocked down to make way for the mixed-use buildings that still stand in those neighborhoods today.

"Most of those houses in SoHo were ultimately torn down and replaced with cast iron five- or six-story structures, so very little of that physically, visibly remains," said Gilfoyle.

Pushed out of their old neighborhoods, brothel owners scattered across New York City, and by the 1920s, prostitution had gone underground in part due to progressive reform laws. The popularization of the telephone in the early 20th century also made it easier to discreetly arrange for paid sexual encounters, according to Gilfoyle.

“The prostitute would oftentimes come to the client, whether at a house or a hotel," Gilfoyle said.

Ultimately there was little need to visit an old-fashioned, 19th-century-style brothel — or the sex district that housed it — when a call girl could come directly to you, he added.

These Neighborhoods Had the Highest Rent-Stabilized Unit Turnover (MAP)

See Where 59 Citi Bike Stations Are Planned For Astoria [MAP]

This Neighborhood Got the Most Parking Tickets in NYC Last Year

You Can Still Find a Deal on a Home in East Flatbush, Analysis Shows

See How the City's Homelessness Crisis Affects Your School

Love by the Numbers: See How New Yorkers in Your Neighborhood Use OKCupid

Compare What Luxury vs. Non-Luxury Units Cost in Your Neighborhood

Looking for a Roommate? See Where Shared Apartment Rents Are Rising Fastest

Staten Island Chuck vs. Punxsutawney Phil: Who's the Better Forecaster?