By Rachel Holliday Smith |&nbspFebruary 25, 2016 6:48pm
@rachelholliday
Twitter Facebook Email More
The developer of the Pacific Park/Atlantic Yards complex are hoping to build an office tower on this corner of Atlantic and Sixth avenues behind the Barclays Center, they announced to residents this week. The change would need state approval.
View Full Caption
DNAinfo/Rachel Holliday Smith

Representatives of the developer, Greenland Forest City Partners, shared a rough sketch of the plan with residents at a public meeting Wednesday, focusing on two sites surrounding the Barclays Center: 580 Atlantic Ave., currently occupied by Modell’s and P.C. Richard & Son, and a lot at the southwest corner of Atlantic and Sixth avenues directly behind the arena known as B4.

Currently, usage of the B4 site is limited to residential and “some retail” by a state-approved project plan, said GFCP spokeswoman Ashley Cotton. But the company is hoping the state will allow office space to be built there by shifting commercial rights — previously reserved for another Pacific Park building, 461 Dean St. on Flatbush Avenue — to the Atlantic Avenue site.

“We elected to do residential [at 461 Dean St.] instead. So, now we’d like to examine potential commercial use along Atlantic Avenue, instead of Flatbush,” she told residents at the community update meeting Wednesday night. 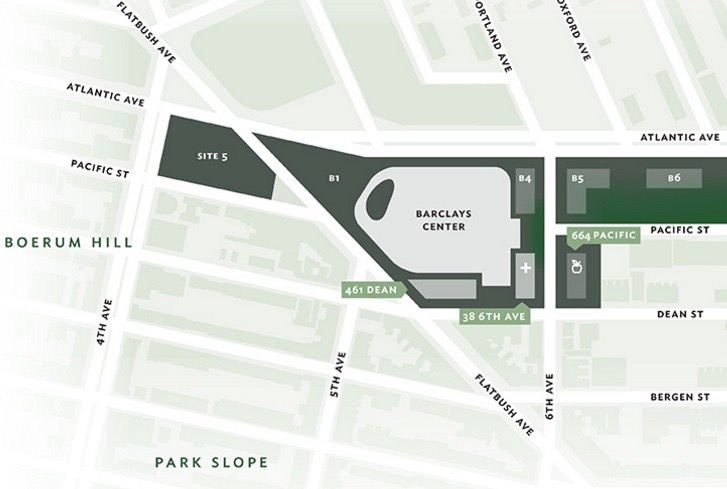 The two office towers proposed by Greenland Forest City Partners would be built on Site 5, located directly across the street from the Barclays Center, and B4, located on the southwest corner of Atlantic and Sixth avenues behind the arena, shown on this partial map of the development. (Image credit: Pacific Park)

The B4 building would act as a bookend, she said, to a much larger building GFCP is planning to build nearby. That tower, at 580 Atlantic Ave., or “Site 5,” would use up to 1.1 million square feet of air rights currently controlled by the developers in front of the Barclays Center — where the subway station, plaza and distinctive “oculus” feature on the arena are now located — combined with 439,000 buildable square feet currently allowed on Site 5.

If the air rights transfer is approved by the agency that oversees the project, the Empire State Development Corporation, the resulting tower could be up to 1.5 million square feet, Cotton said.

GFCP shared no renderings, designs plans or height estimates for either building. Dismayed residents at the meeting tried to visualize what such a building would look like; one suggested comparing it to an 18-story Pacific Park building, 535 Carlton Ave., currently under construction at the corner of Carlton Avenue and Dean Street, about a fifth of the potential square footage of the planned Site 5 building.

Cotton stressed that the changes in usage for both sites will add “no extra square footage” to the complex and will not change “in any way” the 2,250 units of affordable housing to be built within Pacific Park. Affordable units previously planned to be built within B4, she said, will be accommodated elsewhere in the complex.

A precise timeline for the project is unclear. The proposed changes at Site 5 will require an environmental impact study, Cotton said, and approval from the ESD board. But the developers are eager to “move this thing," she said.

“Our planners… think it’s a good idea and we want to move this quickly, so if we could get a scoping hearing this spring, that’d be great,” she said. “But … obviously, it takes a lot of process to get there.”

In addition, before any potential construction begins at Site 5, the state must seize the property through the use of eminent domain on behalf of the developers. An official for ESD said the agency has made offers to purchase the property, but no formal application to condemn the lot has yet been made.

The ESD official also said a review of the project plan, including public hearings, would begin when the developers officially present a proposal about the transfer of development rights to the agency, which they have not yet done, he said.