Red Hook East and West Houses have been allocated $438,213,000 from the Federal Emergency Management Agency for restoration and resiliency work to buildings damaged by Hurricane Sandy in 2012.

The proposed work, which is expected to begin later this year through the New York City Housing Authority's recovery program includes restoration of playground areas, sidewalks, roofs, flooring and hardware in lobbies, replacement lighting in stairwells and back-up power generators, officials said Monday night at a community forum attended by about 50 people.

KPF, the architecture firm behind the project, presented the latest iteration of designs and conceptual renderings to the neighborhood after taking feedback from the community during the summer.

But some residents criticized the focus on exterior repairs when apartment interiors still faced issues like mold and water damage. In July, an audit of NYCHA by City Comptroller Scott Stringer found that citywide, the agency had a 55,000 work order backlog and would routinely close out non-emergency requests if residents were not home when workers showed up.

According to tenant Misha Johnson, 35, the city had already completed some roof repairs and restoration of brick facades.

"They need to focus on interiors before they fix the roof," she said. "They're going to fix roofs that were already fixed?"

"Sandy happened a long time ago but for us it was like yesterday."

Red Hook was hit hard by the deadly storm in October 2012. Streets, homes and businesses were inundated with floodwater, which also overwhelmed the sewer system, according to the New York Rising Community Reconstruction Plan. The Red Hook Houses, with 2,878 apartments, is home to about 8,000 of Red Hook's 11,000 residents.

Residents of Red Hook’s NYCHA buildings lived without heat and electricity for weeks, and some did not have running water for days, the report found.

The largest undertaking of the project is replacing the public development's temporary boilers that have been in use since Sandy. Earlier boilers were located in the buildings' basement but were irreparably damaged by flood water. 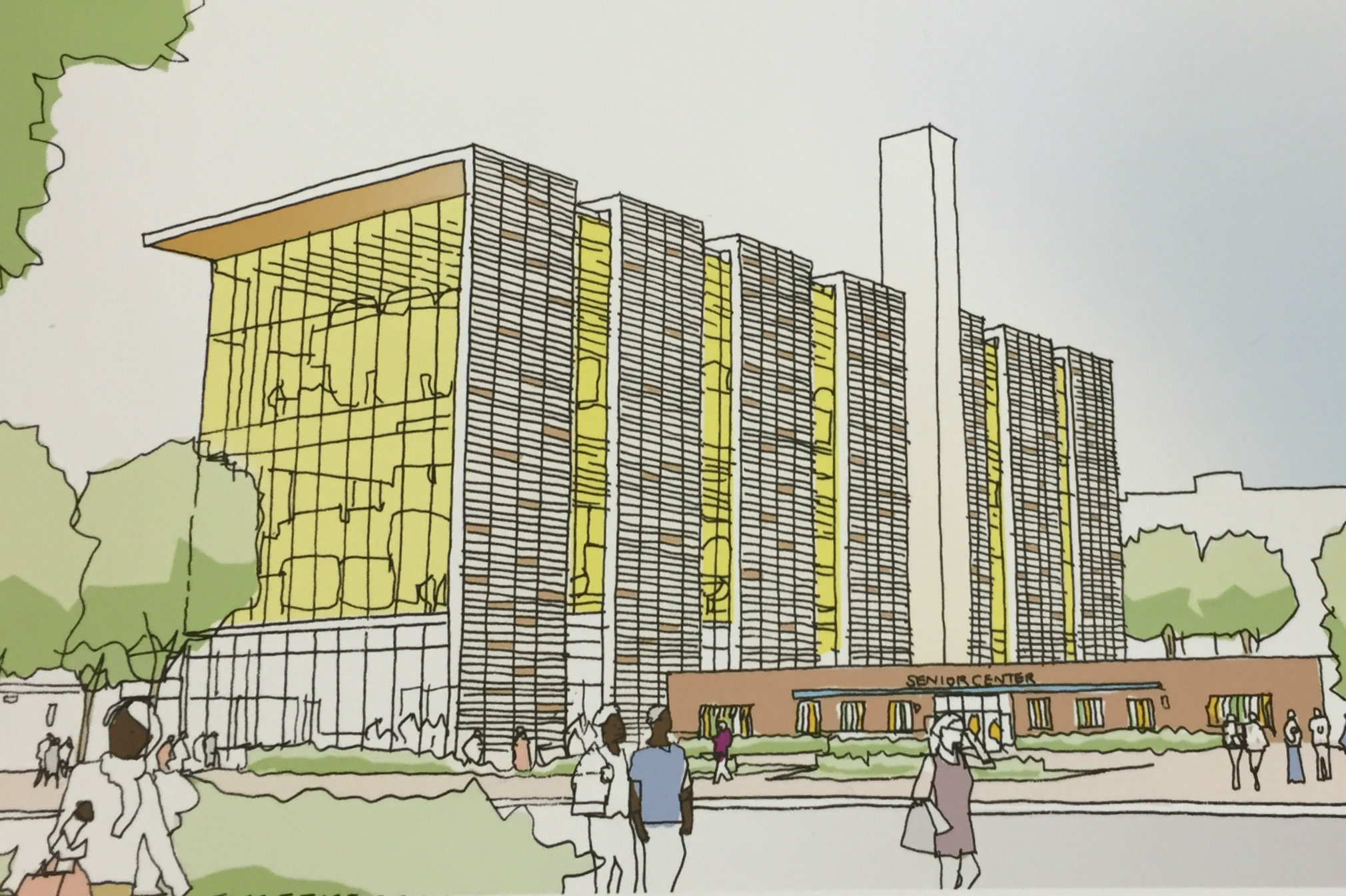 A conceptual rendering of the power plant. [Credit: NYCHA]

"Those trailers will disappear and we're going to build two new power plants," said Jill Lerner, a principal at KPF.

The two power plants will be built on Lorraine and Clinton streets on opposite ends of Red Hook Houses' land parcel.

In addition, 12 smaller "utility pods" will distribute power to the buildings. 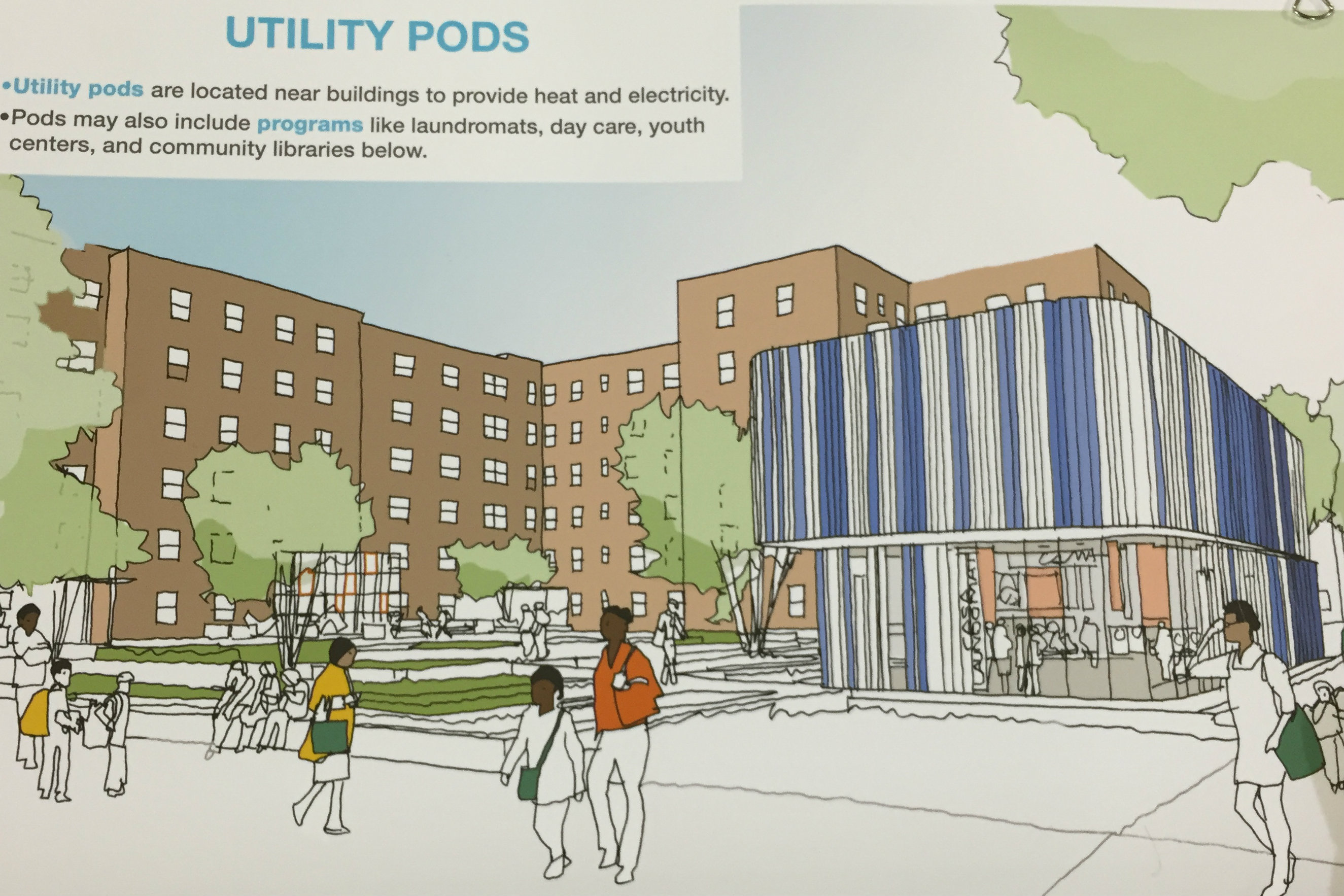 A conceptual rendering of the utility pods. [Credit: NYCHA]

The two-story power plant and one-story utility pod will be elevated to protect against future flooding events. The structures will be raised to a level high enough to accommodate retail, restaurants or community spaces like day care or a laundromat in the street-level space.

While the Lorraine Street power plant would be built in a currently empty area of land, the structure on Clinton Street near Mill Street may cause the demolition of shops and some residences, which will be relocated if the plan is approved. 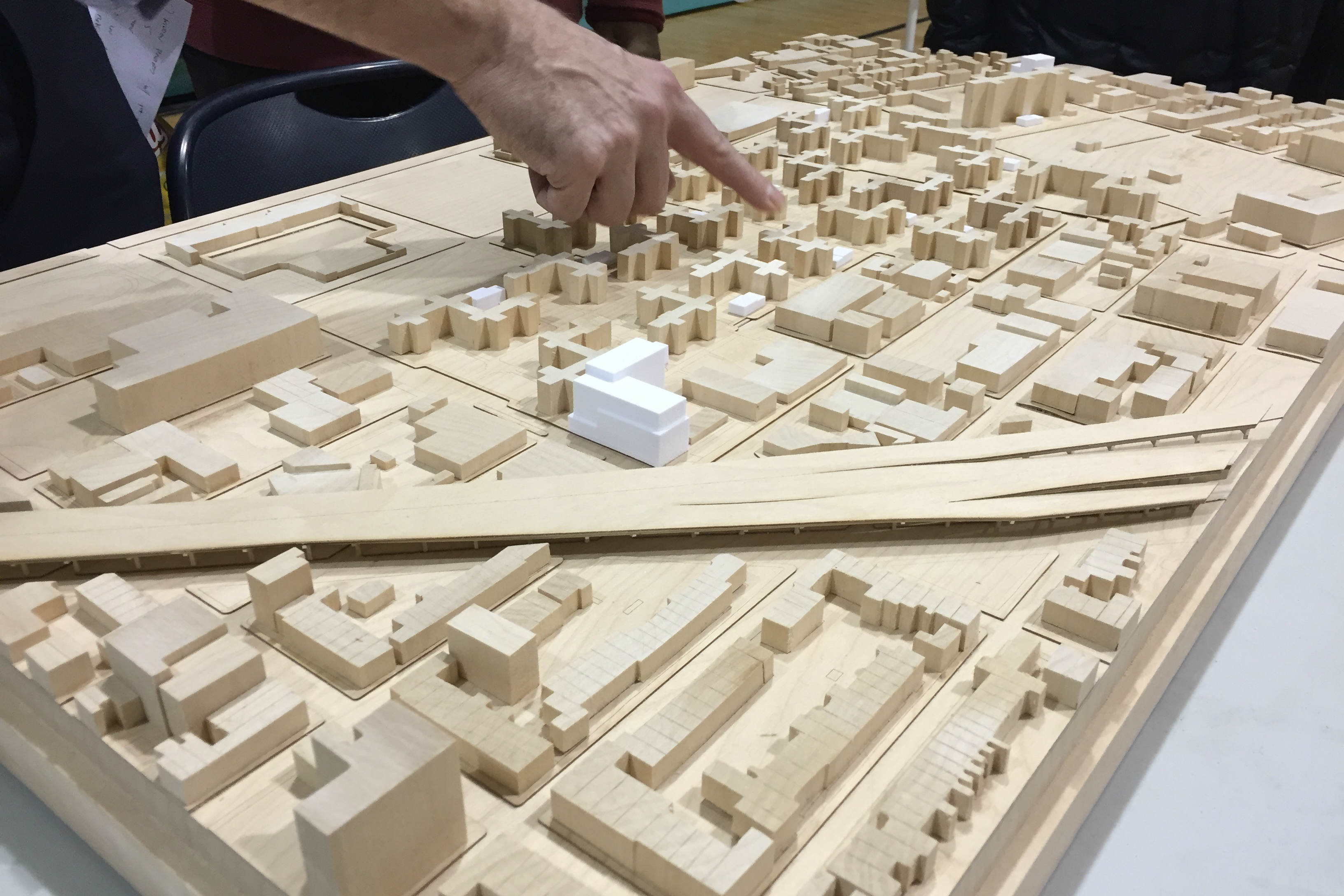 The possibility of moving stores and homes was a point of contention for local leaders.

“The people need these stores on Clinton Street. Where are they going to shop?" she added.

The plan is still in its early stage and will be reworked to incorporate community feedback received Monday night, said Michael Rosen, the executive vice-president for Disaster Recovery at NYCHA.

During the presentation, Lerner discussed three goals for the project — to restore and repair the buildings, protect residents from future storms and enhance the public housing campus in a way that's "safe, clean and connected."

To protect buildings from flooding, the firm proposed "lily pads," a type of terracing that will elevate the area near the existing residential towers in order to prevent storm water from seeping inside.

An "integrated flood protection system" is also in the works for Red Hook.

The designs will be finalized by the fall and construction is expected to begin at the end of the year, Rosen said.