RED HOOK — With a massive waterfront manufacturing complex and multi-million dollar condo sales, Red Hook may be on its way to becoming one of Brooklyn real estate's hottest neighborhoods.

Several new developments are underway in the neighborhood, including Italian developer Est4te Four's plans for a 1.1 million square-foot office complex and the residential conversion of the New York Dock building at 160 Imlay St. A 200-bed nursing home has also been proposed for the neighborhood.

"Before there was a much smaller pool of people that were interested in living in Red Hook," she said.  "I feel like there's going to be consistent new projects coming up."

New developments are also popping up on Red Hook's main drag Van Brunt Street, which is already home to Fairway Market, a future ice cream factory from Ample Hills, and a number of popular restaurants and boutique stores.

The median asking rent in the waterfront neighborhood was recorded at $2,722, according to a StreetEasy report released last fall. Median sales prices jumped 15 percent in the Red Hook, Carroll Gardens and Boerum Hill neighborhoods at the end of 2015, according to another report from The Corcoran Group.

While the pace of construction has been fairly gradual, it appeared to pick up speed after Hurricane Sandy hit Red Hook in October 2012.

"There's been a lot new development in Red Hook post-Sandy," said Hagman, who also lives in the neighborhood.

Hurricane Sandy's impact on Red Hook may have also paused some developments that were in the works. It also could have spurred landlords to move forward with projects after new flood regulations that were implemented, she said.

The devastation caused by Sandy is never far from the minds of longtime residents, many of whom are working toward protecting the neighborhood against future storms.

But for newer locals, there's a draw to living in the sleepy waterfront neighborhood, known for its strong community, panoramic views and small-town vibe.

"People are more concentrated on thinking about the quality of life that comes with living in Red Hook," Hagman said.

Here's a look at some of the latest developments planned for the commercial corridor:

This mixed-use development on the same block as neighborhood bar Fort Defiance is scheduled for completion this fall, according to a "Work in Progress" sign outside the site. Permits indicate a "proposed vertical and horizontal enlargement" will be built on the vacant plot. A rendering of the structure shows storefront-like windows at street level. 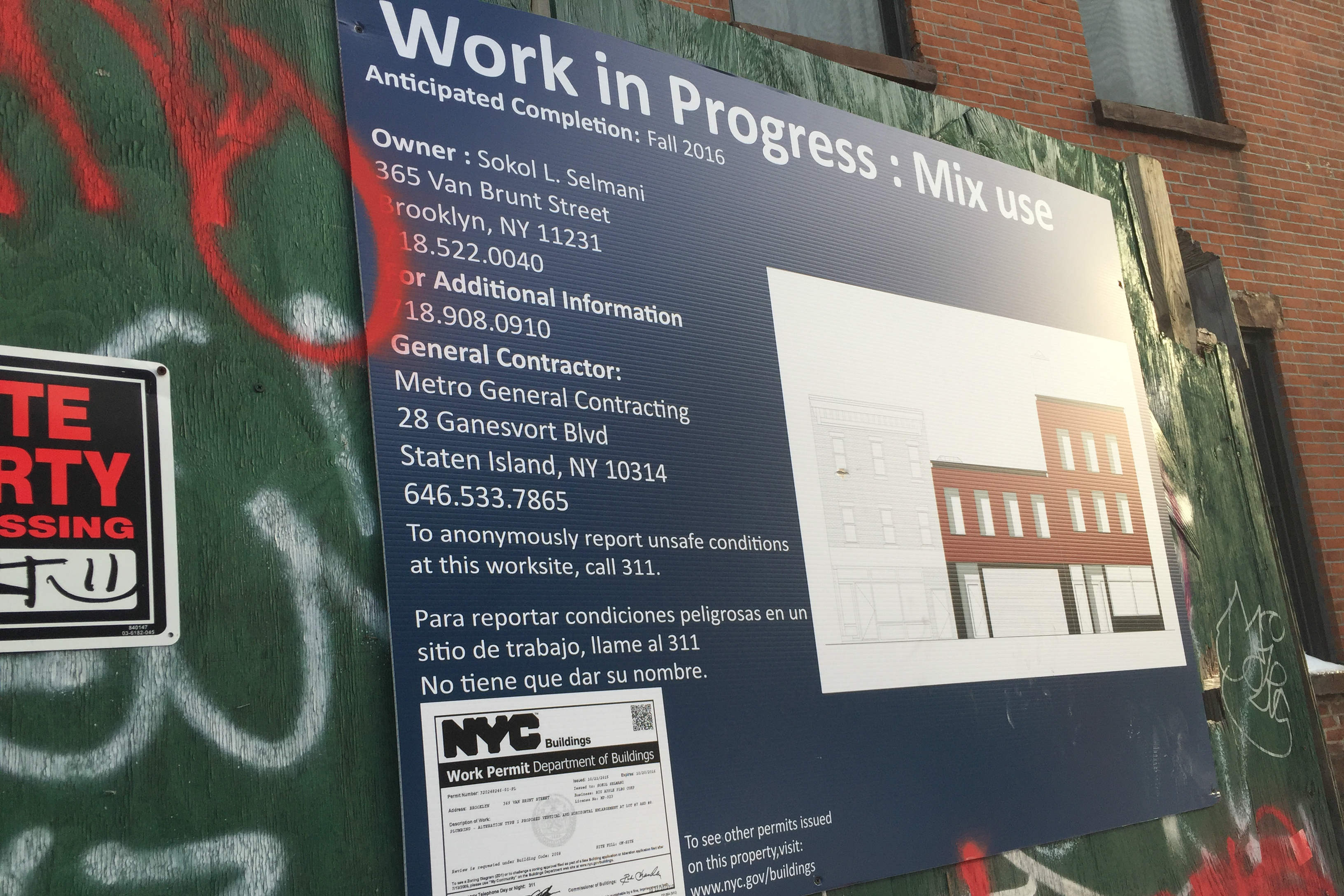 SANBA's 22 townhomes, rising just off Van Brunt Street along King and Sullivan streets, are worth mentioning for the attention to the development in the past year. Designed by AA Studios with five different facades, each townhome will have three stories with a roof deck and rear yard. Last fall, the Real Deal reported that half of the townhouses sold within a week of sales launching for an average of $2.7 million. According to the development's website, only two are still available.

The three-story residential building in the formerly vacant lot will host 19 apartment units for a total of 18,089 square-feet, according to permits. The site's owner is listed as Cheever Development Corporation's CEO and president Matthew Lonuzzi. According to a "Work in Progress" sign, construction will be completed this spring. 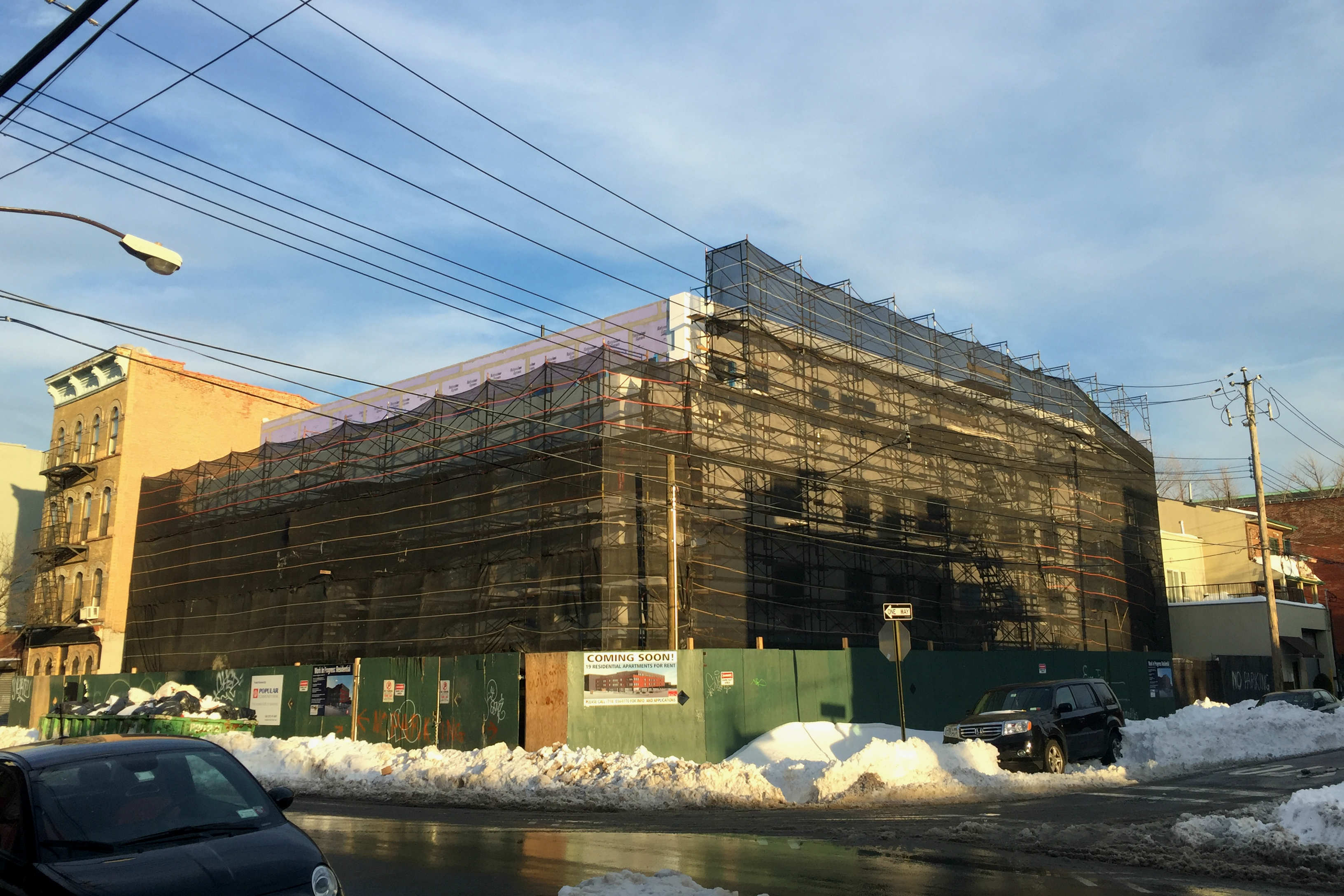 The vacant site owned by VB Equities LLC is being developed as a three-story, two-family building, according to permits. The site has both residential and commercial zoning. The anticipated completion date is December 2016.

In Dec. 2015, YIMBY broke news of permits filed for a 19-room hotel with 3,700 square-feet of medical offices. Since the site is zoned for manufacturing and commercial use, hotels can be built as-of-right, the website reported.