CROWN HEIGHTS — Five miles of new bike lanes and a turn restriction on one of the borough’s most dangerous intersections may soon come to two Crown Heights side streets, according to a new proposal from the Department of Transportation.

In the plan, a new bike lane would be marked along St. Johns Place between Grand Army Plaza and Ralph Avenue and on Sterling Place between Kingston and Vanderbilt avenues on the westbound one-way street.

The proposal would also restrict a left turn from the northbound lane of Utica Avenue onto St. Johns Place, where seven pedestrians have been severely injured in the past five years — an “extremely high” figure, said DOT representative Alicia Posner, who presented the plan to Brooklyn Community Board 8’s transportation committee on Tuesday.

“With our current five years of data, this is actually the third most dangerous, the third highest number of pedestrians severe injuries, for a single intersection in all of Brooklyn,” she said.

In addition to improving safety at the Utica Avenue crossing, the agency hopes the new markings on the side streets will slow drivers down, especially on St. Johns Place where the DOT found 47 percent of drivers regularly speed. 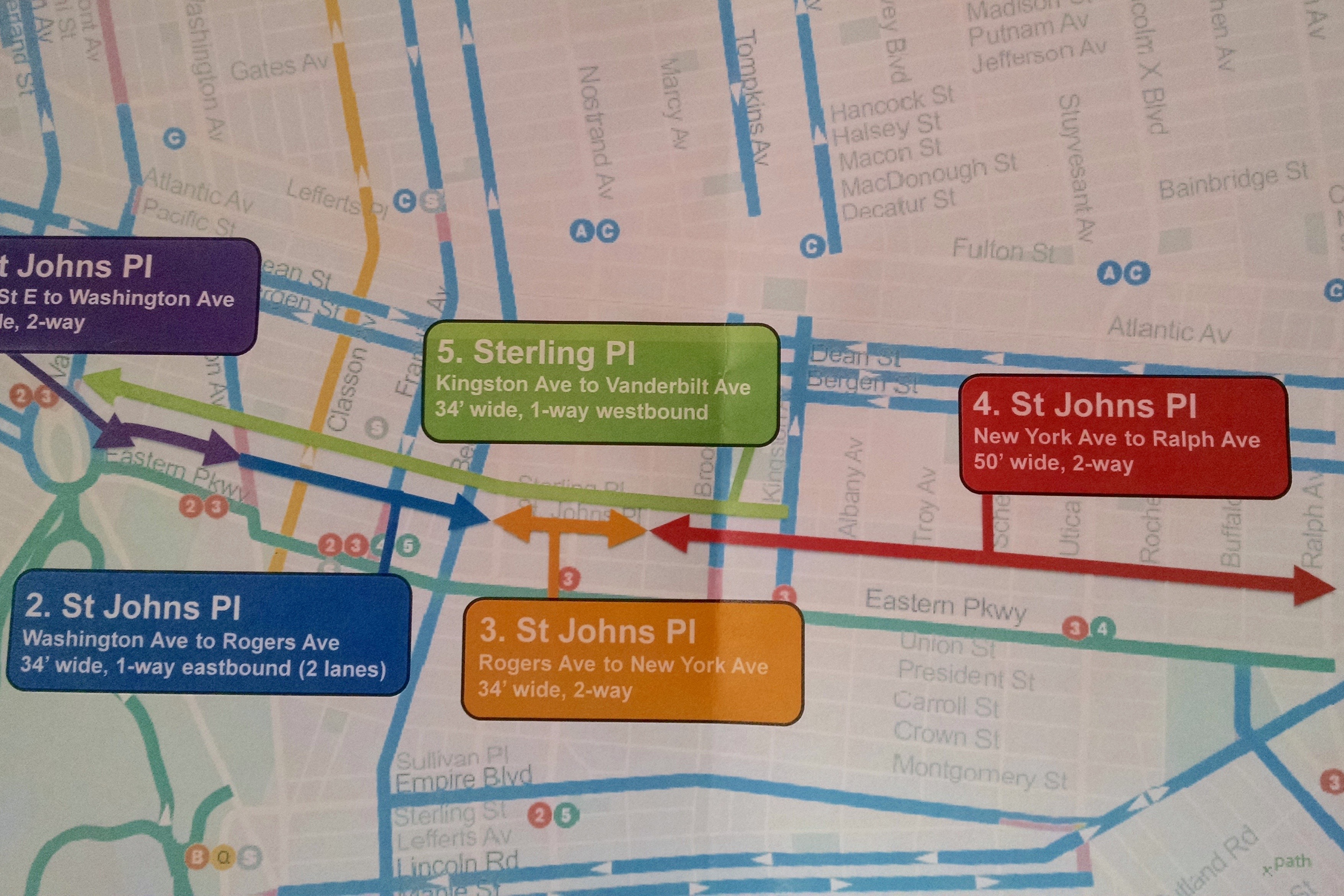 A map provided by the Department of Transportation shows the direction and location of proposed bike lanes in Prospect Heights and Crown Heights, delineated by colored arrows.

In addition, the agency found 680 people have been injured or killed in crashes on both streets in the past five years, including 21-year-old Dave Jones who was killed on St. Johns Place and Nostrand Avenue last March by a teen driver fleeing police.

Though the CB8 committee was scheduled to vote on the proposal after DOT’s presentation on Tuesday, chairman Dr. Fred Monderson postponed consideration of the plan after one St. Johns Place resident vocally opposed the bike lanes and the turn restriction at Utica Avenue.

Giving her name only as Regina, the 20-year resident and self-proclaimed owner of two cars challenged the DOT’s crash data and demanded to know why “every street in Crown Heights” needs a bike lane.

“Where’s your data? Where your statistics?” she asked of Posner about the Utica Avenue intersection. “As long as I’ve been here, I don’t know of seven accidents in five years. Where are we supposed to turn?”

"A lot of people in the community is feeling like this is like the next colonialism," she added, speaking specifically about the bike lanes.

In response to her complaints, Monderson explained that, as the borough's population increases, “we have to commiserate with the DOT” as they try to deal with congestion.

“Motor vehicles are going the way of the dodo bird,” he said.

Posner emphasized that the proposal is the “standard treatment” for a bike lane on a residential side street and does not take away “any capacity” for cars.

“What we’re doing is adding more markings to the street and also delineating the parking lanes, which really creates a safer environment. It visually narrows the area without taking away any vehicle capacity,” she said.

The proposal will be presented again at the transportation committee’s next meeting, Monderson said, scheduled for the fourth Tuesday of the month, Feb. 23 at 7:00 p.m. at 727 Classon Ave.