By Rachel Holliday Smith |&nbspDecember 17, 2015 4:11pm
@rachelholliday
Twitter Facebook Email More
A rendering for a plan to redevelop the Bedford-Union Armory in Crown Heights shows a portion of the building to become 24 townhouse-style condominiums on the President Street side of the 1903 building and a 13-story rental building to be constructed on the armory's east side.
View Full Caption
Bedford Courts LLC

CROWN HEIGHTS — The city officially unveiled a plan Thursday to create new housing and recreation space in a former military armory in Crown Heights, a project which will come under public review next fall, the project’s developer said.

The 515,000-square-foot redevelopment of the Bedford-Union Armory will include 24 private condominiums, a new 13-story rental building with 330 market-rate and affordable units and a 45,000-square-foot recreation center inside the building’s domed drill hall, the city Economic Development Corporation said.

The EDC chose two developers — BFC Partners and Slate Property Group — to jointly redevelop the armory under the name “Bedford Courts LLC.” The group will purchase a portion of the President Street side of the armory outright to be converted into market-rate condominiums, the EDC said; the rest of the property will be developed by Bedford Courts under a long-term lease. 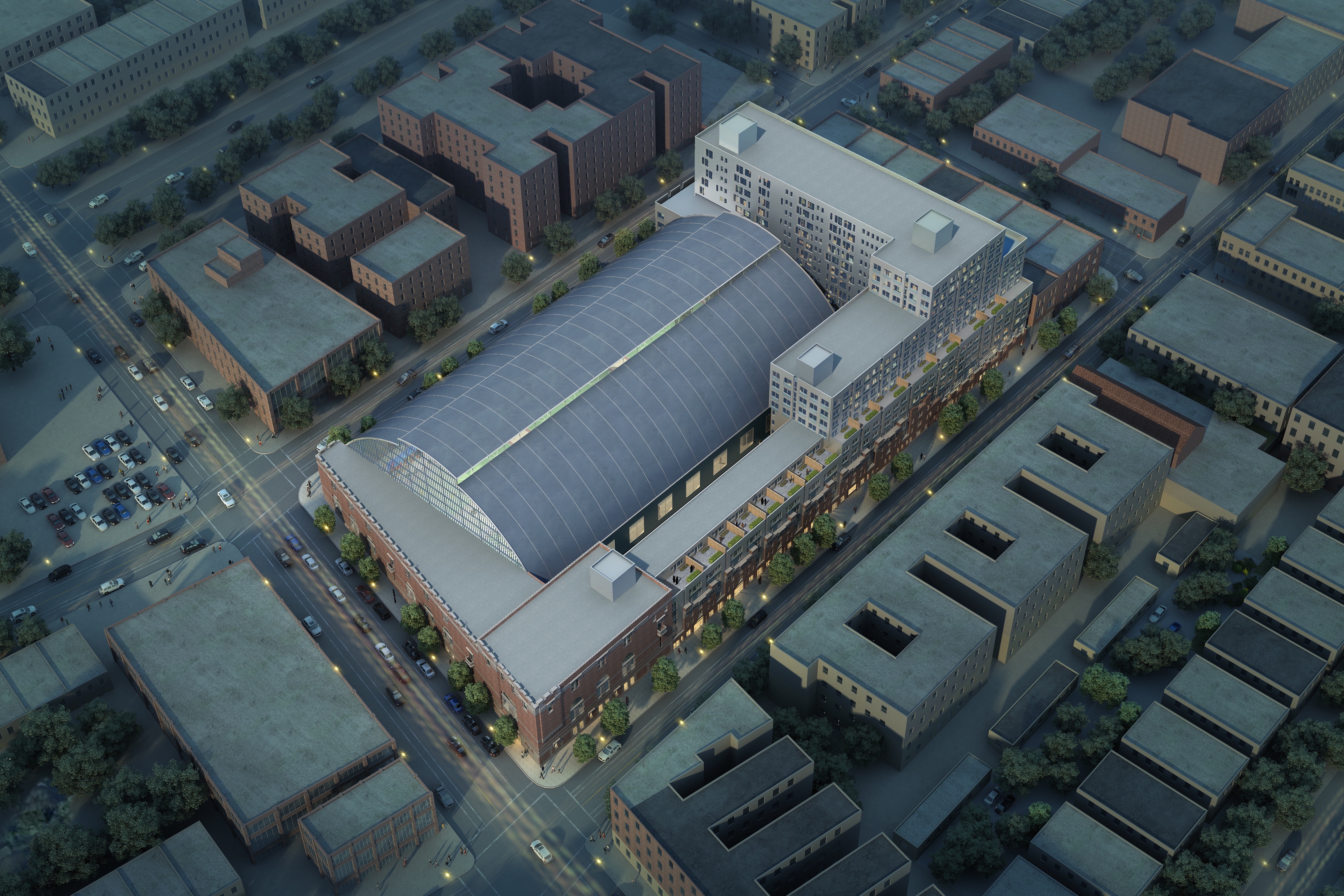 An aerial view of the new armory plan shows a 13-story rental building to be constructed on the property's east side and the domed drill hall to become a recreation center. (Credit: Bedford Courts LLC)

Bedford Courts will also build out the building’s sports center, set to include a swimming pool, indoor turf field and multiple basketball courts, with funding from The Carmelo Anthony Foundation, according to the plan. A 500-seat auditorium, classroom space for nearby Medgar Evers College and community event space are also in the works, the EDC said. 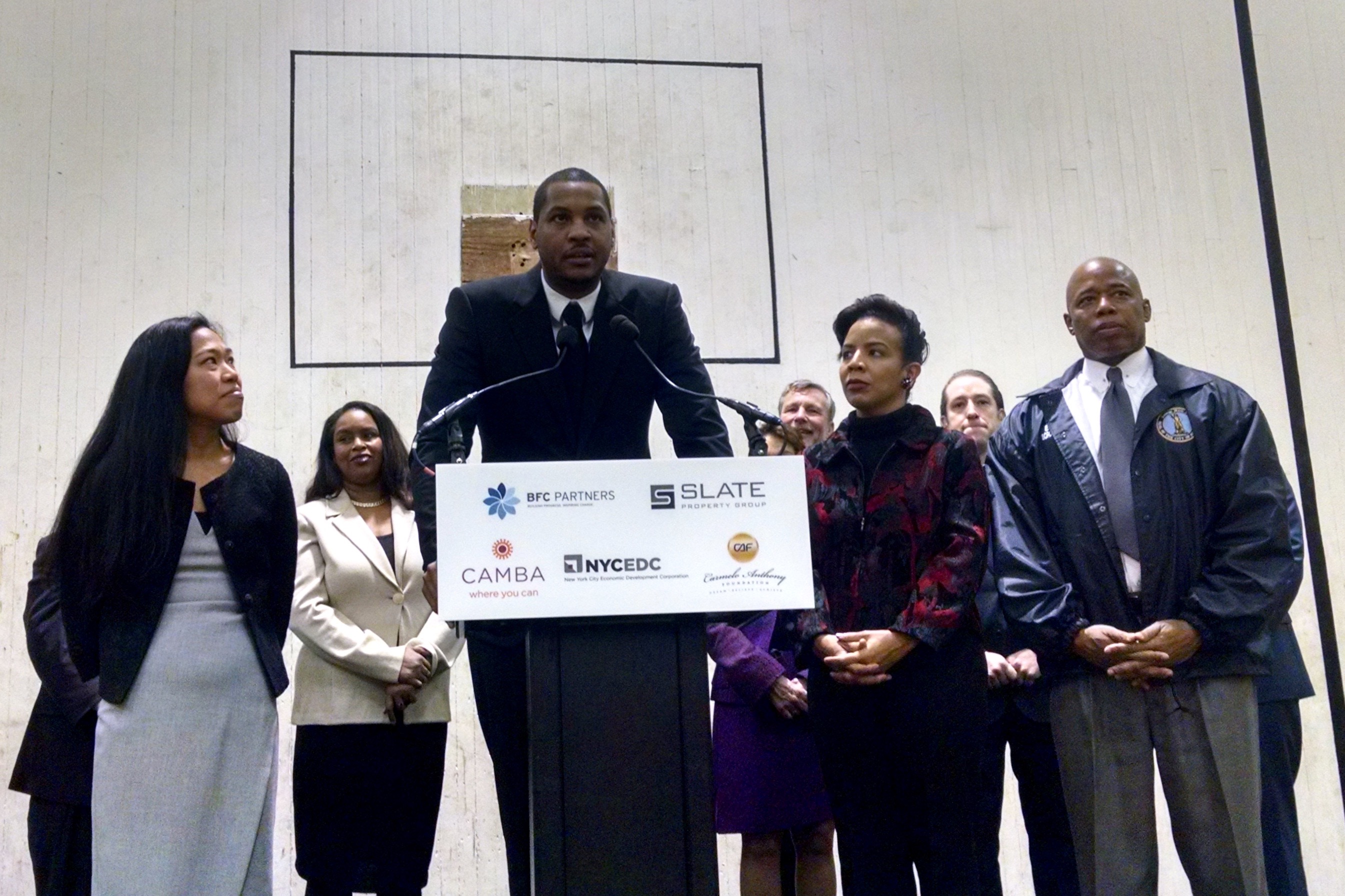 At the development announcement Thursday, Knicks forward Carmelo Anthony announced his foundation would help fund the recreation center to be built inside the Bedford-Union Armory. (Photo credit: DNAinfo/Rachel Holliday Smith)

On the east side of the armory, the developers hope to replace a parking garage with a 13-story, 360,000-square-foot rental building to include half market-rate units and half affordable units for middle- and low-income families.

At Thursday’s announcement, the EDC estimated the project would create approximately 600 temporary construction jobs during the build-out and 200 permanent jobs within the armory.

The plan, which was first reported by DNAinfo New York earlier this week, is two years in the making following a 2013 request for proposals by the EDC and multiple community input meetings held in the area.

But the project may take another year to greenlight, according to representatives of Bedford Courts, who said they hope to submit the plan for the Uniform Land Use Review Procedure (ULURP) by next September. That procedure for approving the use of public land takes at least six months to complete.

Local elected officials at Thursday’s announcement were careful to remind the Crown Heights community that the plan is still in flux.

“The negotiation period for this project is now just beginning,” said Councilwoman Laurie Cumbo, while praising the plan that will “create an opportunity for hundreds of families to be able to have a safe place to live.”

“We still have a long way to go,” he said, urging his colleagues and the armory's developers to listen to residents’ concerns about the project “with a compassionate ear.”

“During a time of all this massive improvement in Brooklyn, we have seen displacement,” he said. “We think this is an opportunity for how we can look at development going forward — how we can involve the community in development — so it doesn’t need to be such a fight between developers and the community.”

“We’re expecting to continue to engage the community on a regular basis to ensure that, at the end of the day, this project is responsive to the needs of this community,” said Donald Capoccia of BFC Partners.

On the day of the announcement, the plan was already getting some push-back in the form of a letter from the "Community Armory Committee" circulated at the press conference demanding “the armory must not be sold.”

At the event, Evelyn Tully Costa, a neighbor of the armory, designer and local activist, said she considers the renderings of the building “uninspirational” and worries that selling off the President Street side of the armory will strip the building of revenue-generating space.

Speaking for herself and like-minded neighbors, she urged a "reconfiguration."

“We’d rather wait to get it right than have this particular plan go through, which we basically think is a plan for failure,” she said.

The Bedford-Union Armory was used by the military from its opening in 1903 through 2011. Except for occasional events held there, the building has stood vacant since the military left. The city acquired the property in 2013.