Did you know the Tootsie Roll was invented in New York City? Or that the perennial subject of hipster mockery, brunch, was first served here in 1931?

These are just two of the thousands of factoids jammed into "Savoring Gotham: A Food Lover's Companion New York City," an encyclopedia published by Oxford University Press last Wednesday.

The objective of the project is to provide context easily overlooked when the media writes about the latest red-hot restaurant or chef, said the book's editor, Andrew F. Smith.

Smith, an assistant professor at the New School who moved to New York in 1977, became interested in the city's culinary life in 1991, when he learned that one of its few remaining automats was closing.

"Once a thriving chain of restaurants emblematic of New York City's hustle and bustle, the automats were distinguished by their unique mechanical food dispensers," Smith writes in his introduction to "Savoring Gotham." "I was surprised that they should disappear with so little fanfare ... As it turned out, the end of the automat was just one small facet in the city's ever-changing culinary kaleidoscope."

Smith would ultimately enlist 174 encyclopedia contributors to capture that kaleidoscope — its personalities, its restaurants, brands and cuisines across all five boroughs for a total of 570 entries, each capped at 1,500 words, and 774 pages.

Here's what we learned from just eight of its entries:

The invention of this classic Halloween candy is attributed to a New York City confectioner who worked for the food manufacturer Stern & Saalberg. Leo Hirschfeld, a German immigrant who landed in Brooklyn in 1888, invented a number of candy-making machines for Stern & Saalberg on his way up the corporate ladder. In 1908, the company introduced a Hirschfeld creation to the market that would become a national favorite: a log-shaped chocolate caramel that, unlike other penny candies, came in its own wrapper. It was likely named after the inventor's daughter Clara, nicknamed "Tootsie."

Should we say pizza as the world knows it was invented in New York City, not Naples? The kind of pizza that's served around the globe, a large round pie topped with tomato sauce and mozzarella chese and sliced into triangles, did originate in New York, at 53 1/2 Spring Street. The Neopolitan immigrant Genarro Lombardi opened up a grocery and provisions shop at that address in 1897, successfully applying for a license to operate the city's first pizzeria in 1905. As time passed, Lombardi's pizzas — which initially look their cue from the small baked goods that street vendors sold in Naples — grew in size and their toppings multiplied, begetting the American term "pizza pie."

Sure, these days most people rely on Yelp ratings when they're choosing a place for dinner, but if you live in the city, you've probably seen at least one restaurant post its Zagat ratings for food, décor and service near the front door. Those ratings are the creation of Tim and Nina Zagat, two married corporate lawyers who discovered the joys of French cuisine and the Guide Michelin — which evaluates eateries on a 1 to 3 scale — while working in Paris for two years. They distributed the first Zagat survey of 75 American restaurants among their friends in 1979, and printed the first edition of the questionnaire's results in 1983.

Brunch arrived on the city's culinary scene in the early 1930s, when the dining room at the Hotel Lombardy on East 56th Street started serving it. The price for the hotel's brunch buffet from noon to 4 p.m. on Sundays was $1.25, a paltry sum that also covered an alcoholic beverage and entertainment. 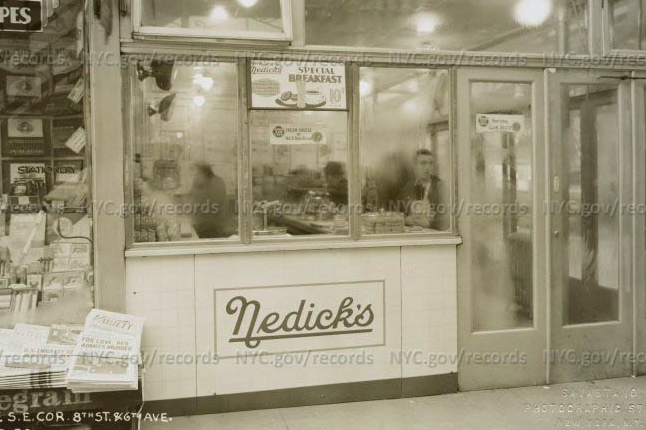 Before there was Dunkin' Donuts, before there was McDonald's, there was Nedick's, New York City's original affordable fast-food chain on every street corner. Taking its name from the first syllables of its owners' — Robert Neely and Orville Dickinson — last names, Nedick's served 10-cent orange drink, coffee, donuts and hot dogs when it launched in 1913. The chain flourished in the 1920s and '40s, but it couldn't compete with Dunkin' or McDonald's, folding in the 1980s. 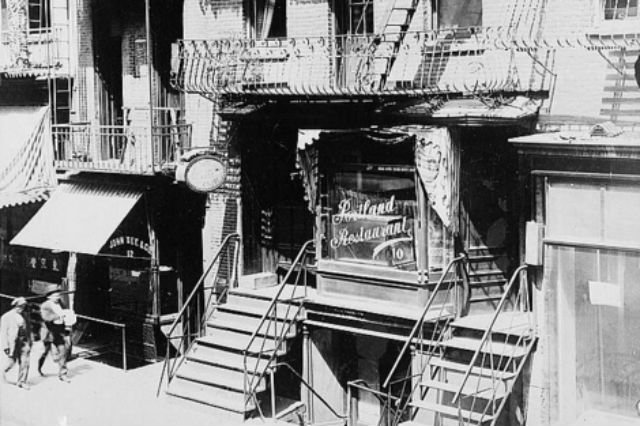 A chop suey joint in Chinatown (Credit: Library of Congress)

Chop suey joints are mostly a thing of the past, but in the early 20th century, the city was home to more than 100 restaurants operated by Chinese restauranteurs outside Chinatown. Chop suey joints served Chinese-American dishes like chop suey, a stir-fry of meat and vegetables cooked in a mildly sweet sauce, as well as American dishes like ham sandwiches and tomato soup. Unlike most restaurants, they didn't discriminate against black and Jewish diners, many of whome became devoted patrons.

New Yorkers had eaten cheesecake since colonial times, but it wasn't until the 20th century that the kind of cheesecake Mayor Bill de Blasio sent Kansas City mayor Sly James upon losing their World Series bet appeared in the city's bakeries and restaurants. It was made not with ricotta, cottage cheese or farmer's cheese, but with cream cheese, a new product on the market at the time. Taking the credit for its invention was Arnold Reuben, the owner of the Turf Restaurant at 49th Street and Broadway. Reuben would later complain that the recipe he claimed to have created around 1928 was stolen by other restauranteurs such as Leo Lindemann, whose Times Square eatery, Lindy's, would become famous for its creamy cheesecake flavored with citrus zest.

You may have seen the Snapple ads hawking the drink as "born in New York," and that's in fact the case. The company was founded by three New York men: Leonard Marsh, his brother-in-law Hyman Golden and childhood friend Arnold Greenberg. In 1972, each contributed $6,000 to launch a company that would sell organic fruit drinks to health food stores. It started calling itself Snapple in 1980, after the name of a carbonated apple juices it sold. Snapple's biggest success came in 1987, when it introduced a line of bottled iced teas that were made without preservatives and brewed and bottled hot, unlike most iced teas at the time.