By Rachel Holliday Smith |&nbspNovember 10, 2015 6:14pm
@rachelholliday
Twitter Facebook Email More
This diagonal section of Franklin Avenue south of Empire Boulevard may be closed and replaced by a pedestrian plaza according to a new safety proposal by the city Department of Transportation.
View Full Caption
DNAinfo/Rachel Holliday Smith

CROWN HEIGHTS — Two new pedestrian plazas are set to replace two sections of road adjacent to Empire Boulevard in 2017, according to a proposal from the Department of Transportation.

The plazas are part of a pedestrian safety initiative by the DOT to improve Empire Boulevard, which the agency says is in the top 10 percent of most dangerous streets in Brooklyn.

At the intersection of Franklin Avenue and further east, at the four-way crossing of Remsen, East New York and Utica avenues, the boulevard saw 490 injuries from 2009 to 2013, including 29 serious injuries or deaths, the DOT said.

To improve conditions, the agency wants add curb extensions along Empire and close two small sections of roadway — Franklin Avenue from Sterling Street to Empire Boulevard and at Remsen Avenue one block south of East New York Avenue — to make way for protected plazas built for pedestrians and planted with trees, according to the proposal. 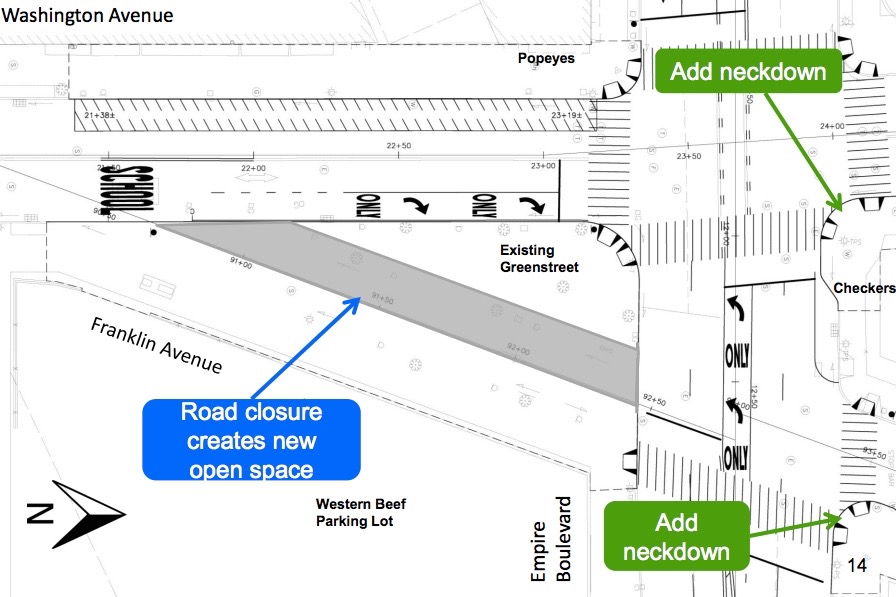 A new safety plan from the DOT would close a small section of Franklin Avenue and add curb extensions on Empire Boulevard. (Photo credit: NYC DOT)

The idea received a green light from local Brooklyn Community Board 9’s transportation committee last month, but hit a roadblock at CB9’s full board meeting Oct. 27. There, many residents and meeting attendees loudly voiced concerns that the plan, especially changes to Franklin Avenue that they say could make traffic conditions worse.

“Have you guys come around during the rush hour to see the traffic?” asked Dr. Zorina Frederick, a CB9 member and owner of a local driving school, of the DOT representative at the October meeting.

“I don’t think you all really did a constructive study to realize that you’re making it even more difficult,” she said to loud applause. “We have cars and we would like to be able to drive on the street.”

Another resident who lives on Sterling Street a block away from the proposed Franklin Avenue plaza said she’s worried the plan will reduce parking spots on her block.

“It’s our community and I think we should be asked if we want this,” she said as her neighbors cheered.

In response, the CB9 transportation committee co-chair, Tim Thomas, reminded those against the plan to consider those who have been seriously injured at the intersections when considering the proposal.

“This is about safety. There are walkers, bicyclists getting killed at these locations. From now on, please keep it in mind when you talk about your cars,” he said.

The full board tabled further discussion of the plan; the CB9 transportation committee will reconsider the proposal at a meeting set for Nov. 18 at 890 Nostrand Ave.

Here's Why a Fight Is Brewing Over 30,000 Affordable Co-ops in NYC

'The Get Down' Ripped Off My Club, Disco Fever, Hip-Hop Pioneer Says