Looking for a spooky thrill this Halloween?

You could take a tour of Brooklyn's Greenwood Cemetery to visit the graves of spiritualists, gangsters and revolutionaries.

But you don't actually have to tread hallowed ground to seek the eerie, lingering presence of the dead.

"A lot of the spookiest cemeteries in New York are not officially cemeteries any more," said Andrea Janes, founder of a "macabre" walking tour company called Boroughs of the Dead. "Mostly, they’re parks now.”

That's especially the case in Manhattan, where cemeteries outgrew church courtyards and where the city ruled out any more burials below 86th Street in 1851. When Manhattan congregations relocated to the outer boroughs, the deeds to the land they left behind often stipulated the properties be used as a cemetery for all time, said anthropologist Mary French, author of the New York City Cemetery Project.

"But you can’t stand in the way of progress, so a lot of those things went by-the-by when the land was sold," French said.

Land that had housed the dead in cemeteries and potters' fields — burial grounds for criminals, epidemic victims and the penniless dead — became home to the living as the sites of parks, hotels, supermarkets and dim sum restaurants.

But arrangements to empty the plots of decomposing corpses below the surface weren't always comprehensive, Janes said.

"In a lot of instances, [cemeteries] were not really properly emptied out."

In the earth below, the dead may still be lurking.

Take a tour of some of the city's former cemeteries, guided in part by French and Janes, below. 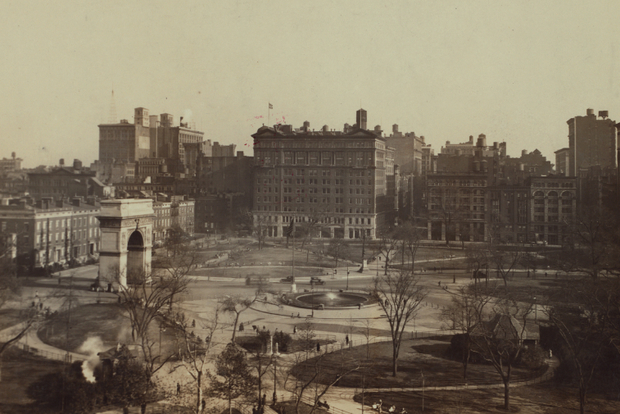 Take a walk through Washington Square Park at noon, and you're bound to see office workers eating their lunches while street performers earn their wages.

Little do they know that archaelogists regularly find human remains in the ground beneath them.

The eastern two-thirds of the park were purchased by New York City in 1797 to create a potter’s field next to several established church cemeteries. To make everything creepier, the city sheriff soon built a public gallows near the current location of the park's fountain. It's estimated that more than 20,000 people found their final resting place in what is now the square. The majority, never disinterred, still lie under the park's grass and pavement. 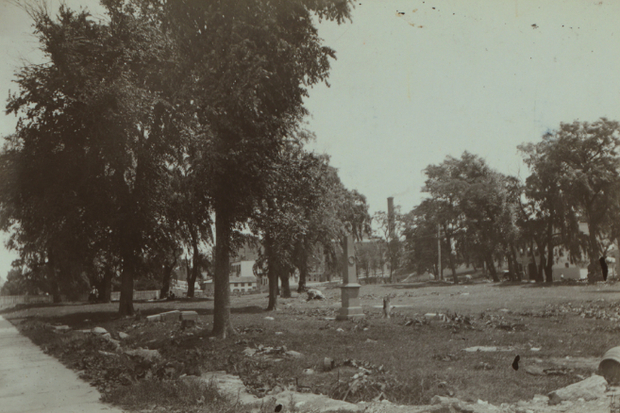 If the city hadn't intervened, New Yorkers might have continued dumping trash at the plot of land in Mott Haven that once served as the public burial ground for the town of Morrisania. (Who can say what the ghosts of those buried there might have done then!)

The cemetery was established near the intersection of 149th Street and St. Ann's Avenue in 1853, when Morrisania still belonged to Westchester County. (New York City would annex the area in 1874).

About 150 members of the Sons of Liberty, the secret society formed by colonists fighting the British during the Revolutionary War, were buried in Bensonia Cemetery before it was closed to burials in 1868. As more and more bodies were relocated, the abandoned property became a dumping ground for garbage. In 1903, New York City passed a resolution to convert the land into St. Mary's Park. 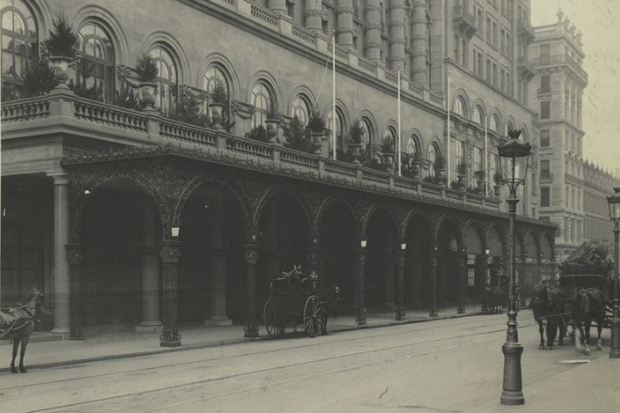 In the early 18th century, the area that would soon be called Park Avenue — a name synonymous with America's wealth — was home to a potter's field. And that burial ground, shabbily maintained, bordered what was then the campus of Columbia University.

"'Potter's field' is within a stone's throw," noted the Evening Post in 1875, "and we are sorry to say the ends of rows of coffins, filled with the bones of the unknown dead, are still to be seen protruding from the bank of earth lefting by the cutting through of the Fourth Avenue."

In the late 1850s, the city began relocating those coffins to Ward's Island. The current Waldorf-Astoria hotel was erected on the site of the former burial plot in 1931. If you encounter spirits in the hotel hallway, don't say we didn't warn you. 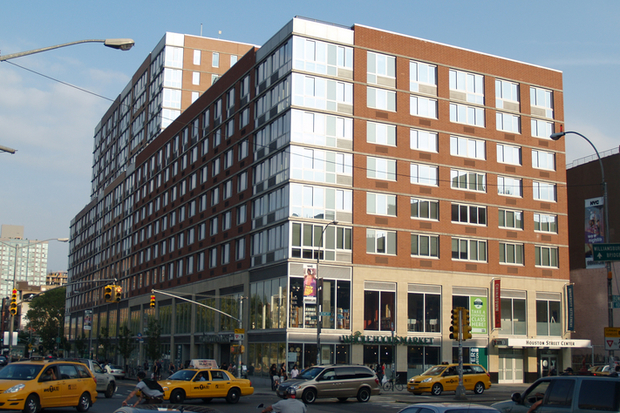 This might add some flavor to your favorite salad bar: the site of Nolita's Whole Foods was, in the early 18th century the principal cemetery for Quakers in New York City. Opposed to conspicuous headstones, the Quakers buried their dead in the cemetery without markings on any of their graves. Records were kept in a book, which was lost. When the bodies were moved to a private cemetery in Prospect Park, it was discovered that the same ground had been used over and over again, in some cases with three or four corpses stacked on top of one another. Families were alarmed to learn to find they couldn't distinguish the bodies of their loved ones from their neighbors. 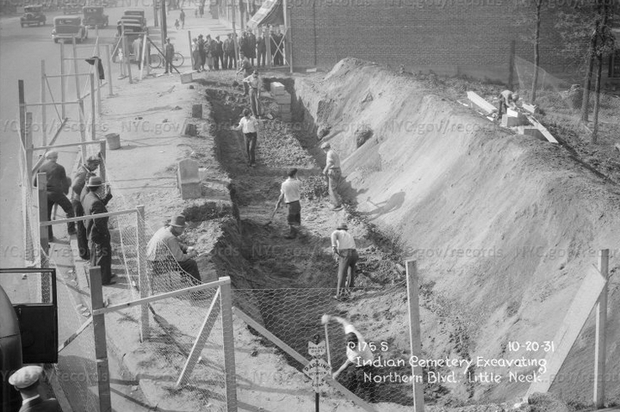 It's a clash of cultures: where there once lay a Native American cemetery in Little Neck, Queens, there now stands a Cantonese dim sum restaurant.

The city removed the cemetery's remains in 1931 to widen Northern Boulevard between Douglaston Parkway and the Queens-Nassau county border and to ultimately make way for businesses such as Northern Manor.

The cemetery had belonged to the Waters family, descendants of the Matinecock, Shinnecock and Montauk tribes. James Water, or Chief Wild Pigeon as he was known among the local Indian community, fought the graves' removal. He managed to delay it for several years, but eventually the city went ahead and dug up about 30 bodies, burying them in the cemetery of the Zion Episcopal Church in Douglaston. 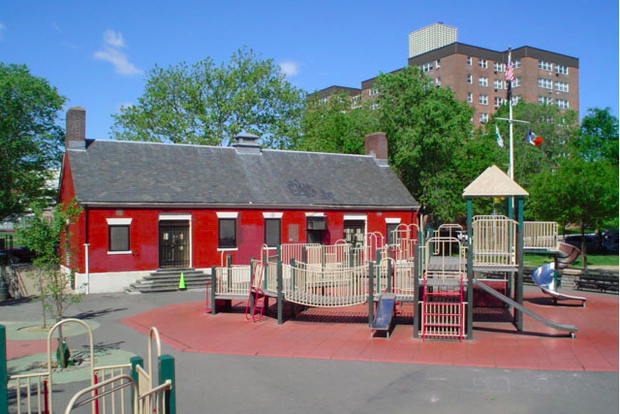 If you're superstitious, you might not want to bring your kids here. As early as 1730, the site of Newtown Playground was used as a cemetery and later as a potter’s field, where inhabitants of one of the oldest European settlements in Queens were laid to rest.

The city of New York acquired the land in 1898, along with the rest of Newtown, and transferred it to the Parks Department in 1917. Many of the bodies were moved to family plots or Hart Island, but a 1927 Queens annual report suggested that some remained, reporting that "[a]ll the old headstones, which stuck up like eyesores, were laid flat and covered with soil" before the park was developed into a playground in 1934. 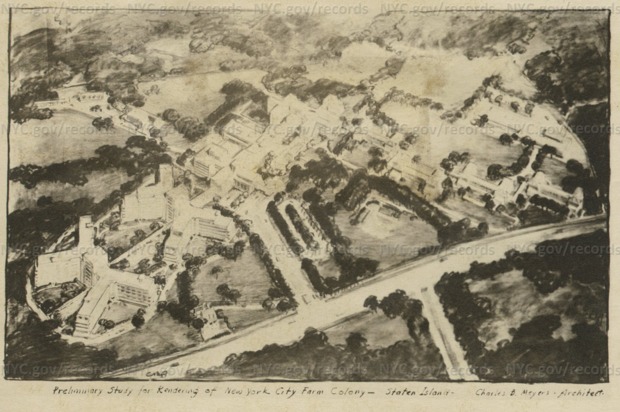 At the northeastern corner of the Staten Island Greenbelt, there once stood the New York City Farm Colony, an asylum for orphans and the elderly, later replaced by a convalescent home for tuberculosis patients. Most of the tombstones in the cemetery adjacent to that structure are gone today, but the bodies, numbering in the hundreds, are still there.