ELMHURST — A few miles from where Pope Francis will say mass to thousands of people this week, a small school is preparing young men to work towards the future of the Catholic church as the only day seminary left for high school students in the country.

Cathedral Preparatory School and Seminary opened in 1914 in Clinton Hill, Brooklyn, expanding to a second building on 92nd Street in Elmhurst in 1963.

In 1985 the school merged into the Queens building, and while other schools like them across the country have closed, Cathedral continues to challenge their 140 students to be “men for greatness.”

They're the only diocesan day seminary for high school students, and it’s a testament to the dedication from the Diocese of Brooklyn, the school’s rector, Fr. Joseph Fonti, said.

“To still keep a school like this going is to give credible witness that fostering vocations to the family of the church and to the individual family is a priority,” he said.

Fonti graduated from the school in 1984, and says it’s still a supportive place for young men considering the priesthood.

Its significance grows amid a crossroads for the Catholic church, as the number of men deciding to join the priesthood declines every year.

When the Elmhurst building opened in 1963, there were approximately 35,925 Diocesan priests in the country, according to statistics from The Center for Applied Research in the Apostolate (CARA) out of Georgetown University.

Pope Francis has urged the young to become shepherds for the faith — encouraging them to leave their old lives and help strengthen the church.

“Dear young friends, never be afraid to go out from yourselves and begin the journey!,” he said at this year’s mass on World Day of Prayer for Vocations.

“The Gospel is the message which brings freedom to our lives; it transforms them and makes them all the more beautiful.”

Encouraging the path towards the priesthood is central to Cathedral, but it’s not their only goal, Fonti said. 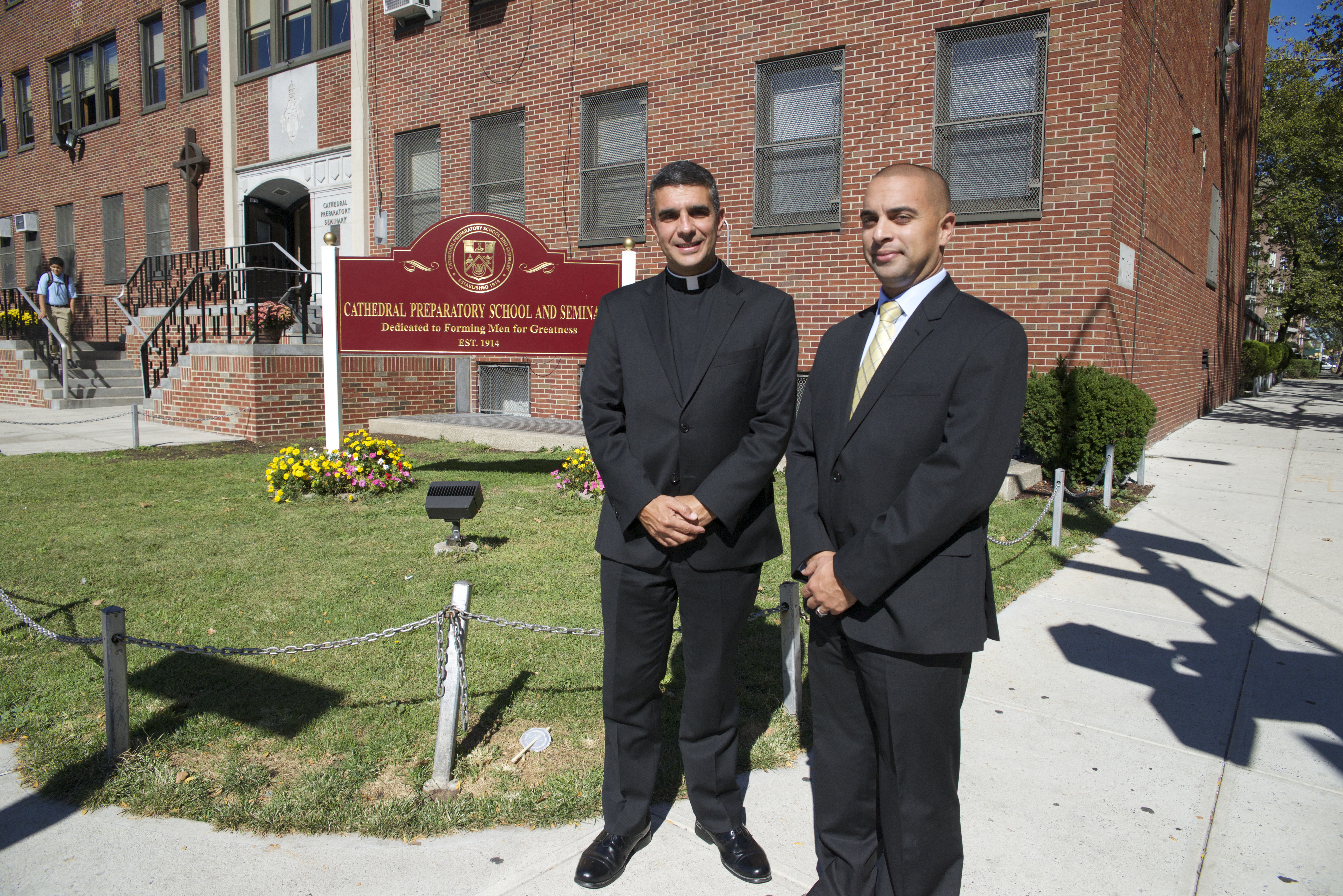 He set out to become a priest as a freshman entering the school, and continued with his plan. By contrast the school’s principal, Richard Diaz, is another alum who decided he wanted to be a priest in middle school. He attended the school with that intent, but changed his mind.

“One of the things Cathedral does best is create an environment that fosters a healthy conversation of both that desire to be a priest and the reality of all the rest of the stuff — however way you want to define the word ‘stuff,’” Diaz said.

“It’s an environment where you’re comfortable to have both sides of the conversation.”

Patrice Legoute, 15, knew he wanted to be a priest from early on growing up in Queens Village.

For a fourth grade essay on what he wanted to be when he grew up, he was the only one who declared he wanted to be a priest. He chose Cathedral so he could continue thinking it through. 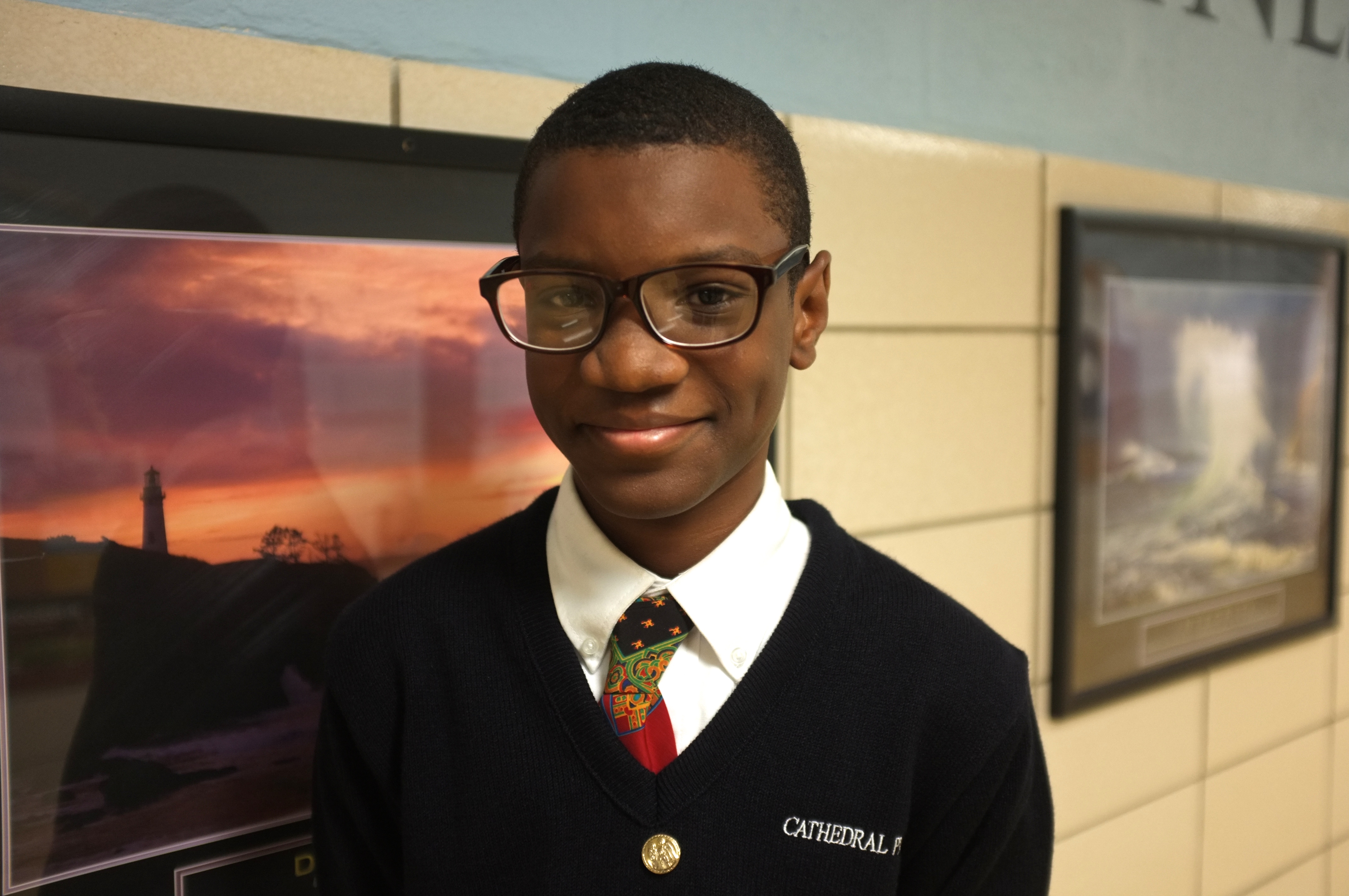 Patrick Legoute says he can't think of anything else he enjoys more than the idea of being a priest, serving his church and connecting people with God. "Is there really anything else I enjoy more than seeing the priest helping out the people in the church?," he's wondered. (DNAinfo/Katie Honan)

“I feel drawn to the priesthood,” said Legoute, a junior. “I think what God’s calling me to do is help his people, bring Him to his people.”

When he thinks about what else he could do, he said there’s nothing pulling him as strongly as becoming a priest — and it stems from his desire to help people.

Freshman Peter Brancale, 14, grew up in the Neocatechumenal Way, an organization within Catholicism that formed in the 1960s.

“I’ve had a vocation to the priesthood since I was very young,” Brancale said.

He lives with his family inside a former chapel in Bed-Stuy, and plans on attending a full-time seminary after he graduates. 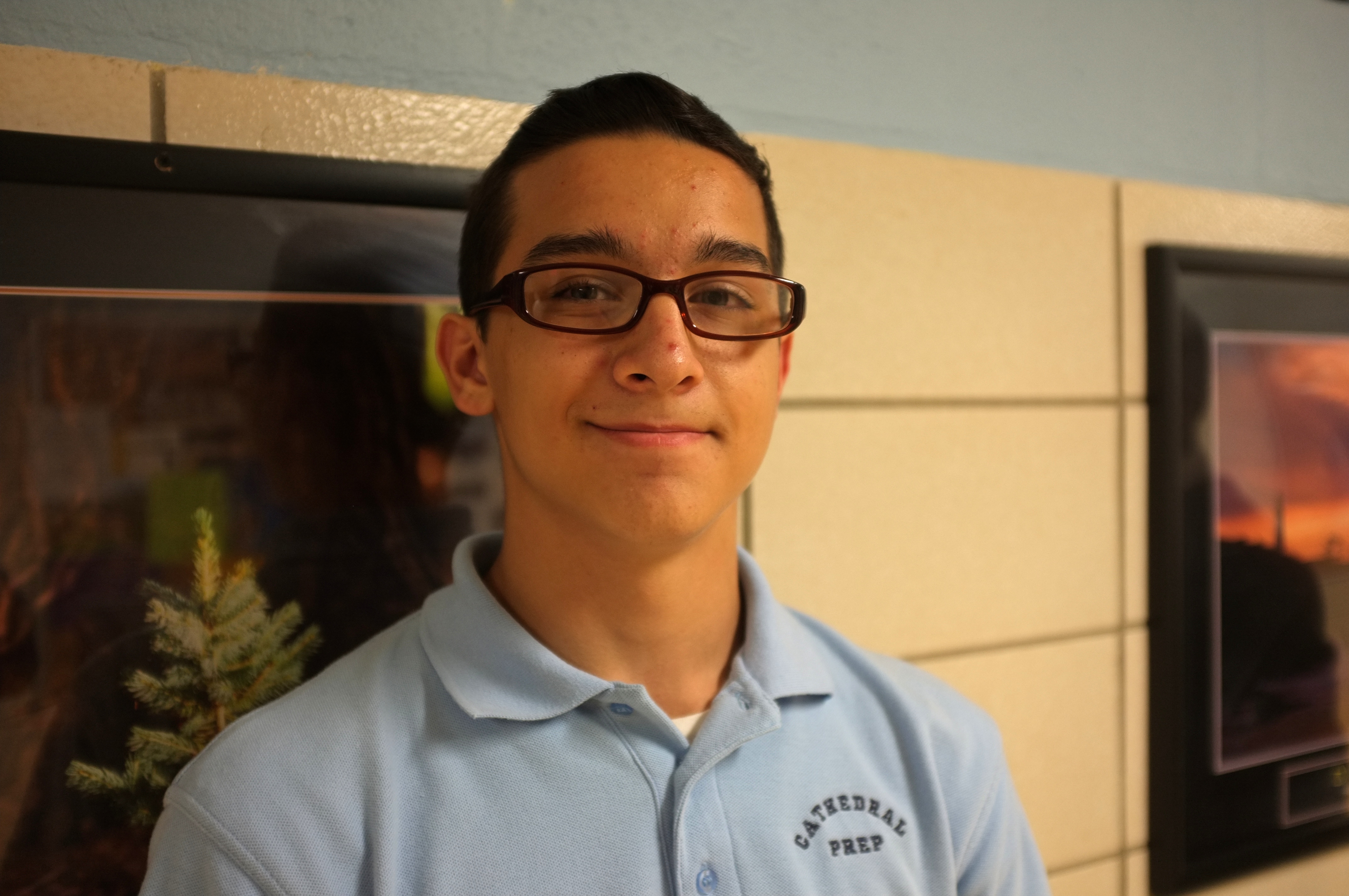 Peter Brancale grew up in a missionary family and said he's wanted to be a priest his whole life. He goes on weekend mission trips with his family. "We go in there and basically pronounce the word of God," he said. (DNAinfo/Katie Honan)

At Cathedral, students must be open to the priesthood, and their school day is centered more around the faith than other Catholic high schools.

Mass is held every morning, confession is held on a regular basis and religion is integrated in most classes.

But students are embraced whether they continue on to a higher seminary or not, officials said.

“We’ve made it very clear in our service to the school... a boy doesn’t have to promise that he’s going to be a priest or that during his time here he’s going to convince us of such,” Fonti said.

“We want him to first and foremost be true and honest, and also to be willing and open to grow intellectually and also spiritually.”

Danny Goncalves, 16, of Astoria, isn’t sure what he’s going to do after he graduates this year.

“I’m still considering the option,” he said, debating between the priesthood and pursuing an engineering degree. “My feelings for the priesthood go on and off, to be honest.” 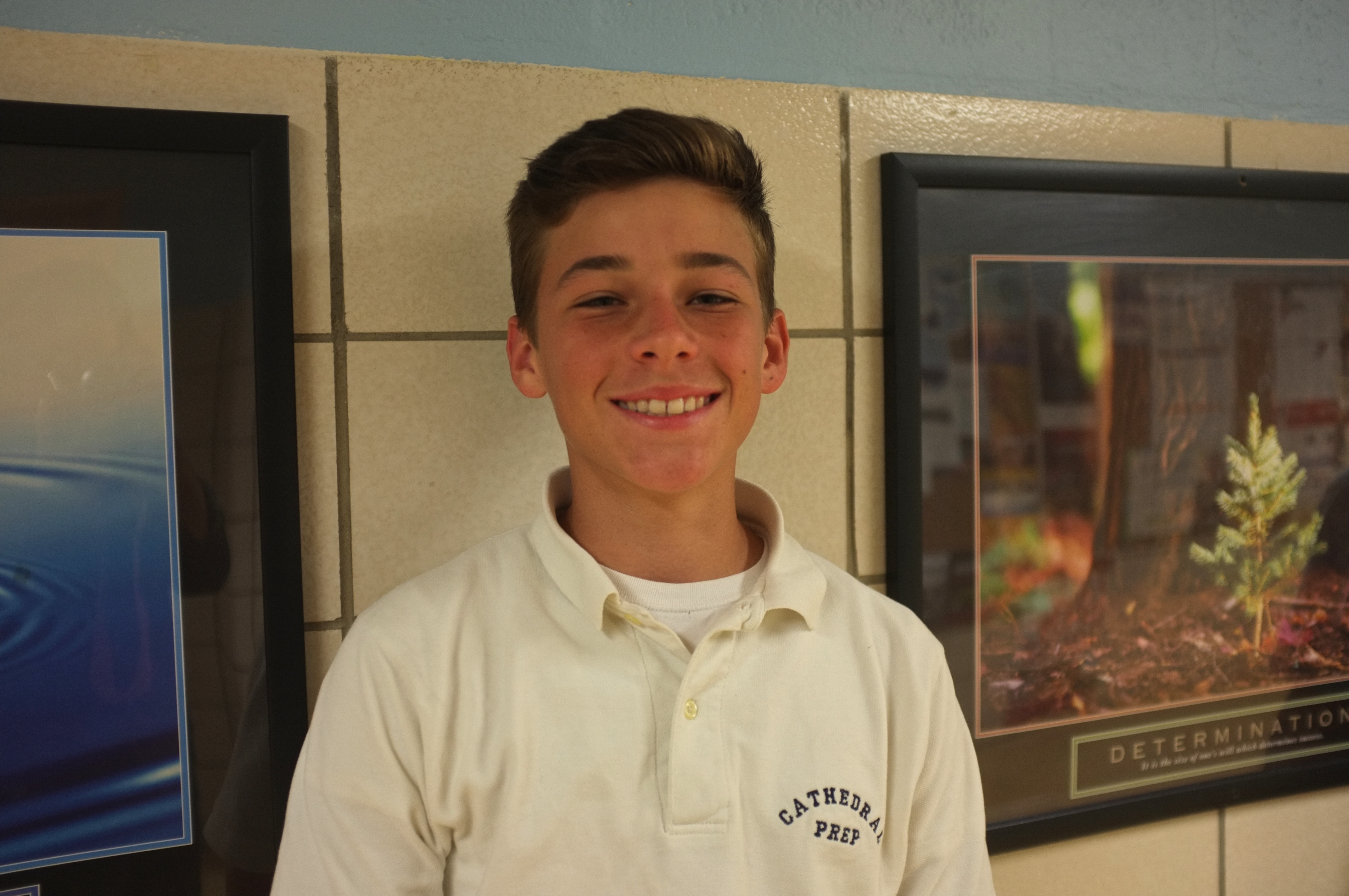 Daniel Goncalves said he's still deciding on whether he will pursue the priesthood and attend a college seminary, a program that would take eight years. He chose Cathedral for its small size and its spirituality. "It's like a brotherhood here," he said. (DNAinfo/Katie Honan)

Students' honesty and questioning is welcomed at Cathedral, which hosts weekly meetings for those discerning the vocation, school staff say.

None of the seniors in the class of 2015 went on to pursue becoming a priest immediately after graduating, and the year before one went on to the seminary.

Yet three of last year's 10 ordained priests in the Diocese of Brooklyn were from the school, Fonti said.

“I admire them,” Fonti said of his classes. “I respect them. They’re small but they’re strong in spirit and commitment.” 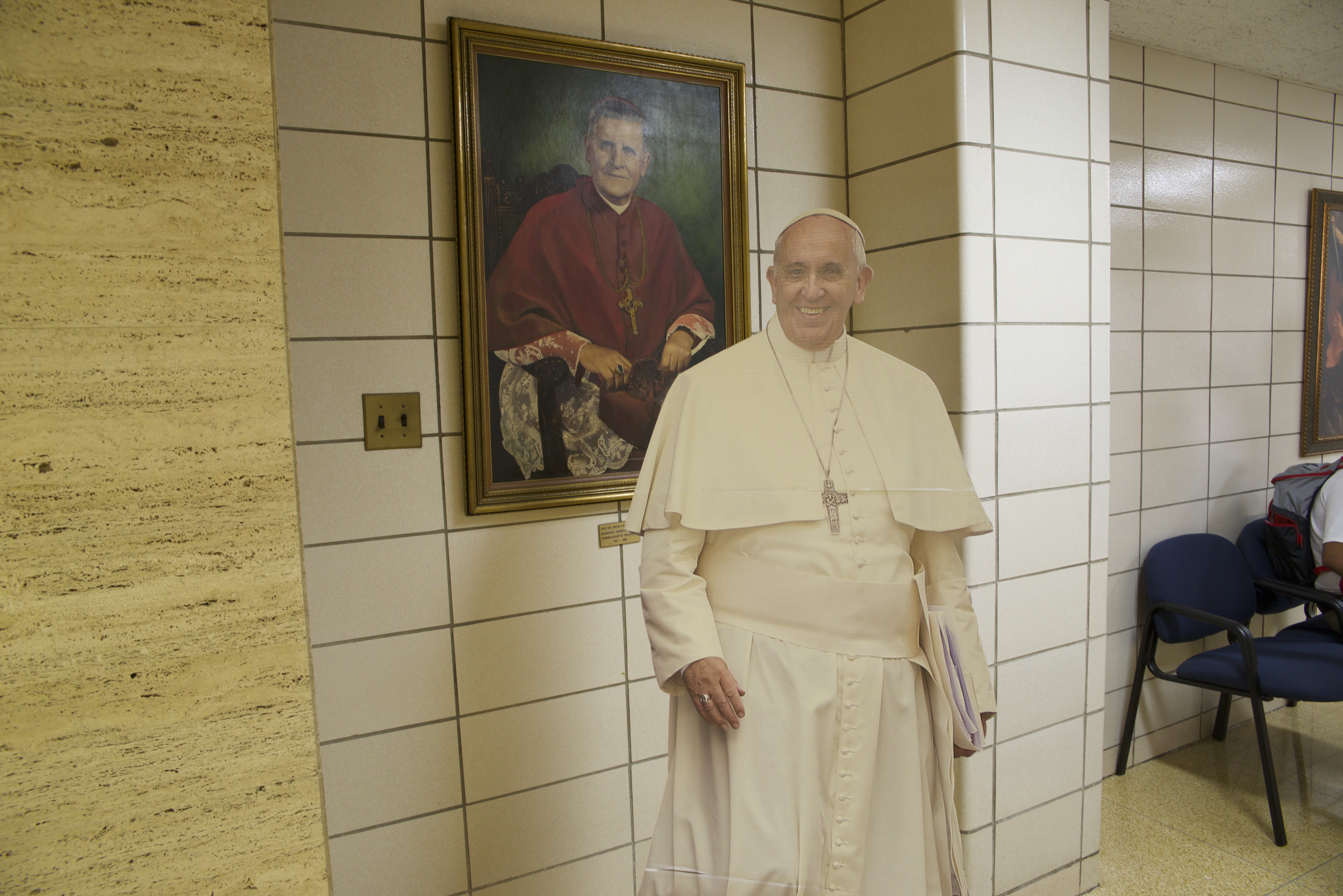 The students at Cathedral prepare for the pope's visit to New York City with a cutout in the school's front hall. (DNAinfo/Katie Honan)

As a unique school, they feel they're helping promote Pope Francis' goal of pushing vocations across the church.

The students called Francis a "wonderful pope" who has established himself as a global leader.

“I feel like he is a people person, and that’s what people like about him. He cares for the people,” Goncalves said.

“Pope Francis kind of is able to cross over, to be not only a really good caregiver of his own flock but to other flocks,” Fonti said.

“Ministers of faith, ministers of the word, are few and far between in this society. We need ministers, proclaimers of hope, and this in the midst of a changing and a turbulent word — and we represent that.”

Group Tries to Save 'Harold and the Purple Crayon' Author's Home

Stolen Shih Tzu Reunited with Family After Thief Turns Self In, Police Say

Man Dies After He's Pushed Into Road, Dragged by Car and Run Over: NYPD