Only four out of 16 bakeries remain in DNAinfo New York's Brooklyn Brackets' dessert category after last week's round of voting.

Red Hook's Baked sailed ahead of Cobble Hill's Bien Cuit, and One Girl Cookies won over the Caribbean treats from Allan's Bakery in Crown Heights.

But third seed favorite Ovenly was no match for fans of the fruit-filled pastries at Brooklyn Kolache, who sent the Bed-Stuy bakery ahead with 63 percent more votes.

And Bed-Stuy's Le Paris Dakar pulled 35 percent more votes over Gowanus pie shop Four and Twenty Blackbirds, sending the French pastry shop to the next round of voting.

Only two can make it to the final round of Brooklyn Brackets. Vote below — and choose which place deserves the title of best. 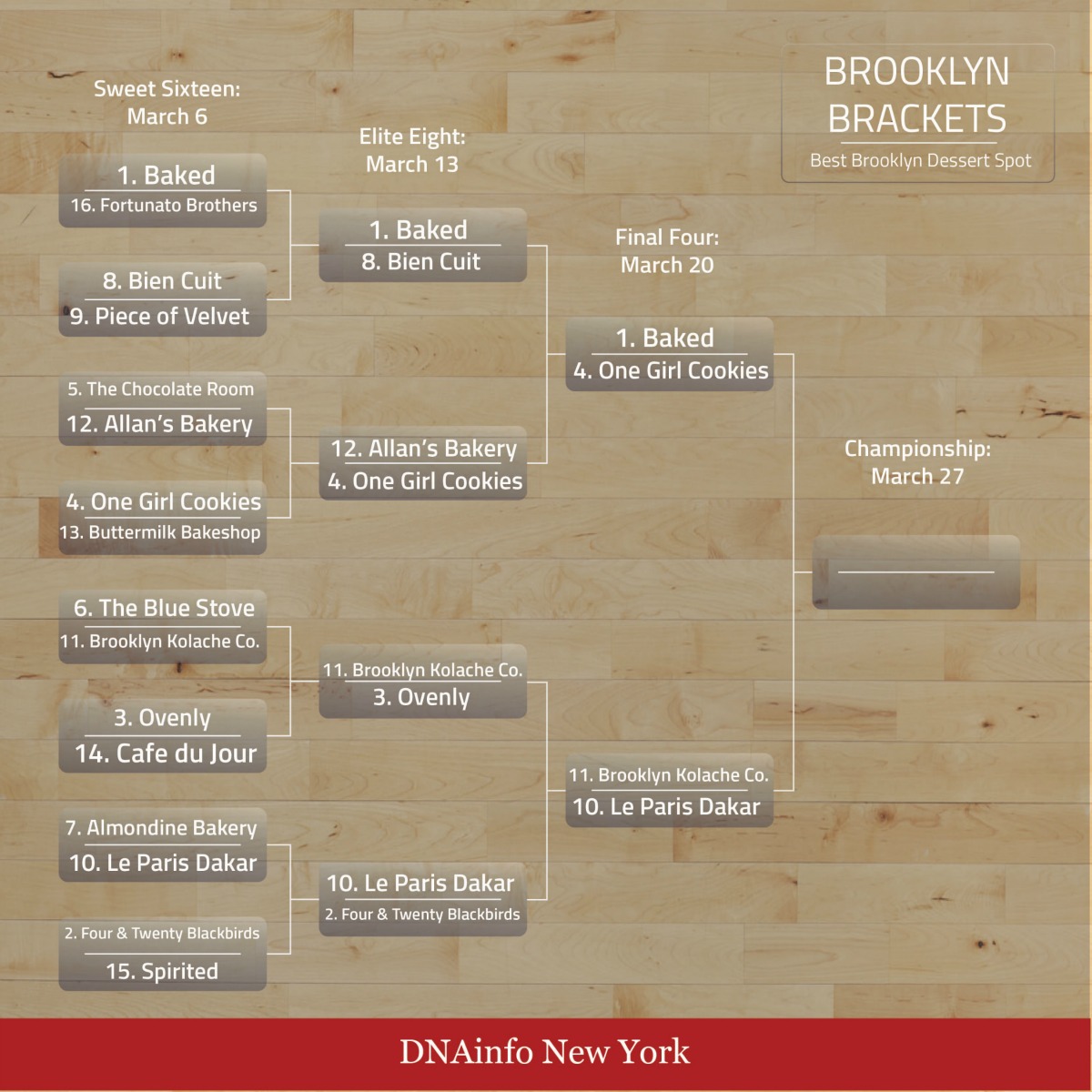 BAKED — 359 Van Brunt St. Red Hook's Baked is one of the neighborhood's go-to dessert shops, with brownies, whoopie pies and decadent layered and bundt cakes. The bakery has since expanded to TriBeCa, and owners Matt Lewis and Renato Poliafito have launched their own cookbooks, granola and baking mixes. The Van Brunt Street space is also a great place to kick back with a cup of coffee and something sweet.

ONE GIRL COOKIES — 68 Dean St. and 33 Main St. One Girl Cookies, with locations in Cobble Hill and DUMBO, is known for its whoopie pies, shortbread cookies and cupcakes. The bakery focuses on aesthetic as much as flavor with delicately decorated treats that sometimes look too pretty to eat. In the short time One Girl Cookies has been around, it has become a go-to destination for locals and tourists.

LE PARIS DAKAR — 518 Nostrand Ave. If the tubs of Nutella on display aren’t enough to draw you in to Le Paris Dakar, the endless selection of crepes might convince you. Sweet selections include apple, Brie and honey, and strawberry and banana, as well as a variety of savory items to choose from. The Bed-Stuy bakery also serves up an array of pastries, macarons, and tiramisu.