Brooklyn Brackets: Vote for the Best Neighborhood Bar in the Elite Eight

BROOKLYN — When it comes to neighborhood watering holes, the bar has been set high.

DNAinfo readers weighed in last week on their favorite local bars and chose eight winners from a March Madness-style field of 16 contenders.

Fans of The Way Station in Prospect Heights can pour themselves a celebratory cocktail — it was the clear winner, racking up the most votes overall and knocking out its neighbor Sharlene's in the process.

The first round also saw plenty of upsets. Top-seeded candidate Union Pool was bested by a dark horse contender, Skylark, and a killer fried chicken sandwich couldn't save third seeded The Commodore from defeat by Berg'n.

If dogs could vote, they might have saved Park Slope's The Gate from losing out to Bed-Stuy's Project Parlor, and lovers of Lavender Lake might need a stiff one: it lost by just two votes to The Emerson.

Who will win round two? Have a drink and choose from the eight candidates. Vote later this week in the elite eight for best desserts, and check back next week to weigh in on the final four in artisanal products, neighborhood institutions, burgers, desserts and bars. 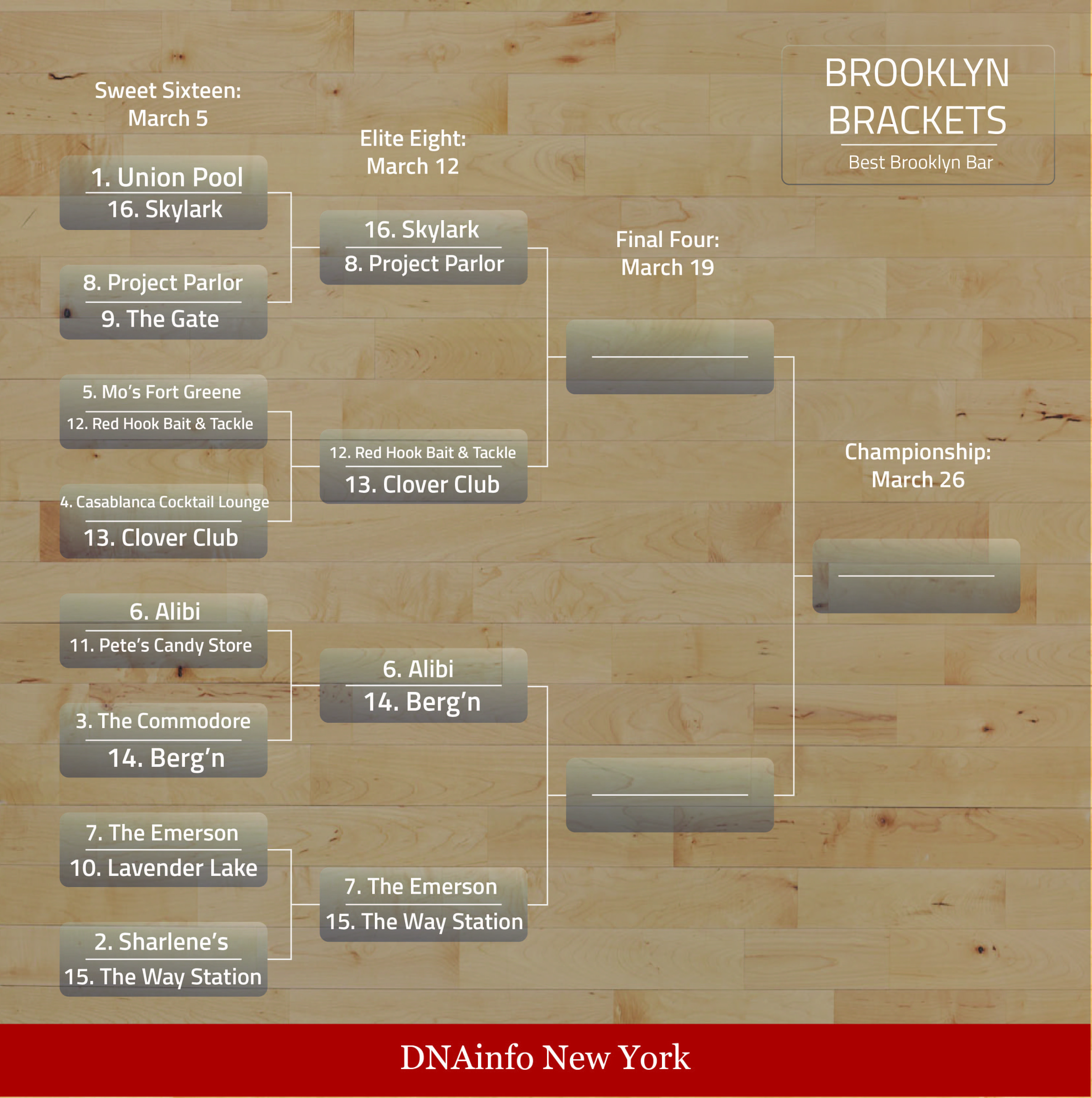 VOTE IN THE POLL BELOW

Alibi — 242 Dekalb Ave. Alibi is the original Fort Greene dive bar. Located just below street level and without a sign in sight, this drinker's paradise is most often frequented by locals, old-timers and the occasional Pratt student. The bar, which locals say has been around for more than 40 years, has a pool table and a back deck. You can also catch "Jeopardy!" on the television nightly.

Berg'n — 899 Bergen St. This 9,000-square-foot beer hall, which opened last August, features food stalls from Ramen Burger and Mighty Quinn's BBQ, as well as a cafe bar. Brooklyn Flea also sets up shop in the building every Saturday. As a result, it has become a packed-every-night destination for local craft beer lovers, foodies and the coffee shop set.

Clover Club — 210 Smith St. Clover Club is known for its extensive selection of evening and brunch-time cocktails. There are also juleps and punches served in large glass bowls with ladles for sharing. The drinks hotspot also has a solid food menu, offering items like the lamb burger with goat cheese, fried oysters on the half shell and steak over toast.

The Emerson — 561 Myrtle Ave. This Clinton Hill bar is well-loved for its grand backyard where hordes of locals and Pratt students congregate in the warm months. It's the kind of neighborhood joint where you can find people reading at the bar, making out in the seating area or dancing wildly by the pool table.

Project Parlor — 742 Myrtle Ave. A bar for all seasons, Bed-Stuy's Project Parlor offers everything from a summer Guinness float to hot mulled cider. Its massive backyard space is lined with picnic tables, perfect for BBQ cook-offs and day drinking. In colder months, warm up on the antique couches with drinks like flaming green absinthe.

Red Hook Bait and Tackle — 320 Van Brunt St. Everyone probably knows your name at the Red Hook Bait and Tackle, a classic but slightly offbeat dive bar. Its walls are covered with taxidermy and fishing gear. The sign that still adorns the storefront was used by a former social club that existed there long ago. The neighborhood bar opened in 2004 and is popular among locals for its relaxed atmosphere and cheap drinks.

Skylark — 477 Fifth Ave. Free popcorn and a mish-mash of cozy vintage furniture give Skylark a welcoming vibe that makes it feel like you're drinking in your own living room, or maybe your grandparents' den. The comfortable feel extends to the menu, which includes a mac and cheese sandwich.

VOTE FOR THE BEST BAR BELOW