HARLEM — When Iesha Sekou can't remember the last time someone got shot in the neighborhood, she simply yells out of her office door, “How many days we got?” to no one in particular.

“Three hundred and thirty four,” someone recently yelled back.

That number, which has since gone up to 346, shows the level of effectiveness of Sekou’s nonprofit, Street Corner Resources, in reducing gun violence.

Two years ago, when Street Corner Resources signed a city contract as part of a $12.8 million citywide program called Cure Violence, their job was to tackle gun violence in an eight-block area known for shootings, from 137th to 145th streets between Lenox and Seventh avenues.

Things got off to a rocky start. 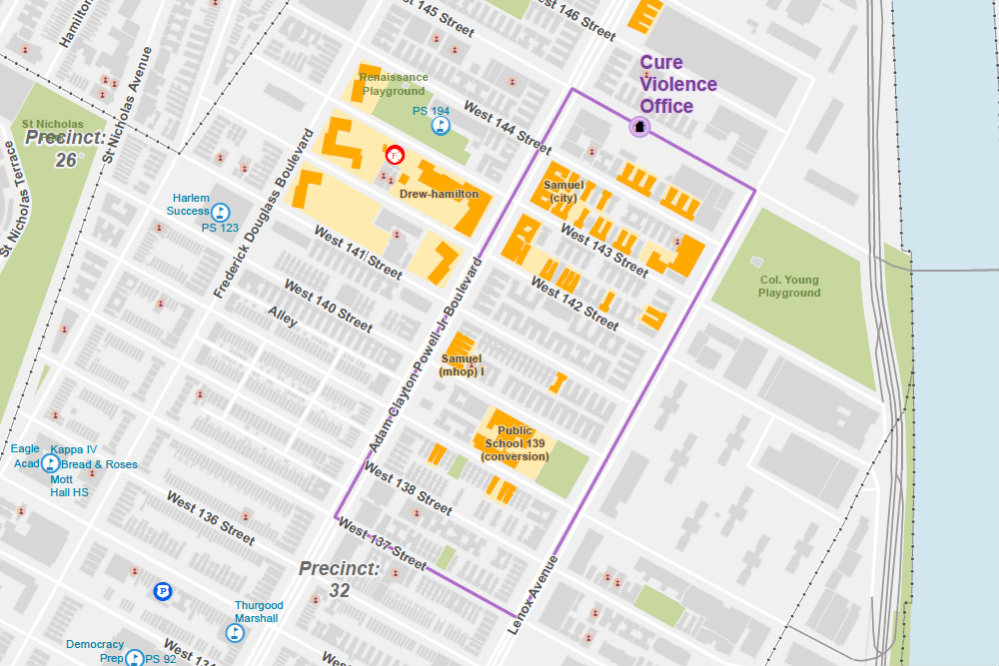 “We walked into maybe seven or eight shootings when we got the contract,” she said. “That first year was a little rough. A lot rough.”

Street Corner Resources tries to prevent shootings before they happen by addressing everything that leads up to one. The nonprofit offers young men in the neighborhood free job-placement programs, adult-education classes, and connects their families with legal aid and affordable housing services.

Street Corner Resources hires a small crew of men who grew up in Harlem, many of whom experienced violence themselves, to establish credibility while connecting with the youth.

Still, it took them over a year to win over skeptical Harlemites.

Now, people who once sold drugs for $50 or $60 a day are interested in getting a job that pays $100 a day, said Rob Moore, a social worker for Street Corner Resources.

“They ask, ‘What’s going on, is there a chance to get money?’” Moore said. “It’s an opportunity to get paid and get paid a decent amount that competes with their drug sales.”

Once a handful of people joined, they told their friends, and Street Corner Resources grew. They now have a sound studio and host a monthly open-mic, called “Peace Café,” where anyone can perform.

Data shows that shootings are down 39 percent in the 32nd Precinct. All of the shootings have happened outside Street Corner Resources' engagement area.

Part of the decreased is linked to more gun arrests in the Drew Hamilton Houses and Polo Ground Towers, according to Steve Davis, the NYPD's Deputy Commissioner for Public Information. Officers made 75 gun arrests in the 32nd Precinct between January and October, compared to 42 arrests during the same period last year, the spokesman said.

"The 32 Precinct Commander continues to work with Street Corner Resources as a community partner," Davis added in an email.

Citywide, the Cure Violence program is getting more attention. Both Mayor Bill de Blasio and Speaker Melissa Mark-Viverito praised its success during a town hall in East Harlem last month.

While she’s proud of 346 days without a shooting, Sekou is aware of the fact that the streak could end any time.

Over the last year, she’s experienced some close calls including a couple of calls reporting shots fired and one shooting just one block across the street from her area.

“There’s a focus on the number of days with no one shot but I try not to obsess on that because if you just focus on that, you don’t focus on taking care of the problem,” she said.