STATEN ISLAND — More than 10 years into its Staten Island's battle against the opioid epidemic, its efforts have been stymied by too few clinics in the neighborhoods with the most overdoses, a lack of detox centers across the borough, and coordination gaps among providers, according to a study released Wednesday.

The study, conducted by graduate students at Columbia University's School of International and Public Affairs, recommended the borough increase access to methadone and buprenorphine, focus more on aftercare of patients and create public awareness campaigns to reduce the stigma of addiction to help tackle the problem.

"As the opioid crisis on Staten Island continues to claim lives at a staggering pace, we must do everything in our power to take down the dealers peddling this poison and also ensure that people who suffer from addiction illness have access to the type of treatment services they need," said District Attorney Michael McMahon, whose office provided support to the Columbia students along with Special Narcotics Prosecutor Bridget Brennan.

"As detailed in this report, opioid addiction affects every neighborhood and cuts across all social lines in the borough, and it will require an all-hands on deck approach to finally put an end to it and save lives."

The report found many of the agencies providing services do not coordinate enough with each other on patients or focus on other mental health issues that lead to addiction in the first place.

"There are many services that currently exist on Staten Island aimed at aiding those suffering from opioid addiction," the study reads.

"However, there seems to be little coordination of services and there is reason to believe not everyone gets the kind of targeted, personalized care they need to succeed in recovery, as evidenced by the ongoing nature of the crisis."

The study gave a list of five recommendations for people working to tackle the issue on the borough and reported they had a "fervent commitment to embrace creative solutions presents immense opportunity."

One of recommendations was already implemented this summer when McMahon launched the SIHope website to provide a "one-stop" shop for addicts, family members and residents to find information and treatment option.

The report found that the ZIP codes 10314 and 10306 have the highest rates of overdoses in the borough, but residents there don't have easy access to treatment services. 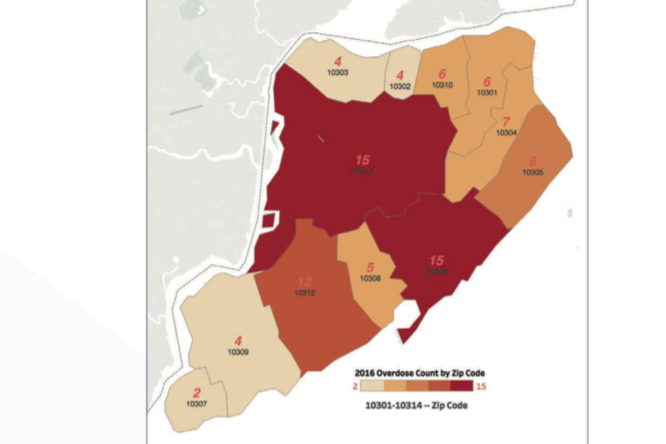 Both ZIP codes lack any outpatient medication-assisted treatment (MAT) or inpatient clinics and the only ones in the borough are "clustered" in the North Shore, something residents in the area have long complained about.

MATs, like methadone and buprenorphine, have been found to be effective ways to kick opioid addiction, but the few options in the borough are at or near full capacity, the study found.

While elected officials including Borough President James Oddo have pushed for more buprenorphine access, he previously said some doctors have been resistant.

"Staten Island physicians do not want to dispense buprenorphine," Oddo previously told DNAinfo New York. "I believe they have some preconceived notions of who this clientele would be."

One of the report's first recommendations for Staten Island is expanding MAT access and clinics, especially in ZIP codes hit the hardest.

The report also found that the opioid epidemic has hit every neighborhood, age group, race and socioeconomic background in the borough.

The city has been in the midst of a prescription drug and heroin epidemic for years, with The Bronx and Staten Island being hit the hardest.

Citywide, fatal overdoses climbed 46 from 2015 to 2016, with Staten Island seeing its deadliest year on record since 2000 with 116 residents dying.

Officials blamed the spike on the introduction of fentanyl — a synthetic opioid 50 times more potent than heroin — to many batches. The drug was found in 44 percent of overdose cases in 2016, according to the city's Department of Health.

Experts and the report found that one of the key drivers in getting people hooked on opioids was the overprescription of pills like Oxycodone by doctors for pain. McMahon previously said that four out of five addicts in Staten Island started using when they were prescribed pills after an injury.

New York Attorney General Eric Schneiderman announced Tuesday that he teamed up with attorney generals from 40 other states to investigate the role opioid pill manufactures and distributors played in fueling the epidemic, NPR reported. Investigators issued subpoenas to eight companies to see if they misled doctors and patients about how effective and addictive the pills were.

Despite many services existing to help residents kick the drugs, the new study found they fail to coordinate with each other on patient care and on public awareness campaigns to reduce the stigma around addiction.

"The various efforts that do exist often lack coordination, which results in the dissemination of many disjoined messages," the report reads.

"The lack of knowledge, the disjointed campaign efforts, and the gap in public awareness contribute to the perpetuation of stigma and shame (described in previous sections) that allows the often-articulated culture of denial to saturate the island."

The report recommended they create a coordinated referral system, focus more on the individual mental health issues of patients aside from addiction and ensure more persistent follow ups.

It also found providers should strengthen aftercare programs — like social activities, official counseling — for patients when they get out of rehab.

Experts previously said patients who break from drugs as part of rehab program have a higher chance of overdosing — sometimes fatally — if they relapse because their tolerance is lower but they still use the same amount of heroin as before.

Fentanyl makes that more dangerous because it takes a much smaller amount to overdose than on heroin, officials have said.

"Now that one bag is so much more potent than it used to be, it's very common for us to see people coming out of rehab and overdosing because their bodies can not handle the higher potency of the drug," NYPD Assistant Chief Edward Delatorre, borough commander for Staten Island previously told DNAinfo New York.

Fatal Stabbing at Hotel Triggered by Texts From Another Man, DA Says