BEDFORD-STUYVESANT — Two people were hurt in two fires that erupted within an hour of each other on opposite ends of the neighborhood Wednesday night, FDNY officials said.

Firefighters responded to a call at 8:13 p.m. to a fire in a fifth-floor apartment at 1853 Fulton St., a seven-story building that’s part of the Brevoort Houses between Ralph and Patchen avenues, an FDNY spokesman said.

Sixty firefighters from 12 units managed to get the fire under control by about 8:45 p.m., but two people suffered minor injuries and were transported to an area hospital with minor injures, a spokesman said.

It was not immediately clear how many residents had to be evacuated, and the cause of the fire was still under investigation Thursday morning, officials said.

Then flames erupted inside a vacant four-story building at 952 Bedford Ave., between DeKalb and Willoughby avenues, about 9:38 p.m., officials said.

There were no injuries in the Bedford Avenue fire, which also was still under investigation Thursday morning, officials said. 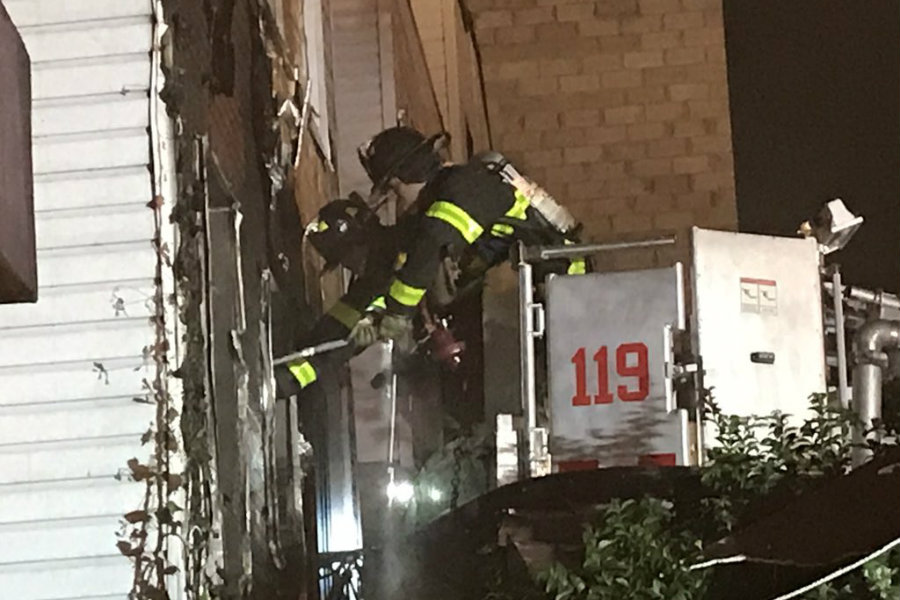 Ashley Feinberg, a Bed-Stuy resident who lives next to the vacant building, said she started smelling smoke around 9:30 p.m., and headed outside to see firefighters dousing multiple floors, sending plumes of smoke into the air.

“I heard all these fire trucks so I looked outside and there were like four fire trucks pulled up in front of the building,” Feinberg told DNAinfo New York. “And then I guess they went in and started putting it out 'cause I started seeing huge plumes of smoke and embers coming down.”

The Bedford Avenue building, which neighbors told Feinberg had been empty for at least several years, has one complaint from Dec. 1, 2016, for lacking a certificate of occupancy, Department of Buildings records show.

Representatives of the NYC Housing Authority did not immediately respond to a request for comment, and contact for the owner of the Bedford Avenue building was not immediately available.