NEW YORK CITY — Do you love New York as much as the guy who has a tattoo of a kraken attacking the Staten Island Ferry? How about the man with the Domino Sugar Factory inked on his leg?

DNAinfo New York spent the summer traveling the boroughs looking for the best New York City-themed tattoos and came up with some amazing ones. We found a Unisphere, the Williamsburgh Savings Bank, manhole covers, and architectural drawings from the Brooklyn Bridge permanently etched on residents' bodies. 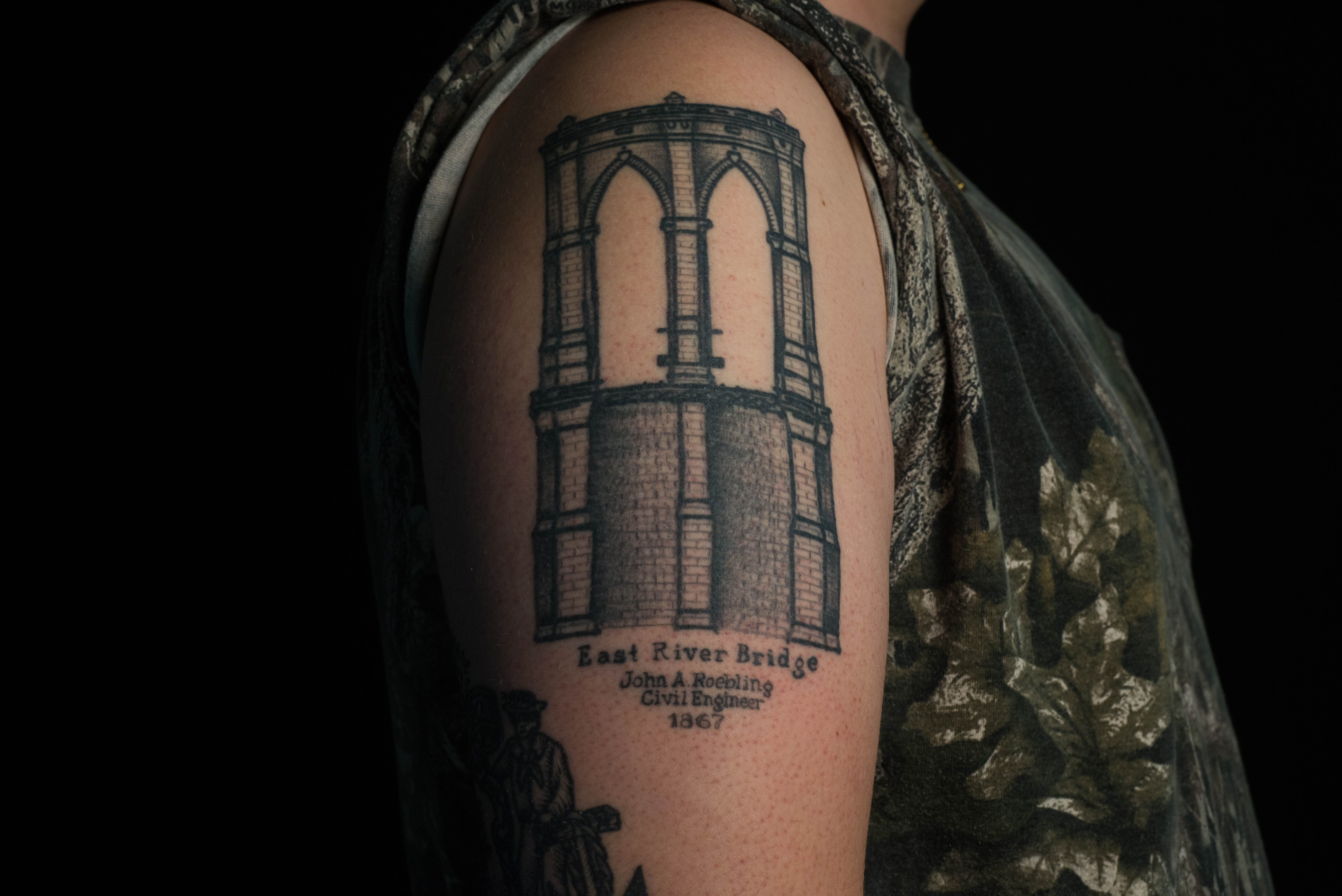 William Warren, 22, grew up in Brooklyn but recently moved to Portland, Maine. He got matching tattoos of the Brooklyn Bridge with his father, Doug Warren, who still lives in Clinton Hill. (DNAinfo/Nicholas Rizzi)

"New Yorkers are pretty staunch in their love of their city," said Mehai Bakaty, owner of the East Village's Fineline Tattoo, the oldest operating tattoo shop in Manhattan. "I'm born and raised here so I know that for a fact."

"I think it probably has something to do with that, that young person growing up, possibly going in the military, and wanting that reminder of their home," he added.

City-themed tattoos are some of the most popular requests he gets at his shop — on par with patriotic ones — and it isn't a new phenomenon. Bakaty's seen evidence of tattoo flash from the turn of the century of landmarks such as the Statue of Liberty. He's done plenty, even when he tattooed illegally with his father in their Bowery apartment during the prohibition of the art up until 1997.

Plenty of native New Yorkers still walk in his shop to get something to show off their hometown pride, but Bakaty said his shop's started to see more tourists coming in to get a simple outline of Manhattan to remember their trip.

"A lot of the time when we're doing tourists, they're going to get these very specific things realizing that they'll probably never come back," he said. "It's an ideal they'll want to hold as some point in time in their life and that's a pretty special thing." 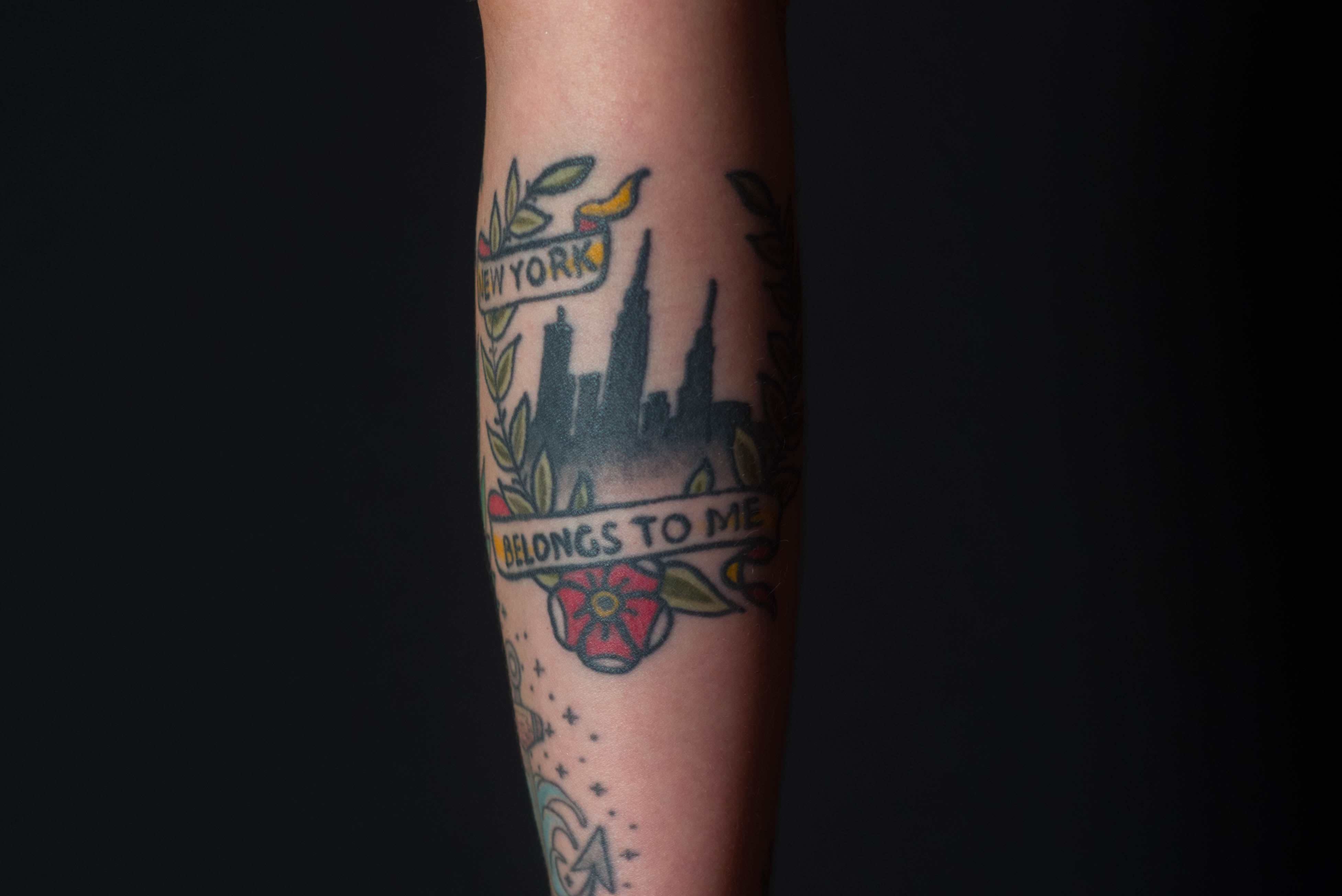 Joanna Trumino, a Fresh Meadows native, got the outline of the city on her arm with a lyric from a Roger Miret and the Disasters' song, a New York City Hardcore band. (DNAinfo/Nicholas Rizzi)

But the locals tend to get more creative.

Andriena Uribe knew she wanted to pay homage to where she was born and raised, The Bronx, for her first tattoo.

She finally took the plunge when she was 19 and headed to a shop down the block from her West Fordham apartment to get a simple outline of her home borough on the front of her arm.

"I've explored the borough so much I feel like I've owned it," said Uribe, who works as the bar manager for The Bronx Beer Hall. "These are my stripes." 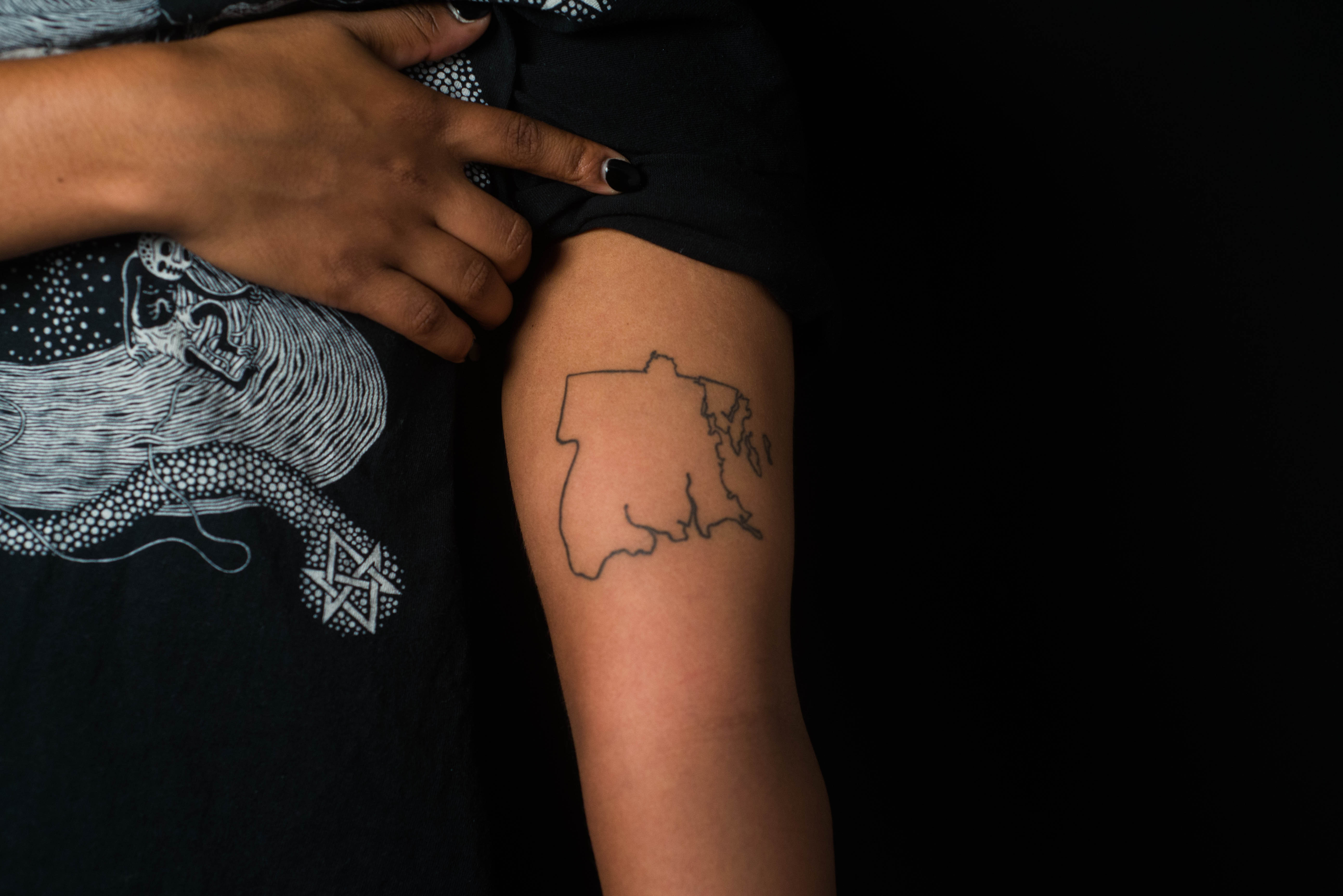 Mark Foggin, a consultant born in Staten Island who has called Morningside Heights home for years, settled on two things most New Yorkers see everyday for his tattoos: manhole covers and water towers.

"I wanted an iconic symbol of New York that not everybody else had and the more pedestrian it was the better," said Foggin.

"I'm such a fan of New York City history and policy that everything I've done in my life, professionally and for personal enjoyment, has really been about studying the city and how it works. I'm particularly an infrastructure nerd so that's why I gravitated towards things like sewer covers and water towers." 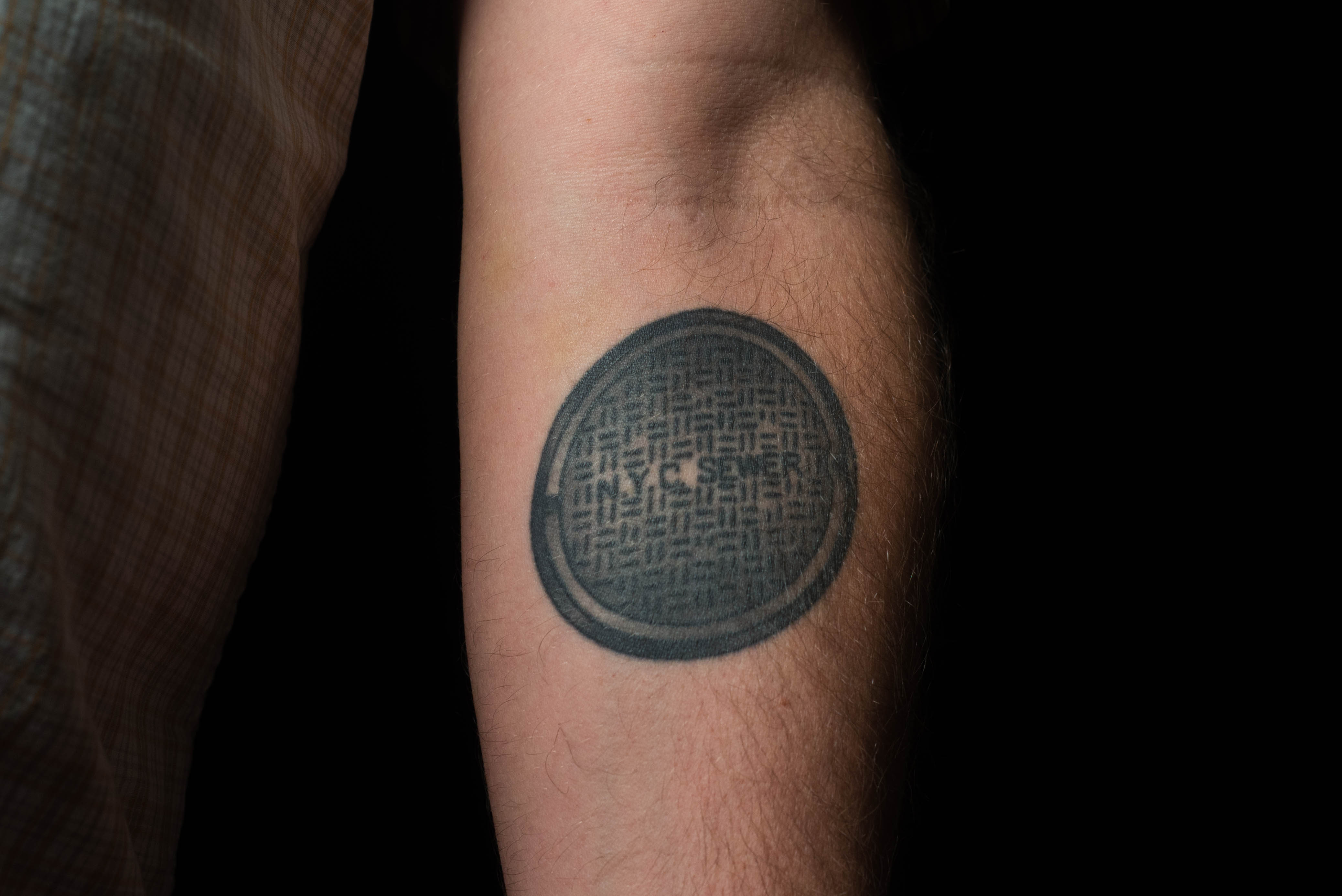 Mark Foggin's first tattoo was a manhole cover on his arm. (DNAinfo/Nicholas Rizzi)

For those who stayed on Staten Island, almost nothing is more iconic than the Staten Island Ferry. Which is why Jay Sykes got his right forearm inked with the boat after he left his job to open a brewery near the terminal.

"It was just a symbol of laying down my roots here," said Sykes, one of the owners of the Flagship Brewing Company. "This is where I'm going to open a business and continue with the rest of my life." 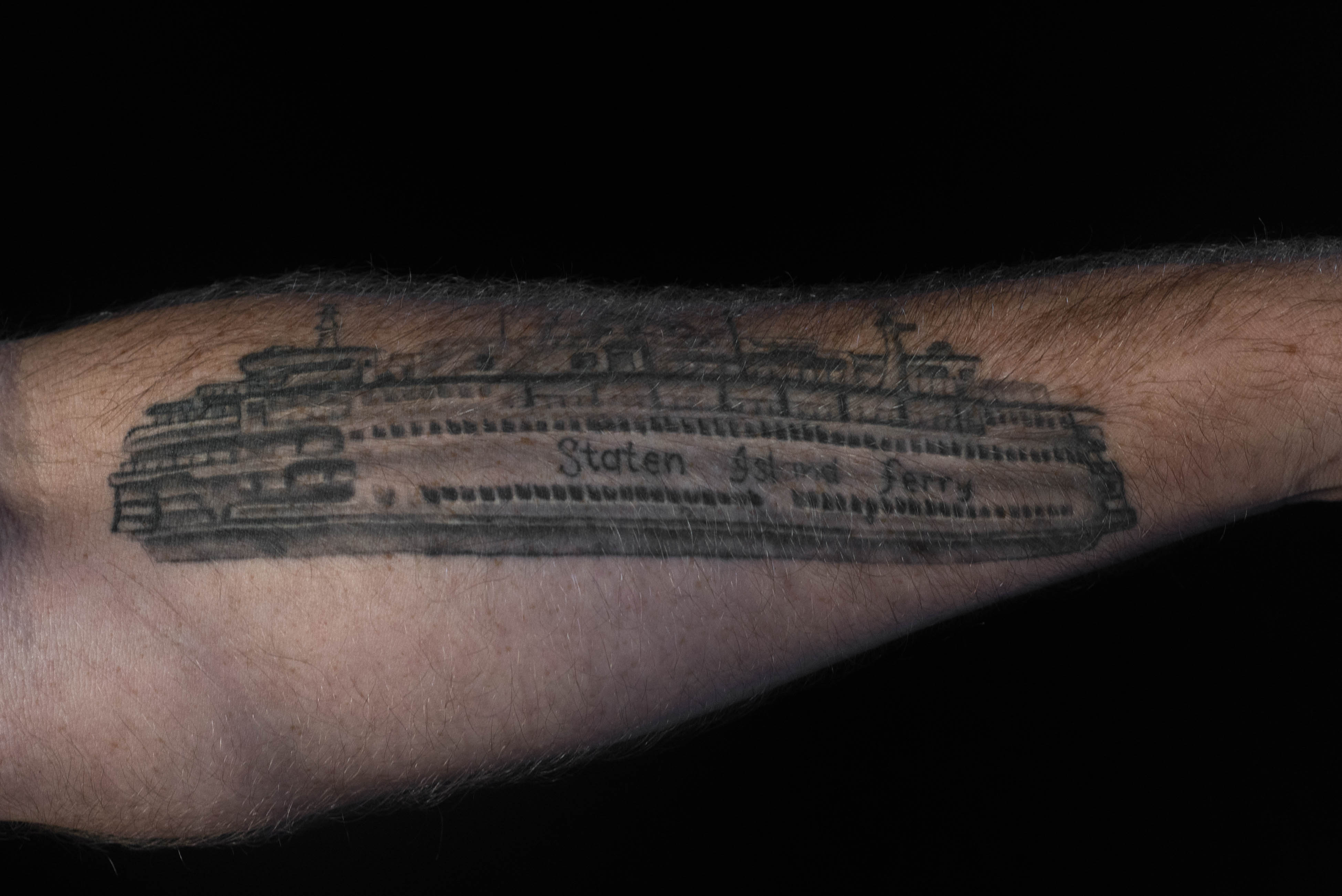 West Brighton author Rob Hart, who just published his fourth book "The Woman from Prague," also chose the ferry but added a twist: the iconic orange boat is being attacked by a kraken.

Hart said it was a play on the design he used for his wedding cake which had him and his wife on top of the ferry with weapons fighting off an octopus. 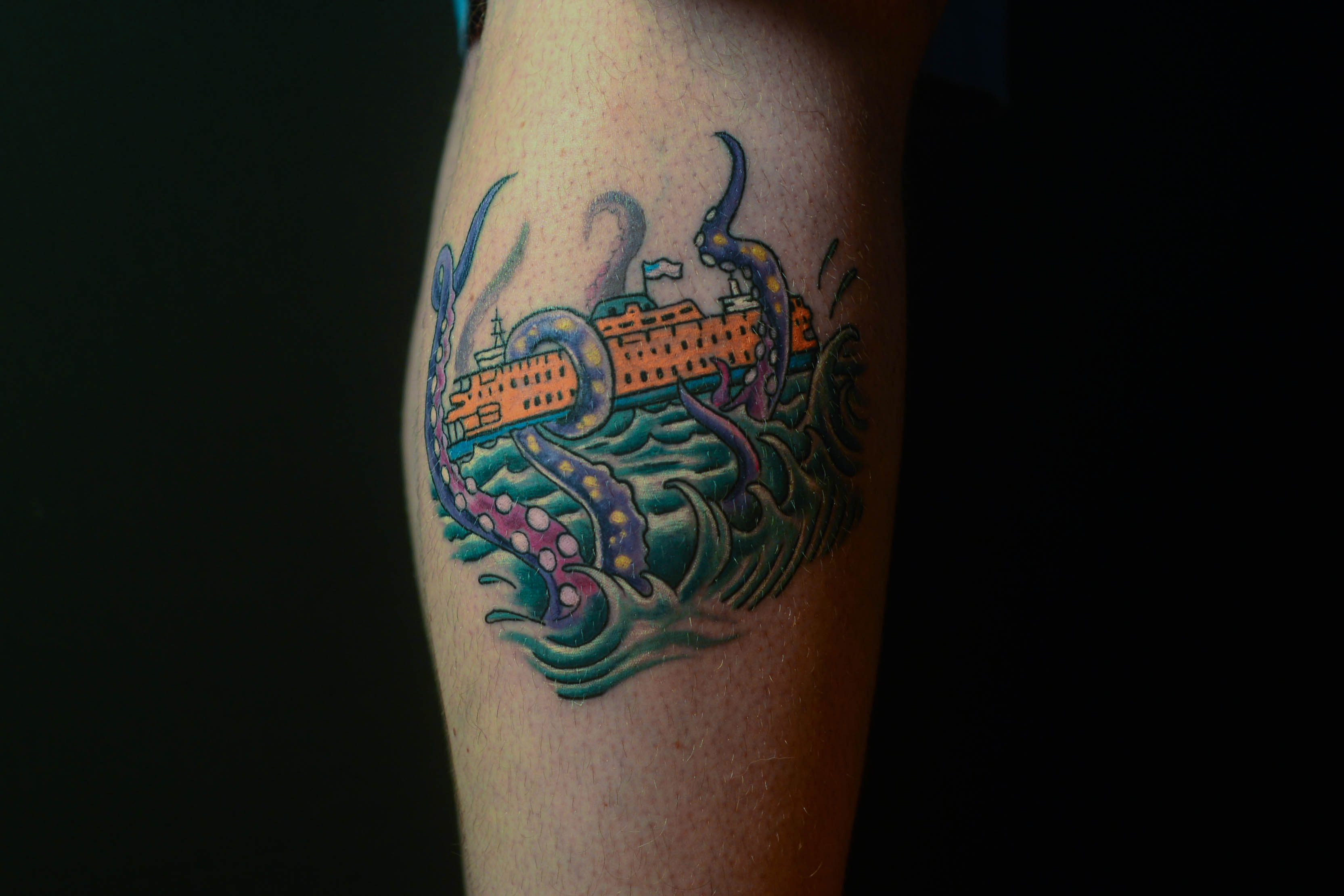 Some New Yorkers aren't content with just a single tattoo here and there on their body to show their love and instead spend hours under the needle to get get more intricate pieces.

Adil Ali, who lives in East Elmhurst and owns an auto body shop in Crown Heights, got a half-sleeve of several Queens landmarks for his first tattoo to pay homage to the world's borough, including the Queensboro Bridge and the Unisphere. 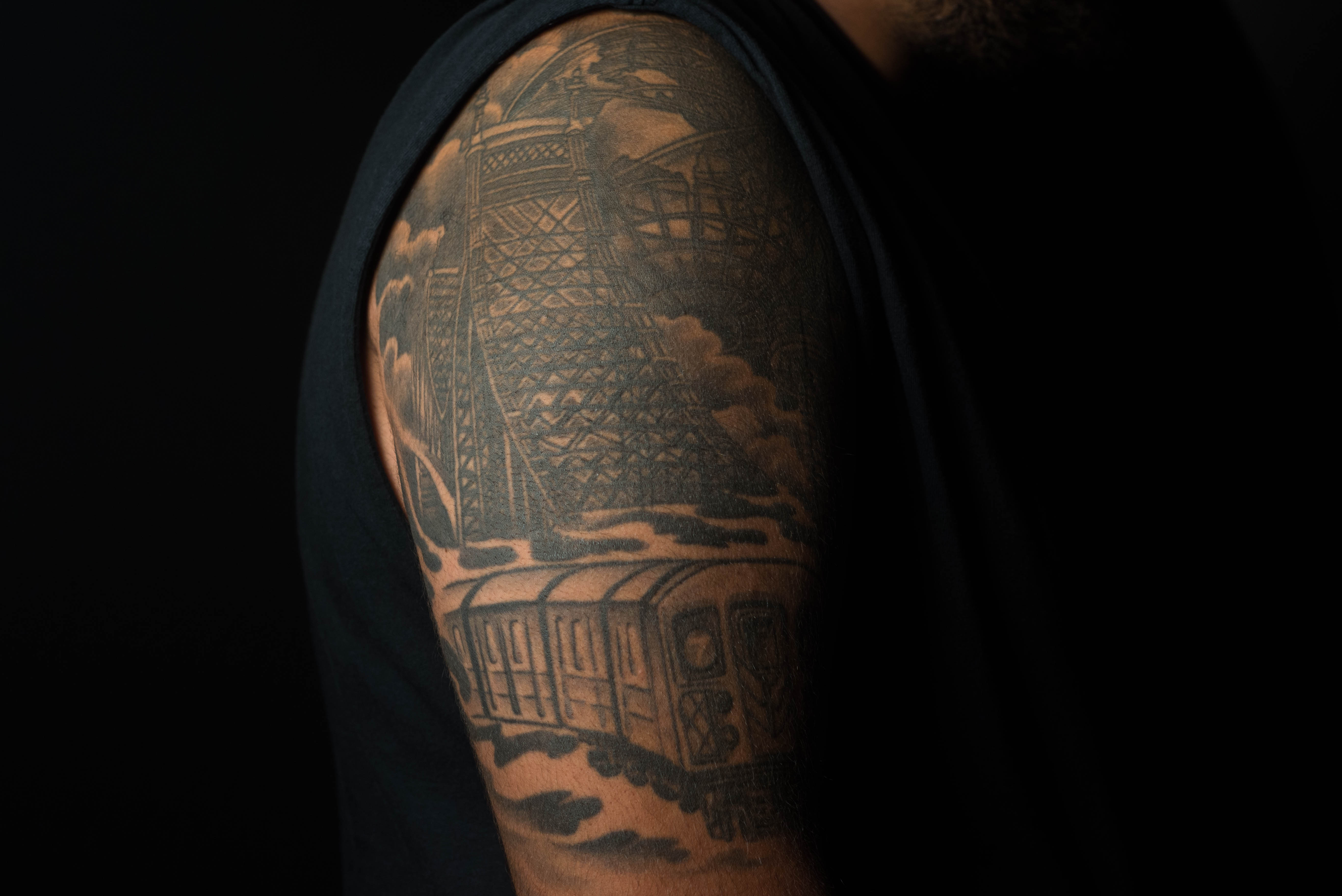 But few are as committed as David Dyte, who wasn't even born in the country but has covered most of his body with Brooklyn landmarks.

Dyte grew up in Melbourne, but moved to the city in 1999 where he met his wife and settled in Chelsea for a few years. He was miserable until they finally crossed the East River and moved to Park Slope.

"Once I moved to Brooklyn I felt at home in the city," said Dyte, a mathematician. "I never really did so much. I felt like an alien and I felt pushed around." 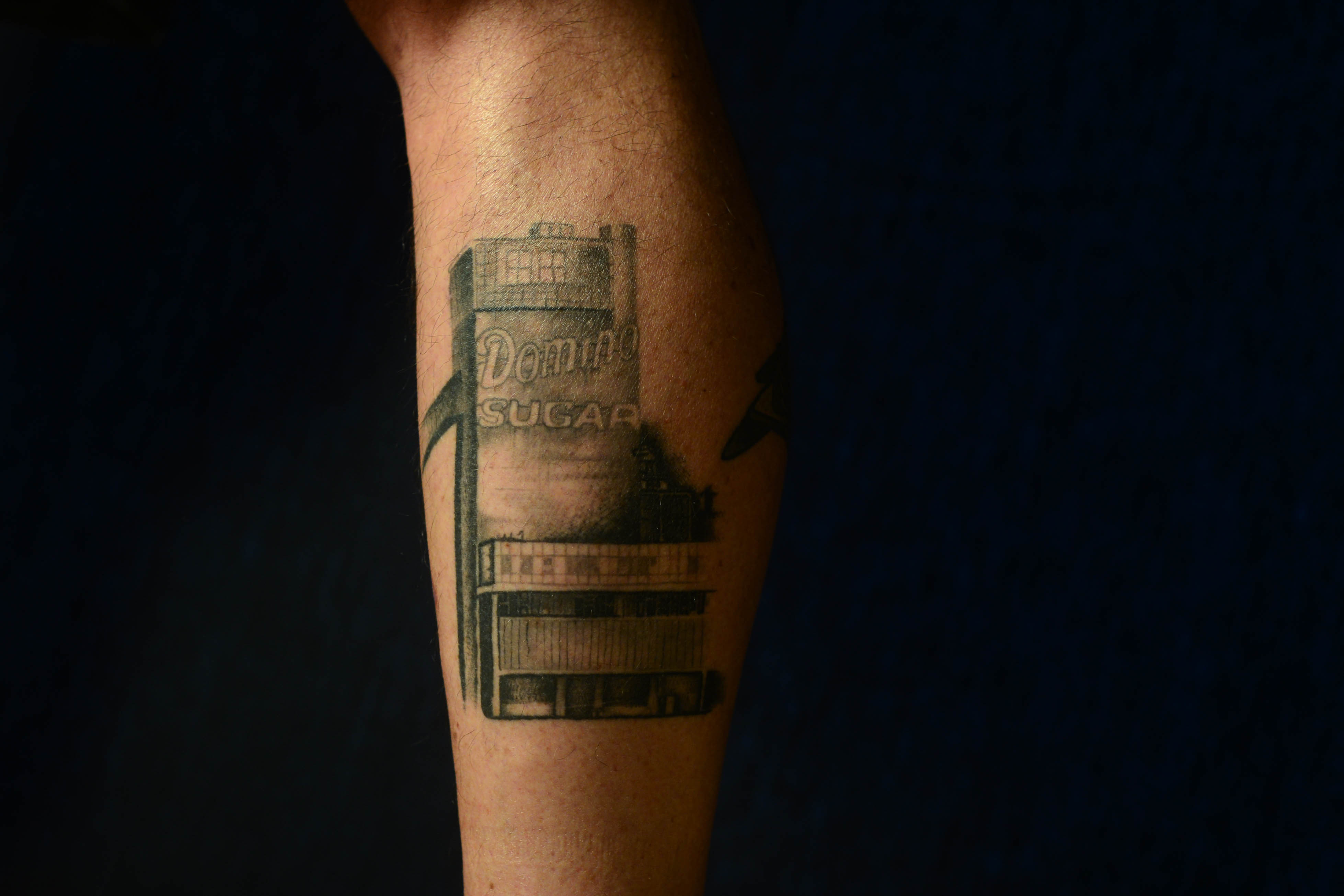 Dyte and his wife eventually bought a place in Downtown Brooklyn and he got a Brooklyn Cyclones tattoo to show his love of the borough. That eventually turned into much more and Dyte is covered with different landmarks including the Domino Sugar Factory, the Brooklyn Bridge and Coney Island.

None are as striking as his back which has the Kentile Floor sign, the Williamsburgh Bank building, the Cyclone and an historic map of his neighborhood to tie them together. The whole piece took more than a year for tattooist Kati Vaughn to get on his back and it remains Dyte's favorite piece. 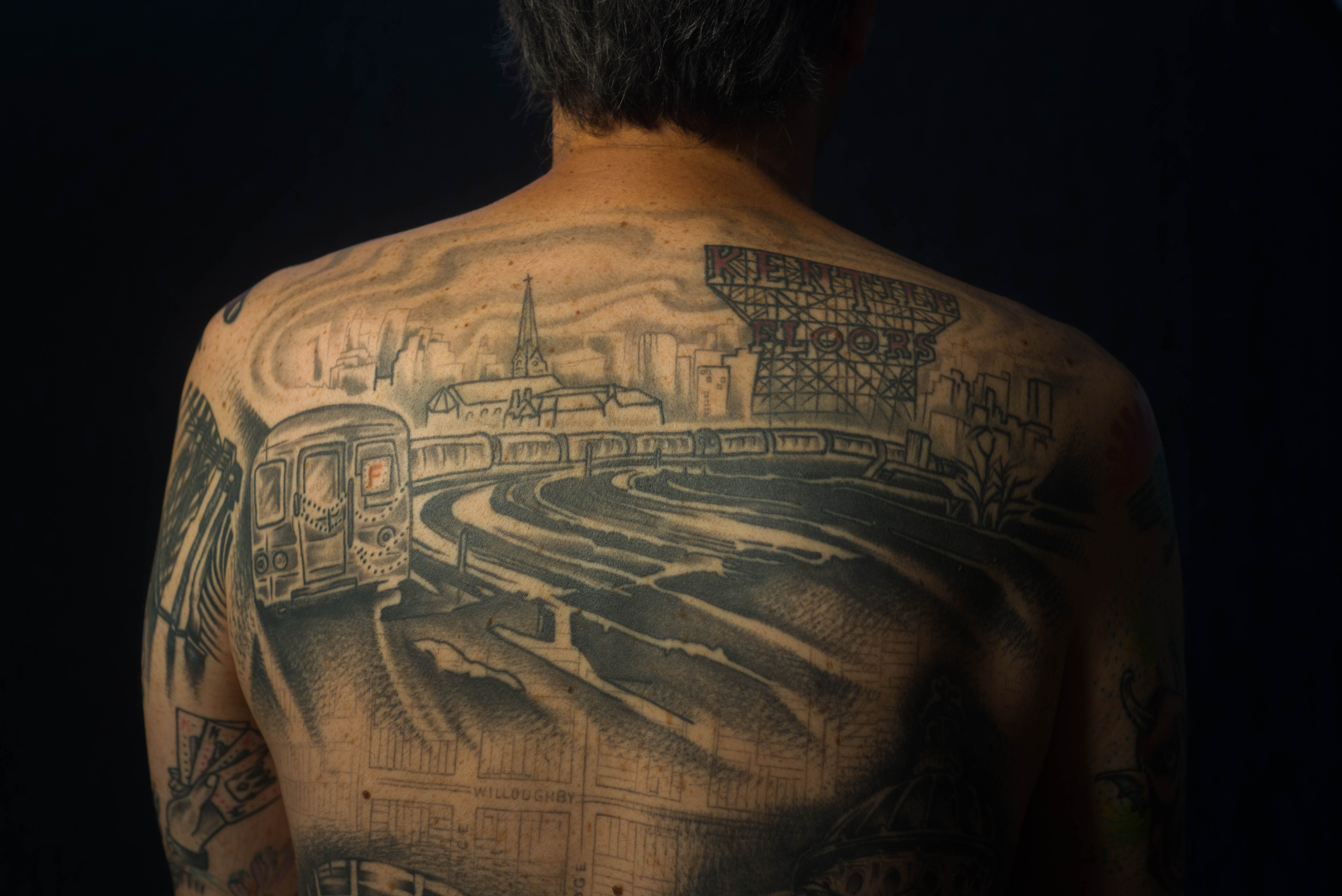 He's not done showing his love of Brooklyn on his body, and he talks with Vaughn often to plan the next tattoo.

"I'm still Australian, but Brooklyn's the home I made and I absolutely love it," said Dyte. "I don't have the accent, I didn't grow up here, but it's where I became who I am."

Have an awesome New York City tattoo? Want to be photographed for this project? Send an email to nrizzi@dnainfo.com with the design.