40 Years Since Blackout, Bushwick's Broadway Still Struggles to Swing Back

BUSHWICK — In its heyday in the 1950s and '60s, Broadway was an area as posh a shopping district as the Upper East Side, long-time residents recall, with a haberdashery, fine clothing stores and shoe stores, fresh produce shops and banks that looked like cathedrals.

"We had two beautiful movie theaters," recalled Virginia Giovinco, a lifelong Bushwick resident whose family moved to the neighborhood in the 1930s. "They had ushers, you didn't just walk in, they ushered you."

But any hint of that refinement vanished on this day 40 years ago when a power outage threw the city into darkness during a heat wave.

The neighborhood had been in decline for years, but on July 13, 1977 all pretense of law and order vanished in an instant, and looters smashed windows, yanked gates off of stores and pillaged shops up and down the street, wheeling away full clothing racks of clothing, refrigerators and everything in between.

"[It was] complete devastation. Something like when you see now when they show you Afghanistan, rubble on rubble," said Giovinco, who was a teacher at a Bushwick school at the time of the blackout. 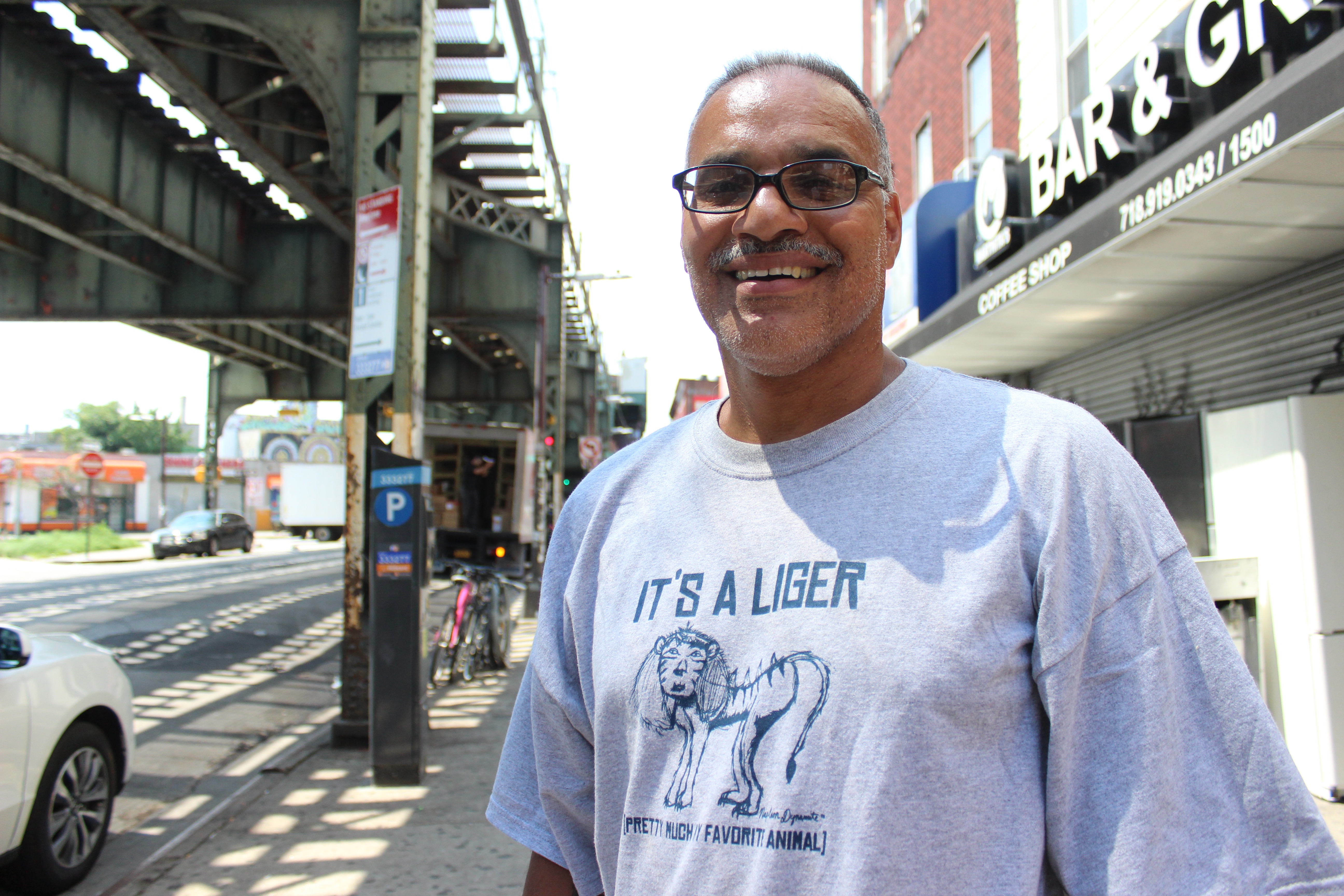 Robert Camacho was 17 at the time of the blackout. (DNAinfo/Gwynne Hogan)

Robert Camacho, 57, who was 17 at the time of the blackout, said he was on the street that night collecting merchandise as looters came out of stores with too much to carry.

"We knew it was something wrong that we were doing but what the hell, everyone was doing it," he said. "TVs, refrigerators, you had sneakers, you had clothing."

When the looting stopped, the fires began. Rumors spread along with the flames that store owners were torching their own empty stores to collect whatever insurance money they could.

As many as 20 fires blazed at once in Bushwick and hundreds of people were arrested according to reports from the New York Times. More than 100 stores were destroyed.

A few days later another massive suspicious blaze, dubbed the "All Hands Fire," ignited in an abandoned knitting factory on the corner of Myrtle and Knickerbocker avenues, devouring 23 more buildings and displacing around 250 people.

"What happened [the] next day was the saddest thing in our lives," Camacho said. "Seeing the owners going back to the stores and try to fix [them]."

"People were setting their places on fire, I was like, 'Wow what's gonna happen."

Eventually, though the adrenaline rush from the blackout waned.

Now Camacho, who has lived around the corner from Broadway his whole life, is anxious to help the street return to its former glory. He's working with a group of high schoolers at EBC High School, local Councilman Antonio Reynoso and several store owners on the block to advocate for fixes to the street like better lighting, patched potholes, murals, more open subway entrances and a jump start a long-defunct merchant's association.

But progress is slow and while nearby Knickerbocker and Graham avenues are bustling thoroughfares with a variety of stores, Camacho sees Broadway, dotted with 99-cent stores, Chinese restaurants with bullet-proof glass and nail salons, as still a shadow of its former glory.

"This is the forgotten side of Bushwick," he said. "This was the heart of Brooklyn."

Shop Owners Who Didn't Give Up on Broadway

While many lost everything in the blackout, a handful of stores didn't give up on Broadway that night. Some persist until today, selling their wares for more than 40 years now.

"It burned my competition. I was the only guy standing," said Monie Matalon, 67, who'd opened People's Bargain Store on the corner of Ralph Avenue and Broadway a few years before the blackout. Matalon was on his honeymoon in London with his wife the night of the blackout and heard about it through the newspaper. His brother, who was holding down the fort at the store, couldn't move past the experience and left the family business a year later, Matalon said.

It's very frightening when you see people's property being destroyed and the police can't do anything about it."

Matalon said that despite how much the neighborhood has changed over the years, he didn't think it would take much for something like what happened in 1977 to repeat itself. "It could happen at any time."

Residents Who Dug In

Many residents held their ground and began to rebuild what they could. Recently deceased Linden Street resident Avellar Hansley, took over a burnt-out trash strewn lot and sowed seeds that would become one of the largest vegetable patches around.

Her neighbor and good friend Giovinco, never dreamt of leaving her childhood home, she said.

"We were not the type to pick up and move," Giovinco said. Eventually she'd watch drug deals from her front porch and later crack vials piling up around her yard. "I had friends who would not even come to visit me because they were afraid to come."

Still she was loyal to her friends and neighbors and they watched out for one another. She installed bars on her windows and later an alarm and stayed put. 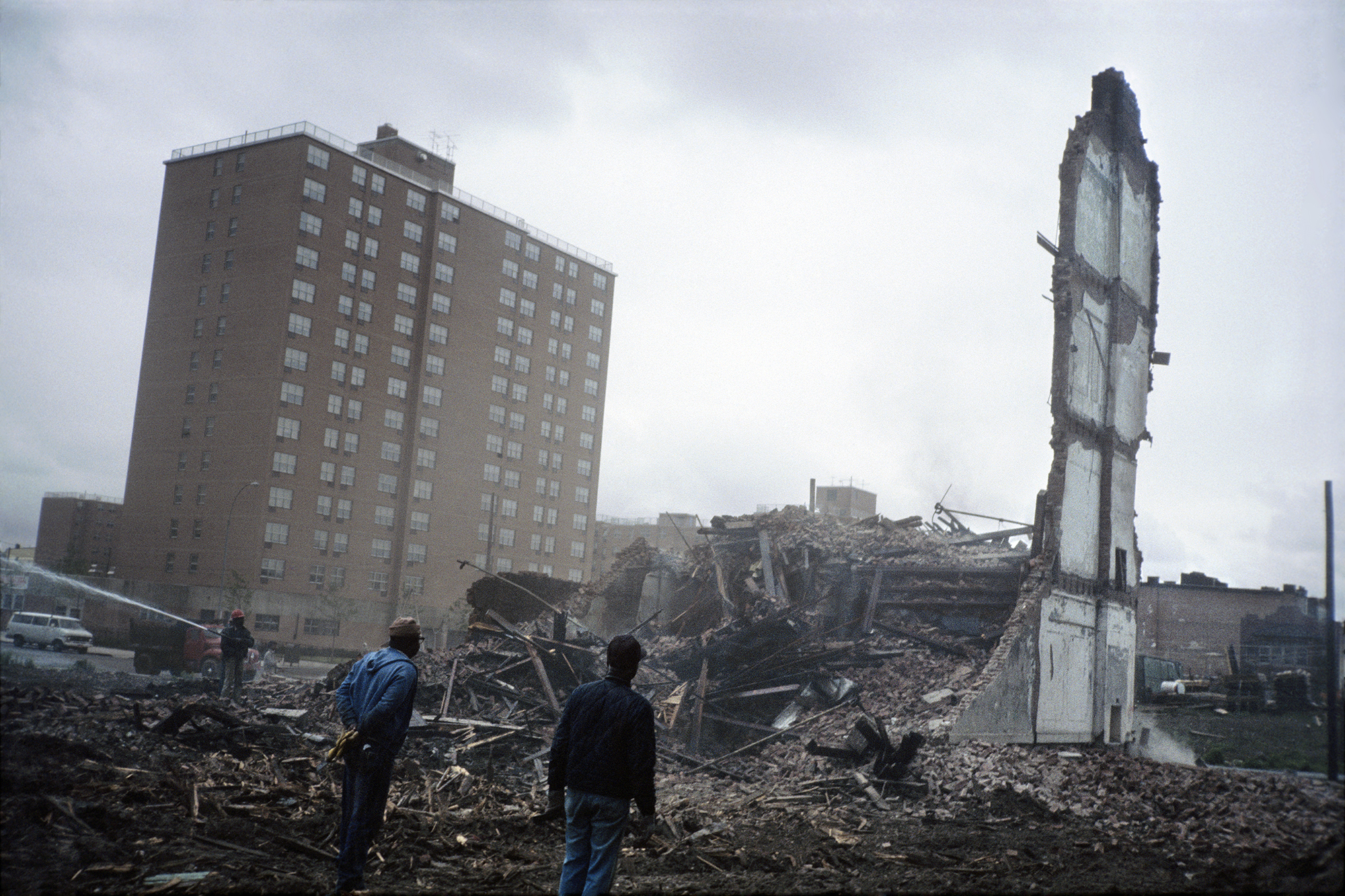 The area between Gates Avenue between Wilson Avenue and Knickerbocker Avenue was captured by school teacher Meryl Meisler in 1982, five years after the blackout and subsequent "All Hands Fire" had reduced seven city blocks to rubble. (©Meryl Meisler 1982)

In 1981, photographer Meryl Meisler went to Bushwick for the first time on her way to a job interview for a teacher position at a local school — where she would end up working for 14 years — it seemed like the blackout had just happened, she recalled. She documented the streetscape with her camera and years later, published books on the images she'd captured.

It was "burnt out. Buildings shuttered up, half torn down or missing," said Meisler. "It looked like there had been a tragedy or a war the week before."

Even if revitalization was slow to come to the area, State Sen. Martin Malavé Dilan, who was in his 20s at the time of the 1977 blackout, saw it as a turning point in Bushwick's history.

"Ironically it took the blackout to bring the attention of the mayor of the city of New York," Dilan said. "It brought attention to Bushwick."

Conditions were deteriorating in Bushwick in the years leading up to the blackout but were largely ignored by the city.

After the blackout, Mayor Edward Koch toured the area a year later, vowing to revitalize it and in 1981, the New York City Housing Authority development Hope Gardens was built, as city agencies recognized the dire need for safe and affordable housing in the area. 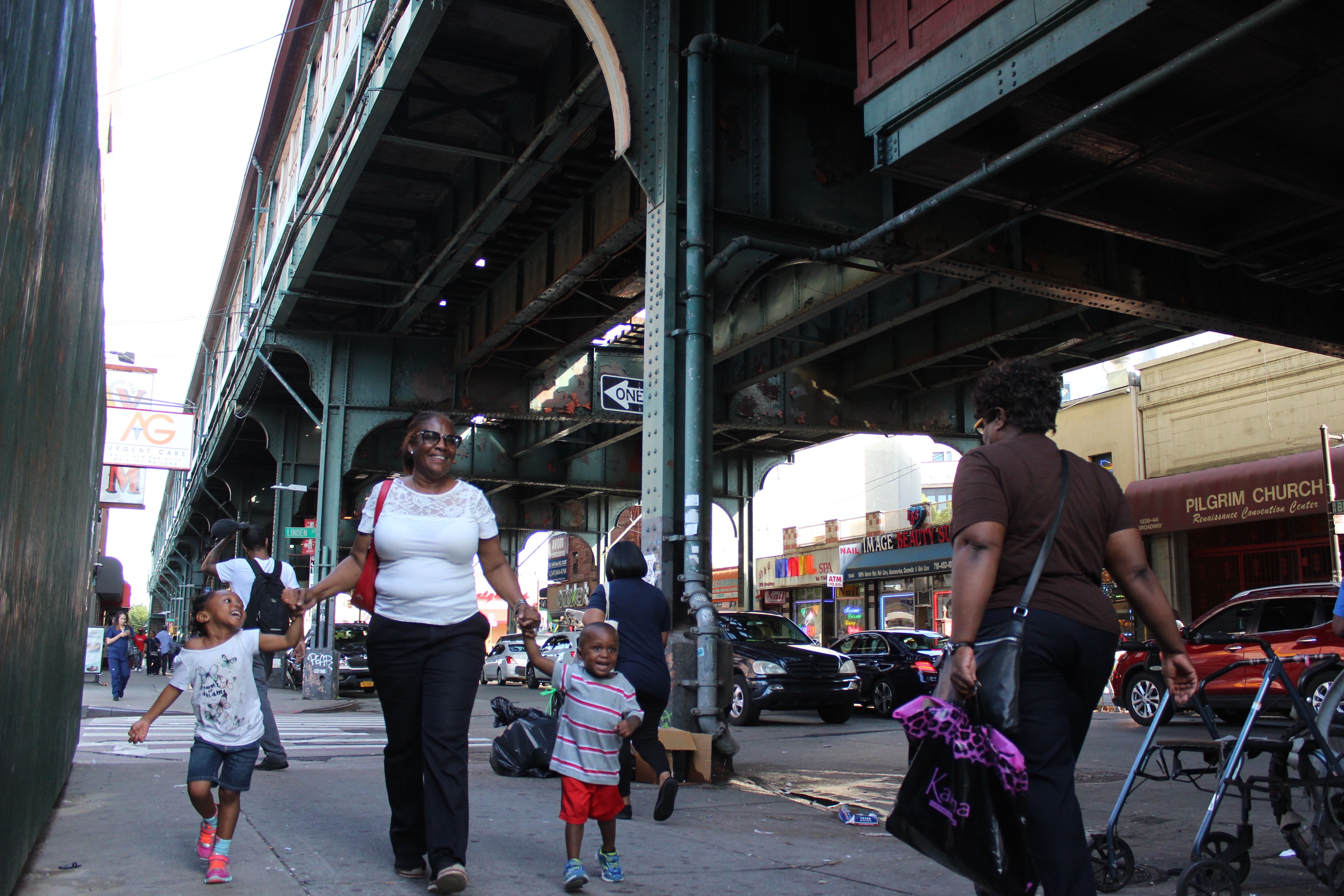 In many ways Broadway has swung back, even if it's a far cry from the glorious commercial thoroughfare of Giovinco's youth.

"Before there wasn't even a McDonald's or a Dunkin' Donuts," said Blas Taveras, 47, in Spanish, owner of the restaurant Las Marias, which opened 17 years ago. He's watched a wide array of different stores have opened up since he started on the block, pulling more and more foot traffic to the area.

And it's become an artery for neighborhood's music and arts scene, increasingly dotted with music venues and arts spaces like The Market Hotel, The Gateway, Project Secret Robot and the Living Gallery. Local coffee shop Little Skips East recently opened up an outpost on the block. Many of the newer businesses undeniably cater to a younger crowd of newer transplants to the area. 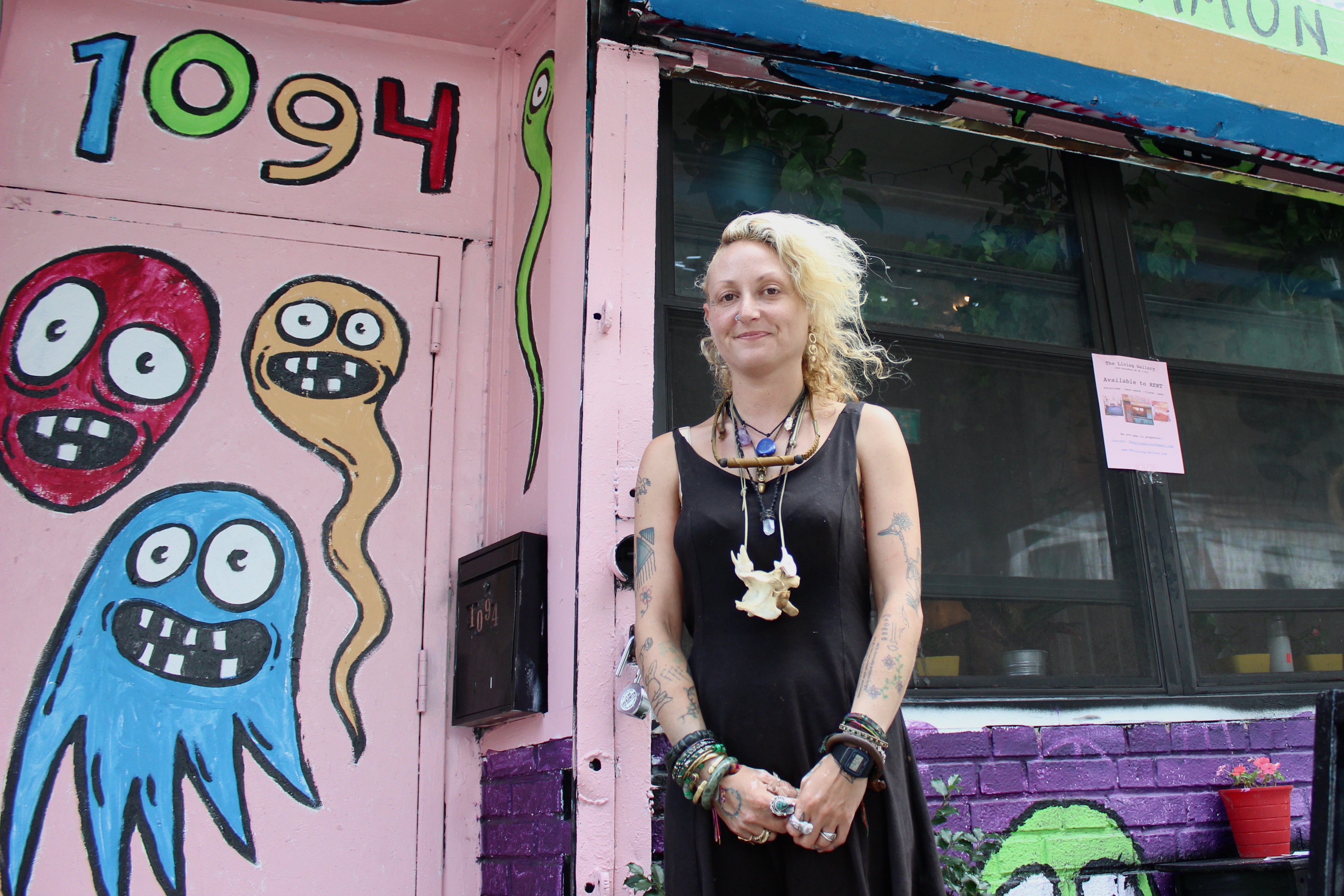 Nyssa Frank, 32, opened The Living Gallery at 1094 Broadway, an arts space, and venue that hosts group discussions and open mics for local teens, four years ago, lured from its location near the L train line by cheaper rents and what she saw as a more diverse neighborhood.

Frank is part of a group of merchants working with Camacho, EBC High School students to try to come up with a vision for the street's future. Right now, she said, the area is clearly in flux.

“Near my gallery, a fancy hotel opened up. There’s this nice hotel and there’s still the tire shop and the homeless man on the street. It’s a very confusing place," she said, referring to Hotel RL which opened earlier this year. "It’s in this weird state where you can’t really tell which way it’s going.”

The street could use a book store, more green space and affordable sit down restaurants instead of fast food, that would cater to family's in the area, she said, though added amenities come with the "Catch 22" of rising rents that make it harder for residents to stay.

The block has been targeted by community advocates for higher buildings in a potential rezoning of Bushwick that would allow for the spur of more affordable housing.

And with the 2019 L train shutdown of service into Manhattan, Broadway is on track to becoming an even more critical corridor.

Rachel Nelson, 45, owner of gallery and performance space Secret Project Robot that opened three months ago and Flowers for All Occasions, a gallery-cum-bar-cum-cafe, that's been on the block for around three years, said she hoped as development comes to Broadway that people will still frequent the small businesses that have set down roots along the block and not just big box stores.

"[It's important to visit] the stuff that is there, realizing that there is sort of a thriving culture here," she said. "You just have to walk around if you aren't shy and you just walk into places. There's a lot to be said for it."

And not all long-time residents share Camacho's discontent with Broadway.

Kenyetta Price, 44, was born and raised in Bushwick a block from Broadway. She said she's watched the street return to the bustling commercial strip she remembers as a child, and now buys nearly everything she needs there, even if it could use a few less nail salons and a bookstore or a place for kids to hang out.

"The blackout ain't gonna stop Broadway from being Broadway," Price said. "They had to build it back and they did."