LOWER MANHATTAN — The MTA has voted to approve plans to extend the M1 bus service further downtown this fall — eventually tacking on an additional 1.5 mile leg to include a route that stretches all the way south to Worth Street, officials announced this week.

The bus route, which currently ends at East 8th Street near Astor Place, will expand in September to go south on Broadway to Grand Street, then loop back north on Centre Street, officials said. Once construction on the Worth Street reconstruction project is completed in late 2018, the bus will continue south to Worth, officials said.

The change, which is estimated to cost an additional $740,000, will only affect every other bus between the hours of 6 a.m. and 8 p.m. on weekdays — and every bus on weekends, the MTA said. The bus serves approximately 11,000 people a day, and travels from 147th Street in Harlem and Astor Place.

It comes as State Sen. Daniel Squadron, whose 26th Senate District covers Lower Manhattan and parts of Brooklyn, argued that people who live downtown have too few bus routes north. The M5 bus route, which was previously one of the city's longest routes and stretched from Washington Heights to South Ferry, was cut into two sections at 38th Street to speed up service in January.

“Extending the M1 downtown is great news for those in Lower Manhattan, and everyone who needs another bus route to get here,” Squadron said in a press release. “The mile and a half south of Washington Square Park have been underserved since 2010, with limited north-south service from 6th Avenue to Bowery.”

A MAP OF THE ROUTE IS BELOW: 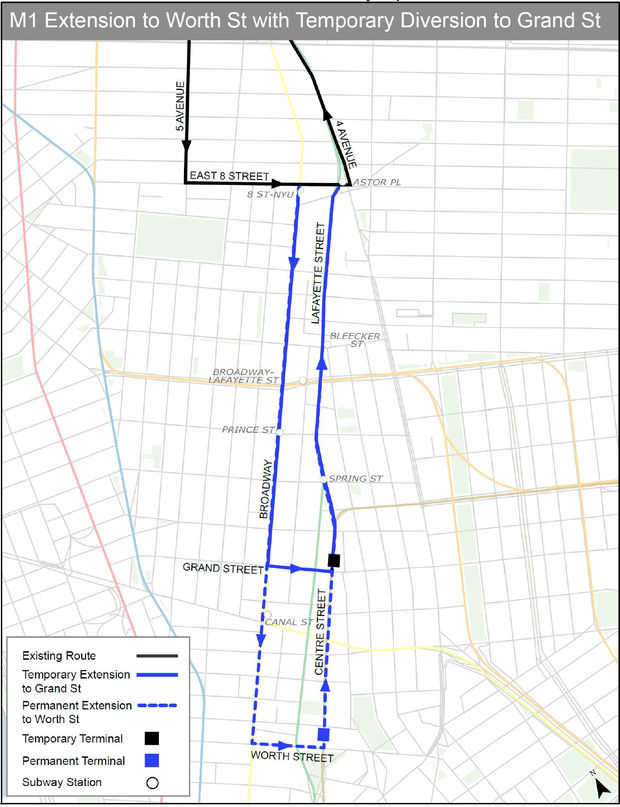