BEDFORD-STUYVESANT — Michael Brown was "a teenager with promise." To Alexandra Bell, that’s all that matters.

For the past several months Bell, a Crown Heights artist, has been hanging posters around Brooklyn criticizing the way newspaper headlines handle issues of race, with her most prolific project singling out the New York Times for its stories about Michael Brown, the black, unarmed teen killed by Ferguson, Missouri Police Officer Darren Wilson.

The stories ran side by side below the fold on the front page of the Times on Aug. 24, 2014. Underneath a headline that read “Two Lives at a Crossroads in Ferguson”, Wilson’s story bore the headline “A Low-Profile Officer with Unsettled Early Days” while Brown’s read “A Teenager Grappling with Problems and Promise.”

The story about Wilson paints a picture of an officer described as a “good” but “nondescript kid” by a former coach, and “well-mannered, relatively soft-spoken, even bland person who seemed, if anything, to seek out a low profile.”

Brown’s story depicted him with a quote that would become a rallying cry at Black Lives Matter protests that roiled cities nationwide following his death: “He was no angel.”

“I can just say ‘the No Angel story’ and people are like ‘oh man, I remember that, yeah’,” Bell said. “That article was infamous.”

But Bell wanted to go beyond the frustrations of readers on a single story and show how the very act of the Times putting the stories of Wilson and Bell side by side was tantamount to measuring the relative value of two lives; a dead teenager whose worst crimes were a cluster of of misdemeanors against a grown man who shot the unarmed teen to death in broad daylight.

Bell said that single "no angel" line threw the value of Brown’s short life into question, and served as an example of how the media's goal of “objective” reporting can lead to unfair portrayals.

“The Mike Brown article always stuck out to me as an extreme example of false equivalency,” she said. “The Darren Wilson stuck out as more considerate and more forgiving, while the Mike Brown article was more like a takedown, like a classic victim blaming. That’s the danger of how we talk about black people in the media.” 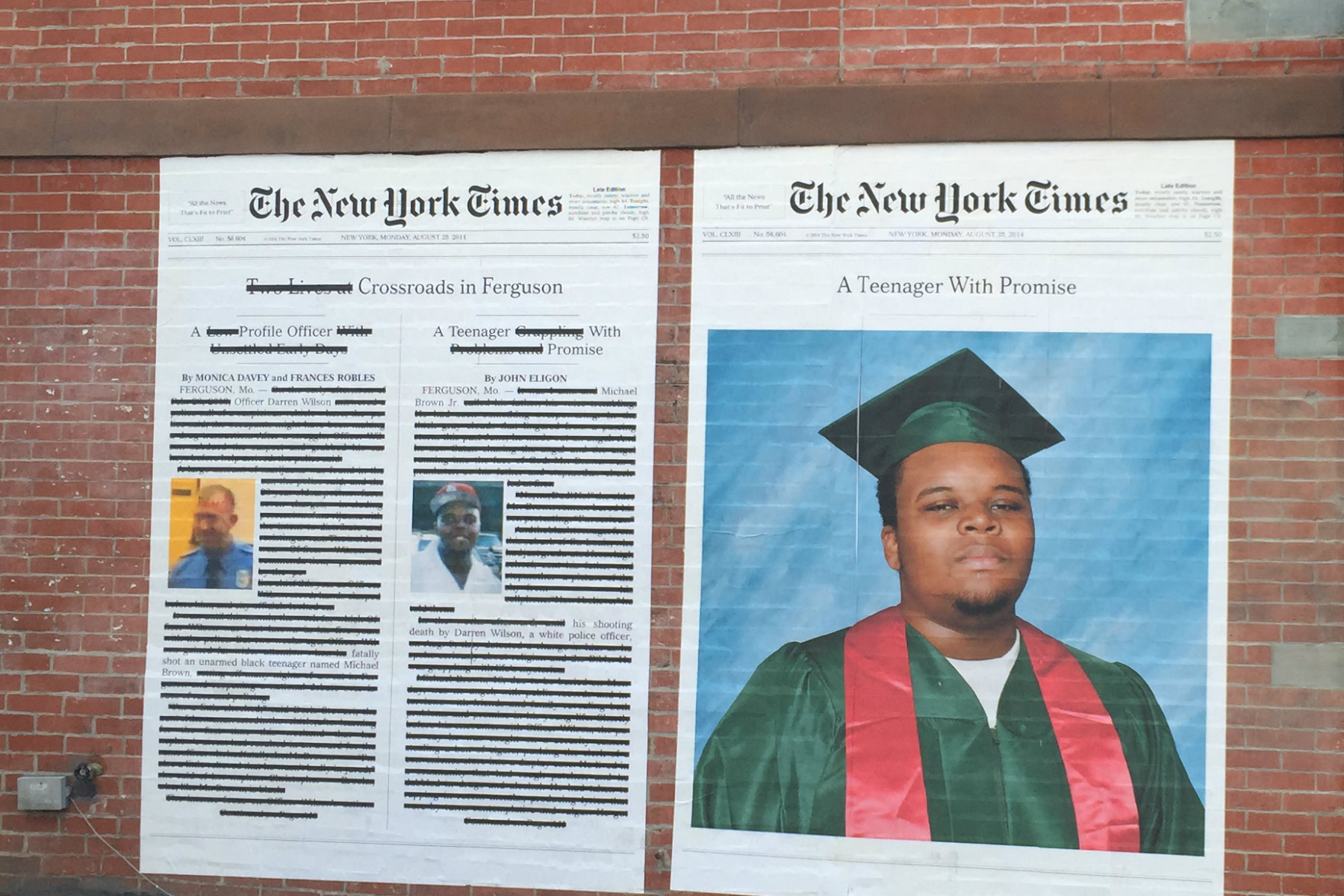 “It’s a kid and a cop, and there’s not a ton left for me to say," she added. "Structurally, the layout was problematic because they’re so different. The layout equalizes them, and you can’t do that. They’re not two 18-year-olds who got in a scuffle.”

More than two years after that story, the headline and story layout continued to gnaw at her, and she began toying with ways to shed light on how it could have been done differently. In November, she shared on her Instagram page a marked up version of the two stories, with key portions crossed out. In her version, the headline read simply “Crossroads in Ferguson.” The sub-headline for Wilson’s story read “Profile Officer”, while the only text she left untouched was “Officer Darren Wilson...fatally shot an [unarmed] black teenager named Michael Brown.”

I've been mulling over this piece for the last week. This is one of several large-scale iterations that will soon make its way beyond IG into the public realm. . In doing this work, I am creating a framework for myself that is often disallowed in traditional journalism--I'm taking sides. I'm using radical edits, #marginalia, and #editorial manipulation within a social justice art framework to highlight oppressive patterns I see in news reportage. . In November 2014, a grand jury decided not to indict Officer Darren Wilson for the murder of Michael Brown. It's been two years, but it still matters. #mikebrown #policeviolence #socialjustice #blacklivesmatter

Since then, she has been on a mission to put up the posters —which she describes as “counternarratives" — around Brooklyn, mostly on construction fences, but occasionally with the permission of business owners, such as one installation on the wall outside the coffee shop Sincerely, Tommy at Tompkins Avenue and Monroe Street.

Bell, who can often be found wearing a button that reads “Very Black” and whose Instagram is dotted with portraits of black American figures like Malcolm X and Frederick Douglass, has mostly been putting up posters related to the Michael Brown and Darren Wilson stories, but she also has a series critical of what she described as the lenient way the Times treated Olympic swimmer Ryan Lochte when he and several teammates were involved in an internationally embarrassing skirmish with Brazilian police during the Summer Olympics in Rio de Janeiro.

A work in progress, but out there nonetheless. . Currently untitled, but my homegirl @tomashi_ashi says I should call it "Performance of innocence". She pulls no punches, FYI. #isshetalkinaboutryanorNYT . #counternarrative #thereifixedit #whitecrimewhitephoto

Bell, whose day job is doing communications for a non-profit, is a 2013 graduate of the Columbia University School of Journalism, and she said her studies there helped inform the beginning of the project, notably the hours she spent marking up stories and doing mock edits in class.

“A lot of that work was looking at how stories were covered across different newspapers so I got in the habit of really marking things up and trying to think about how different papers made me feel,” she said. “It changed the way I thought about the newspaper.”

In an era in which the term “fake news” is bandied about by President Donald Trump and Mayor Bill de Blasio alike, Bell said her goal is not to discount the value of the news in the pieces she critiques, adding that the information may be correct and rich in detail.

Her issue is with the presentation, which she said underscores the ways in which black people and white people are treated with different levels of empathy and skepticism in the media.

“It’s not incorrect journalism,” she said. “It’s the framework that’s troubling. To be frank, I think there’s a tendency — not necessarily conscious — to humanize white people.”

An example of accurate information presented in a way that struck Bell as unfair was a story in August about a man in Tulsa, Oklahoma who fatally shot another man after calling him a "dirty Arab." The headline in the Times was "Tulsa Man, Accused of Harassing Lebanese Family, Charged With Murder." (Online it reads "Oklahoma Man Is Charged With Killing Lebanese-American Neighbor).

Even some of the information that’s sympathetic to Brown doesn’t make the cut in Bell’s revision, because she said the fact that Brown graduated high school has little bearing on whether he should have died.

“There’s actually a paragraph that says he graduated, but I scratched that out because it’s irrelevant to me,” she said. “I think a lot of the portrayals are troubling. There’s stuff about him rapping, or doing drugs or drinking, and I mean that’s what you do when you’re in high school! That doesn’t mean you deserve to die.”