HARLEM — House Speaker Paul Ryan paid a visit to Harlem Success Academy on the heels of his successful push to pass a Republican-backed health care plan that threatens to leave 1 million New Yorkers without coverage — waving to throngs of protesters and hailing the school as "special."

Ryan arrived at the school around 2:30 p.m. — two hours later than his expected arrival — in a black SUV and scurried into the school, but could not avoid the repeated chants of "shame" from a crowd of protesters.

More than 100 protesters gathered to shame Ryan on the healthcare issue, chanting, “How do you sleep at night? Health care is a human right" and “greedy, cruel, selfish, too. Paul Ryan, shame on you.” 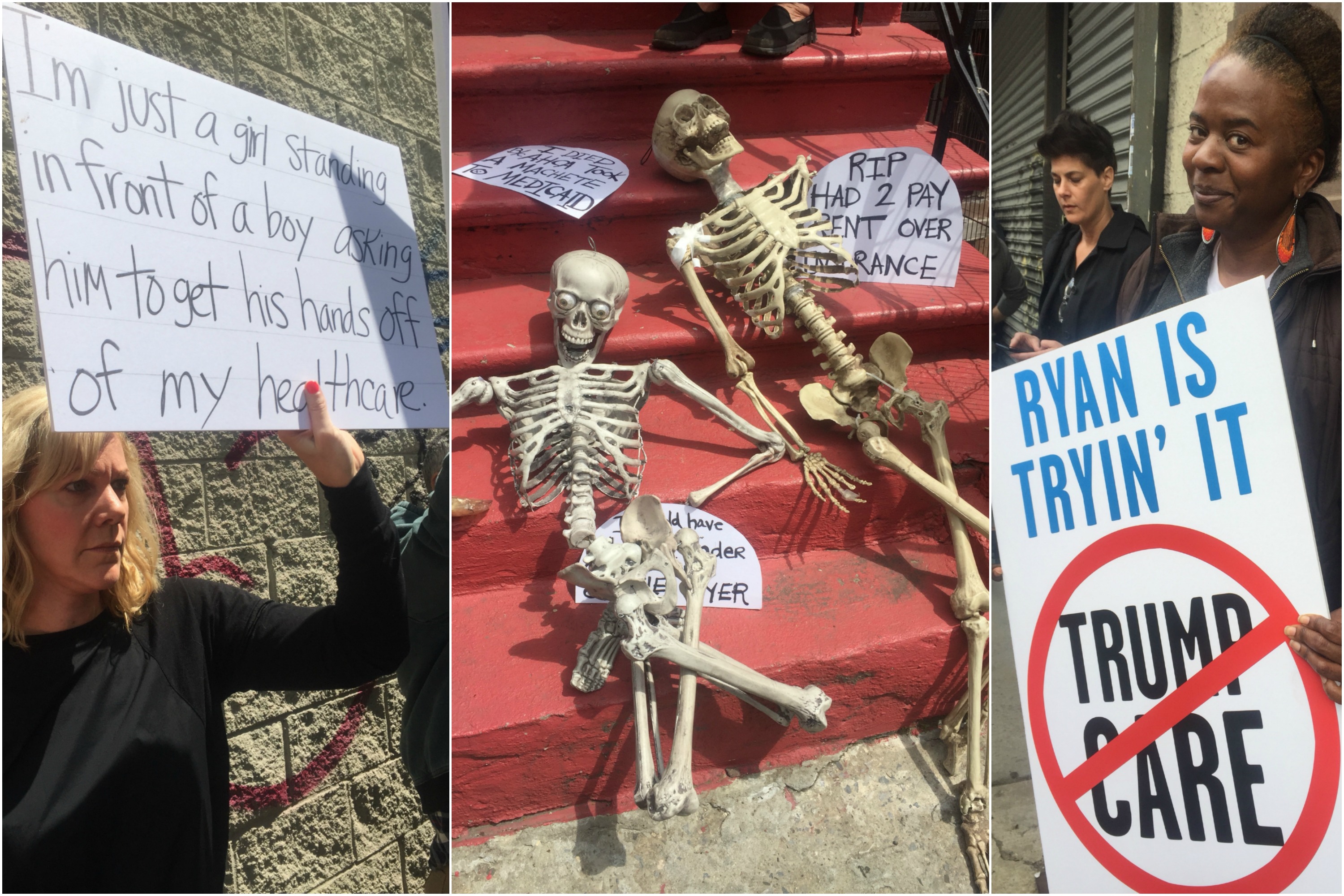 Police had cordoned an area on West 118th Street near Lenox Avenue for the protesters to gather.

A source familiar with the visit said Ryan stopped into a public school classroom, co-located in the same building, before heading on a tour of Success.

Ryan left the school about 45 minutes later, waved to the crowd shouting "shame on you" and quickly got into a black SUV.

Ryan released a statement through a spokesman soon after, calling the visit "special."

"Touring Success Academy, listening to these great kids and their committed teachers, hearing their stories. The quality of teacher training and preparedness was extraordinary," he said."They have a lot to be proud of, and these remarkable kids are getting a great education. That's what matters—giving every kid a fair shot at the American Dream."

Protesters said they turned out to the school on Tuesday to show their disgust with the speaker.

“Since he is the architect of this plan, it’s important to show how much we disagree with this plan,” said Harlem resident Erendira Tristan, 37.

“Not all of us get the chance to go to Washington every weekend to protest.”

Demonstrator and Harlem resident Stacy Parker LeMelle, 42, said she came out to show her frustration.

“It’s like we’re being trolled in the worst way. These are people who have no policy of caring about children," LeMelle said. “It seems like he only cares about the small percentage of Americans — the white, wealthy Christian men. He should be back in his district holding town halls."

Another protester said she was diagnosed with atrial fibrillation at age 22 worried she would not get the coverage she needs under the proposed health care plan, which would allow health insurance companies to restore pre-existing conditions as a basis for more expensive or rejected care.

“Trumpcare is devastating for 1 million New Yorkers, including me,” said Harlem resident Joy Williams. “I still have Obamacare, and I’m at risk.”

Education activists were also a part of the protest, lambasting Ryan for his support of charter schools and criticizing Moskowitz for using the students at Success Academy, the majority of whom are African-American and Latino, as "political pawns."

"She praises Betsy DeVos and now invites Paul Ryan," said Zakiyah Ansari, the advocacy director for the Alliance for Quality education, one of the rally's organizers. "It's insane they have done everything and said everything against the very students she serves."

Moskowitz avoided the crowd of protesters and their chants by slipping in through a side entrance on west 117th Street, where she was met by three protesters, one of whom yelled "coward" as she walked in.

She released a statement in which she promoted "parent choice," and applauded Ryan for touring the school.

“The education crisis in our city and country is profoundly damaging to millions of children, and parent choice has proven to be an effective lever in education reform," Moskowitz wrote.

"Speaker Ryan took the opportunity to see firsthand what is working: the excellent teaching and learning — in science, math, reading, and visual arts — that have placed our schools among the top 2% of all New York State schools. I share Mayor de Blasio’s view (in at least this one case), that open dialogue is essential in finding solutions to our most difficult problems.”