HARLEM— Harry Belafonte remembers being diagnosed as a kid with what we know today as dyslexia, but back then didn't have a name.

He said he was called “unruly” and “inattentive,” and he later dropped out of high school.

However, there was one place where the Harlem native said he found respite: the public library, particularly the one at 203 W. 115th St., near his childhood stomping grounds.

Belafonte's love of the library came full-circle Monday as the city renamed the 115th Street branch after the entertainer and civil-rights icon, marking the first time the library system has renamed a branch in a century, officials said.

“It was the public library system that gave me a chance to read books that I would not have touched otherwise,” Belafonte, 90, said at a dedication event Monday. 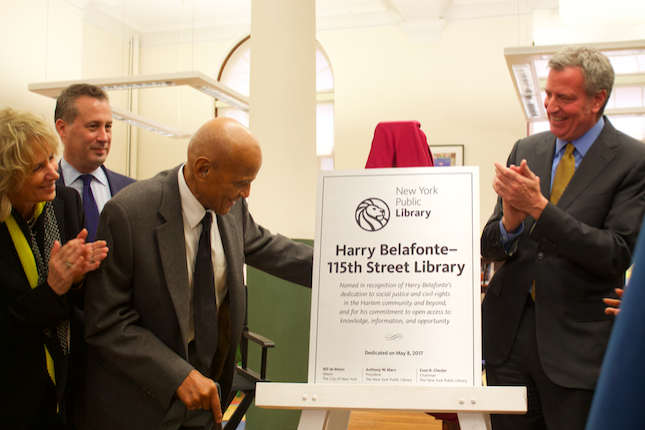 He was born in Harlem in 1927, attended P.S. 186 in Hamilton Heights and George Washington High School in Fort George, and developed his acting chops at the Schomburg Center’s American Negro Theater.

While he is well-known for popularizing Calypso music in the '50s, Belafonte was also one of the leading voices during the Civil Rights Movement.

“Nothing was more central to that journey than the New York Public Library system,” he said Monday. “This library and being in this community shaped my life.”

Mayor Bill de Blasio and other elected officials showered Belafonte with praise for his commitment to social justice and civil rights before unveiling the library’s new name plaque.

“A public library is equated with all of the values and the kind of world he's been trying to create for decades,” de Blasio said. “There’s a reason why so many of us continue to be moved by him… He is no less urgent than he was in the ‘50s and ‘60s.”