HARLEM — Alvin Irby was working as a first-grade teacher in The Bronx about a decade ago when he noticed one of his students stroll into a local barbershop.

The student sat down, doing nothing as he waited for his cut.

The 32-year-old knew his students' reading skills, and this boy was not doing well in class.

“I was a just thinking at the time that he should be practicing his reading right now,” Irby recalled.

That’s when the seed for Barbershop Books was planted.

The nonprofit, founded in 2013, targets African-American boys ages 4 to 8 by leveraging the cultural significance of barbershops in the black community to introduce them to books at an early age.

Using a “male-centered” space such as a barbershop helps create a “black male reading model” for the kids to “cultivate reading identities,” Irby explained. 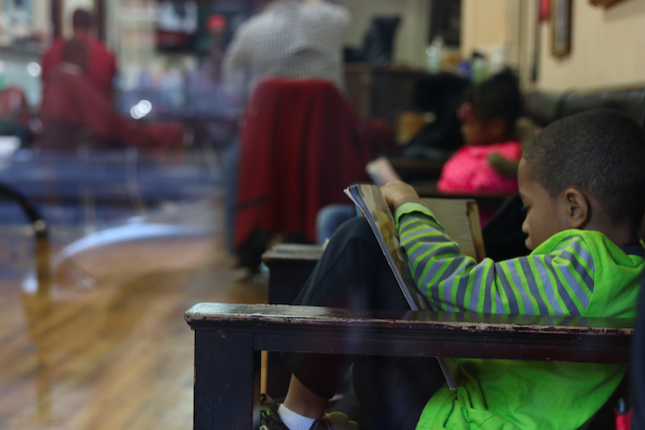 The Harlem resident, who is originally from Little Rock, Arkansas, said the mission of the organization is not about tracking performance or improving proficiency rates, but to make reading fun and enjoyable for young black boys.

“Far too many children associate reading with school or homework or an assignment, and as soon as school gets out they don’t touch a book,” he said. “And Barbershop Books is working to change that.”

Currently, the nonprofit counts 50 barbershops across the country participating in the program, with 10 in Harlem, one in The Bronx, one in Brooklyn and 20 more across 20 other cities.

The program, a subset of his nonprofit The Reading Holiday Project, was recently awarded the Innovations in Reading Prize from the National Book Foundation, which said the initiative showed “how a simple idea can have a profound impact.”

The prize comes with a $10,000 grant, which Irby said he will use to expand the program, specifically to launch 10 sites in his Arkansas hometown.

Irby, who also works as a comedian, will use his standup chops to fundraise for the program at the Fresh Fade Comedy Show on May 5.

“There are some entrepreneurs who are working on their idea and have their parent paying their rent,” he said. “I don’t have the luxury of depending on anyone paying my rent.

Community members can visit the organization’s site, recommend a barbershop in their area, donate $175 and the organization will ship a colorful bookshelf with stacks of pre-selected children’s books.

“It costs less than a pair of Jordans, and someone can create a permanent reading space in a barbershop,” he said, “and it’s tax-deductible.”

The program curates its list of books, many of which are selected by young black boys and Irby himself, who also has two masters degrees in education.

Many of the books also feature main characters who are black, which Irby said was done on purpose.

The books similar to Irby's self-published "Gross Greg," about a young black boy who likes to eat his boogers.

He said he was tired of seeing "oppressive narratives" related to slavery or the Civil Rights Movement, instead of simpler books with the focus on black children just being kids.

“Why not write a book about boogers? Isn’t that something that children do? Doesn’t a black boy deserve to see themselves as a child?"

Best Getaways For New Yorkers Without a Car