Residents are invited to give feedback and ask questions about the proposal, a DOT spokeswoman said, which would install the lanes between Boerum Hill and Bay Ridge.

The new lanes are eagerly anticipated by cyclists who want safer riding routes between north and south Brooklyn. Advocates have launched a petition and social media campaign to tell DOT they support the proposal.

Cycling activists with Transportation Alternatives hosted an April 22 group ride on Fourth Avenue to raise awareness about the proposal and collect support from businesses along the route.

Activist William Farrell said talking to business owners was a key step because they hold a lot of sway at community meetings.

"A lot of times people speak on behalf of business owners saying they’re not going to like [bike lanes]," Farrell said. "We think there’s a lot of evidence that shows that [bike lanes] really help businesses. When you make a street safer and make it a place people want to be and walk and bike, that’s a place where people also want to spend their time and shop."

Business owners have resisted plans for protected bike lanes in other parts of the city, saying they make it too hard to load and unload merchandise at the curb, among other complaints.

But safe streets advocates say the protected lanes on Fourth Avenue are a crucial step in the city's Vision Zero initiative to slash pedestrian deaths.

The city has been working for years on safety and aesthetic upgrades on the busy avenue, but those plans didn't originally include bike lanes. In March, the DOT announced a proposal to add bike lanes to the list of improvements it wants to make on the avenue.

The lanes would run for four miles each way on the east side and west side of Fourth Avenue between Dean Street and 65th Street. Similar to the protected bike path on Prospect Park West, the lanes would have a row of parked cars acting as a buffer between cyclists and traffic. 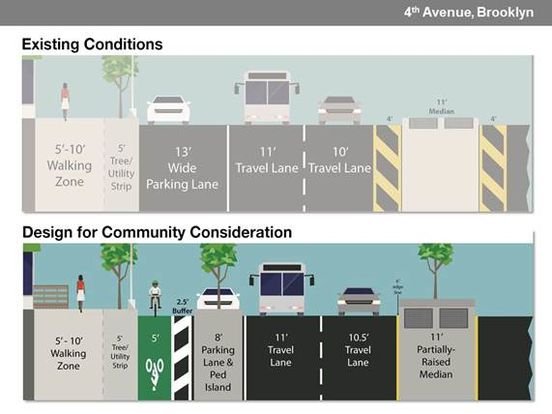 The proposal to add protected lanes on Fourth Avenue is part of the city's ongoing Vision Zero initiative to reduce pedestrian deaths through a combination of physical upgrades and police enforcement.