Sludgie the Whale Visited the Gowanus Canal 10 Years Ago Today

By Leslie Albrecht |&nbspApril 17, 2017 8:44am
@ReporterLeslie
Twitter Facebook Email More
The body of Sludgie the Whale, the baby whale that wandered into the Gowanus Canal in 2007.
View Full Caption
Joy Reidenberg

GOWANUS — Sludgie, your death was not in vain.

It was exactly 10 years ago today that a 15-foot minke whale took an ill-fated detour to the mouth of the contaminated Gowanus Canal. Though her visit lasted just 24 hours, it left a lasting and positive legacy that continues to this day.

Nicknamed Sludgie the Whale — a pollution-themed play on Carvel's Fudgie the Whale ice cream treat — the wayward sea creature "captivated the city" and provided a much-needed distraction from news of the Virginia Tech shooting massacre the day before, according to press reports.

Even Mayor Michael Bloomberg weighed in, telling reporters, "My thoughts are with the whale."

A decade later, we can thank Sludgie (in part) for a cleaner canal and a deeper understanding of marine life, said canal advocates and scientists.

"[T]he conflicting images of vibrant wildlife and the murky, fetid waters of the Gowanus forced a wider swath of the community to see the need for a cleanup," said Sean Gannet, a filmmaker who organized a 2013 TedX Gowanus conference where Sludgie's skull was displayed.

"[I]t stirred our imaginations about what life could be like with a vibrant and clean canal," Gannet said.

Andrea Parker, executive director of the nonprofit Gowanus Canal Conservancy, called Sludgie a "super-powerful icon" that helped bring attention to the disgusting state of the canal.

Indeed, Sludgie went on to become an icon, literally.

Locals used the whale's likeness two years later in a logo for their Superfund Me campaign. The whale worked — the effort helped convince the U.S. Environmental Protection Agency to launch a Superfund cleanup that's just now getting started and will eventually lead to a more hospitable canal for both humans and animals.

It's still not known how or why Sludgie strayed from her native ocean habitat to the polluted canal. Some speculated then that the whale was following krill or another food source. Some thought she may have been pushed off her usual path by a Nor'easter. 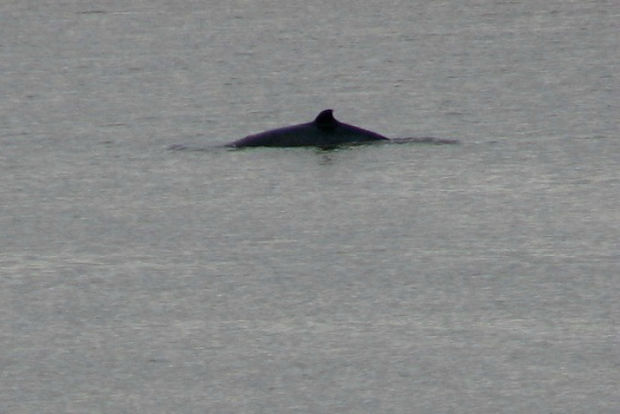 Sludgie near the Gowanus Canal, as seen from the roof of the Home Depot on Third Avenue and 19th Street, on April 18, 2007. Photo: Amy Langfield.

At first, the majestic marine mammal, which tipped the scales at about 5,000 pounds, appeared to be healthy. It even jumped out of the water and spouted from its blowhole. "The last time I saw anything like that was at SeaWorld," a dockworker from Queens told the Daily News. "You never see a whale in Brooklyn." 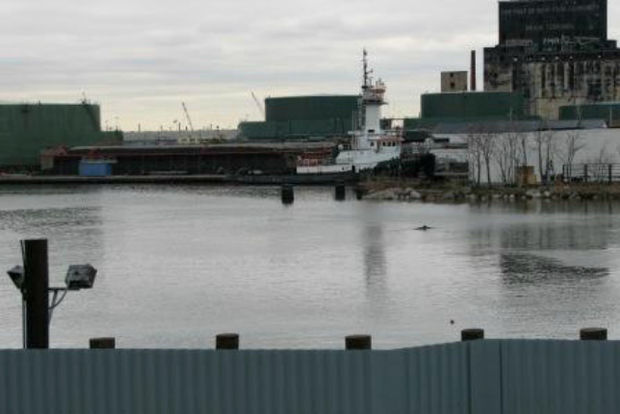 Sludgie the Whale near the Gowanus Canal on April 18, 2007. Photo: Amy Langfield

Sludgie "frolicked" at the mouth of the canal where it connects to Gowanus Bay, near the Hamilton Avenue bridge, but the animal was close enough to the stinky heart of the canal that many worried the pollution would harm her. The timing couldn't have been worse, wrote local blogger Bob Guskind then, because recent storms had probably filled the canal with raw sewage, a problem that plagues the canal to this day.

"The fact that we still tolerate rivers of sewage flowing right into the Gowanus during rainstorms — and that the pollution goes right into New York Harbor and eventually into the Atlantic — is as astounding as a whale showing up in the Gowanus Bay, but that is a different issue," Guskind wrote in an observation that still rings true.

Marine animal experts hoped to lure Sludgie away from the mouth of the canal and back to the ocean using noises or small boats, but they never got the chance. Just before 5 p.m. on April 18, Sludgie thrashed around in the water and then died near a Hess Oil pier on 21st Street in Sunset Park.

Despite the public's fears, the dirty water didn't kill Sludgie, scientists later learned. Sludgie wasn't in the polluted waters long enough to be harmed by the toxins, said comparative anatomist Joy Reidenberg in a video interview shot for the 2013 TedX Gowanus conference.

A necropsy revealed that the whale was just a baby, hardly a year old, and probably still nursing, Reidenberg said. Sludgie still needed her mother, but the two had apparently been separated, and the young whale wasn't eating enough, which likely hastened her death, Reidenberg said.

While the exact cause of Sludgie's death isn't known, the whale's body was skinny, and all of her stomach chambers were empty, Reidenberg said, which meant Sludgie was in a "weakened condition" that led to her become stranded, Reidenberg said.

"The story of Sludgie is a tragedy because it was a baby animal that died way before her time," Riedenberg said in the video. "But there was a silver lining ... because we were able to get so much scientific information from Sludgie's body. … Sludgie did contribute to a much greater scientific purpose and for that we are very thankful."

Sludgie wasn't the first or the last animal to swim into the canal, of course. The waterway — sullied by decades of industrial dumping and laced with cancer-causing PCBs and gonorrhea — has also hosted a seal, an environmental activist, a dolphin, a muskrat, and, in 1928, a sperm whale that was wrestled to death by some unemployed ironworkers.

The increase is partly due to protection efforts that have helped some formerly endangered species grow in numbers, like the humpback whale that washed up in Rockaway earlier this month, DiGiovanni said.

If you see a wayward whale, don't just post about it on social media, notify the proper authorities. DiGiovanni's Atlantic Marine Conservation Society maintains a hotline and the public can submit tips online too. "What we want to encourage is the public to actually become part of our understanding of what’s going on in their backyard and to work with us," DiGiovanni said. "Hopefully we can open up a dialog that will lead to a better environment for these animals and more awareness that they’re here."