GOWANUS — The "privy queen of New York" led a treasure hunt at the Gowanus Houses this week.

Her highness is actually urban archaeologist Joan Geismar, who earned her nickname because she's spent much of her career digging up centuries-old privies — outhouses — in search of clues about the city's past.

On Wednesday afternoon Geismar stood in a 4-foot hole at NYCHA's Gowanus Houses plucking old bricks and pieces of plates out of the soil. Time had turned the long-ago trash into a possible treasure for Geismar, whose maiden New York City dig in 1982 uncovered a 100-foot 18th century ship beneath Water Street in Lower Manhattan.

NYCHA hired Geismar to make sure upcoming construction of FEMA-funded flood resiliency upgrades at the Gowanus Houses won't disturb any archaeologically significant remains, a requirement for federally funded projects. If it's impossible to avoid disturbing historic artifacts, Geismar must document any significant remains before they're destroyed.

The Gowanus Houses are in a historically rich section of Brooklyn not far from where some history buffs think the Revolutionary War's Maryland 400 may be buried. Locals have been known to find cannonballs in their backyards not far away.

It's also possible there are Native American artifacts buried deep beneath the ground there, according to Geismar's analysis. 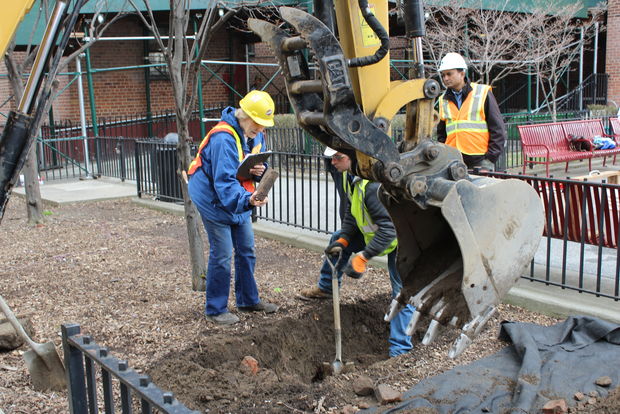 On Wednesday, after several hours of digging, it was still unclear whether the dirt beneath the Gowanus Houses held any blockbuster finds. A crew with a mini excavator and shovels unearthed a curved stone wall — perhaps part of a privy — that Geismar classified later as a "known unknown," meaning that she couldn't immediately determine its significance.

Geismar's digging also uncovered several shards of ceramic dishes, bits of smoking pipes and a piece of what was probably a container of Musterole, an ointment popular in the early 20th century, she explained.

Despite the mundane discoveries, Geismar never wavered in her enthusiasm.

"The act of discovery is very exciting," she said in between dispensing fun historical facts to NYCHA staffers gathered around her dig site. "Every privy has its own character and it tells you something about life." 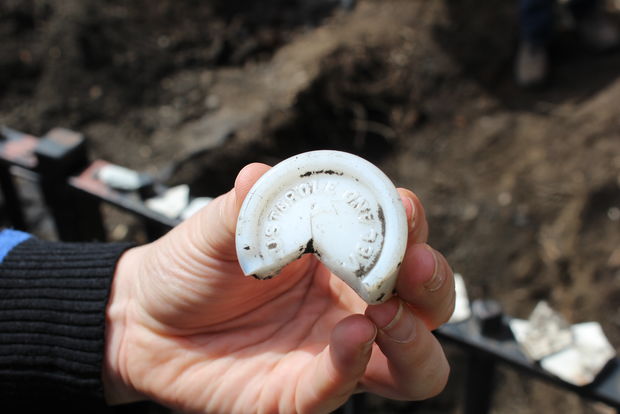 A fragment of a ceramic container found during an archaeological dig at the Gowanus Houses. (Credit: DNAinfo/Leslie Albrecht)

Built in 1948, the Gowanus Houses sit just two blocks from the Gowanus Canal and they sustained serious flooding and damage during Sandy. Water was also a chief feature in the local landscape almost two centuries before that, Geismar said. Back in the 1830s, the land where the Gowanus Houses sits was marshy and full of streams, according to Geismar's research. Someone — she doesn't know who — filled in the land so it could be developed.

Small houses that were home to working-class families sprung up in the area in the 1830s and '40s, Geismar said. Masons, brick dealers, stone cutters, cabinet makers and the like lived in them, according to a census Geismar found in her research.

In a parallel to today's hot real estate market in Gowanus, the area drew the attention of speculators, including Alexander Hamilton, Jr., the son of the Founding Father, and Richard Carman, who founded the village of Carmanville in what's now Washington Heights, Geismar said.

"What's so interesting to me is that this wet, wet place became an area of speculation in the 1830s," Geismar told DNAinfo New York. "You wouldn’t think that, but I guess land may have been relatively inexpensive and people  got the idea that things were happening, so they made it happen even more. History, when they say it repeats itself, it really does."