Mobile Showers for Homeless up for Taxpayer Funding in Park Slope

PARK SLOPE — Hungry homeless people could soon get both hot meals and hot showers at a Fourth Avenue soup kitchen.

A proposal to install a mobile shower trailer outside the nonprofit CHiPS on Fourth Avenue and Sackett Street is up for funding under City Councilman Brad Lander's participatory budgeting program this year.

"We really love this project," said CHiPS executive assistant Andi Hinnenkamp. "It's definitely a form of dignity for someone to be able to clean themselves up and take care of themselves." 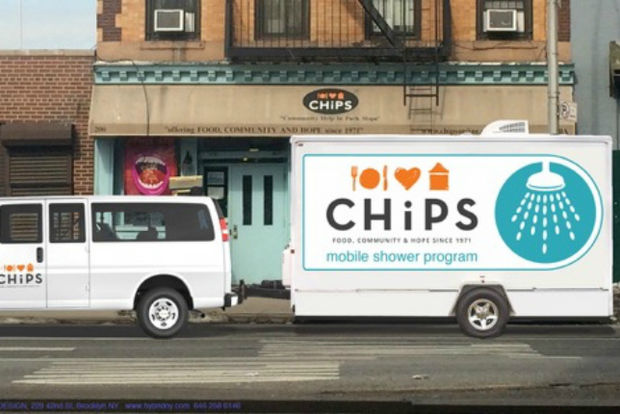 A rendering of what mobile showers for the homeless would look like outside CHiPS. Image: CHiPS

CHiPS, founded in 1971, serves breakfast and lunch to roughly 150 to 200 people a day. The mobile shower trailer would cost $59,560. It would hold two separate shower stalls and would park outside CHiPS to provide hot showers before and after lunch five days a week.

It's one of 19 proposals up for funding on Lander's participatory budgeting ballot this year. The citizen-led budgeting initiative lets residents of Lander's 39th District decide how to spend $1,550,000 of Lander's discretionary funds on neighborhood upgrades.

In past years the program has paid for a storytelling garden at the Park Slope public library with a "Knuffle Bunny" statue, bathroom renovations at P.S. 124 and freeze-resistant water fountains in Prospect Park.

Locals come up with the project ideas themselves at a series of public meetings, then volunteers winnow the list down to a final set of proposals that are put on a ballot. From March 25 through April 2, residents as young as 14 can vote either in person or online for the projects that they want to see funded.

You don't have to be a registered voter to cast a ballot in participatory budgeting.

► $400,000 to renovate the dog run in Washington Park near J.J. Byrne Playground on Fifth Avenue and Third Street in Park Slope.

► $250,000 to restore service to the water fountain in Thomas Cuite Park on 11th Avenue and 19th Street in Windsor Terrace, the "only water fountain in [a] playground loved by locals and used heavily by 500 preschoolers from P.S. K280," according to the ballot.

► $5,000 to train community members how to respond to harassment and hate crimes.

► $7,500 for artists to visit Alzheimer's patients and their caregivers weekly in Cobble Hill.

See all the project proposals and vote for your favorites here.

RELATED: Have a Say in How to Spend $2M in City Funds for Sunset Park and Red Hook