By Aidan Gardiner |&nbspMarch 14, 2017 7:51am | Updated on March 14, 2017 8:37am
@aidangardiner
Twitter Facebook Email More
Forecasters had initially predicted up to 20 inches of snow would hit the city.
View Full Caption
DNAinfo/Heather Holland

NEW YORK CITY — As an icy storm battered the city Tuesday morning, forecasters revised their snow estimates to 8 inches at the highest — down from the 20 they'd previously predicted — and lifted a blizzard warning that had been in effect.

Still, officials warned New Yorkers to remain cautious — as the governor declared a state of emergency, all above-ground subway service was suspended and the city issued a hazardous travel advisory for Tuesday morning.

"New Yorkers should prepare for snow and dangerous road conditions," Mayor Bill de Blasio said. "Besides the snow, it will be cold. We urge you to avoid unnecessary travel and help keep roads clear for sanitation crews and first responders."

By 11 a.m., Queens Village had measured the most snow in the city with 7 inches, while Central Park saw 4 inches, according to the National Weather Service.

The worst of the snow is expected to drop in the northern parts of the city including Manhattan and The Bronx, while areas south and east could see a freezing rain mix.

Snowfall in those southeast areas will likely be significantly less than originally predicted — about 4 inches, according to a National Weather Service spokesman.

Officials lifted a blizzard warning Tuesday morning that had been issued the day before.

Meanwhile, winds were still expected to gust up to 55 mph throughout the day, forecasters said.

The worst of the storm should taper off by the afternoon with light snowfall continuing up until nightfall, Murray said.

"This afternoon will be light and not amount to much," Murray said.

Around the city though, as snow and wind whipped through, New Yorkers braved the elements to say: It's not so bad.

Nick Costuri, 57, was pushing a snow blower along the sidewalk outside his Briarwood building.

"It's really not that bad. It took me an hour to clean the entire sidewalk in front of the building. Maybe it's going to get worse later, but as of now, it's not a big deal," Costuri said. 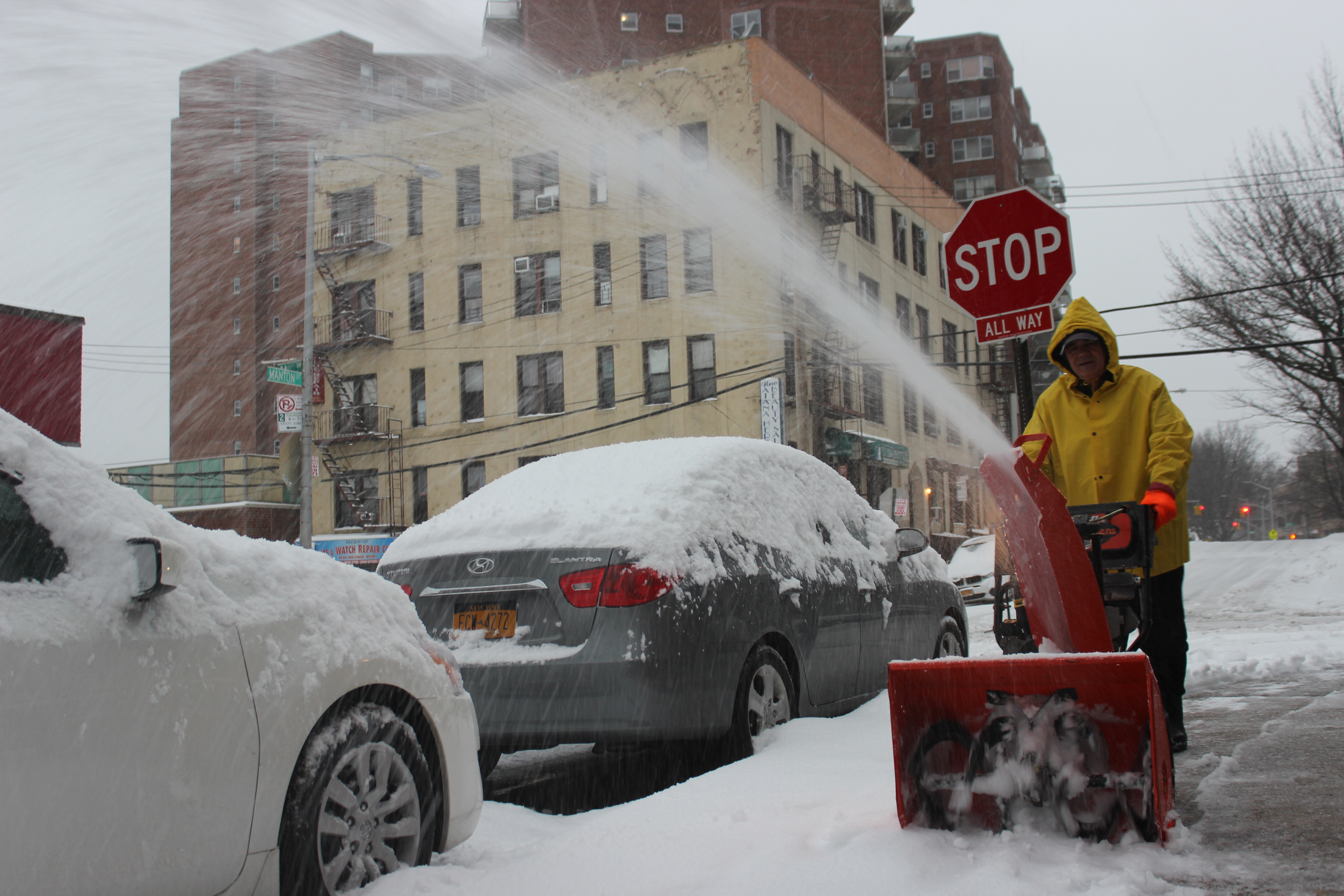 Galina Lestina, 30, insisted on heading in to work Tuesday morning because she works at NYU Langone and is used to much worse, she said.

"I'm from Russia and we have this weather all the time. A lot of my colleagues took a day off today, but I didn't want to do that," Lestina said.