The library, located at 224 E. 125th St., has been in operation since 1904 and is one of the five original Carnegie libraries in the NYPL system.

“We have issues: Code compliance, the façade needs help, the HVAC, the bathrooms need help and there’s no elevator,” said Tony Marx, president of New York Public Library, at a press conference at the branch Thursday.

Aside from adding an elevator and performing general restoration of the library's walls and facade, library officials will rely on community feedback to decide what else to direct the funds.

Currently, it is difficult for people will disabilities to access the upper floors of the library, said branch librarian Velma Morton. 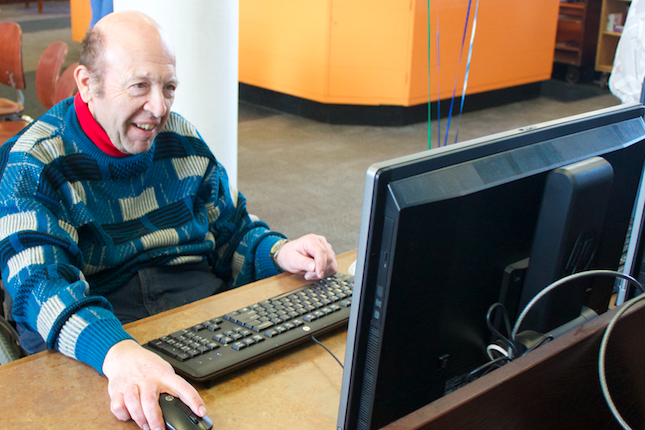 East Harlem resident Tony Palmieri, 63, said the branch taught him how to use a computer, but it is difficult for him to access the upper floors because he is disabled. (DNAinfo/Dartunorro Clark)

Morton noted that the renovation “means a lot for this deserving neighborhood” as more people visit the branch. Last year, it saw 100,000 visits and a 90 percent increase in program attendance, officials said.

Officials also plan to transform an apartment on the third floor of the branch — a relic from a bygone era when libraries had live-in custodians — into use for the community.

To assess community needs, the NYPL will host meetings over the next year, as well as offering a survey that can be completed online or at the branch.

Construction will begin in 2018 and the branch is slated to reopen in 2020. The city selected architecture firm Cannon Designs to assist in the renovations.

In the interim, neighboring branches will serve as temporary sites featuring longer hours and additional resources and staff to handle the overflow, officials said.