Quarter of All NYC Public School Classrooms Have No Air Conditioning: Study

MANHATTAN — One out of every four classrooms in NYC public schools have no air conditioning — making it too hot to learn in the summer months, according to a report released Tuesday by Park Slope City Councilman Brad Lander.

As the weather each year gets warmer and warmer, the lack of A/C in nearly 11,000 classrooms in more than 1,000 city public schools has posed a bigger problem for teachers and students, and will become even more problematic since the Department of Education lacks a plan to fix the issue, according to the “Too Hot to Learn!” report.

The DOE had no A/C installations underway and only earmarked six school buildings for electrical upgrades to allow for A/C units as of January 2017, the report said, citing data from the School Construction Authority.

“In over 10,000 NYC public classrooms, on too many days, it is simply too hot to learn in,” Lander said in a statement. “When the thermometer rises into the 80s and 90s, students become lethargic, dehydrated, and unable to focus. Students with asthma can’t even safely attend. How can we expect teachers to teach, or students to learn? We must do better for our kids.” 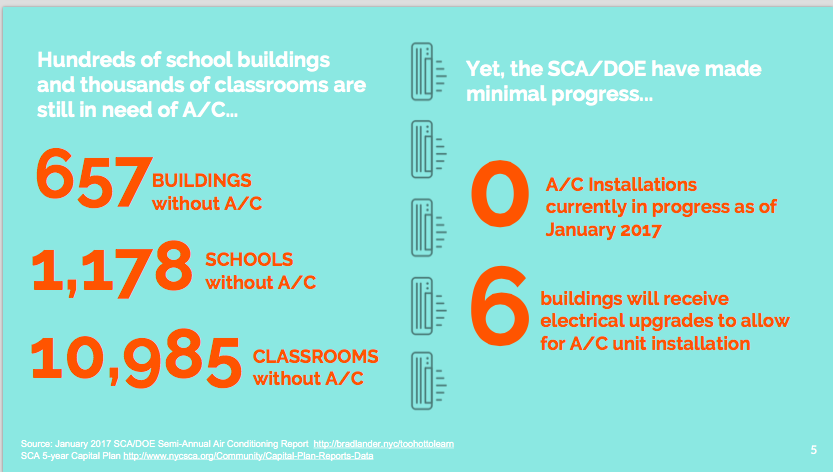 From the Too Hot To Learn report.

City Council passed legislation last June requiring the DOE and SCA to produce reports outlining which schools needed air conditioning, but the education department refused to provide a detailed summary of school rooms that did or did not have air conditioning when releasing the data in October 2016.

The DOE data simply showed that vast majority of buildings — some 78 percent — had "partial" air conditioning, which could mean a school had just a few classrooms with A/C.

Because of the incomplete information, Lander and his colleagues on the council reached out to parents and educators, between October and December last year, to find out how many rooms in their schools lacked air conditioning and to hear about the impacts of having hot classrooms. They received responses from roughly 450 people representing nearly 100 schools across the city.

Survey respondents included a middle school teacher in the Bronx whose student who needed to be carried down five flights of stairs to the nurse’s office because of the heat. A physical education teacher at a Brooklyn middle schools said that students get sick from being overheated in the gym and miss out on being active because of the hot temperatures. A Bronx elementary school administrator said when the cafeteria is too hot, students don’t eat their lunch — and fights increase, too.

► Here's Why Schools Have a Hard Time Getting Classrooms Air Conditioned

Updated information from the DOE and SCA in January provided more classroom-level data, revealing, for instance, that the majority of hot classrooms were in Queens, with roughly 4,000 rooms with no air conditioners, and Brooklyn, with more than 3,400 classrooms without A/C. It also showed that nearly 340 classrooms had A/C units that didn’t work.

The data, however, lacked information on whether school public areas like auditoriums, cafeterias, gyms, libraries and nurses’ offices had A/Cs.

According to Lander’s survey, 95 percent of respondents said that those shared spaces lacked air conditioning.

Lander and other council members called on the DOE to provide a 5-year plan to air condition every school and assess buildings’ needs for electrical upgrades.

Many schools have insufficient wiring to power A/C units, the report notes, which results in power outages or blown fuses.

In addition, even when the wiring exists, schools are still denied A/Cs by the city, Lander found.

At one Queens school, the DOE refused to allow air conditioners to be installed — despite the fact that the building was wired for it — because they didn't want to pay the added electrical costs, according to a principal who asked to remain anonymous.

The Council would also like a $100 million initial capital investment for electrical upgrades and $25 million in expense funds, over 5 years, dedicated to buying A/C window units for the classrooms that need them.

Under DOE budget rules, the city’s capital funds can pay to wire schools for air conditioning, but schools themselves must use their own operating funds to purchase the units.

Cash-strapped schools then have to make the impossible choice between spending on teachers and textbooks — or on air conditioning. It then becomes an issue of equity: schools with wealthy student bodies often have their PTAs fundraise for A/C units, when the wiring allows for it, while low-income schools are unable to have similar campaigns.

DOE officials said they are dedicated to providing students with a safe and comfortable learning environment in every school building. They added that approximately 95 percent of school buildings have air conditioning in some or all of the instructional spaces.