LOWER MANHATTAN —  Be cool, New York City — "hipster cop" is about to retire.

Det. Rick Lee, arguably the NYPD's nattiest dresser — and most memed plainclothes officer — is turning in his badge Friday, after 25 years on the job.

Though long a fashion aficionado, Lee's clipped skinny ties, fitted pants and vintage-inspired glasses made him a bona fide internet sensation in 2011, when Occupy Wall Street took over Zuccotti Park. Lee, a community affairs detective, became as much a fixture on the scene as many of the protesters.

"Not to put down my brethren, but cops aren't exactly known for dressing well," Lee said with a laugh. "I knew that I didn't dress like a typical cop, so I guess I stood out."

Photos of Lee, with his sideswept blonde hair and decidedly un-police-like look, earned him the "hipster cop" moniker, along with articles in The New York Times, and in his favorite magazine growing up, GQ, — as well as, of course, all those memes, which still circulate the Twitterverse.

#hipstercop
To my fellow LEO's, what's your favorite obscure charge to write? pic.twitter.com/WcVKKFy6ei

Lee, who still looks younger than his age, now almost 51, said he found all the attention curious and unexpected, but looking back, he says, "You know, it was a tough situation down there, and I think it gave us all some levity."

As a community affairs detective in Manhattan's 1st Precinct for nearly 17 years, it's been Lee's job to serve as the liaison between the NYPD and local residents and businesses in the neighborhoods — including rather fashionable TriBeCa and SoHo — that they serve.

His interest in fashion or "looking put-together," as he says, is something that predated his time with the NYPD, but has helped in his job (aside from the occasional "getting his chops busted" by fellow officers).

"No one ever gets that I’m a cop, and I think that's OK," said Lee, who still lives in Shore Acres, the Staten Island neighborhood he grew up in. "[My style] breaks down a lot of walls, and I think I'm able to put people at ease, and that's part of what I do." 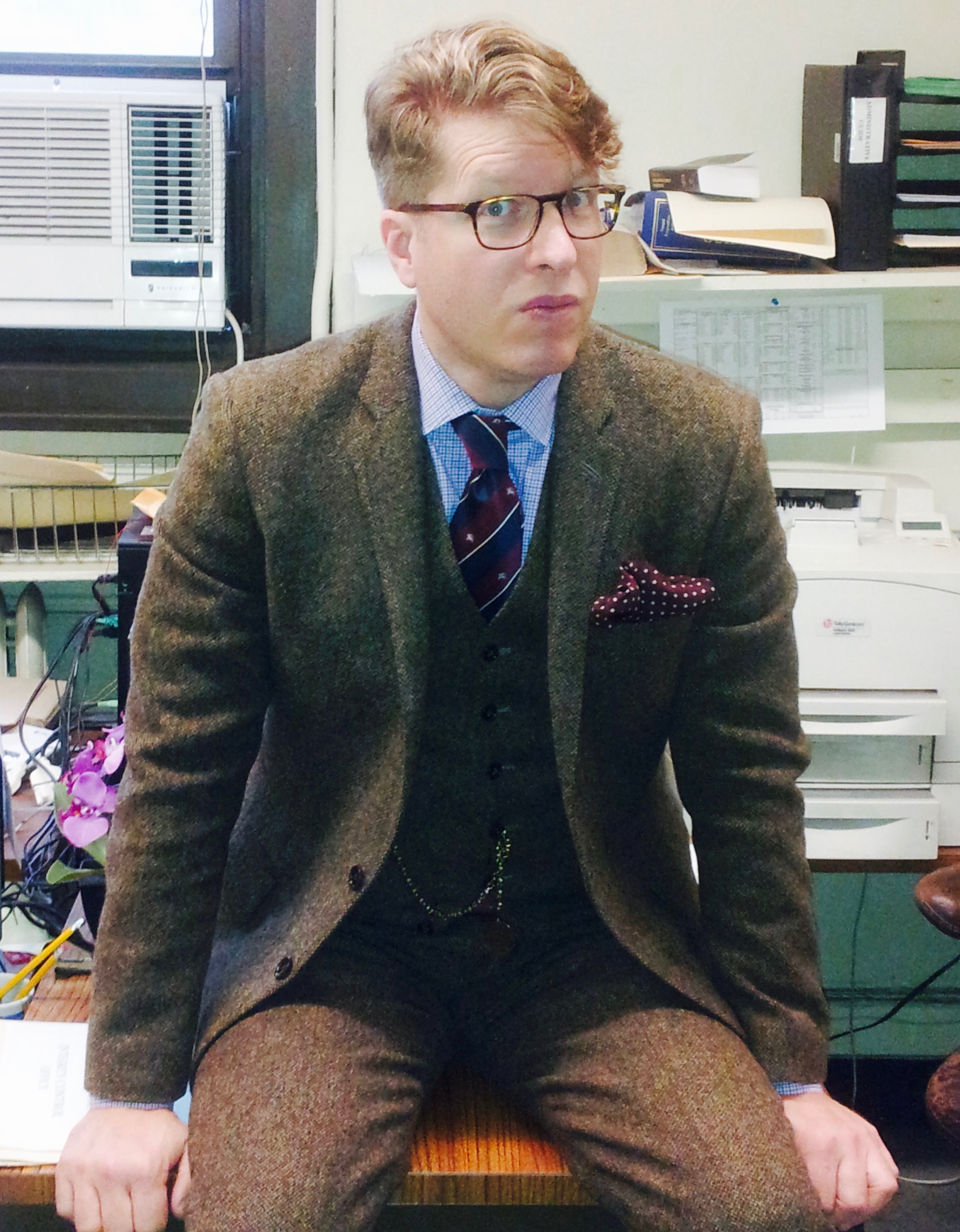 Detective Rick Lee, in one of his favorite tweed suits, sits on a desk in the 1st Precinct. (Courtesy of Rick Lee)

Though Lee's sartorial choices ended up suiting his career, and the precinct that he serves, his path to the NYPD and the 1st Precinct "just kind of happened," he said.

Lee worked as a carpenter for several years before finally deciding to join the NYPD when he was 25, at the urging of his dad, a retired firefighter.

He started as a transit officer Downtown, then became a patrolman in the 1st Precinct, mostly covering the Financial District. After about eight years, at the suggestion of his commanding officer, he moved on to community affairs.

"I was ready for the change, and I do think I had the right temperament for the job," Lee said. "And, after eight years, putting on that uniform everyday does sort of start to wear on you."

In perhaps his most hipster-y assessment of his plainclothes move, he added: "It may sound funny, but I kind of had a problem with authority."

As his wardrobe evolved, so did Lower Manhattan, and his role with 1st Precinct.

"There's been so much change Downtown — this has become a very safe, residential area, " Lee said. "That's not something I would have said more than 20 years ago."

Of course, the transformation of Lower Manhattan is also the story of a comeback, after the devastation of 9/11.

In the wake of the attacks, when much of Downtown was closed off, even to residents and business owners, Lee felt they needed a better way to connect with the community, so he started the precinct's first community council meetings — something the precinct continues to host every month.

Lee has also been instrumental in helping to coordinate the growth and security for the Tribeca Film Festival, as well as Fashion Week events Downtown, and the many trendy pop-ups that keep popping up — something his precinct remains proud of, 1st Precinct commanding officer Mark Iocco told DNAinfo New York.

As for that "hipster" label accurately describing him, Lee says in some ways it does.

"I'm not a bearded guy that lives in Williamsburg, I'm a 50-year-old man who likes J.Crew, Burberry and Brooks Brothers — but in the original sense, that a hipster is someone who doesn't conform to the norms, I think it does describe me — and yes, I do wear skinny jeans."

As for his retirement, Lee says, for now, he's mostly interested in enjoying his new down time with his Shetland Sheepdog, Bertie, and his nieces — and traveling for the first time to Europe and California.

He doesn't have plans to pursue fashion, but, "hey," he says, "I'm open if someone wants to hire me."

But he also already knows he'll "miss the job terribly" — and the 1st Precinct will miss its "legendary" hipster cop too, its commanding officer Deputy Inspector Mark Iocco said.