Cynthia Williams graduated from Hunter College in January at age 74 as the oldest member of her class and the oldest student in her master's program in rehabilitation counseling.

Williams felt everything but her age when Hunter College President Jennifer Raab recounted her life story at the school's commencement ceremony last month, a tale of addiction, homelessness, recovery and success that drew cheers from the audience.

Admiring classmates later called Williams a "vision of hope," she said. One student hugged her so tightly she almost keeled over.

'You don’t find too many people at 74 alive with HIV, having gone through [recovery from an addiction to crack cocaine], and graduating from a masters program," she said.

It took Williams 12 years to finish her undergraduate degree in sociology, while she was working as a medical secretary at Long Island College Hospital.

She is now one exam away from becoming a Certified Substance Abuse Counselor (CSAC). A survivor of the crack epidemic that gripped urban communities of color in the 1980s, she will launch her career amid an opioid epidemic consuming the white suburbs.

Opiates — a class of drugs that not only includes illicit substances like heroin, but prescription painkillers like percocet and vicodin — were projected as of November to claim the record-setting number of 1,000 lives in New York City in 2016. The city that once waged a war on crack, locking addicts behind bars in response to fears about a spike in violent crimes, is now treating opioid dependency as a public health issue, dispensing anti-overdose drugs over the counter and cracking down on dealers.

► RELATED: How To Save an Opioid Overdose Victim's Life (VIDEO)

Crack and heroin are chemically and physiologically different, too. Crack is a stimulant, giving the smoker an intense but short euphoria.

Opiates are depressants and have a longer high. Withdrawal has not just psychological, but physical symptoms such as nausea and abdominal pain, which make it even more difficult for addicts to quit.

Williams gave up crack for good on May 10, 1992. After cycling in and out of detox facilities for half a decade, she committed to a 28-day program at Methodist Hospital in Park Slope.

"The detox, the rehabs, the counseling, the groups, the motivation and the hope — that’s what got me here," she said. "So I want to be a part of that and give that back somehow.” 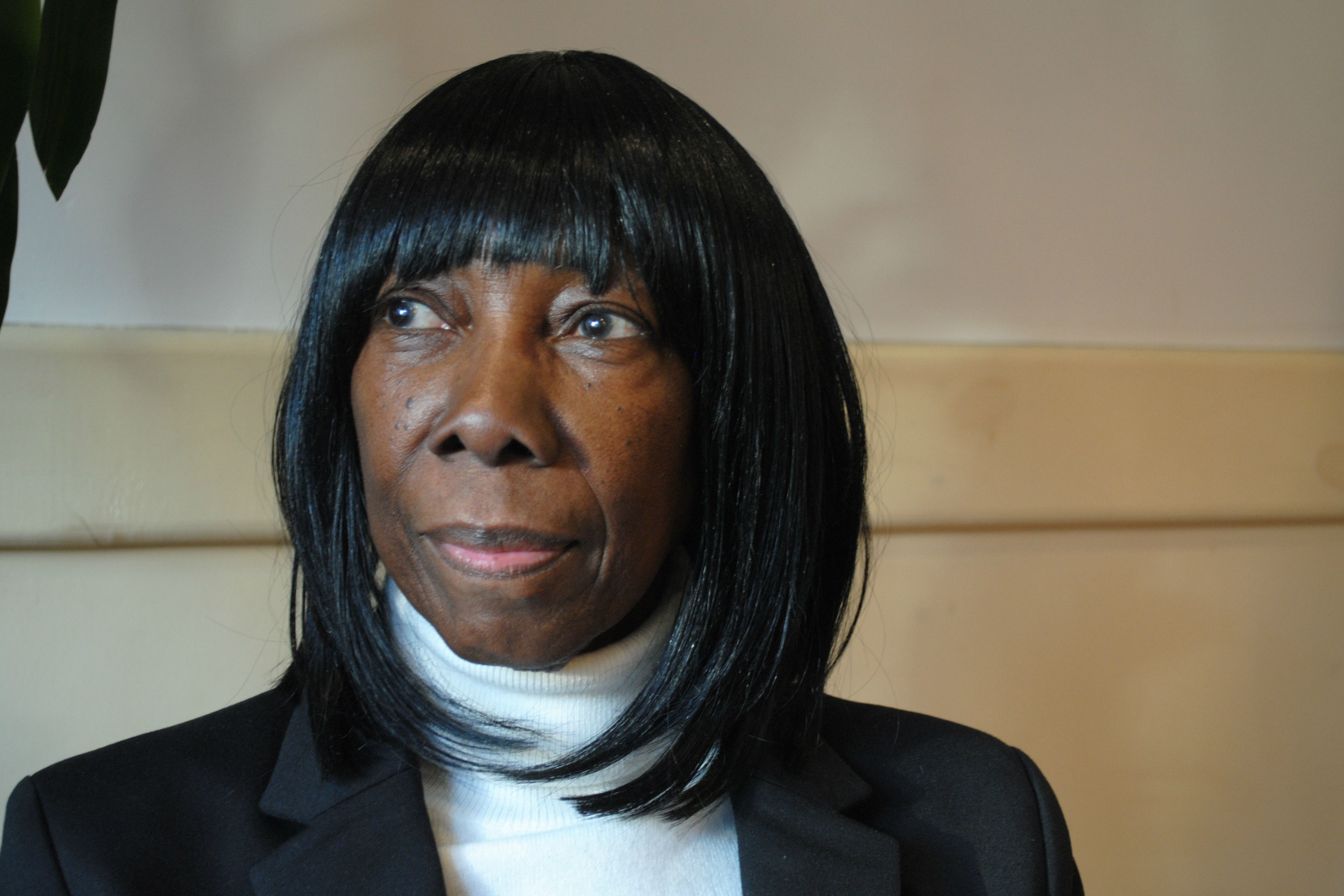 'You don’t find too many people at 74 alive with HIV, having gone through [recovery from an addiction to crack cocaine], and graduating from a master’s program," Williams said. (DNAinfo/Nicole Levy)

During her internships at Hunter, Williams' transparency about her past benefited the patients she worked with, said Michelle Lask, a clinical coordinator of fieldwork placements at the college.

"We teach the importance of meaningful self-disclosure ... to overcome [the client's] own shame about telling their own story," Lask said. "They’re not proud of the things they did to get the drug, what they did on the drug."

Williams, she said, "was a role model, helping minimize the shame and trauma of that."

A Life of Addiction

Cynthia Williams was born on Aug. 17, 1942, to an alcoholic veteran and his numbers-running wife. She grew up in the James Weldon Johnson Houses in East Harlem, on a floor she described as rife with domestic violence.

Williams experimented recreationally with drugs throughout high school and her early working life as a typist. (She had dreams of a white-collar career that were dashed, she said, by school administrators who tracked her education out of a program for college-bound students.)

In her 20s, she dropped paychecks at clubs where dealers distributed powder cocaine on $100 bills, and she moved in briefly with a heroin addict — a man who fathered her son, taught her how to inject or "skin-pop" the narcotic, and enlisted her as a pregnant lookout while he burglarized apartments.

In the '80s a childhood friend introduced Williams — then living in Section 8 housing in Far Rockaway with her teenage son and working as a medical transcriptionist at Lenox Hill Hospital — to crack cocaine.

"I went over to visit her, and we were talking about old times and next thing you know, she introduced me to crack and I loved it," she said. "That weekend, I never got home.”

Shortly after, William's son, a student at Brooklyn Tech High School, walked in on his mother smoking in her bedroom.

"I had the door closed, and I was getting ready to take a hit when he busted in the door," she said, recalling his response. "Oh no! My mother's a crackhead."

He left immediately for his grandmother's home.

She describes that moment as both the "beginning of the end" and "nirvana." Williams sold her son's drum set, his Nintendo, their silverware, even their curtains. Soon, she lost her job and the apartment.

Williams joined her son at her mother's place, but she didn't stop stealing to support her habit and soon wore out her welcome. So she packed a suitcase with the essentials: some clothes, her crack pipe and the scraper she used to clean it.

Williams began to cycle between crack houses and detox facilities, filling the times in between by living on the streets.

“I tried to be a prostitute," she said, "but it didn’t work because I didn’t know how to get the money [before the sexual transaction]."

Williams was nearly as naive about begging, asking for spare change with her hands outstretched until a passerby recommended she use a cup.

In spite of her inexperience, Williams evaded arrest at a time when most addicts were jailed at least once, according to her Narcotics Anonymous sponsor Lindra Ware. It wasn't the criminal justice system, but sheer exhaustion that motivated her to seek treatment.

Williams met her sponsor 19 years ago, when she joined a Narcotics Anonymous group.

Ware coached her through nighttime dreams and daytime urges that might tempt her to use again, encouraging her to leave traumatic events in the past and take accountability for her actions.

"I've messed with her head," said Ware, a recovered heroin addict. As a test, she once offered a jonesing Williams this intentionally unfair trade: $20 to buy coke in exchange for one expensive mink coat. Williams turned Ware down.

More than a decade younger than Williams, Ware set an example by earning her masters of public health at 50. Her second master's degree is in social work, and Ware feels obligated to warn Williams of the challenges ahead.

"Now with this shift that’s coming, with heroin, be prepared," she instructed Williams on a Saturday afternoon earlier this month, when the two women sat down for an interview with DNAinfo New York in the recreation room of Williams' building in Fort Greene.

"I told you all five years ago, heroin is coming," Ware said. "Crack is holding its own, but heroin is once again the drug of choice.” (Heroin was at the center of New York City's drug scene in the 1960s.)

Substance abuse treatment programs have undergone their own cycle in that time, swinging between an emphasis on lived experience and a stress on professional distance, according to Justin Mitchell, director of residential services at Odyssey House, a nonprofit serving addicts in recovery.

Empathy can help a counselor guide her client through the highs and lows of the early recovery process.

"Someone who has had many years of recovery, who goes on to improve their life by going to school and working," he said, "can show that there’s hope and opportunity if you’re able to address this issue that’s standing in the way."

But formal training teaches counselors that they should always have a reason for disclosing personal information, one benefiting their client rather than comforting themselves.

With her personal experience and theoretical studies, Williams may be perfectly poised between the two schools of thought, Mitchell said.

But even though Williams will soon guide those starting their own recovery, hers is a story that continues to unfold. She'll attend the same Narcotics Anonymous meetings that helped her stay on track and work with her sponsor.

When Williams stumbled over remembering her "clean date," or the day she quit crack, Ware warned, ”Those who don’t remember are doomed to repeat."