A crowd of more than 1,000 — one organizer estimated 4,000 people — rallied first in Grand Army Plaza, steps from Schumer's home.

They chanted slogans such as "Get a spine" in between speakers who railed against what they said were Trump's anti-worker and "white supremacist" views. 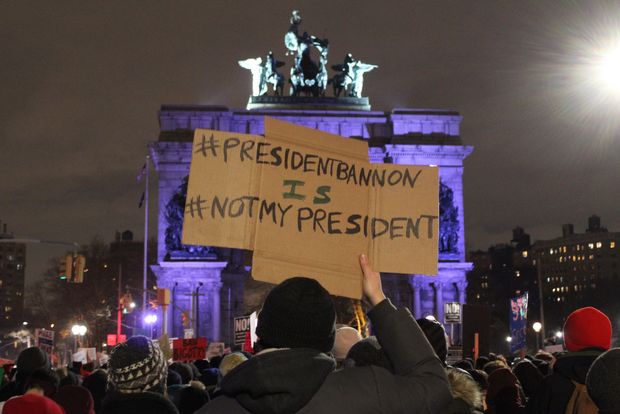 Among them was Peter Landy, a 56-year-old Windsor Terrace resident who said he's never been a fan of Schumer and once confronted him face-to-face on Seventh Avenue in Park Slope shortly after Schumer's vote in favor of the war in Iraq.

"Schumer should take the lead and lead the opposition," Landy said. "So far he's been rather spineless." 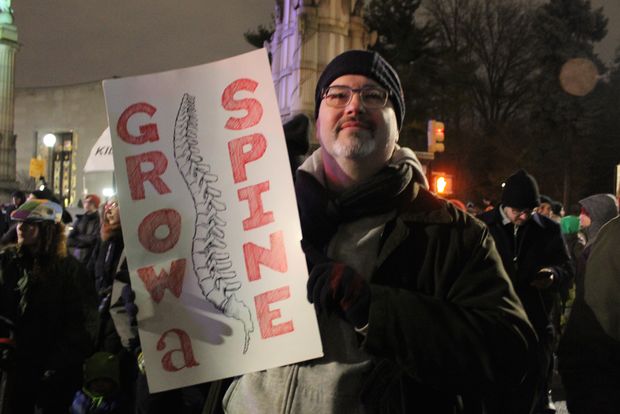 Only about 50 of the crowd were allowed to go directly to Schumer's doorstep to deliver the cardboard boxing gloves and protein bars, while the rest stood across the street on Prospect Park West shouting encouragement as some passing cars blasted their horns. 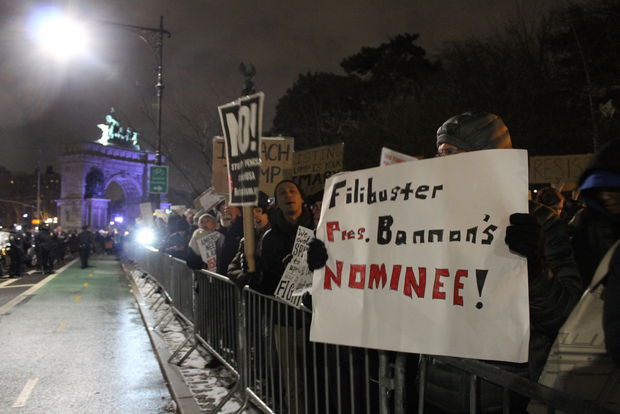 Protesters filled the sidewalk across the street from U.S. Sen. Chuck Schumer's apartment building at a rally dubbed "What the F-ck Chuck?" Photo: DNAinfo/Leslie Albrecht

"It's not a fight that's going to have a hero that swoops in," Fox-Lerner said.

"It's not Captain America punching Hitler in the face. But we all have a choice to make. Every person that comes to a rally is one more person who has their picture taken for the news at that rally. Other people see that and know they're not alone."

Schumer, who was in Washington, D.C. as the crowd gathered outside his building, released a statement Monday saying he plans to vote no on Trump's picks for Secretary of State, Secretary of Education and Attorney General.

Schumer voted in favor of Trump's nominees to head the Department of Defense, Homeland Security and the CIA, as well as Trump's selection for United Nations Ambassador.

"From day one, Senator Schumer made it very clear that he had major concerns with at least eight of the nominees in what he termed, the 'swamp cabinet' of billionaires and bankers," said Marisa Kaufman, a spokeswoman for the senator, on Tuesday evening.

"He fought off the Republican effort to bum rush this group through the senate in one fell swoop, and instead forced a series of hearings to more fully question them and examine their records and their conflicts of interest," she added.

"As a result of these hearings and their positions, which are so contrary to core values, he will oppose all eight, as well as others who don't sufficiently answer deep concerns about the president's egregious executive orders."

Activists can now make fighting the new president's policies part of their weekly routine at rallies dubbed #ResistTrumpTuesdays. There were 120 such events nationwide on Tuesday, according to organizers with Working Families Party, People’s Action and MoveOn.org.

The rally’s co-organizer, Elizabeth Zeldin, said she was thrilled by the strong showing and enthusiasm of the crowd.

"We are really hopeful that this rally, combined with the many other rallies, phone calls, and letter campaigns that have been happening this week will encourage Senator Schumer to not only strengthen the resolve he has recently been showing, but to sustain it for the long fight ahead," Zeldin said.

While claims have circulated online — and since been debunked — that financier and philanthropist George Soros has paid for anti-Trump protests, Zeldin said her Resist Trump New York group had no support from Soros or anyone else. She and her co-organizers spent a few hundred dollars of their own money on sign-making materials, a generator, permits and megaphones, she said.