NEW YORK CITY — When Cindy Joseph’s 3-year-old son started throwing tantrums, her response was to press him for an immediate explanation.

Then she started applied a strategy she’d learned at Joel’s school: waiting for his meltdowns to run their course before intervening.

Recently, Cindy and Joel had a breakthrough moment.

Joel had deployed his words — not just his behavior — to express the way his mother’s forbidding him to use the family computer made him feel.

“So I told him not now, later on,” Cindy continued.

She said Joel understood and assented.

Cindy is a participant in an early childhood program called ParentCorps, designed by experts at NYU Langone’s Center for Early Childhood Health and Development with the intention of helping parents build a toolkit of strategies that may solve behavioral problems at home, while helping teachers reinforce those strategies in the classroom.

Its objective is to instill in the city's youngest and most vulnerable students the social and emotional skills that it maintains will translate into success years down the road.

Launched in 1998, ParentCorps is coming in some form to an estimated 350 pre-K programs as part of the city’s ThriveNYC initiative to support the mental health of all New Yorkers by 2018.

Principles and administrators at these programs will take the lead in creating a "culture that supports and values family engagement and families and also social-emotional learning," said Dr. Laurie Brotman, a pioneer of the ParentCorps model in central Harlem schools and a professor of early childhood development at NYU School of Medicine.

But it’s the voluntary participation of parents like Cindy Joseph that will make the program effective, according to Brotman.

"We’re called ParentCorps because we really do believe that parents are central to everything and there is overwhelming evidence from our own work and many people across the country that parents are critical to children’s development,” she said.

Kids may spend an average of 35 hours a week at school, but their parents remain their “primary role model,” said Dr. Stephanie O’Leary, a Westchester-based clinical psychologist with experience in early education but no involvement in ParentCorps. ”So it’s important for teachers to be setting expectations and helping a child learn good life skills, but when a parent also chimes in and echoes that message, it just holds more weight for the child.”

On a Wednesday morning at Park Slope North, seven mothers and two babies gathered around a table stocked with scrambled eggs, fruit and croissants in the teacher’s break room for the penultimate session of a 14-week course. 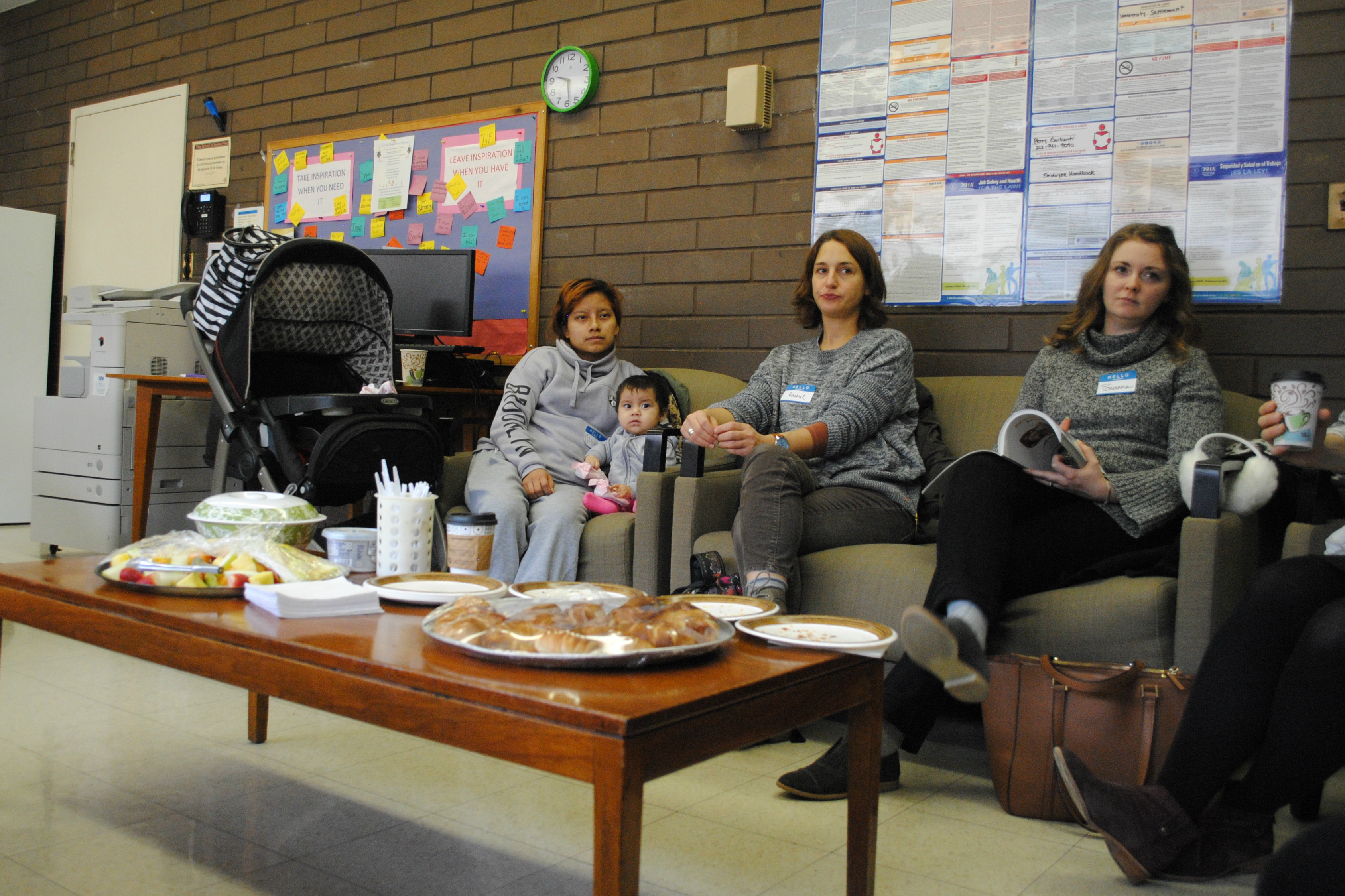 They discussed ways of helping a child manage her feelings, using the acronym FEEL — “Focus on the feeling, Explore possible solutions, Empower your child to make a choice, and Let’s talk about how it went" — that group leader Sair Goldenberg had explained to them.

One mom said she had tried deep breathing with her daughter, who sometimes found it soothing when her mother placed on her hand on her chest.

”Does the breathing work with all children?” asked another mom, whose sons hadn't responded to the coping mechanism.

”Does anything work with all children?” a third pointed out.

The observation prompted Goldenberg, an assistant director of clinical and family services at University Settlement, the nonprofit that runs Park Slope North, to remind the women of two central ParentCorps tenets: “Know thyself and know thy child."

“Some strategies that we present here are going to work for your children, and some may not work right away, so we invite you to try them again," she said, encouraging them to scrap whatever isn't working.

Inviting parents to set the parameters of discourse is crucial for a program that seeks to reduce early learning disparities between students of different cultures and socioeconomic backgrounds, and ease environmental stressors on children who live in low-income urban neighborhoods.

“Our whole approach is to give parents opportunity to reflect on their values and beliefs, and articulate them for themselves,” Brotman said. “One’s belief and values — that’s what drives behavior and behavioral change.”

While one family may value respect for one’s elders above other qualities, another may treasure an independent spirit, she explained.

Brotman's program introduces parents to practices, like deep breathing, that research and time have shown to effectively instill new behaviors, while acknowledging they may not work for everyone.

ParentCorps’ sensitivity to culture and individual needs appeals to Bonnie Cohen, who works with Asian, Latino and Afro-Caribbean families as the director of University Settlement’s three early childhood centers around the city, but she also appreciates the universal language it installs in classrooms and homes.

Cohen brought ParentCorps to University Settlement five years ago because, she said, it provided “training for everybody in the building to speak with the same language... a common language for how children need to thrive."

At schools like Park Slope North, ParentCorps coaches instruct and mentor teachers in a curriculum that emphasizes the importance of emotional and behavioral self-regulation skills and positive behavioral reinforcement. They also prepare social workers like Goldenberg to lead parent groups practicing the same concepts.

The anticipated result is a predictable, nuturing environment offering models for good behavior, instead of discipline, that can change children’s behaviors for good, O’Leary said.

“The more consistent the message is or the behavioral expectation is then the more deeply encoded that will become in the child’s neural networks as they develop,” she said.

And in ParentCorps, Goldenberg said, positive feedback is seen as “increas[ing] positive behavior, because as we know, children will do anything to get our attention… and if they don’t get it in positive ways, they’re going to find ways to get it with misbehavior.”

At school and at home, kids whose pre-K programs are involved in ParentCorps hear the same messages about where their voices land on the “volume meter” and which items on their plate are “Whoa!” and “Go!” foods, and they use the same adjectives for their feelings: “mad,” “sad” and “scared.”

When Joel told Cindy he was “mad,” he was following instructions from a chart that hangs in every ParentCorps classroom. 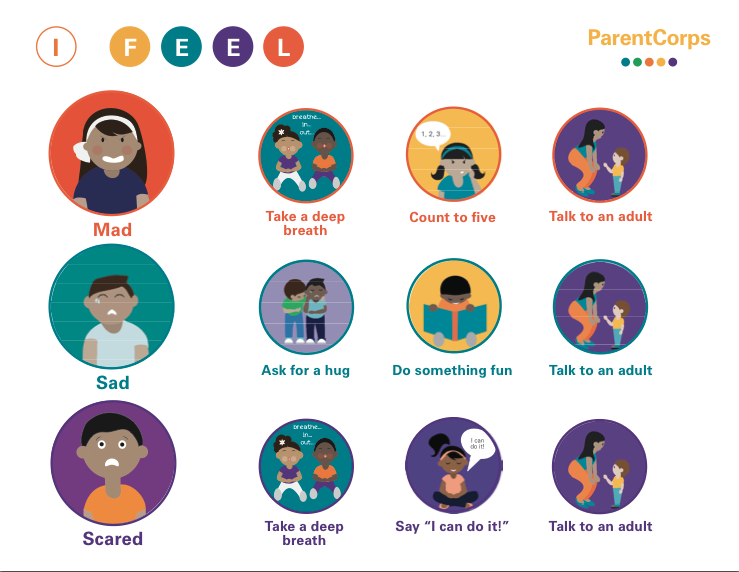 The “I Feel” visualization is one tool the program uses to teach children how to identify and manage their emotions — a skill some otherwise wouldn’t learn until adolescence or adulthood.

That kind of educational agenda is, in O’Leary’s opinion, “the missing link in our education system.”

“So many kids grow up thinking I’m the only who’s anxious or embarrassed or frustrated,” O’Leary said. “These integrated social-emotional curricula, they just normalize it and say,’Yeah, everybody feels crappy sometimes, this is what you can do about it.’”

A child who feels like he can express his emotions is less likely to act aggressively or impulsively in the classroom, and he's more likely to concentrate on the subject material at hand, Dr. Brotman said.

Those behavioral changes have quantitative results, according to data collected by ParentCorps' creators.

Children who participated in ParentCorps in pre-K had lower levels of mental health problems and higher teacher-rated academic performance in the second grade compared to their peers, according to the group's analysis of a three-year program trial in 10 New York City elementary schools serving a primarily low-income, black student population from 2005 to 2008.

That evidence was enough to convince the city's Department of Education to grant ParentCorps a three-year contract — for $13.8 million, according to an agency spokeswoman — to expand its programming beyond the 19 public schools and six early childhood centers where it currently operates.

But the ParentCorps model isn't perfect, a fact its developers embrace by consistently updating it.

At Joel's school, where roughly 130 students qualify for ParentCorps intervention, no more than 12 parents participated in the most recent cycle of workshops.

"From our own work, we’re clearly showing that kids do benefit from a school with ParentCorps even if their parents don’t participate," Dr. Brotman said, "but by far the most significant impact is for kids’ whose parents do participate, especially for kids who have low-regulation, or behavioral problems, or any challenges to learning and behavior. It requires everybody.”