A group of about 100 protesters braved frigid temperatures outside Schumer's building at 9 Prospect Park West on Sunday afternoon to chant "Not one inch" to urge Schumer, who is now leader of the Senate Democrats, to stand firm against Trump's cabinet picks.

"We see Schumer primarily as an ally," Dunlea said. "We're just trying to encourage him to be more aggressive on these issues. It's not like we're protesting Schumer — we're urging him to be stronger." 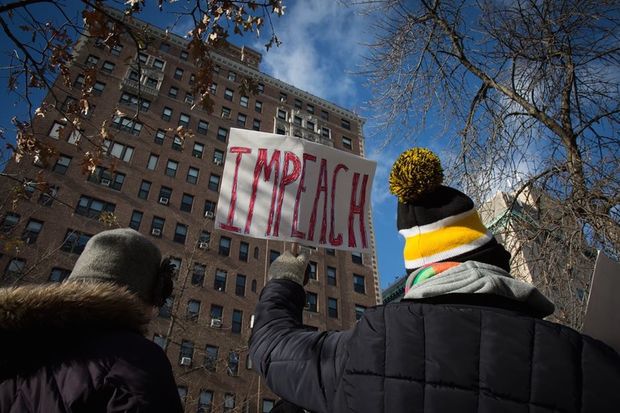 On Tuesday, roughly 150 to 300 activists under the umbrella Resist Trump Tuesdays visited the building, many with kids in tow.

Among them was Elizabeth Zeldin, who described herself as "just a regular old Brooklyn mom with a full-time job who's gotten very angry." Zeldin said visiting Schumer on his home turf, where he "feels most comfortable" seemed like the right move, given the urgency Democrats feel around opposing the incoming president.

"[Schumer] is in Brooklyn in the middle of one of the most liberal enclaves in the country and he lives there," Zeldin said. "He needs to understand that people who voted for him for numerous voting cycles really have this strong feeling. Bringing people into Midtown Manhattan [to protest at Schumer’s office] doesn't have that same power. It’s his neighbors, who really care about this issue deeply."

Park Slope — where 91 percent of voters chose Hillary Clinton and 5 percent voted for Trump — is home base for several politicians positioning themselves against Trump: Schumer, Mayor Bill de Blasio, and City Councilman Brad Lander, who launched the #GetOrganizedBK effort shortly after Trump's election.

► RELATED: How to Get Involved in Your Community

Adam Baran, who helped organize the Not One Inch protest, said he and his co-organizers were inspired to visit Schumer's building by the Indivisible protest guide, which explains how to use the same tactics the Tea Party did against President Barack Obama's agenda. 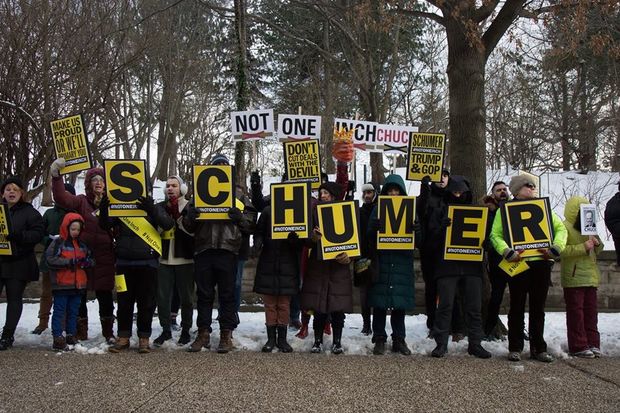 "To boil it down, the idea is that if the left really wants to be successful in obstructing Trump, they need to take those same tactics, because they work," Baran said. Going to Schumer’s house was meant to create a “galvanizing moment,” he said.

Though the protest drew only about 100 people, Baran said he felt like it had an impact. The day after the rally, Schumer sent Senate Majority Leader Mitch McConnell a copy of a 2009 letter in which McConnell demanded a thorough vetting of Obama appointees. Schumer said he wants Democrats to get the same ground rules for Trump's picks.

"Mr. President, if there is any group of cabinet nominees that cries out for this process, it's this group of nominees," Schumer said on the Senate floor on Tuesday. "This proposed cabinet is unlike any other. It is wealthier than any other. It has a complex web of corporate connections."

Baran called Schumer's move with the McConnell letter "a wonderful stunt," adding, "That's what we wanted."

A spokeswoman for Schumer declined to comment specifically on the protests at his residence, but pointed to actions he's taken this week such as sending the McConnell letter.

There are no immediate plans for future rallies at 9 Prospect Park West, but protesters say they'll gladly return.

"We're watching him," Zeldin said. "We want to see that he does the right thing and if he doesn’t, we’ll be out there again."