Life-sized models of skulls — traditionally symbols of our own mortality — are helping save New Yorkers' lives.

An in-house 3-D printing lab at Mount Sinai Medical Center on the Upper East Side is turning out one-to-one scale models of skull-base tumors, curved spines and other problems for doctors performing complex surgeries.

Physicians use the 3-D models made of layers of powder bound by colored glue to determine the least invasive procedure for a particular case, practice techniques in advance of an operation, and educate their patients, who can actually hold replicas of their body parts in their own hands.

This is how the process at Mount Sinai, which launched its Medical Modeling Core lab last January but announced it in December, works:

► A physician comes to the modeling team with an MRI or CT scan of a patient's head.

”It’s actually quite difficult to determine how exactly things are going to go [in the operating room] just based on 2-D radiological scans," said Anthony Costa, scientific director of the Neurosurgery Simulation Core at Mount Sinai's medical school. "In many cases, it’s impossible to know whether or not your tool is going to fit into [a given] space.”

► Costa's team sits down with the doctor to discuss which features of the patient's anatomy the replica should include.

"You can spend a lot of time getting every part of the anatomy exactly perfect," Costa said, "but, from a practical perspective, that’s not a good approach, because you’re reproducing things that just don’t need to be reproduced to get the answer that you want at the other end of the equation.”

For example, in the case of a patient with a tumor in the base of his skull, lab engineers and doctors decided the model shouldn't replicate a complete skull, but should incorporate nearby blood vessels and nerves at risk of being severed during a surgical procedure.

► The team then designs a virtual model using custom software. This step can take as little as an hour to complete.

► Next, the scientists send the model to a 3D Systems ProJet CJP 660 Pro in the hospital's basement Rapid Prototyping Center, a more than 6-foot-wide and nearly 6-foot-tall printer that builds the replicas out of various plastic materials, layer by layer. The printing process takes between six and eight hours.

The entire process can be completed within 72 hours, Costa said.

If the technology that makes this all possible sounds pricey to you, you're right: a single printer can cost a hospital anywhere between $80,000 and $100,000. It's one of the reasons — alongside a lack of institutional expertise and knowledge and limited reimbursement from insurance — why 3-D printing is only just starting to influence the practice of medicine in New York City. (Doctors at hospitals without a printer can also outsource their printing projects to companies like 3D Systems.)

Despite the upfront costs, Medical Modeling Core charges roughly one tenth of what an outside manufacturer would, Costa said.

"We use those tools, but we don’t actually make money," he said. "The goal is to get [these models] into physicians' hands so they can improve their patient care. If we’re charging a market rate ... something like $5,000 a model, that’s prohibitive, whereas $500 a model is approachable for most physicians in their daily practice.”

Here are three examples of 3-D models made at Mount Sinai — all for New York City residents— and the ways in which doctors used them:

A patient's skull and carotid arteries 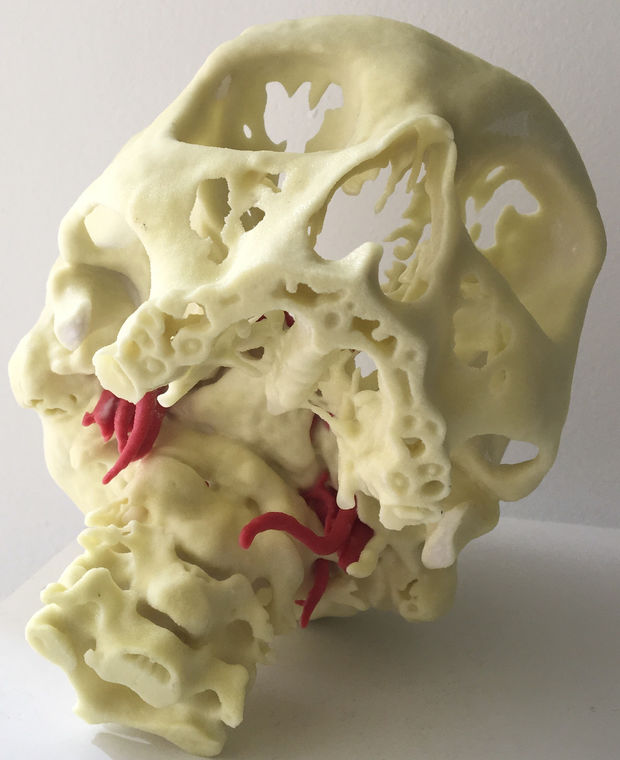 Doctors used this model of a patient's skull and neck to plan the trajectory of a procedure in which they intended to enter the patient's body through the nose to reach the spine.

Typically, doctors would have drilled right through the patient's left carotid artery, which delivers blood to the head and brain, had the model not shown them that this particular patient's blood vessel was not in the usual location — falling in the center of the neck instead of on the side.

The doctors came up with alternate surgical plans as a result. Any identifying details about the patient or the outcome of the surgery were withheld to protect the patient's privacy. 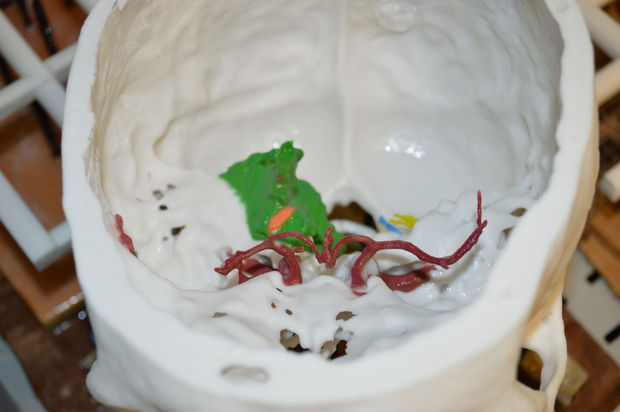 Costa's team printed this model for surgeons preparing to remove an epidermoid tumor — which can impair vision and hearing and cause such symptoms as seizures, fever, neck stiffness, headaches and facial pain — at the base of a patient's skull.

As the print shows, the tumor (seen here in green) was embedded amid blood vessels (red) and the cranial nerves that give your face the ability to move your facial muscles or feel sensations on your face.

"When you’re removing a tumor, you really, really don’t want to hurt those if you can manage,” Costa said.

A patient's skull and brain tumor 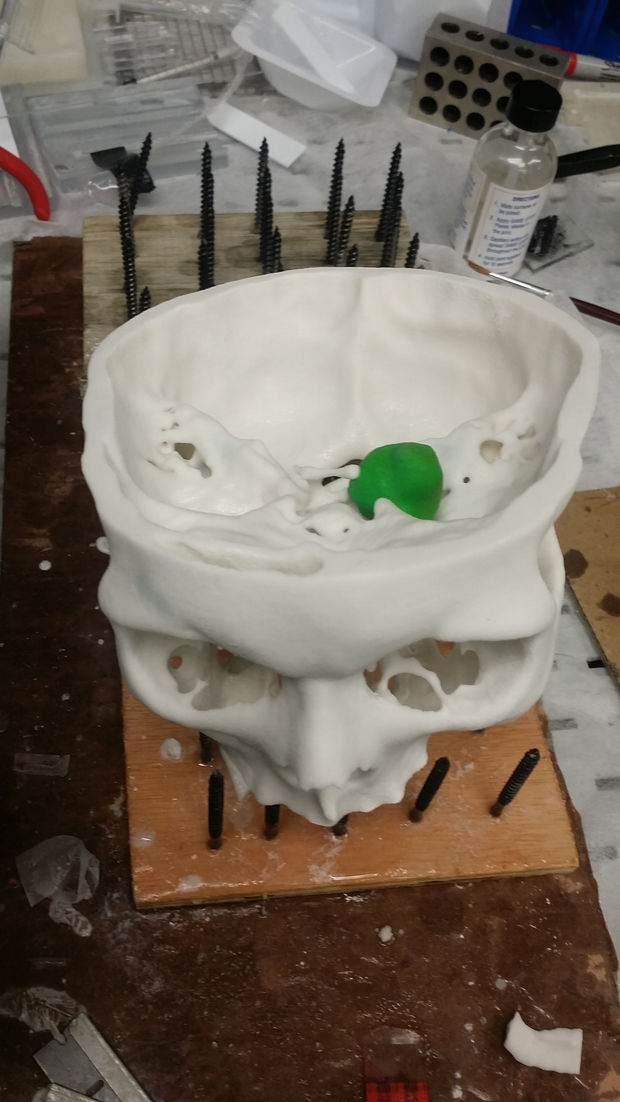 Mount Sinai physicians used this model to practice a tumor-removal procedure with their surgical instruments, such as the endoscopes used to view internal body parts.

"We print the skull base and the various sinuses and whatever pathology is involved," Costa said of his work with ear, nose and throat doctors, "and if they’re doing an endoscopic procedure, they’ll take the endoscope and literally thread it through the model ... so they can see what angles are involved.”